All of these ‘Golden Week’ tours so far have been between four and five days in length. We can do this because in May, there are a string of three public holidays in Japan that often line up to allow for a nice long break: the wonderful ‘Golden Week’.

This year’s Golden Week was extra special though. By taking two working days off, it was possible to string together a full 9 days of holiday. We decided that this was our chance to explore a part of Japan that we’d never been to before: Aomori Prefecture.

Haidee and I have lived in Hokkaido, the northern most island of Japan, for over five years now. For at least three of those years, we’ve made sure to get away during ‘Golden Week’ for a short cycle tour.

All of these ‘Golden Week’ tours so far have been between four and five days in length. We can do this because in May, there are a string of three public holidays in Japan that often line up to allow for a nice long break: the wonderful ‘Golden Week’.

This year’s Golden Week was extra special though. By taking two working days off, it was possible to string together a full 9 days of holiday. We decided that this was our chance to explore a part of Japan that we’d never been to before: Aomori Prefecture.

Aomori Prefecture is the northern-most prefecture on Japan’s largest island of Honshu. The name literally means blue forest, and gives the reader of Japanese characters the image of lush forests and blue seas. For the most part, however, the whole prefecture was a blank space on the map for us. We had no idea of what the place offered in terms of scenery, people, and environment.

So today, Friday the 29th of April (also a public holiday), we made the trek down to Aomori by ferry from Tomakomai City to Hachinohe City, in order to start cycling in earnest the next day.

We had booked a room on the Silver Ferry, departing Tomakomai Port at 9:30am. We were told to make sure to be at the terminal at least 1 hour before departure, with our bikes ready to board. Since we live just 25km north of Tomakomai, we decided we would leave early on Friday morning and cycle to Tomakomai.

The good news for our cycle to Tomakomai was that we had a stiff tailwind. The bad news was that it was cold and raining. The 25km dash along part of the most ugly stretches of road in Hokkaido (the busy Route 36 linking Sapporo and Hakodate) would be simply a case of getting from A to B.

We were packed up and out of the door by 6:15am. Excited to be hitting the road and heading out on a bike ride to somewhere new. 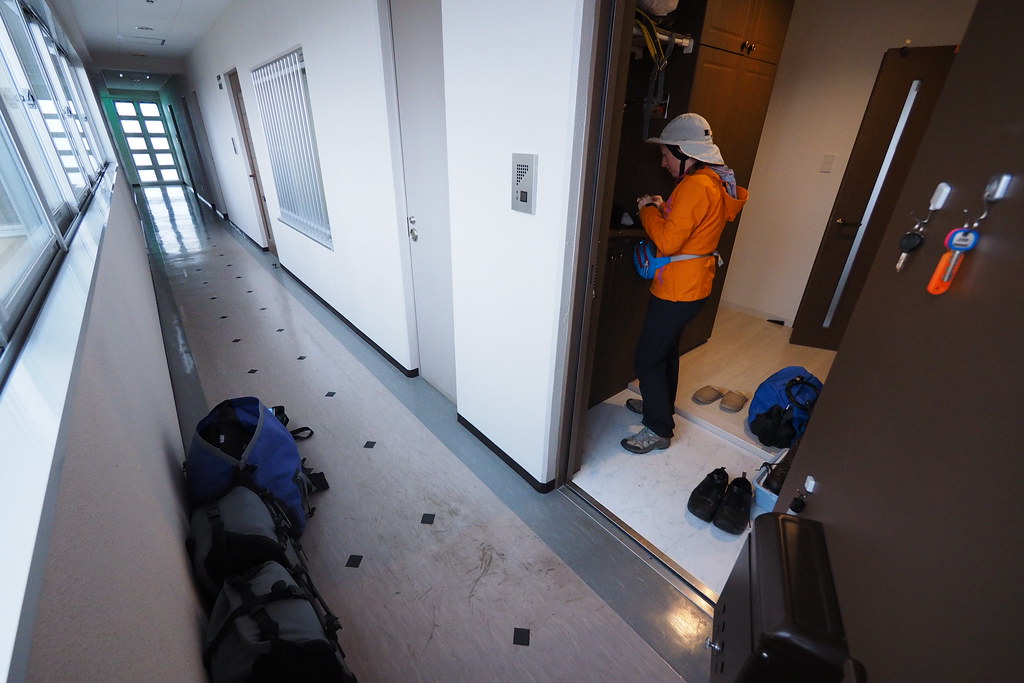 We were glad to have our bar mitts still on our bikes…it was all together a heads down feet to the pedals ride for the most part. 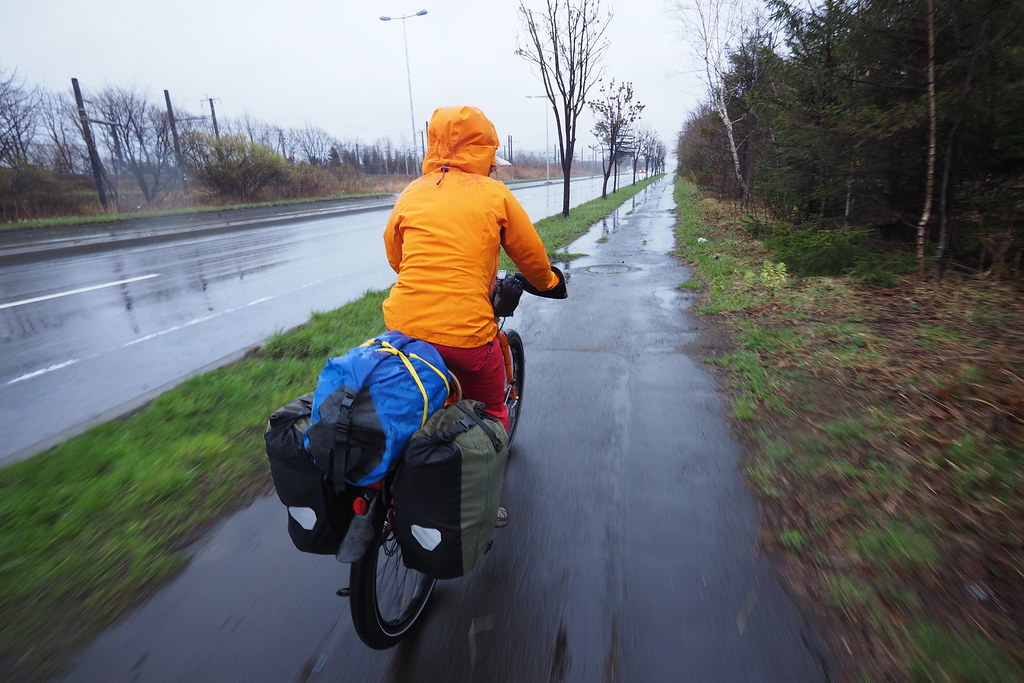 Our only significant stop for the ride was in Numanohata, just 8km from the ferry terminal. We stopped in at a Seven Eleven convenience store to down some coffee and warm up a little. Our feet were soaked. 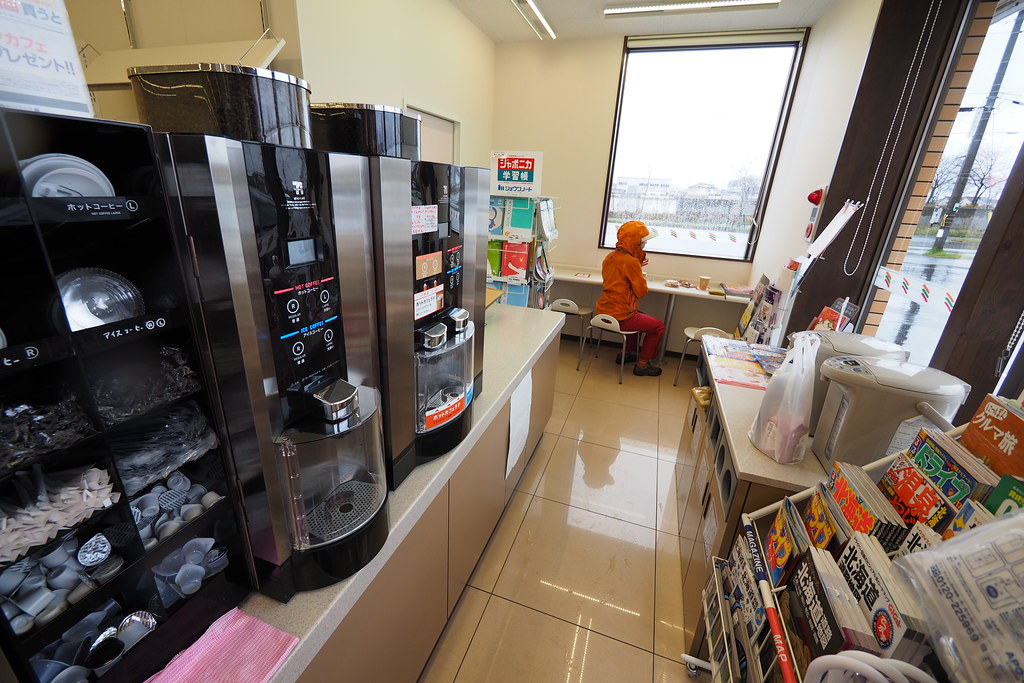 Once at the ferry terminal, we checked in (easy if you have the form printed out from your booking) and sat in a heated waiting area, trying to warm up. Our call to board came at around 9am. I was slightly miffed that we had to push the bikes onto the ferry, rather than being able to cycle them on. Oh the indignity. 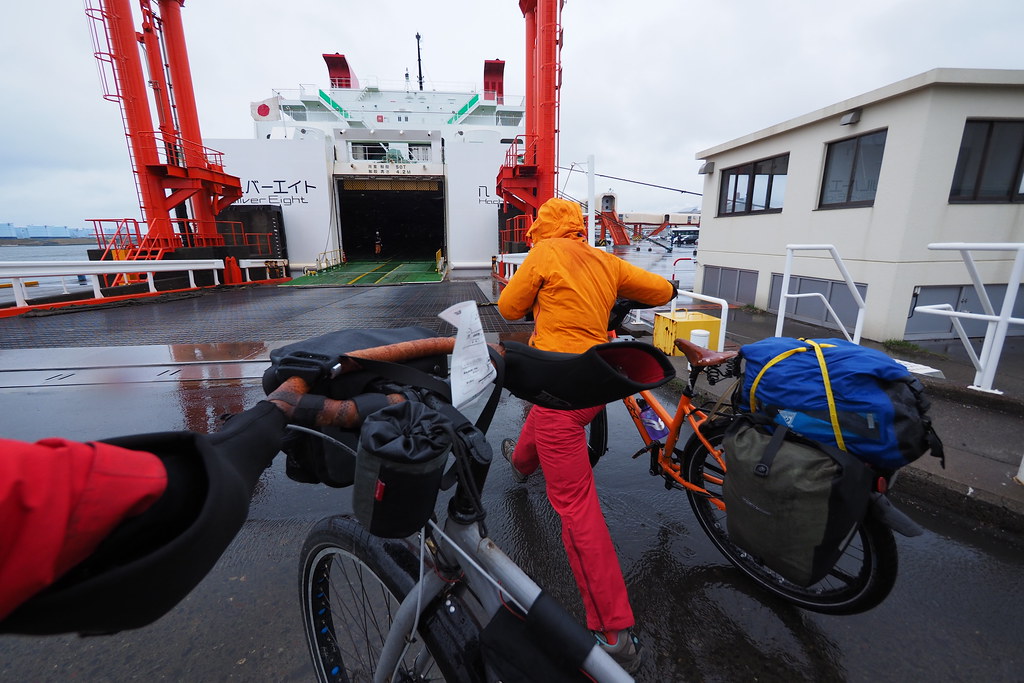 With our fairly busy day-to-day commuting lifestyle (we both commute over an hour each way to work each day), we decided to make this ferry ride as comfortable as possible. So we had booked a first-class cabin for the 8-hour ferry ride. Including the bikes, this works out to be 11,000yen each, each way. The extra room to hang wet clothes and dry out wet panniers was worth it though. As was being able to sleep with the lights off and curtains pulled. We both slept at least 4 hours of the trip. The ferry interior was modern and new. 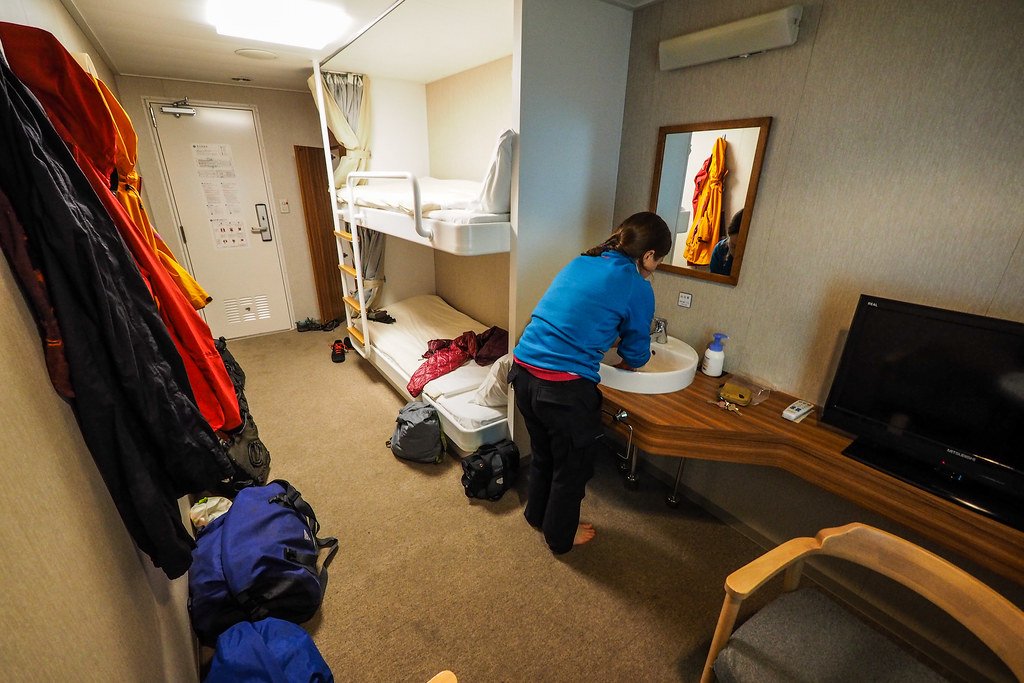 The best part of ferries in Japan, of course, is the on-board ‘hot-springs’. On the Silver Ferry, this consisted of a communal bathhouse with 10 shower stalls, and a large, piping hot bath. This was my first destination after we had organized our room. The perfect antidote to cold feet and hands after a rainy, gritty ride to the ferry terminal.

After a fairly smooth, uneventful ferry ride, and happening to stumble upon and watching a screening of Outbreak (1995) on the TV, we arrived in Hachinohe at 6:30pm. Haidee had booked us in at the cheap and cheerful Hotel Select Inn next to Honhachinohe Station for the night. For just over 3,000yen each for the night (including a decent breakfast), it was a good value overnight stay.