Big day and lots of climbing. That seems to summarise today quite nicely. But in reality, the first 80km or so was mostly downhill, and mostly on a beautiful cycling path following the Ishikari River. Once again I was warned of bears, but saw no sign of them. Except this sign *guffaw*.

Big day and lots of climbing. That seems to summarise today quite nicely. But in reality, the first 80km or so was mostly downhill, and mostly on a beautiful cycling path following the Ishikari River. Once again I was warned of bears, but saw no sign of them. Except this sign *guffaw*. 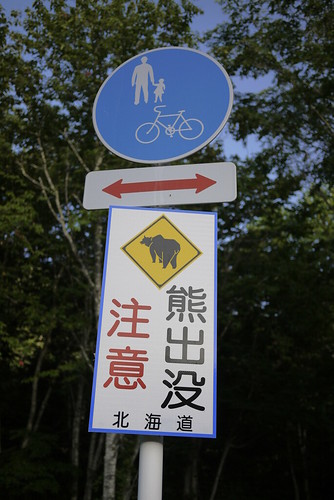 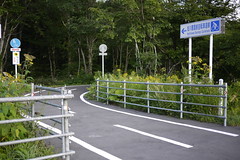 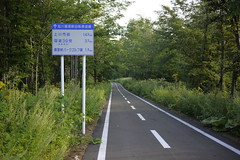 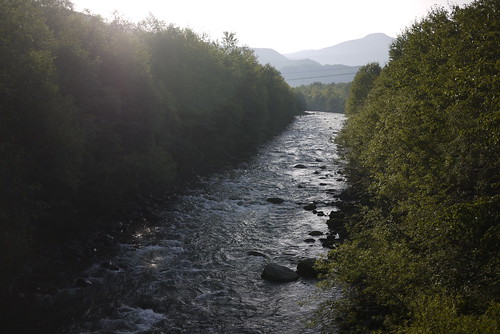 And where it has been tamed by human intervention, the results are not at all unpleasant. It seems that north of Sounkyo, the main agricultural staple is rice.

The Ishikari River cycle path quite conveniently injected me into the guts of Asahikawa City – the second biggest city in Hokkaido. I quickly found my way out of the city, and headed towards Biei. Unfortunately, I had to spend close to an hour with bumper-to-bumper car traffic before I could sneak off into the hills again. 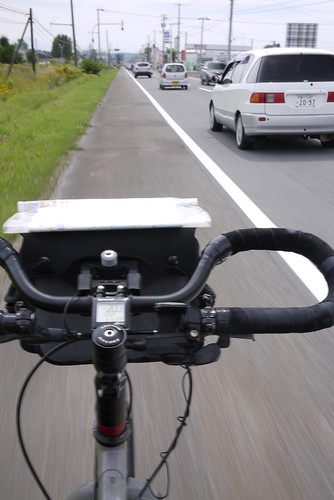 The hills I am talking about are those that Route 452 cuts its way through. Or at least mostly cuts its way though. Route 452 is about 150km long, but has one section that is not open to traffic. I thought this might mean that a sneaky cyclist might be able to cycle through said closed road. With that in mind, I headed towards the ‘road-closed’ sign on my map.

Once off the main drag, I was again in farming-land. Road-side stalls (with honestly-boxes) abounded, with tomatoes, zucchini (courgettes), and potatoes in season. I dropped in on a couple and bought some massive tomatoes, munching on them as I grinded up the uphills. 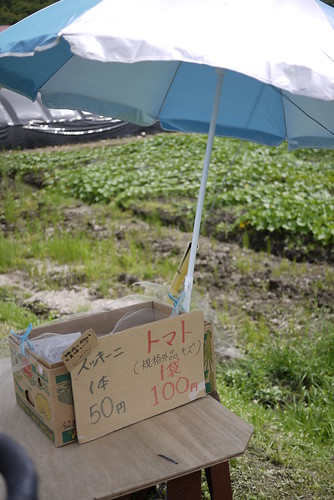 Among the stalls was also this one below. They’re selling rhinoceros beetles. Big, fat, gorgeous beetles, as big as your thumb. 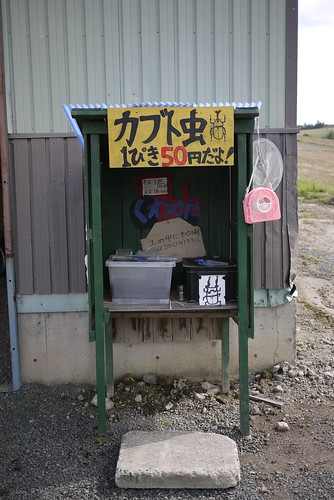 And no, they’re not for eating. They are for playing with and holding and poking and having. The lower sign in the photo below says: The beetles burrow into the dirt. Dig around and look for them. 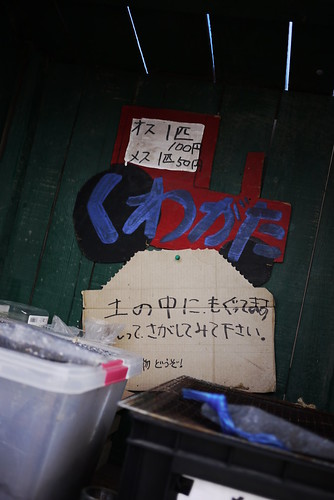 Views at the tops of the small rises in the road were Hokkaido farmland through-and-through.

Soon enough I came to the road-block on Route 452 indicated on my map. I was excited to see pavement beyond the gate, so I carried on through. To my dismay, however, the road ended completely and utterly 2km beyond the gate. There was nothing but forest. Not even a foot-track. At least the 8km or so back the way I came was downhill.

This did, however, open up the excuse to do the gravel section of Route 70, which connects Biei and Ashibetsu. The gate, by the way, is for the winter, when the road is closed due to snow.

The gravel road climbing was fine, except for the horrid horse-flies. Wikipedia tells me that there are lots of different kinds of horse-flies (https://en.wikipedia.org/wiki/Horse-fly), but I think the ones here in Hokkaido (abu – アブ) are similar to ‘clegs’, in the sense that they ‘fly quietly and bite with little warning’. I have been wearing a 150-weight Icebreaker merino longsleeve top during this trip, and the flies can bite through it. This means that the horrible blighters can fly quietly onto my back as I am slowly inching up a pass, and bite me before I even know they are there. Mercifully, they don’t seem to like colder temperatures, so the higher one gets up a pass, the fewer of them there are. 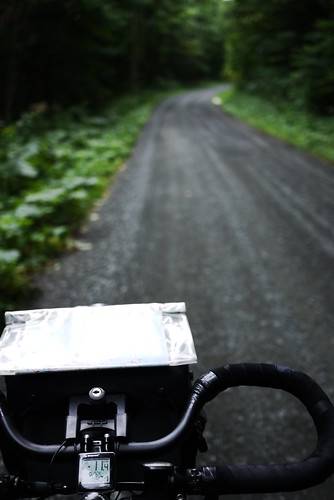 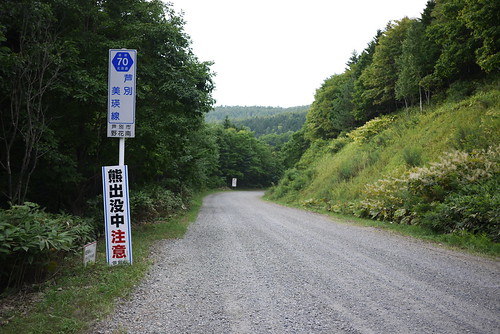 The gravel on this route was a little looser than previous days, but the extra float of the wide Big Apple tyres helped to no end.

I finally arrived in Ashibetsu at around 5:30pm. I opted for the upclass Ashibetsu Kenmin Center Autocamp, because I wanted to do some laundry. I was expecting to have to pay 1,350yen, but as a cyclist, they charged me off-season daycamper rates (470yen). The only catch was that it was 8km up a hill. At least I would have a downhill to start the day tomorrow…

1 thought on “Abashiri to Sapporo Day 3: Sounkyo to Ashibetsu”