Sometimes the stars align and your younger brother you've not seen in a year comes to Japan for the weekend. When that weekend is the summer solstice, there's only one way to celebrate: get him on a bike and take him to one of the most pristine lakes in Hokkaido for a camp-out.

There is a rabbit-warren network of gravel forestry roads between Chitose City and Lake Shikotsu that beg to be explored. We’ve cycled the one outlined in this route guide a couple of times, as well as one slightly to the south (route guide here).

Cycling the routes west to east is the preferred direction (i.e., Lake Shikotsu to Chitose), because that’s all downhill. The gravel can be quite coarse at times, but gravity makes it super fun.

In this route guide, we approach Lake Shikotsu from Chitose City via the beautiful (and paved) Chitose-Shikotsu cycleway, and return to Chitose via the forestry road. It was a perfect opportunity to make the most of good weather, so we took camping gear and camped at Morappu Campground at the eastern end of the lake.

Generally it will take a leisurely 2-3 hours from central Chitose City to the lake. Bank on about 1.5 hours on the way back.

Explore the official Japan topomaps online for the area around Morappu Campground here. Follow these instructions to print out the area you would like as a hardcopy.

The gravel roads in the area are not patrolled, so make sure you have some means of contact or emergency notification should anything go wrong.

Morappu Campground is 5km from the nearest onsen, Lake Shikotsu Kyuka-no-Mura (支笏湖休暇の村, here). We also recommend the very up-market Mizu-no-Uta onsen (水の歌, here). Their 2,000yen buffet lunch and onsen set is a pretty good deal, so consider booking ahead and treating yourself.

Chris didn’t travel all the way from New Zealand just for a weekend in Hokkaido (although that certainly would not have been a waste of time). He happened to be in China the week before, and had a stop off in Tokyo on his way back to New Zealand. He made the 1.5 hour flight from Tokyo to Sapporo on a Friday night, and we had a full two days to explore.

We are fortunate to live in Chitose City, only 25km from Lake Shikotsu. Lake Shikotsu is a caldera lake, and is one of Hokkaido’s deepest lakes. Best of all, there is a perfectly paved cycle path all the way from central Chitose to the lake, winding its way through cool forest. We packed up some camping gear on Saturday morning, and were out the door by 11am.

We put Chris on my Tern Verge S27h folding touring bike. His first reaction upon riding it before we set off was that “it looks like a kid’s bike, but it doesn’t ride like one!” That pretty much sums up the Tern Verge S27h. Looks are deceiving.

That said, I think for him (height: 183cm), the stock 6° handlepost (350mm length) would be better replaced by the 12° version (http://premiumbikegear.com/product/tern-physis-3d-t-bar-handlepost/). For me, the 6° version provides acceptable effective top-tube length, although perhaps a little longer would replicate the cockpit feel of my bigger bike (a Surly Karate Monkey, converted for touring).

That said, any intricacies in geometry were largely lost on Chris as he well and truly put the bike through its paces. On road…And off-road…

The Chitose-Lake Shikotsu cycle road is a completely separated cycleway, which I have written about previously (http://www.14degrees.org/lake-shikotsu-to-chitose-cycling-road-cycle-path-in-hokkaido/). This was the first time we had taken the trip on from the Chitose City end. The previous few times we were going the other way, downhill to Chitose. While the other direction – from Chitose to Lake Shikotsu – is a climb all the way, the gradient is always very gentle.

We arrived at Lake Shikotsu at around 3:30pm, whereby we went straight to the Kyuka-no-mura hot spring for a soak. It was my first time to share a Japanese hotspring experience with my brother. It was mildly weird.

Hotspring formalities over, we tracked down a feed of local kokanee (sockeye) salmon, and made it to Morappu Campground on the southeastern side of Lake Shikotsu just as the sun was setting. I went for a swim. It was properly cold.

We were taken aback at how many campers were there. On all our other trips (either later or earlier in the season) we’ve often been the only ones camping. Tonight, it was like tent city. Like most Japanese campsites, however, the mobs were subdued and orderly.

Day broke the next morning (at just before 4am) clear and warm. Most campers were rousing themselves at around 6am. By 6:30am, the tent city was positively heaving with activity. Barbeques were being stoked, kayaks paddled, and children encouraged to explore the shoreline. We had managed to put our tents up in a clear space towards the northern end of the campground.

We didn’t get away until just after 10am…it was just too idyllic.

There was only one other cycle tourist at the campground that we knew of. And it happened to be Kumiko, someone I’ve met by chance on two other occasions while either attending bicycle-related events or cycle touring. Kumiko has only ever owned one bicycle in her life, and that is the Surly Pugsley she is riding now. When I asked her what it was like to cycle on pavement with the bike, she explained that she’s not got anything to compare it to, so it feels just fine. The frame bag and other packs attached to the bike are all home made. 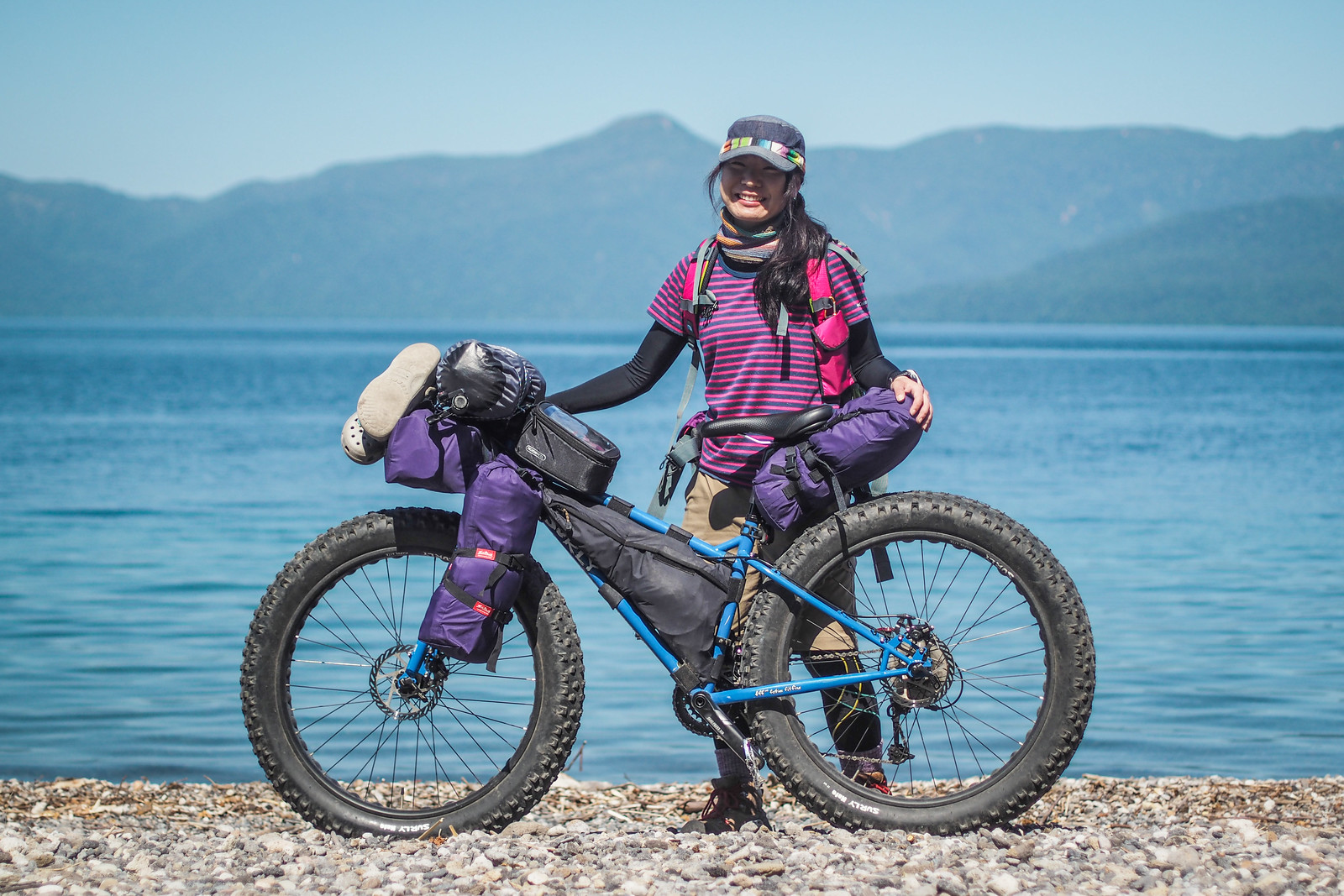 Once were were on the road again, it was straight to one of my favorite rides in the Chitose region: the Kita Go-Jo rindo. This delightful slither of very rough gravel road runs through beautiful forest all the way to Chitose City proper, and towards the end runs parallel to a beautiful little creek.

The perfect place to see if the 20-inch wheeled folding bike can take a beating. The conditions of this road should not be under-stated. On my 29er Karate Monkey, with 50mm wide rims and 60mm wide tires, I’ve come away snake-bite punctures on the jagged blocky gravel. Such is life when you want to have the least amount of tire pressure in order to smooth out the bumps, but not too little pressure that the tire ‘bottoms out’ and pinches the tube between the tire and rim.

The Tern Verge S27h with its 2.15-inch (55mm) wide tires performs really well even on these rocks. “The best strategy is just to go really fast,” said Chris as he careened past me. I couldn’t agree more.

Not to be one to be outdone, however, I cranked past him in order to get some distance in front of him so I might get a photo of him coming towards me. I gained around 100m on him, rounded a corner, and dropped my bike and waited.

When he did finally appear around the corner, however, he was pushing the bike. The pressure in the tires was a little too low, it seemed, and he’d ended up with a snakebite puncture.

We managed to fix the puncture(s) fairly quickly, without the need to remove the back wheel. It all made me wonder if it would be at all possible to run the 20-inch Big Apples tubeless…

Puncture sorted, we were on the road again. Milking every last drop of speed. And we were soon (all too soon) back on pavement.

All in all a fantastic way to spend a weekend, happy that Hokkaido had put on some awesome weather in one of our favorite locations in Japan.

As mentioned earlier, Chris was on my Tern Verge S27h (see my gravel road review here). The bike is set up with an 11-speed Shimano Alfine hub (42-tooth chainring with 21-tooth cog on the hub), which replaces the stock Sram Dual Drive transmission. The rear wheel is built up with the Alfine hub and a Velocity Aeroheat rim. A Hebie Chainglider provides full coverage of the chain, with very little added friction. On the front of the bike is the Luggage Truss, to which an Ortlieb Handlebar bag is attached. The panniers are some cheap second hand ones that drape over the rear carrier. The saddle is a Selle Anatomica leather saddle. And yes, the kickstand is broken. I managed to land on it when jumping off a curb, which snapped it in half. 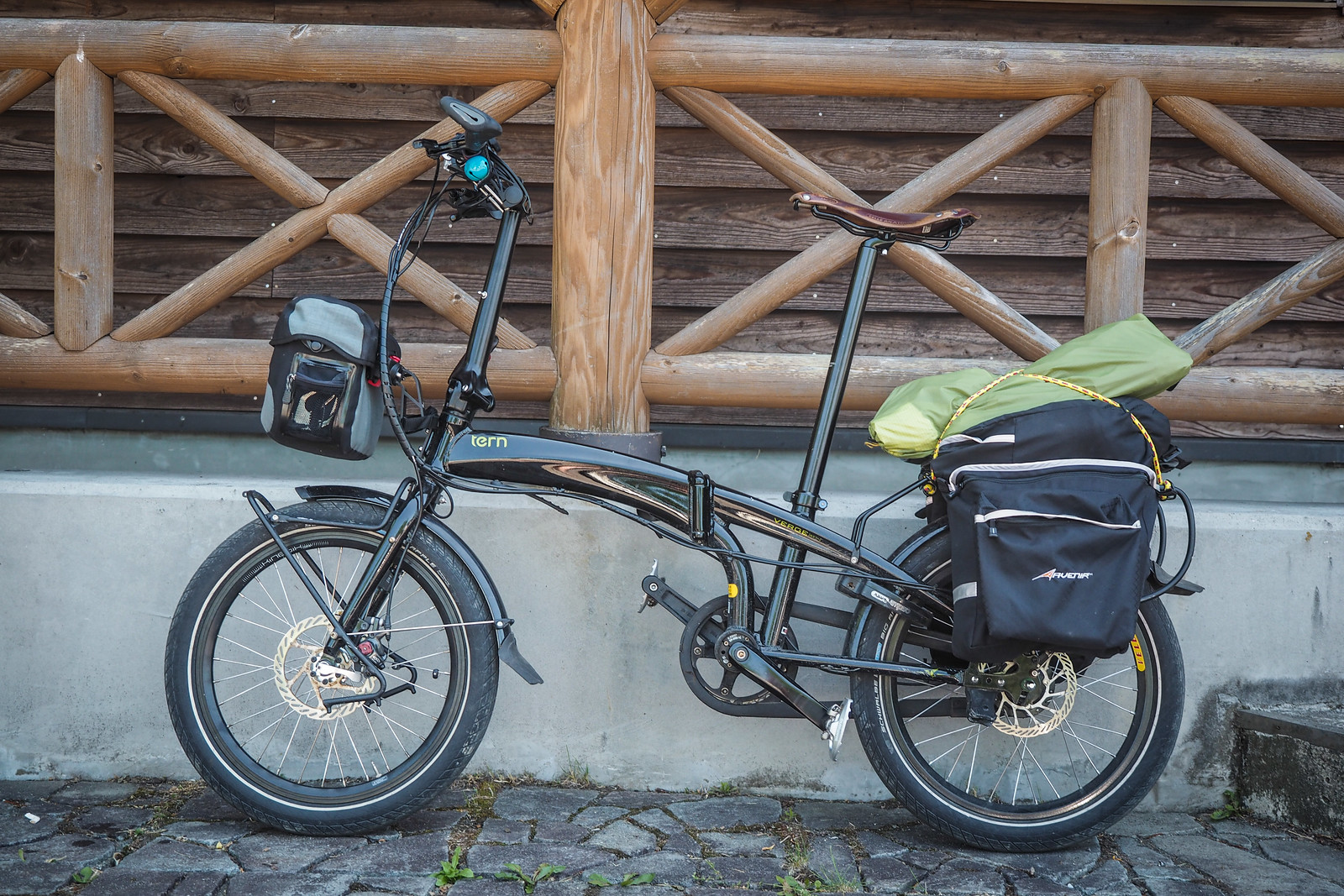 Done this route up to Morappu Campground? Thinking of doing it? Please post any feedback or queries here. Thanks!