Given it’s close proximity to Sapporo City, I had expected Ginreiso Hut, at the foot of Mt. Haruka, to be bustling for our overnight trip on the 3rd of January. In the end, our group of four were the only ones to make the short 3 hour climb. We had the place to ourselves. (Unless otherwise noted, all photos by Rick Siddle.)

Mt. Haruka is a bit of a mainstay for backcountry skiers, especially for those keen for a quick and easy overnighter, in close proximity to Sapporo. The big attraction for me, at least, is the fantastic Ginreiso Hut (full hut information here). This mountain hut, with a permanent caretaker, is owned and operated by the Sapporo campus of Tokai University (call 011-571-5111 to book in advance and confirm whether or not the caretaker will be there; the hut is not available for use when the hutkeeper is not there). Along with fellow skiers Dirk, Rick, and my partner Haidee we hired a car and headed out there for a first overnight backcountry ski trip for the year. 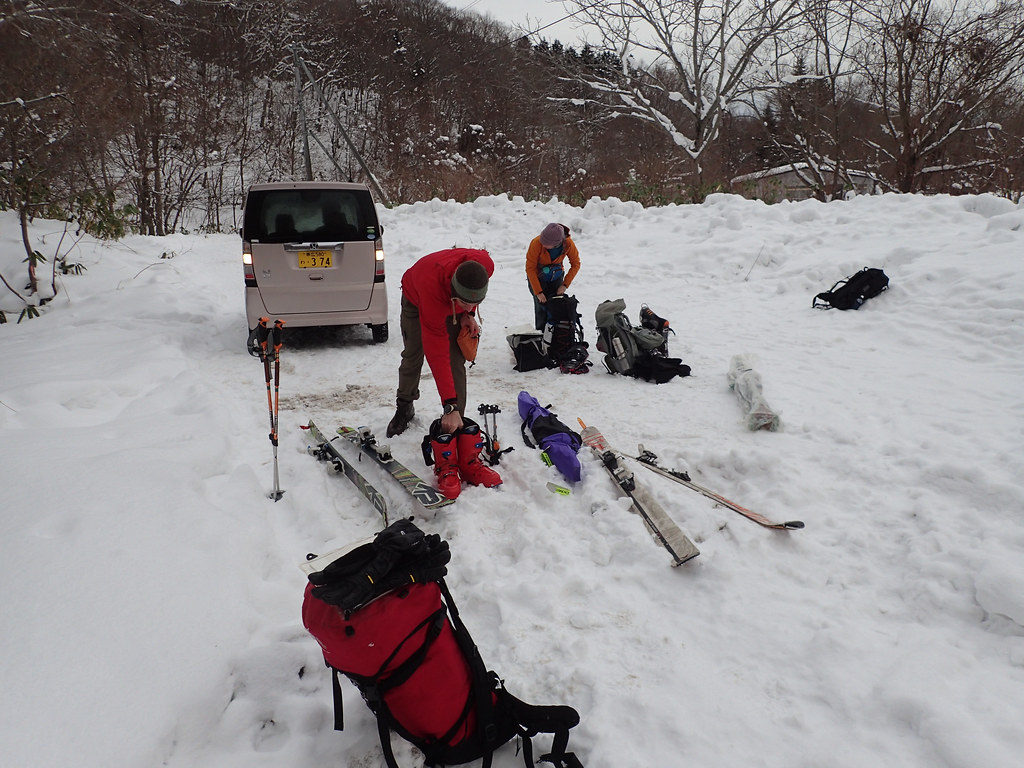 Cars can be parked near the gate at one of the trailheads (location here). Keep in mind, however, that this is not an official carparking space; the hutkeeper at the hut warned us that after heavy snowfall, it is not uncommon to find one’s car half-buried in snow, pushed up against the car by Otaru City snow-clearing crews. Make sure you’ve got a shovel handy.

We arrived at the trailhead at around 9:30am. There were no other cars parked at the gates, so it appeared that we were some of the first to head up for the day. Just as we were setting off, however, a group of five snowmobiles darted ahead of us, leaving us to breathe their fumes for a few minutes. This is one minor drawback of the route up to the Harukayama mountain hut. Snowmobiles also make use of the forestry road route most of the way up to the hut. While this makes for easier skinning and snowshoeing, it can mean for some icy hardpack in the lower reaches.

If you’re like me, however, and prefer getting away from civilization, at least in principle, the summer hiking trail route follows the forestry road just a few meters below the road. This is the route we chose for much of the way up. This route is ideal for skis, but with plenty of traversing, can be hard going on wider snowshoes. 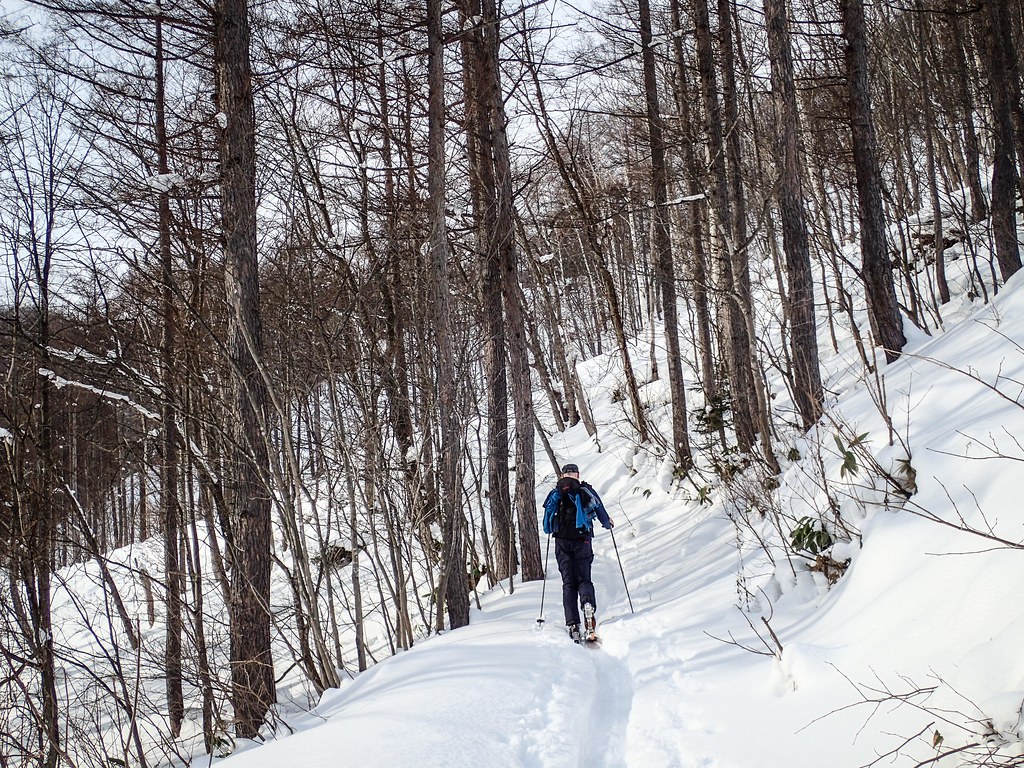 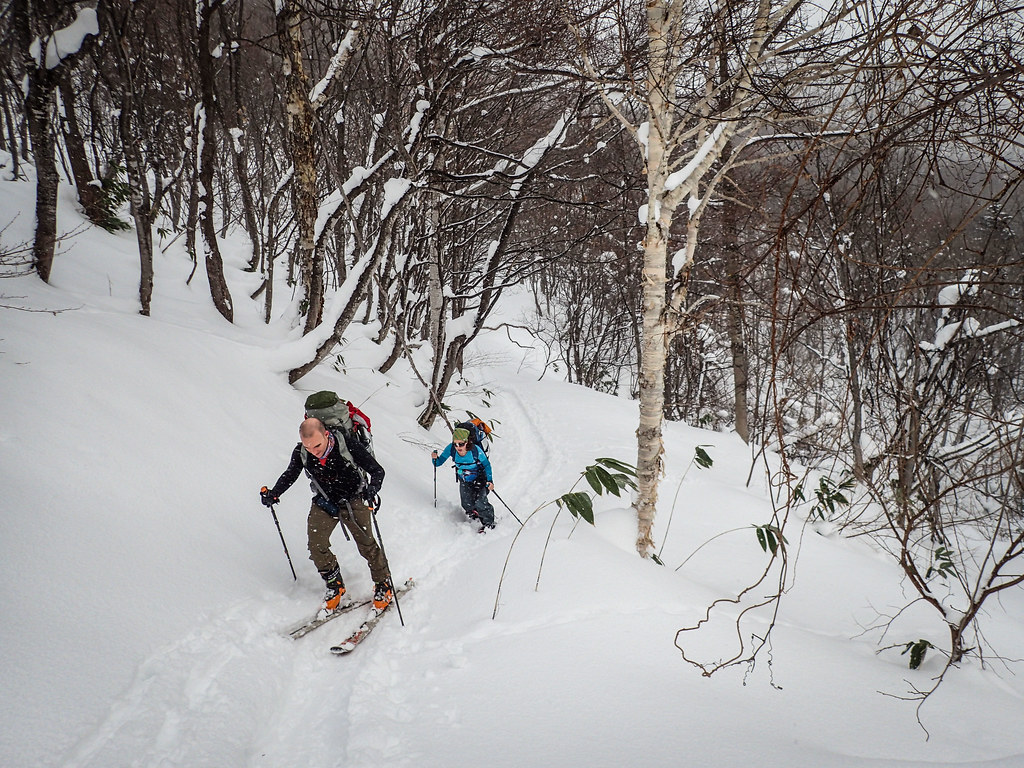 We took a quick break at the final large clearing before hitting the main wide ridge to the hut, around two thirds of the way to the hut. By now a moderate snowfall had begun… 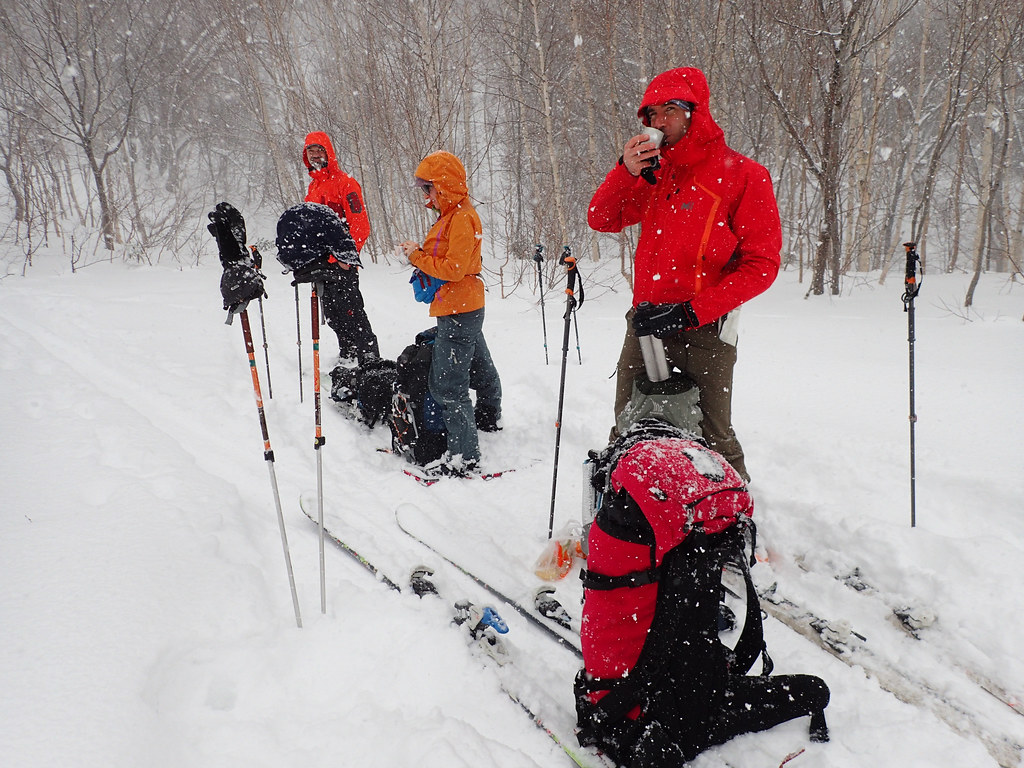 Meaning that the final hour to the hut was in lower visibility conditions. 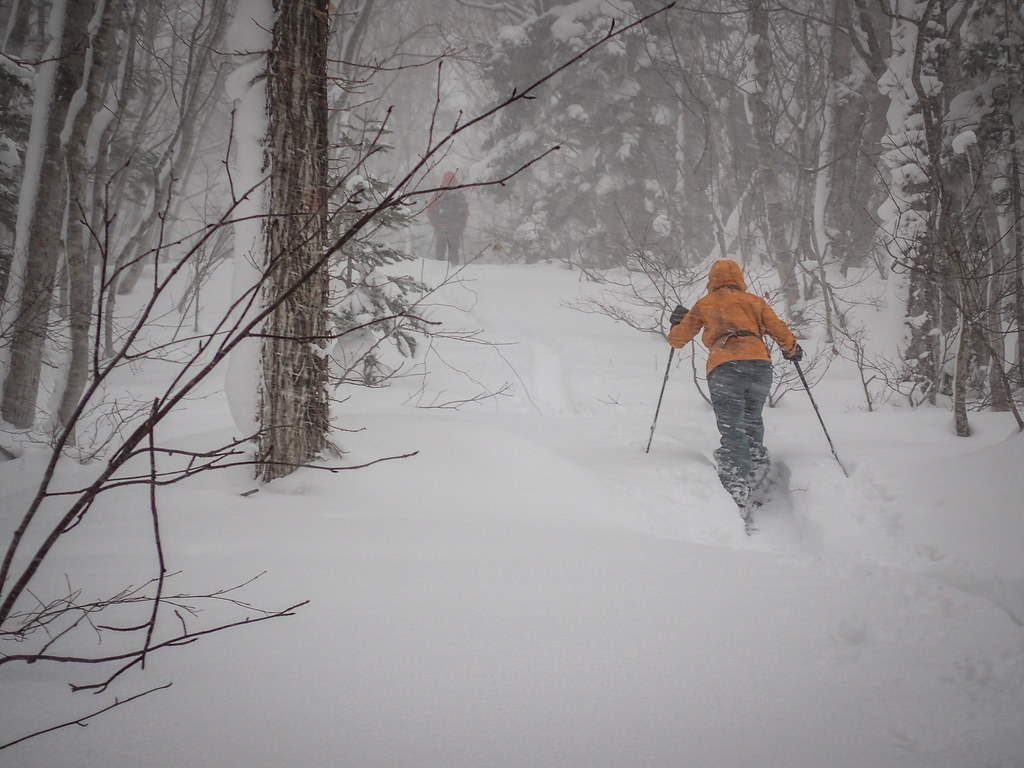 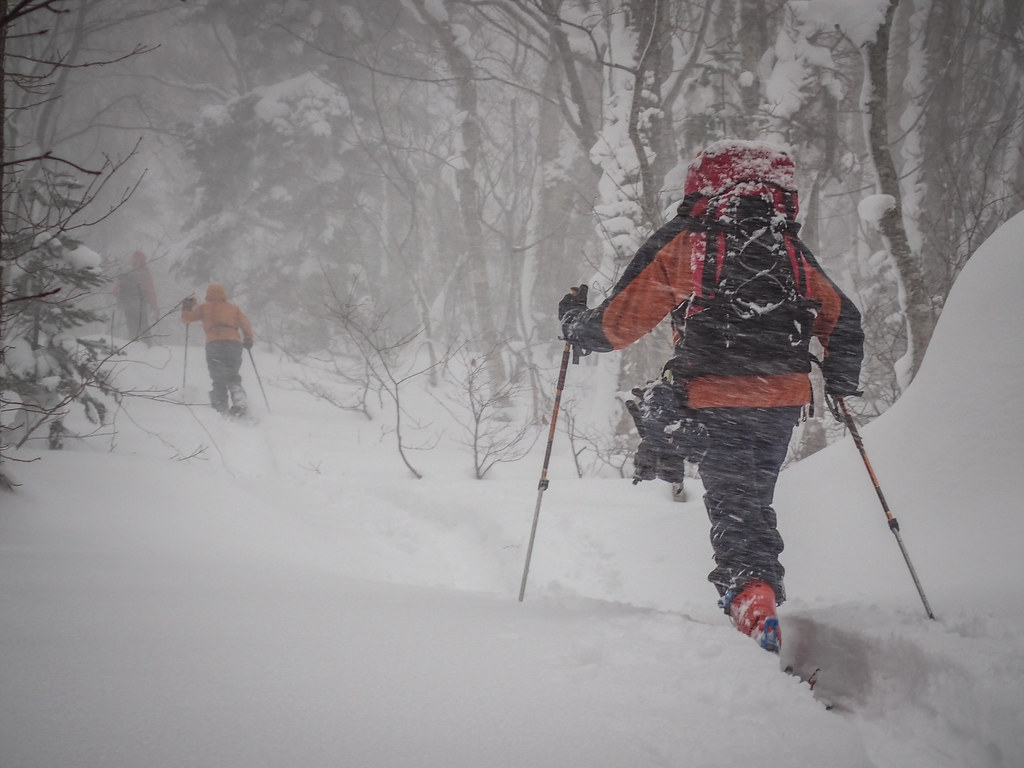 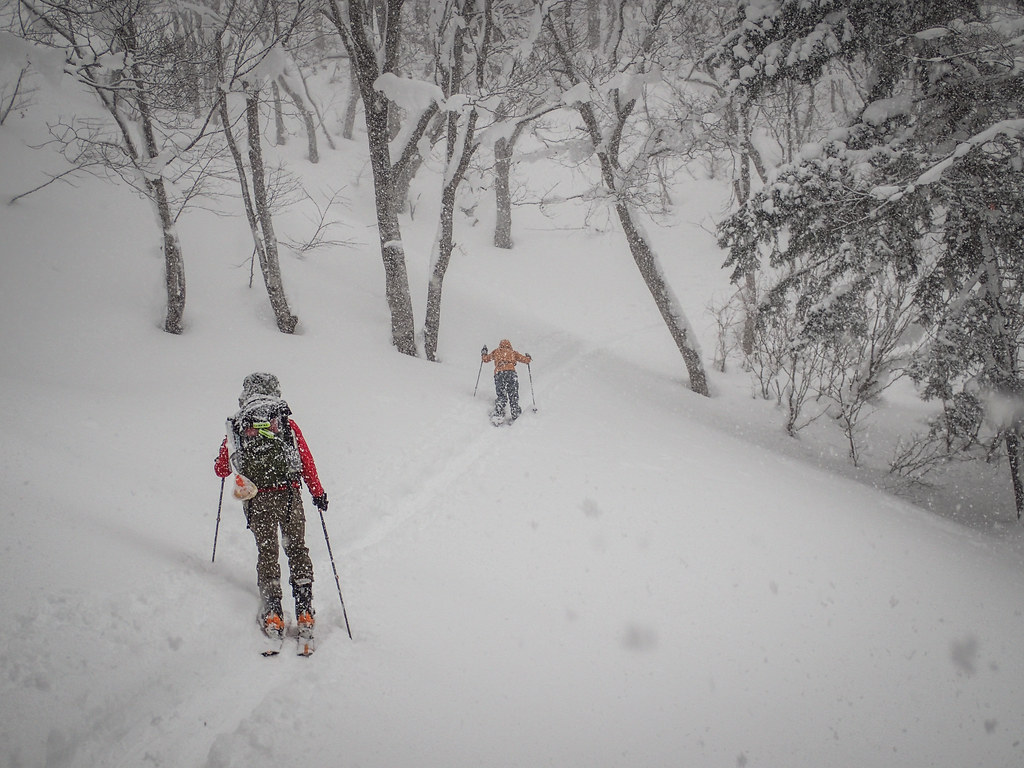 We arrived at the hut more or less on schedule at just before 1pm. It was great to have arrived, and we were all ready for lunch. 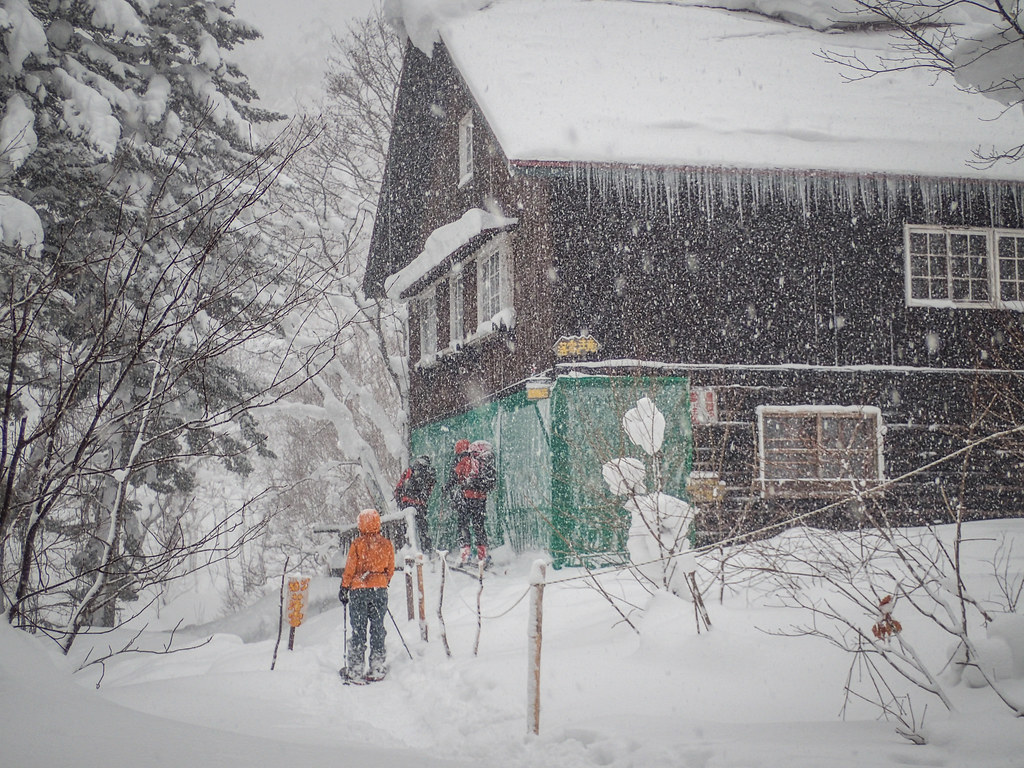 The hutkeeper poked his head out of the door when we arrived, and ushered us in with his usual great fanfare of making sure we were aware of where everything goes. Boots were placed next to the massive wood-burner stove, boot liners and gloves were tossed up onto the wire rack strung above the stove, and money was exchanged for our night in the hut (800yen per person). The hutkepper’s close attention to guest’s movements when they arrive, and when they are cooking, and when they are setting up the bunk rooms, can feel a little overbearing at times, but the man had a heart of gold, and he’s just trying to help and keep things running smoothly.

After a leisurely lunch, we headed out again in better weather to the peak of Mt. Haruka. This is a short 30 minute hike from the hut, and allows for mostly untracked skiing back down to the hut. We only did a couple of runs before retiring to the hut for dinner, chats, and bed. 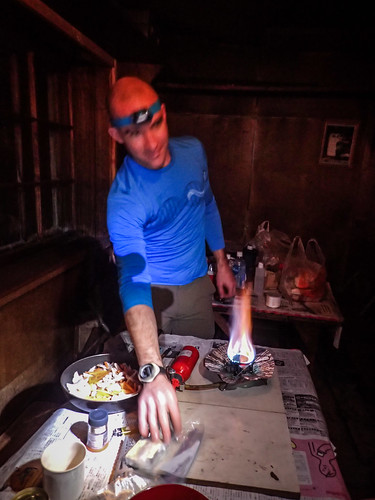 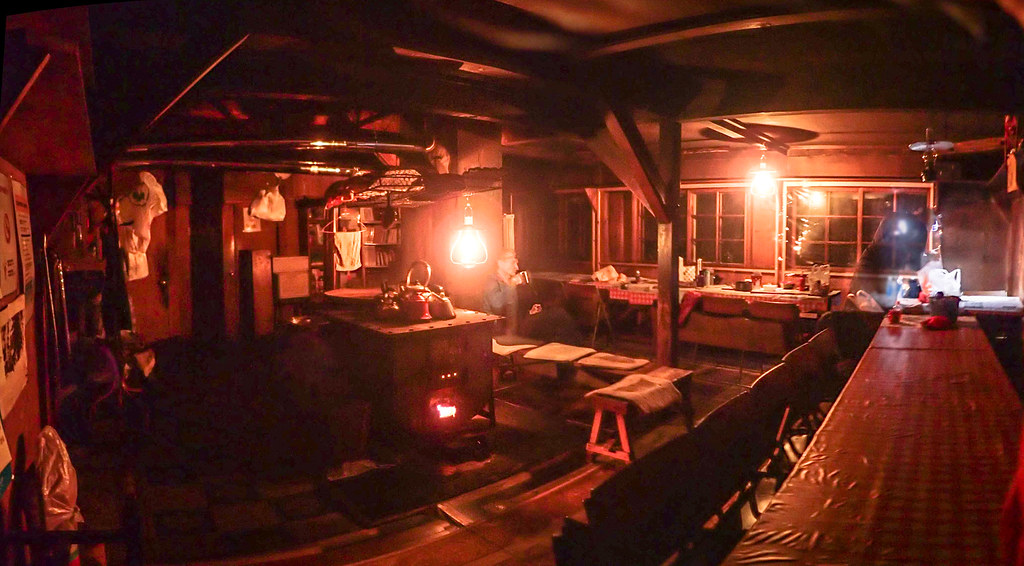 The next morning we woke to mostly blue skies. Perfect weather for hiking up to the top of Mt. Haruka again for a few ski runs before having lunch at the hut and skiing back down to the trailhead. 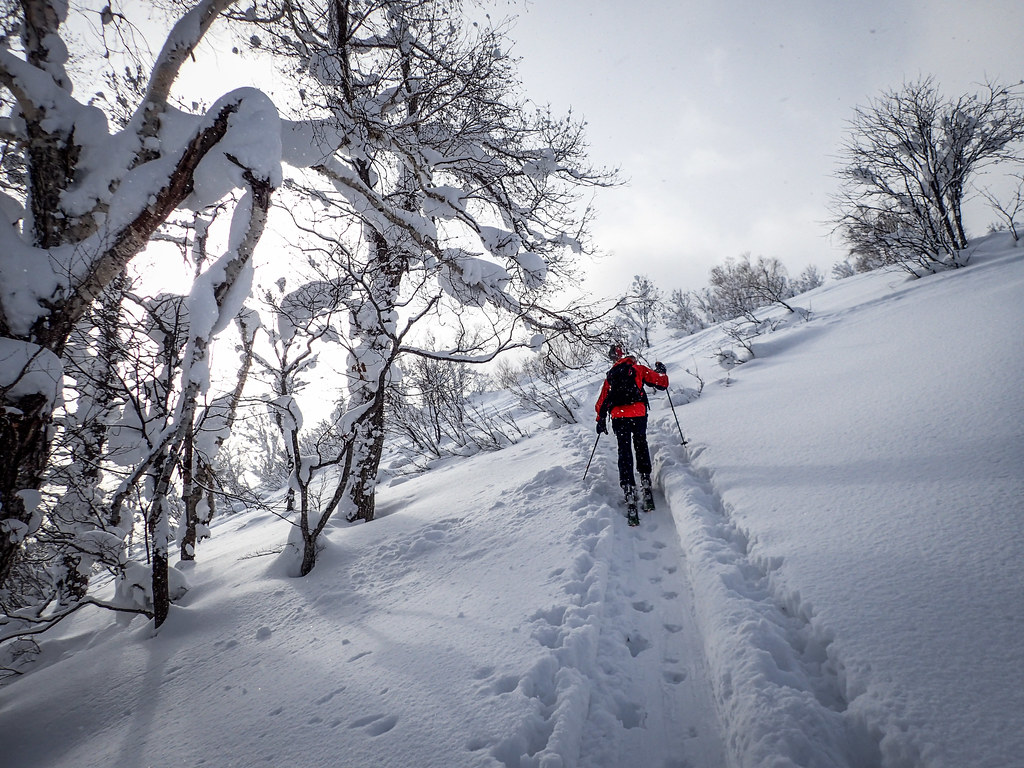 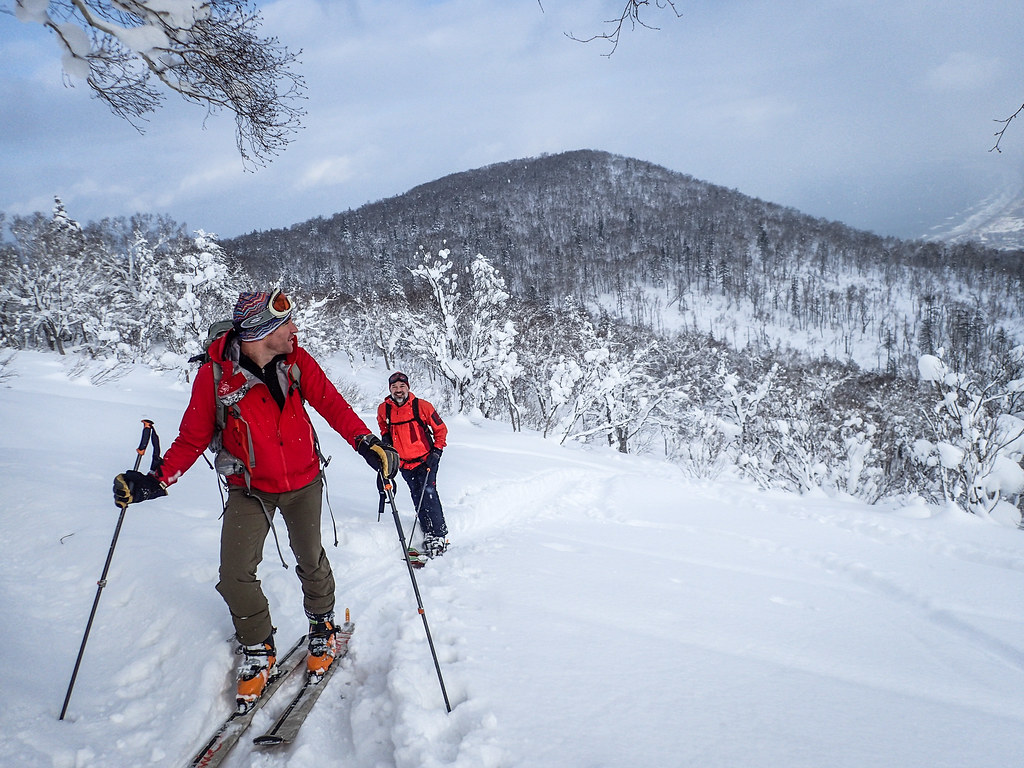