Described in the guidebook as some of the best backcountry skiing in the Sapporo area, Kimobetsu-dake is a mainstay for skiers seeking a solid day out in the hills in close proximity to Sapporo City. In good stable conditions, the whole south bowl is a veritable feast of terrain, but this route is the conservative option that still packs some punch. The broad southwest ridge gives good, relatively exposure-free access to the summit. It's also a great downhill run with plenty of area and well-spaced trees.

This Kimobetsu-dake route is on the western side (Kimobetsu Town side) of Nakayama Pass in southern Hokkaido, and is accessed from a carpark (here) about 500m down the road from the trailhead (here). It’s about 1.5 hours from downtown Sapporo City, past Jozankei.

Hokkaido Wilds author Rick Siddle ranks Kimobetsu-dake in his list of top destinations for backcountry skiing in the Sapporo City vicinity. This is not least of all due to the nature of that broad, nicely angled southwestern ridge, with well-spaced trees. The navigation up the route is fairly straight-forward too, with high-tension powerlines cutting across the route part way up. The route also follows a forestry road part of the way up too.

The route is not marked. From the car parking spot, walk about 400m up the main road to the forestry road entrance, around here. It’s likely you’ll need to scramble up the snowbanks from the road. From here, head due north, and find a suitable snowbridge to cross the river. still heading due north from the river, you’ll eventually hit the snowed in forestry road marked on the map – this may not be immediately obvious with a 5m base of snow. Roughly follow the forestry road uphill due north, cutting corners where possible. At around 730m, you’ll leave the road and carry on up the prominent ridge, which will become narrower the higher you climb. From the 990m point, head due north-northeast, where the trees will start to thin out even more. The last few hundred meters along the exposed and broad, featureless summit ridge are easy going in good weather. If visibility is low, it’s best not to push it – it can be extremely disorienting up there in a whiteout. The return is the same way as the uptrack. In the GPS file attached to this post, you’ll notice we traversed to the west of our up-route, and wrapped around the east of the 570m-ish knob directly above the car park. This allows a more direct return to the carpark, but you’ll need to put skins back on for this.

There are no public transport options to the start of the route.

There is a car parking area (here) about 800m down the road from the trailhead, with room for about 10-15 cars.

From the guidebook – “Take care on the eastern side of the summit ridge; this ridge can develop some very large, dangerous cornices. Also, take care when returning back down from the summit in low visibility conditions.” I can speak from experience that it is extremely easy to be duped into happily skiing towards the west, when you should be heading south. The peak is fairly nondescript and flat, so take care when in low visibility conditions.

The closest natural onsen would be Kogane-yu Onsen (here) or Matsu-no-yu (just below Kogane-yu) just past Jozankei on the way back to Sapporo. If you’re approaching from Niseko, then head to one of the many nice onsen in the Niseko area on your way back.

See the write-up (in Japanese) from p. 166 of the Yuki-yama Guide (ISBN: 978-4894538047). There is an alternative route that involves less climbing (and less downhill skiing) that starts at Nakayama Pass. Also see Hokkaido Hiking Log’s Kimobetsu route report here.

If you’d like to ski this route and/or explore other Niseko areas together with a local certified guide, get in touch with Jun Horie. He’s a Niseko-resident guide with seven years experience advanced-level ski instructing in Austria (he speaks German as well as English and Japanese). He has also guided in New Zealand and has previously led guiding operations in Hokkaido before going independent.

From Nakayama Pass, a number of 1,000m-plus mild peaks extend to the northwest. The first of those peaks is Mt. Kimobetsu-dake (喜茂別岳). Due to its high altitude, it has no trees on the upper reaches, with rock birch and sasa bamboo grass dotting the landscape. In winter the upper areas turn pure white, and the mountain becomes an ideal place for backcountry skiing…

Drawn by its relative close proximity to Sapporo City, and the promise of some great skiing on the southwestern ridge, three of us made the trek to Mt. Kimobetsu early on a Saturday morning. I had rented a car the evening before from my favorite budget rental place – Nikoniko Rentals – and was in central Sapporo by 5:45am to pick the lads up.

From central Sapporo, it is just under 1.5 hours by car up and over Nakayama Pass, to the cleared car park area 400m south of the official starting point of the winter trail up Mt. Kimobetsu. By the time we arrived at around 7:30am, we were still the first car there – indeed, we would end up breaking trail the whole way up to the summit.

From the carpark, we followed the Yuki-yama Guide recommendation to walk up the road for 400m or so, to start after the second bridge. It would be just as feasible to head straight up from the carpark, however, and skirt around the hill to a forestry road above the carpark (as indicated by my tracklog above – the route we took when descending off the mountain). This would avoid the inglorious scramble up to the unmarked trailhead from the road…As well as the lengthy search for a suitable snowbridge over the creek, about 1km from the trailhead.

After crossing the creek, the route meanders up and over (and along, at times) a forestry road to a set of powerlines. The route doesn’t hang around near the lines for long before connecting with the southwestern ridge proper. This broad ridge, around 30 degrees in places, and dotted with large well spaced out trees, is a prime location to practice multiple long zigzags up the slope.

Once at the top of the ridge, most of the upward slog is done. The wind was howling when we were up there, so Rick left course flags in our wake as we headed on, as an extra precaution should the weather turn really foul. Even though I was using a GPS route map app on my smartphone (I like the Japanese Chizu-roid (地図ロイド) app for displaying official Japanese topographical maps), these flags were super handy to keep us from dropping down too far west off the summit on the way down in near-whiteout conditions.

The further we got up on the summit ridge, the windier it got. By the time we had arrived at the summit, it was nearly a white-out. The howling, frigid wind soon laid to rest any ideas of sitting down for a leisurely lunch before descending.

As per the guidebook, it was indeed a very temptatious descent, with the western drop off the summit beckoning us down the wrong side of the southwest ridge. The need to retrieve Rick’s course flags as we descended forced us to check our location and direction regularly, which also kept us on course. The GPS track on my smartphone would have done the same thing, but even 30 meters down the wrong way is not fun in those conditions.

Once reunited with our zigzags tracks on the southwest ridge, however, we could let loose a little. Nate, a native to skiing, was in his element. “I never really imagined that I’d be here in the Hokkaido backcountry, skiing the sort of snow I’d only seen in Warren Miller films,” he said – big grins all around. 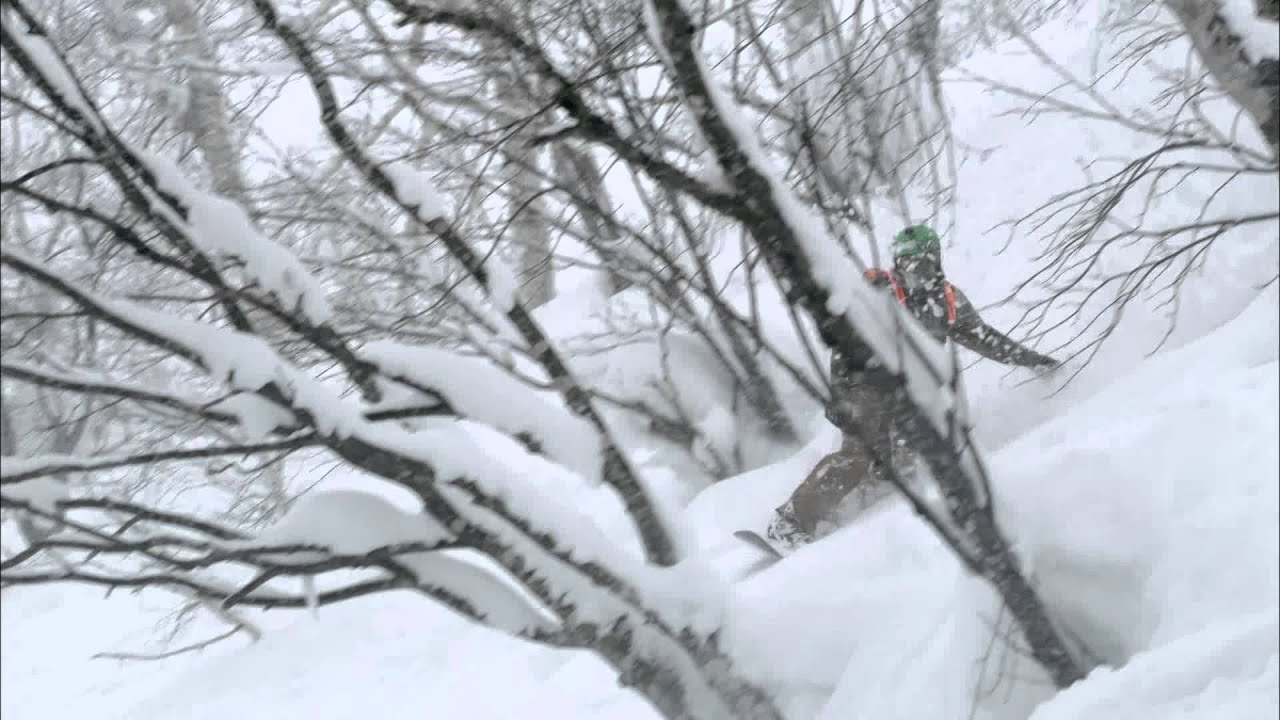 At the end of the steeper part of the downhill, we stopped for a late lunch. Nate summed up the trip well, saying “the downhill was great, but we sure did have to work for it!”

We made up for the exertion on the way home with a long soak in the Matsu-no-yu onsen (here) and ramen at the best ramen place on this side of Sapporo (according to Rick) – The Shirakaba Sanso ramen shop in Makomanai (here).

A short note on the very end of the descent

We decided to take a more direct route to the car, skirting around the 570m-ish peak above the carpark, rather than follow our tracks to the road above the second bridge up the road from carpark. This is a double-edged sword in that it gets you right above the carpark (and avoids needing to walk along the road), but it does involve some ever-so-slight uphill tramping, and then lengthy traversing.

If you’d rather avoid walking on the narrow road-edge, take the route we took. Otherwise, stick to your uphill track and walk down the road. Do make sure to resist the urge to drop down too soon. Keep traversing until you are well and truly above the carpark. Otherwise, you may end up like two of our party – who shall remain nameless – who had to pay dearly for not resisting the sweet siren calls from the bottom of the gully. At least we now know for sure that Dynafit ski boots are not 100% waterproof 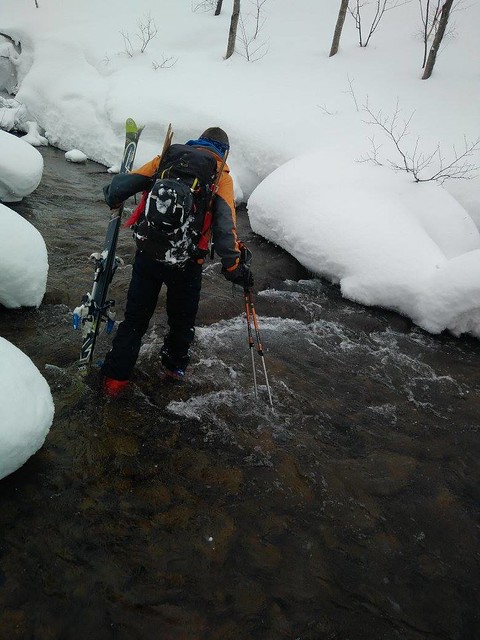 Done this route to Kimobetsu-dake, or others nearby? Thinking of doing it? Please post any feedback, reports, or queries here. Thanks!