Traveling with a Bike on the Train in Japan

by Rob Thomson
217 21
by Rob Thomson
217 21
In this how-to post, I give some advice on how to travel on a train in Japan with a bicycle. In this particular situation, Virginia has a folding bike. However, you can certainly travel on a train with a full-sized bike in Japan too. The rules are the same as a folding bike. A) make it smaller (i.e., remove a wheel and turn handlebars), B) cover it with a bike bag, box, or similar, so that the entire bike is enclosed.

In Japan, traveling on the train with a bicycle is both a blessing and a curse. These are the pros and cons, as I see them.

Long story short, if you own a small-wheeled folding bike, traveling on a train in Japan can be extremely straight forward. Here’s how the intrepid Virgina Toy from New Zealand managed it when she visited Sapporo on a whirling academic research visit to Sapporo in northern Japan. I stood back and snapped pictures as she got the bike ready for the train. 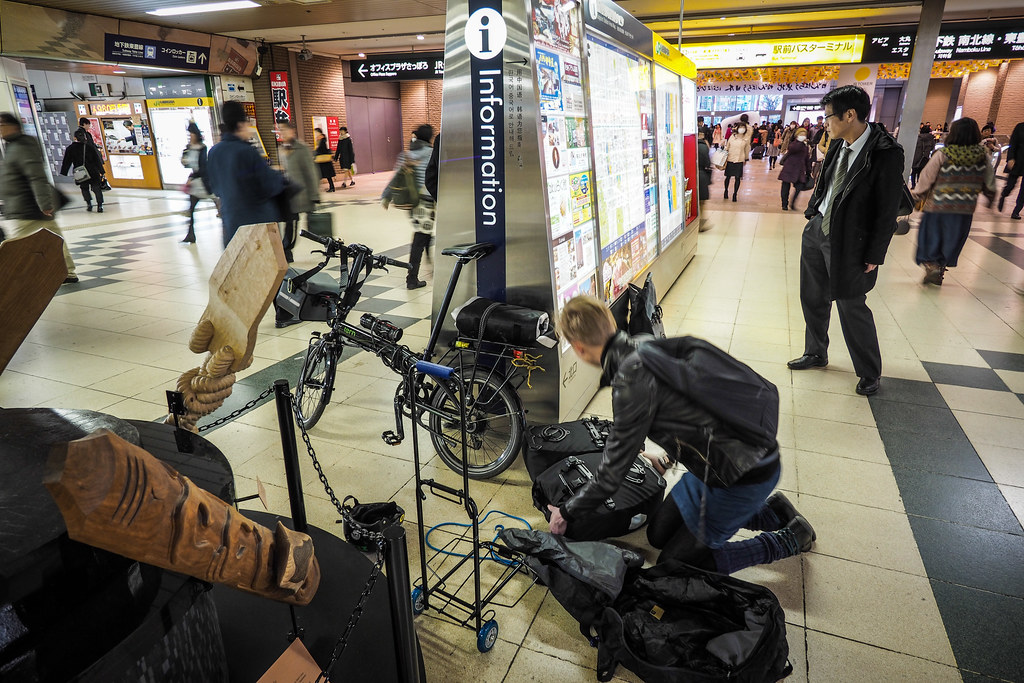 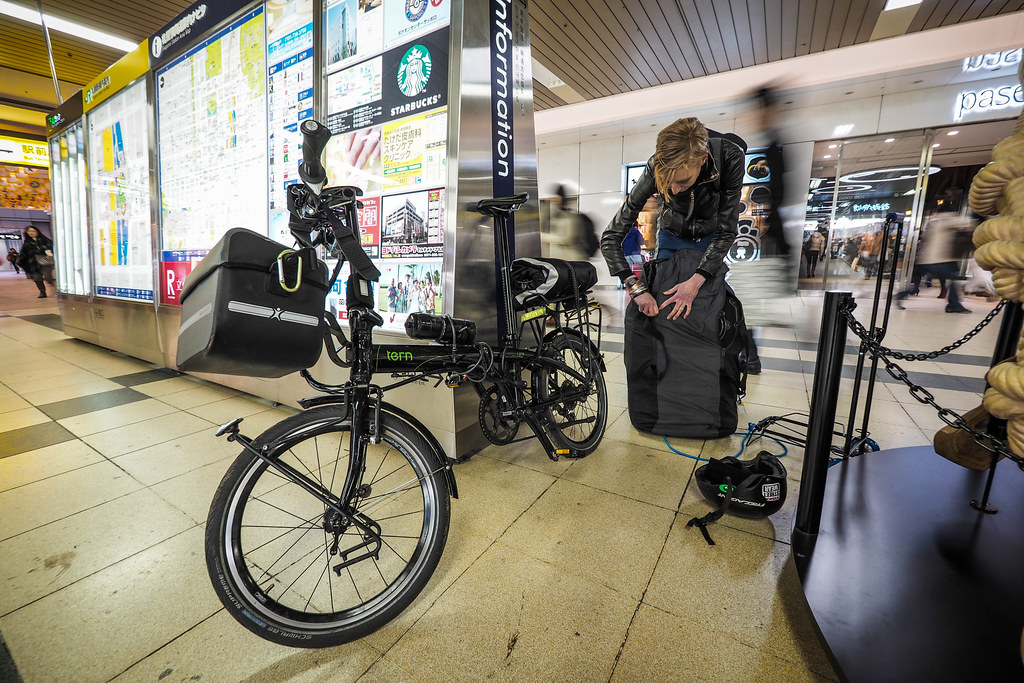 Panniers snugly ensconced in their bag and trolley, time to sort out the bike. Prepare the bike bag. 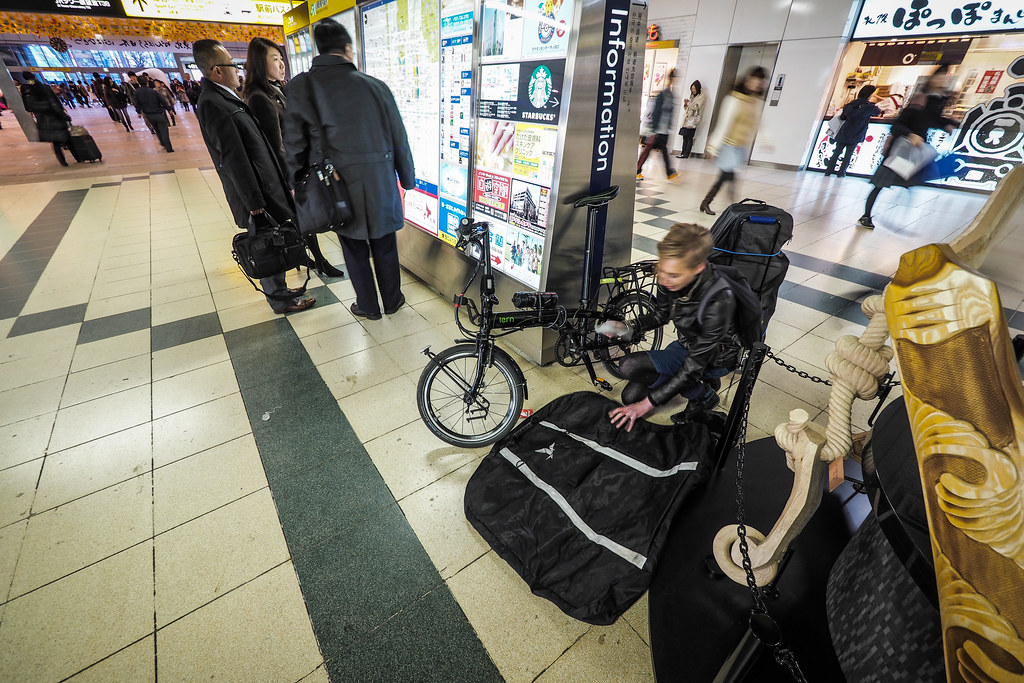 Fold the bike. Virginia travels extensively around the world on academic conference trips and the likes with her Tern Link P24h. The ‘N-fold’ is very simple, and best of all, the bike stays standing upright once folded. 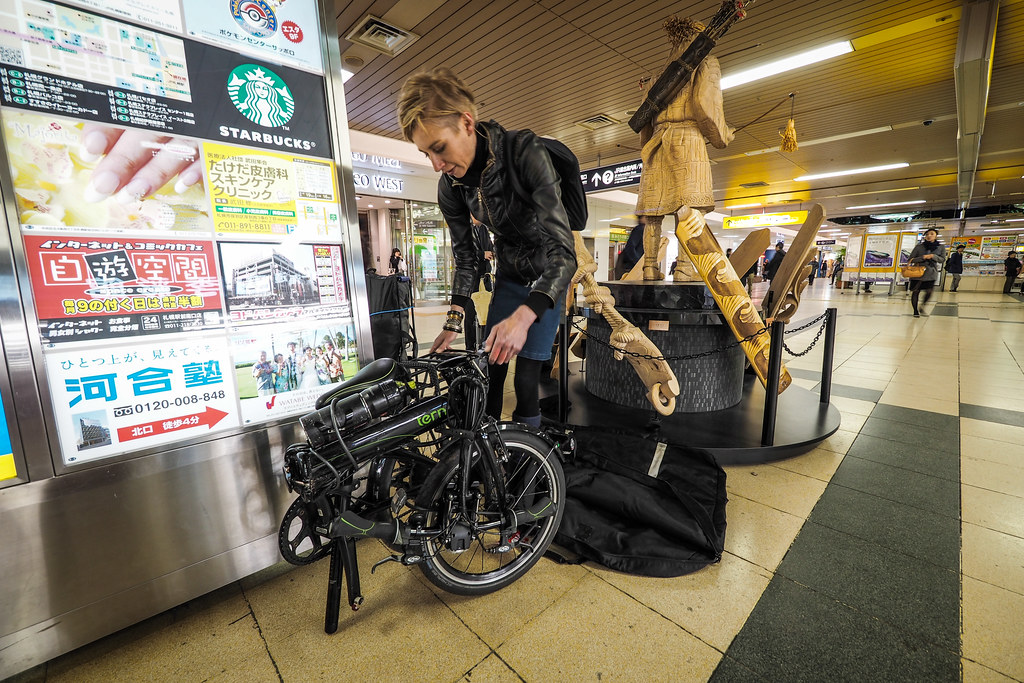 Get that bike in the bag. Virginia’s bike bag is a Tern padded ‘Stow Bag’ made of extra heavy duty fabric and has some degree of padding. She puts the bike on planes just with this bag and the bike seems to have survived multiple inter-continental flights. 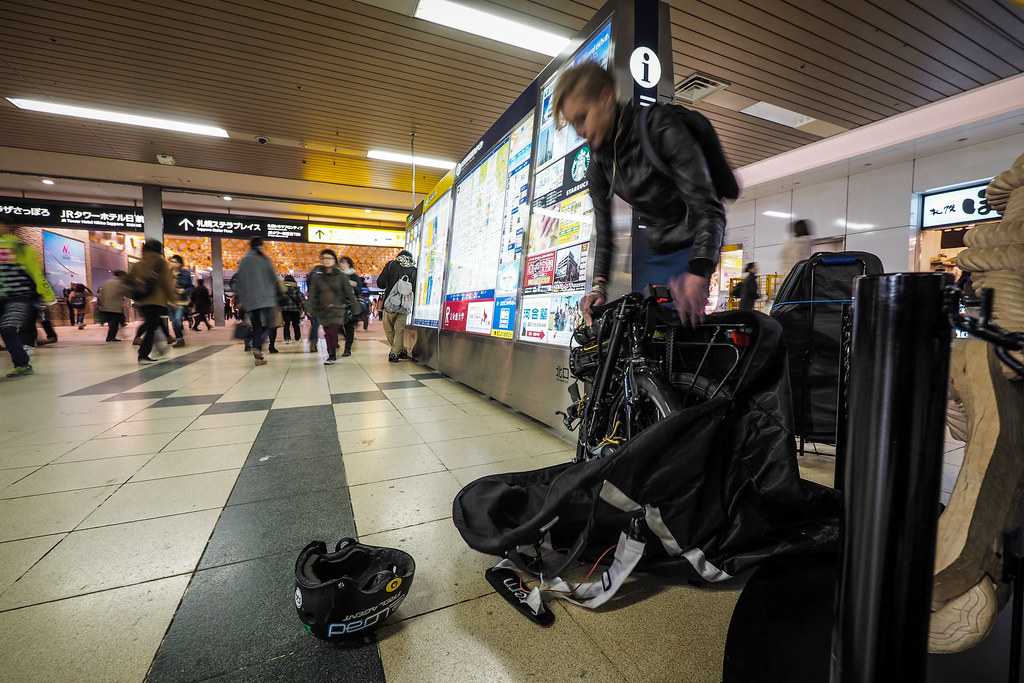 Shoulder the bike-in-the-bag, grab the trolley, and head to the ticket dispenser, parting the crowds like Moses and the Red Sea. 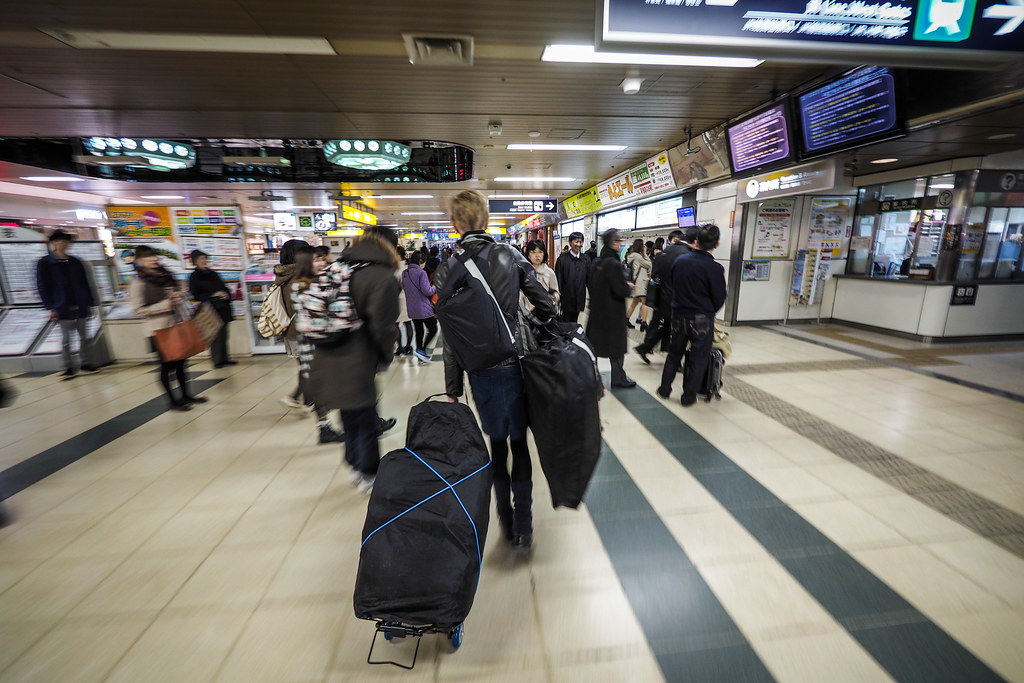 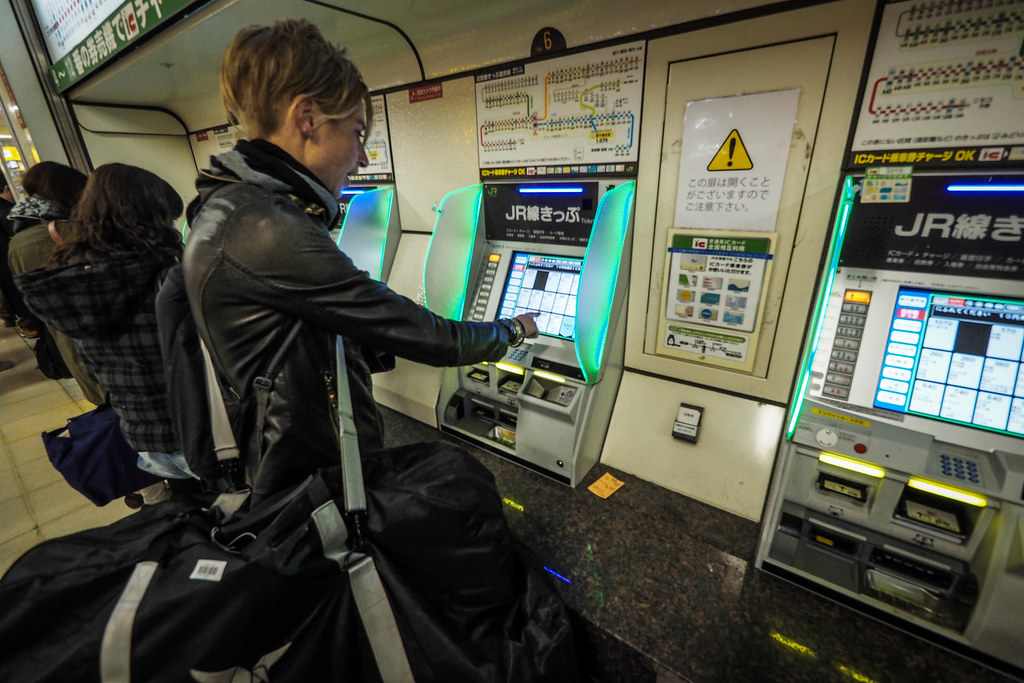 Squeeze through the gates and look for an elevator up to the platform. 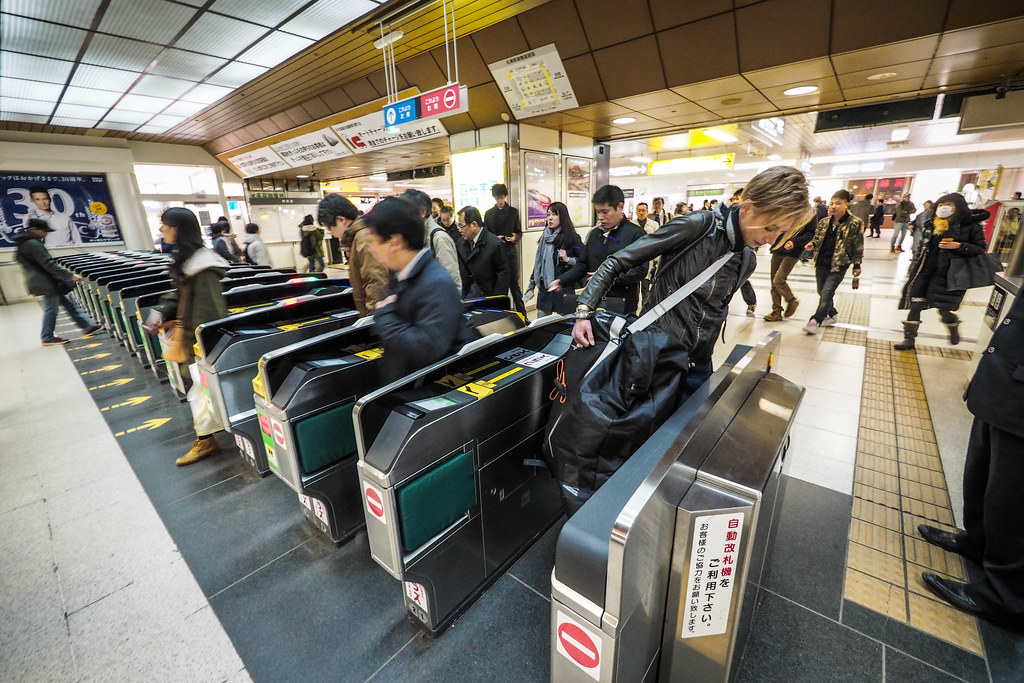 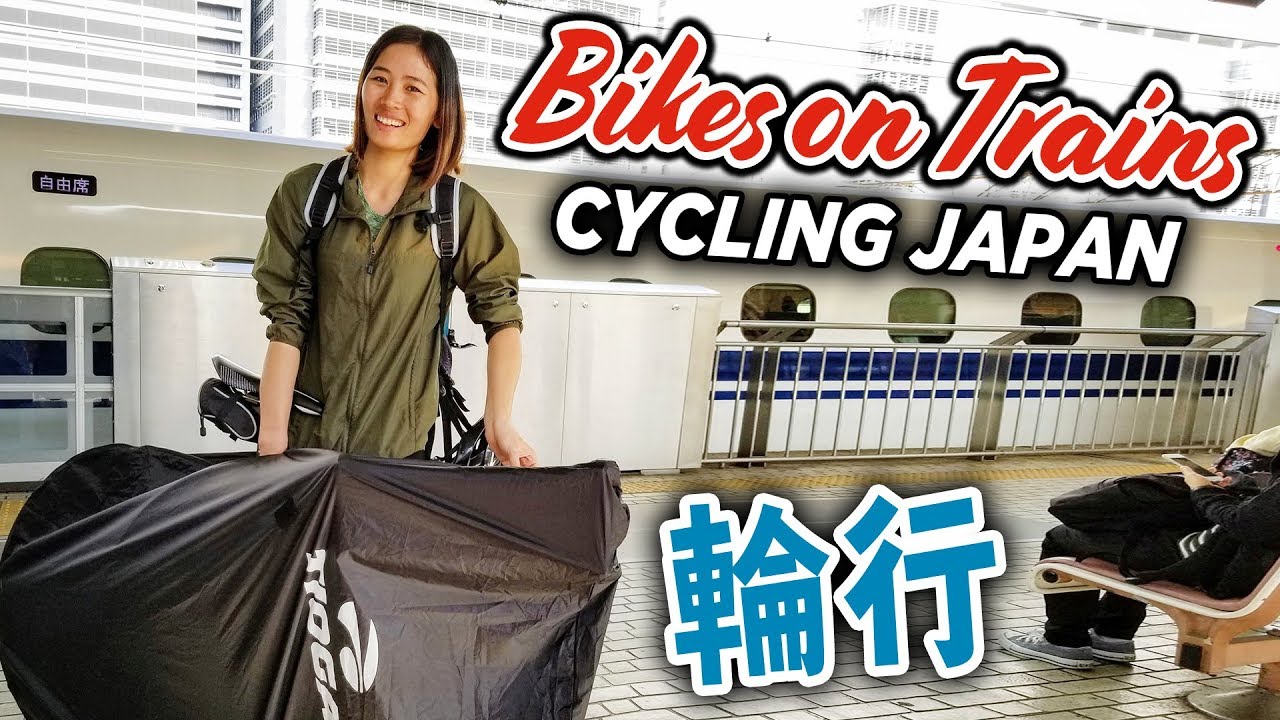 Traveling with a Bike on the Train in Japan Difficulty Rating