Mt. Tokushubetsu - the mountain with the impossibly complex Japanese characters (徳舜瞥山, 1,309m) - is one of those classic Hokkaido backcountry hills. Similar to Mt. Shakotan further northeast, it makes for a fairly straight-forward half-day spring trip - one that beginners and experienced skiers will enjoy. Rick, Jeff and I headed up on a mid-April spring jaunt.

Mt. Tokushunbetsu is about half way between Lake Shikotsu and Lake Toya in southwestern Hokkaido. The start of the winter route is around here.

This winter backcountry ski touring route up Mt. Tokushunbetsu roughly follows the summer trail to the summit and on the way back down. In spring, when the weather is more stable, it is a straight-forward mountain to ski. In the deeper winter months, however, conditions can be challenging, hence the ‘advanced’ difficulty rating.

After the climb and ski, we drove for 15 minutes to the Kitayuzawa onsen area, and had a soak at the unassuming but awesome Yumoto Horohoro Mountain Lodge (Hororo Sanso – 湯元ホロホロ山荘). For the location on Google Maps, click here.

In exchange for an early 7:30am coffee and light breakfast at my place, Jeff and Rick drove past our place in Chitose City on their way to the Mt. Tokushunbestu route-head from Sapporo. There are a couple of ways of getting to the Mt. Tokushunbetsu start-of-route from Sapporo, and the one via Chitose, while not much further in terms of time, is not the most picturesque. I do hope the oat-infused crepes I made were worth it. At around 8:30am we were away from my place and making our way southwest in the direction of Lake Toya.

We arrived at the start of the route at around 9:30am. It was true spring-like weather, warm enough for just a thin layer at the car. This was Jeff’s first trip out with new touring skis, so we were all admiring his shiny new kit. K2 Coombacks with Tyrolia Ambition bindings, and Pomoca high-traction skins.

We were on the snow by 10am, to start the 3-hour skin to the top. Being mid-April, the farm roads we used access the lower reaches of the forest were only just covered with snow. Another week or so, and we’d surely be hiking for up to 1km on dirt roads. Up until around 670m in altitude, the route roughly follows a forestry road. The road, and surrounding forest, apparently is funded by one of the larger banks in Hokkaido – Hokuyou Bank. Hence the requisite cute characters adorning the signs.

One of the coolest things about Mt. Tokushunbetsu is its shape. It looks like a quintessential mountain. All on its own. Poking out of the rest of the terrain. And at quite a few locations along the route, it is there, looking at you. Nicely framed by the trees.

The route itself is fairly mellow for most of the way up. At around 700m in altitude however, there is a steep, tricky step up which requires some smooth kickturns. Trees are useful hand-rails.

Much of the way until 1000m is through nicely sparse, quiet forest…thinning out as we climbed higher, the peak of Mt. Tokushunbetsu still teasing us.

We started the skin up with perfect clear weather, but as the morning wore on, a thin layer of high cloud formed, and haze rolled in, limiting our view somewhat. Still, once above the high tree line, we could see across to the Pacific Ocean, Lake Shikotsu, and Mt. Yotei.

It was around this point that the surface was getting too icy for skinning. Jeff and Rick, who didn’t have ski-crampons, left their skis and continued on foot. I attached crampons to my skis and pressed on. The low pine, exposed in places, was actually grippier than the snow.

We made it to the top at around 1pm – more or less three hours from trailhead to peak. The lack of wind was refreshing, and we were able to sit down for a leisurely lunch. From the peak, the ski down (once past the exposed low pines) is rip-roaring fun for the first 400m or so.

Further down, there is a lot of tree-dodging to be done, and some pushing on the flatter areas. On a snowboard, the terrain would grow old fast.

Below is a mash-up of around 250 photos that I took, trying to capture some action on the downhill stretch. I think they capture a little bit of the tree-dodging madness on the lower reaches… 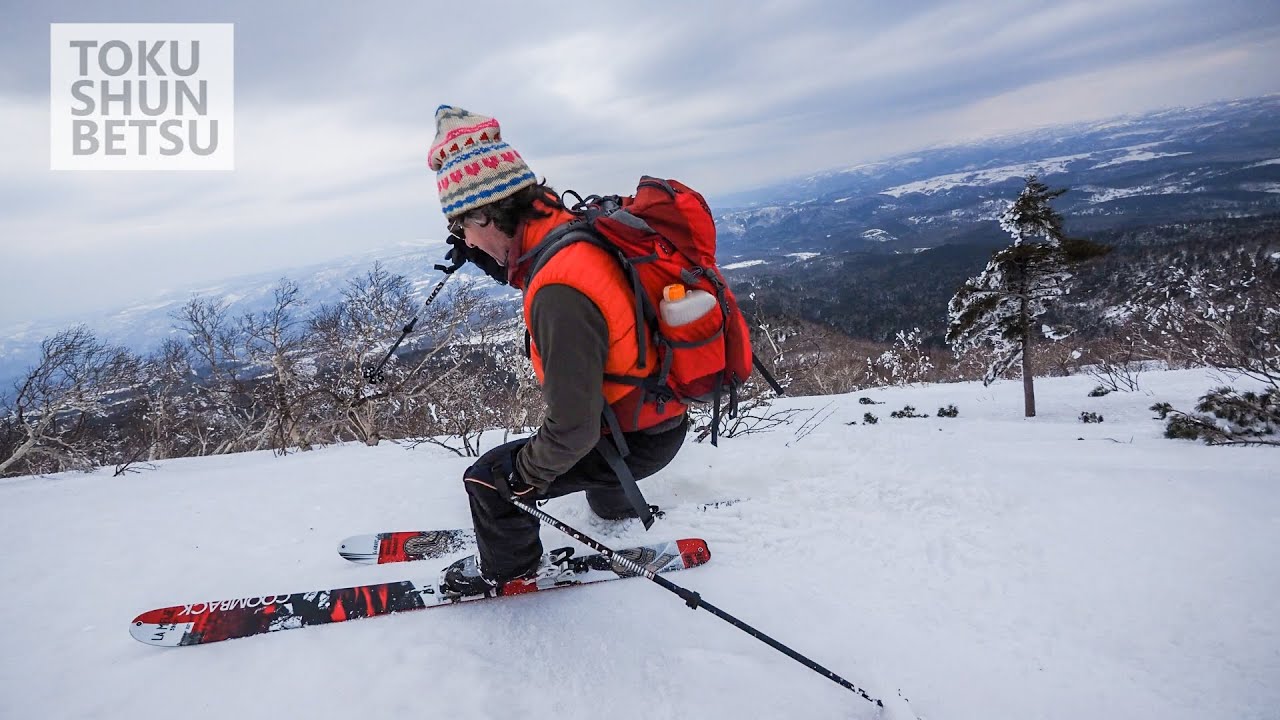 We got back to the car at around 2:30pm. Perfect timing to head to the unassuming Yunomoto Horohoro Mountain Lodge (Horohoro Sanso – 湯元ホロホロ山荘) for a soak in their massive onsen hotspring facility (location here on Google Maps). And then back to my place for a feed of gyoza, soup, rice and salad (very kindly arranged by Haidee!).

Big thanks to Jeff for driving, and to Rick for suggesting the trip! 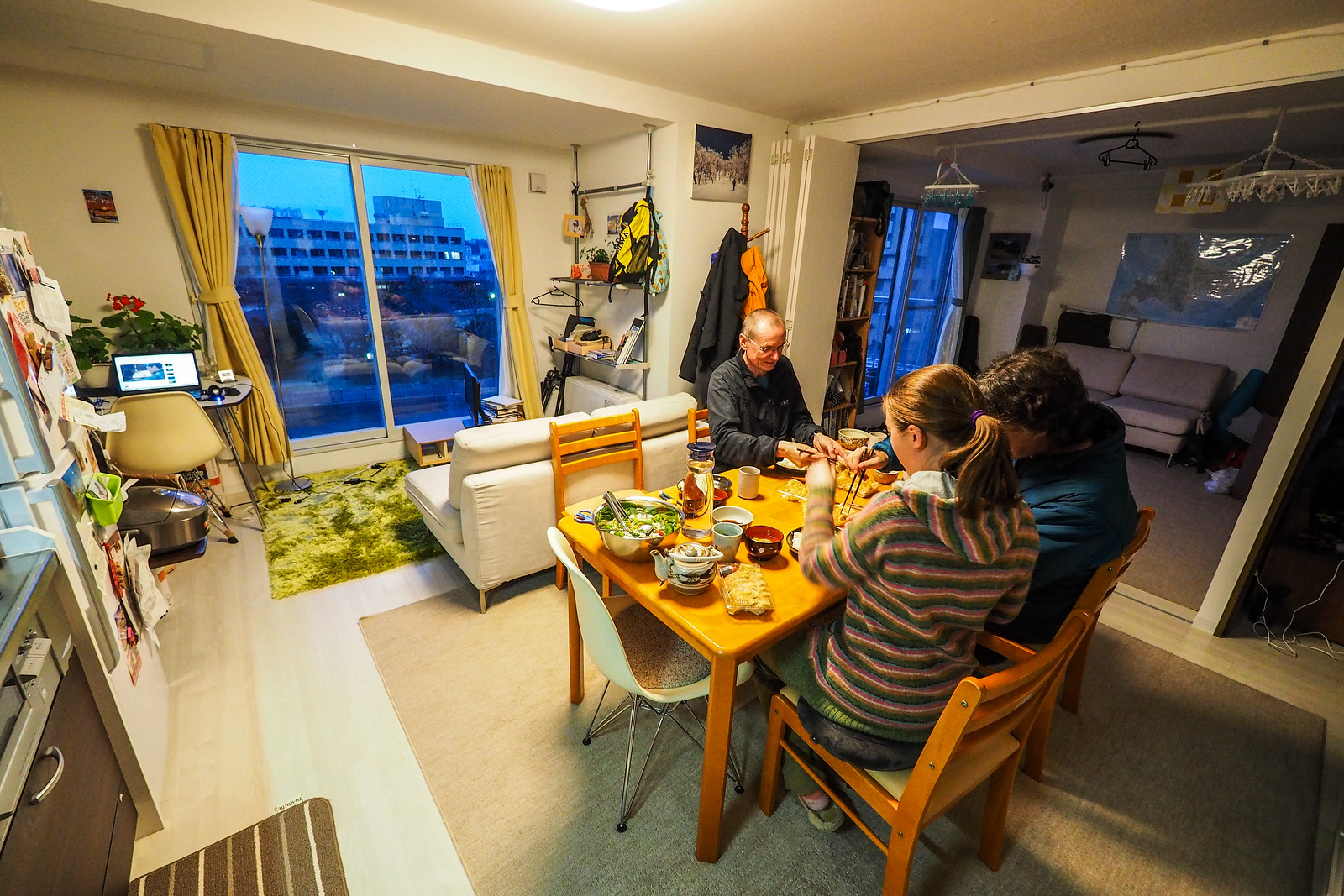 Done this route to Tokushunbetsu-yama, or others nearby? Thinking of doing it? Please post any feedback, reports, or queries here. Thanks!

Leave a Reply to Chris F from Bend.... Cancel reply