Cycling Across Hokkaido, Japan (Day 5): From Kiritappu to Akkeshi

The weather forecast was for rain today, but the morning started out stunning, with golden light as we prepared breakfast. Did we mention this campground is free for tents? 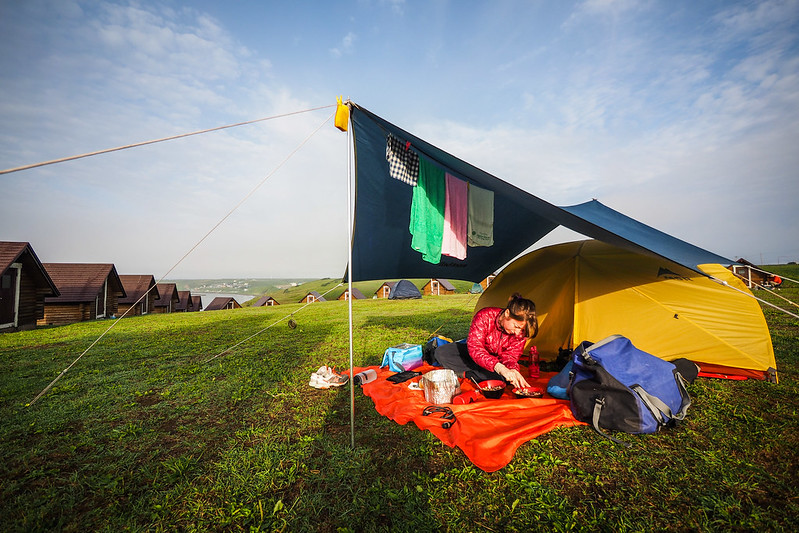 Out of all the campgrounds we would end up in on this trip, this was by far the busiest. There were four other cyclists, and probably half a dozen or so motorcyclists, plus people camping in their cars in the parking lot.

The name of the cape is Kiritappu, and the kanji (Chinese characters) used to represent the name more or less mean ‘a lot of fog’. Indeed, there was a little fog around in the morning, but all in all it was a very clear view out to sea. 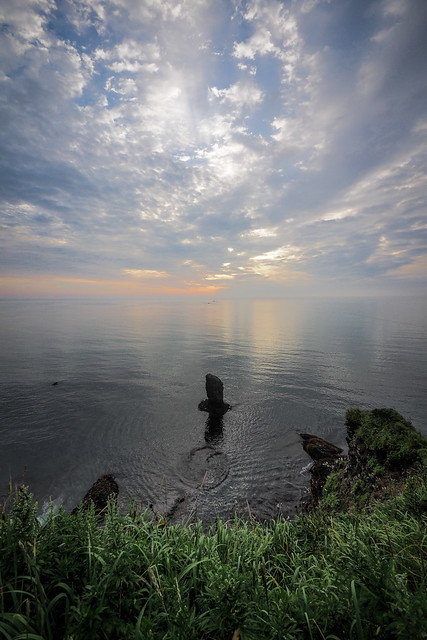 Haidee managed to capture some nice pictures of the wild flowers common around these parts. Very delicate specimens, but special because the area only sees around four or five months of greenery before succumbing to a long snowy winter. 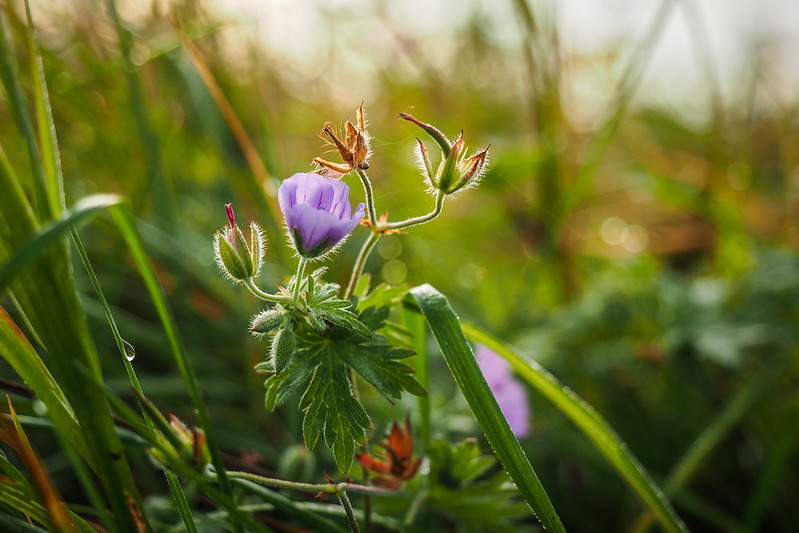 Once away from the campground, it was a fairly relaxed start to the day again. We spotted a boardwalk that jutted out into the wetlands, so we went to the end of it to see what there was to see. 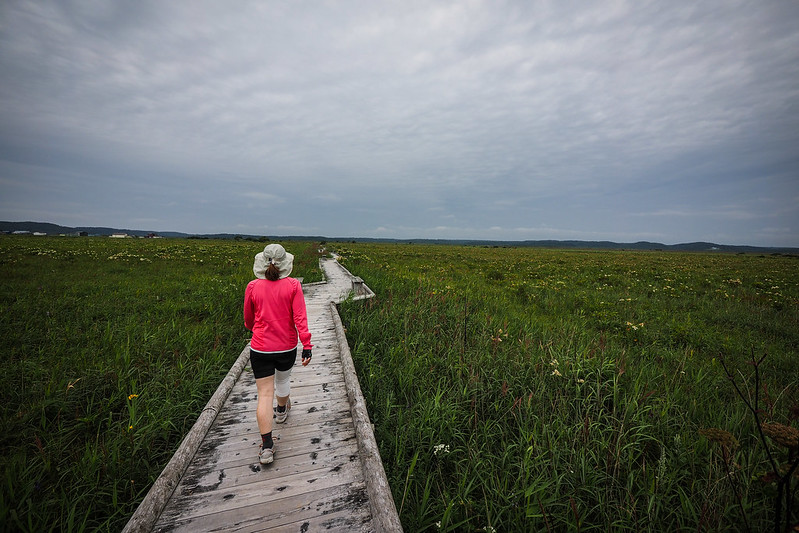 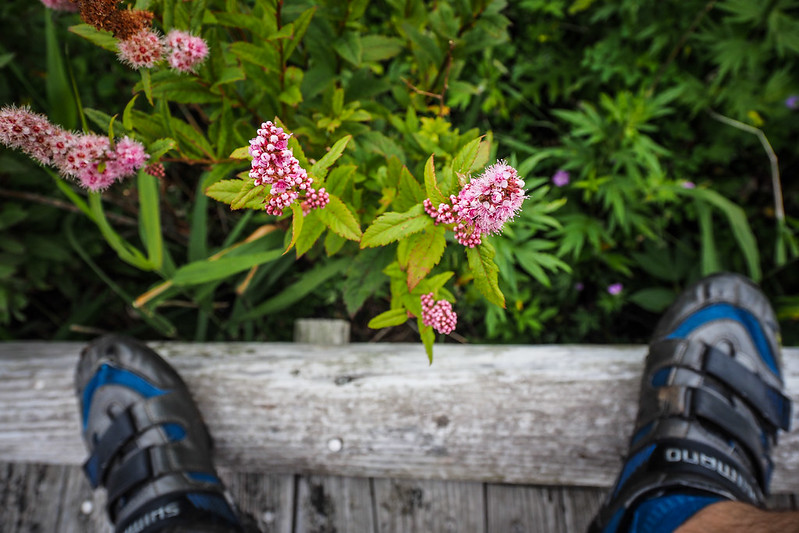 We would follow the very quiet Route 123 along the coast all day, and while the morning stayed damp with a slight fog… 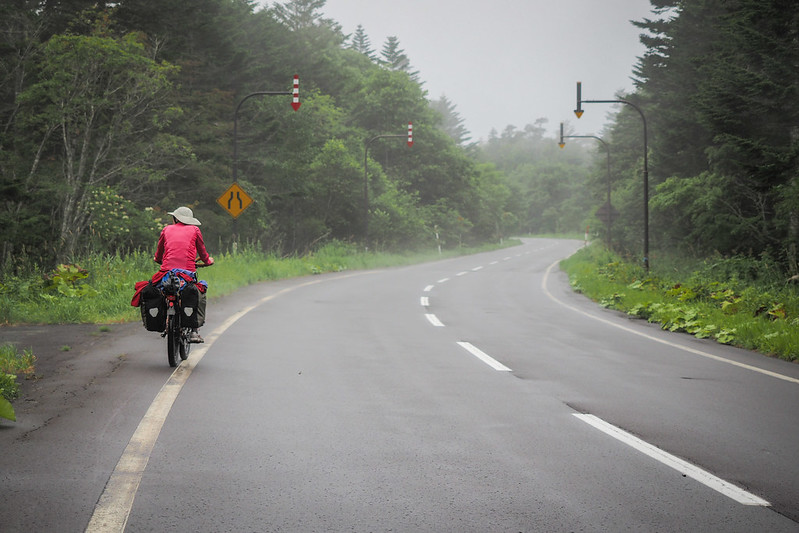 The day soon dried out as we cycled up and down the hilly coastal route. 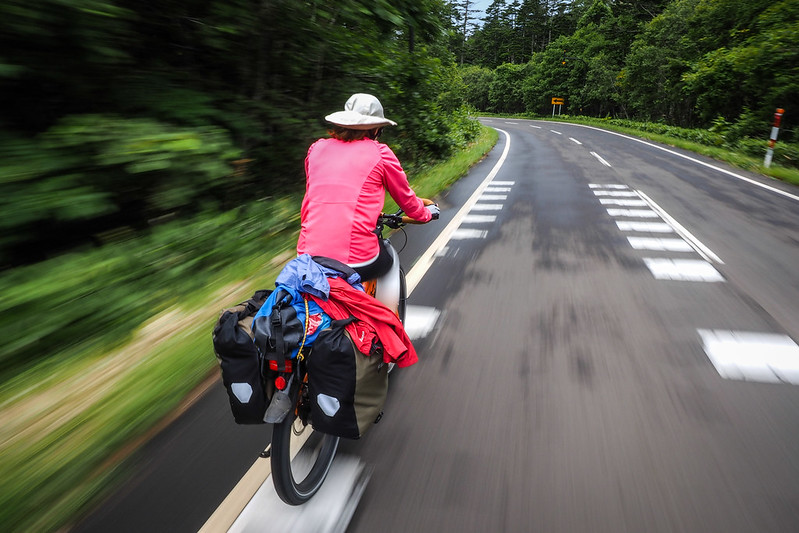 By the time we arrived in Akkeshi Town, however, the rain had returned with a vengeance. A right royal downpour, which had us scampering for the local michi-no-eki (Road Station – a rest stop for travellers). While we didn’t know it beforehand, it turns out Akkeshi is famous for its oysters. Which made lunch menu choices for Haidee rather limited, but for me, it was heaven.

I went for a deep-fried oyster and pork on rice bowl…phenomenally delicious. 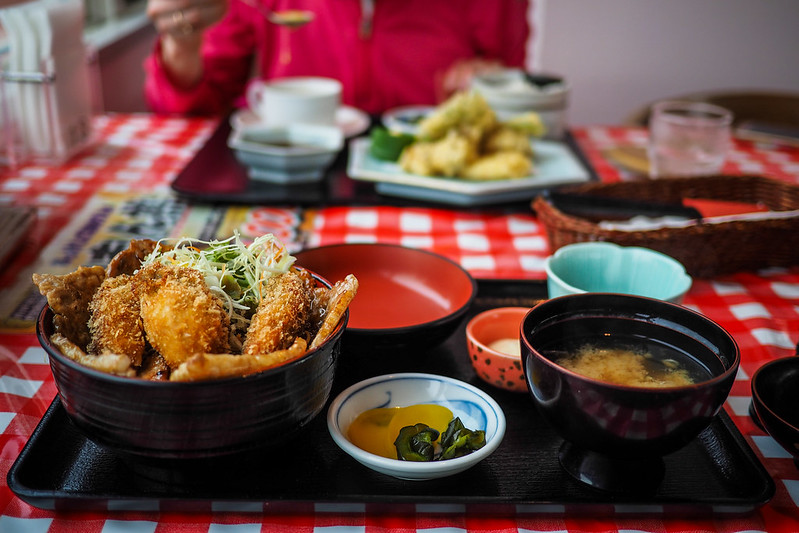 The camera didn’t get taken out for the remainder of the day. The rain still hadn’t stopped by the time we left the road station, but we knew we only had around 5km to cycle back to the local campground (Chikushikoi Campground). We stocked up on food at a local supermarket and got to the campground around 3pm. Amazingly, the campground had hot showers (pretty rare at Japanese campgrounds to have showers at all). A drenched cyclist’s dream.

The drama of the night came around 8pm or so, just after we had snuggled into our sleeping bags in our tent. The campsite manager approached our tent and insisted that we move to one of the bungalows. “We won’t charge you any extra, because look! Your tent is surrounded by water!”

Indeed, in places around our tent, the grass had about two or three centimeters of water puddling. I had chosen our site carefully, however, and figured we’d need to get about 10cm of water gathered before we’d get any significant puddles under our tent. In any case, I said OK sir, whatever you say sir, and he seemed happy to know that we would be moving into the bungalow.

The problem is that moving one’s belongings from a tent to somewhere else in driving rain is all rather bothersome. So I was only half-convinced by the prospect of shifting to the bungalow. Even so, just to make sure we were not missing out on five-star luxury for the price of a tent site, I dragged myself out of my sleeping bag and the tent to check the alternative accommodation out.

Opening the door, the place looked OK. Until I looked up. A 3cm wide spider had taken up residence in the bungalow, weaving a massive web, cordoning off the far right corner of the 3m x 3m bungalow.

I have a pathological fear of spiders, so it was quite clear that at the least I would not be sleeping in that spider’s nest that night.

I hurried off back to the tent, reported the situation to Haidee, and we resolved to stick it out in the tent and hope for the best.