There was more rain in the night, but it had all passed by dawn. We are all using tents owned by Haidee and I, and thankfully they all seem water-tight. Rowland and Alicia are using my ancient Kathmandu North Star Plus tent which I bought during a half-price sale in New Zealand in 2002. I used that 3kg behemoth of a tent on my cycle tour across the Eurasian Continent in 2006, so the tent is understandably showing signs of wear and tear.

31km on the bike before 10am. Now that’s my kind of morning. But there’s really no excuse not to when the sun rises at 4am! 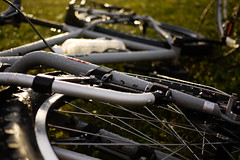 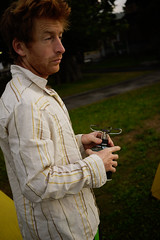 There was more rain in the night, but it had all passed by dawn. We are all using tents owned by Haidee and I, and thankfully they all seem water-tight. Rowland and Alicia are using my ancient Kathmandu North Star Plus tent which I bought during a half-price sale in New Zealand in 2002. I used that 3kg behemoth of a tent on my cycle tour across the Eurasian Continent in 2006, so the tent is understandably showing signs of wear and tear.

The seam sealing on the floor was peeling (replaced with some seam-sealer goop from Montbell), as is the seam sealing on the fly. The tent floor fabric itself has also lost most of its waterproof sealing. Roland and I tried to replace this also, using a special paint-on tent floor sealing product, but this generally just ended up a sticky mess. We ended up having to coat the floor with talcum powder on the morning we all left on the tour because it had not dried in time.

Haidee and I are in the great MSR Hubba Hubba tent we bought earlier this year. It is about 2kg, and is super fast to pitch. Quite unlike any tent I have owned in the past. Very happy with that purchase. Saoka is in my MSR Carbon Reflex 1 tent, kindly supplied by MSR to replace the great little MSR Microzoid tent I used on my longboarding journey across the US and China. I haven’t slept in the tent myself yet, but at around 1kg, and 100g lighter than the Microzoid tent (but with waaaaay more room), it looks to be a near perfect one-person tent. 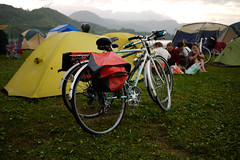 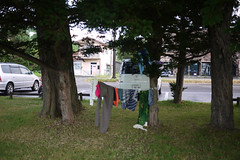 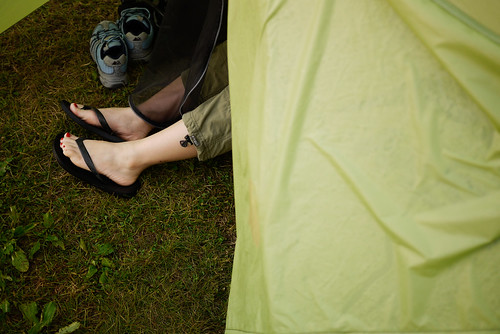 Today’s scenery was simply spectacular. Mt. Yotei, or “little Fuji” as it is known, cut quite the striking figure against a beautiful blue sky. 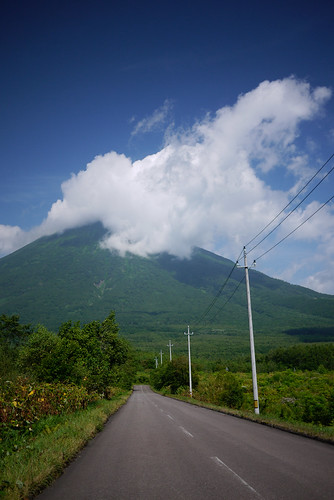 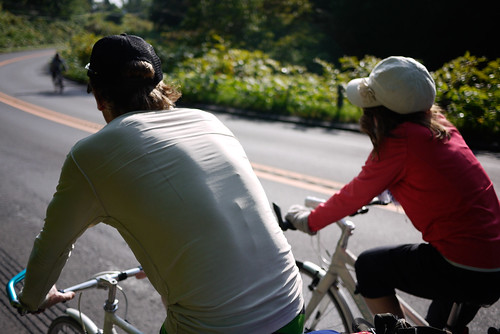 Once again we arrived at our ultimate destination for the day at around 10am. Kyogoku natural fresh water springs was the place. Quite nice indeed. Clear, ice-cold water gushes forth out the ground here in massive quantities. Locals come to fill 20 litre barrels by the trolley-load, Chinese and Korean tourists waddle around by the bus-load, and weary cycle tourists (that’s us) wander around enjoying the cool natural air-conditioning of the flowing waters. 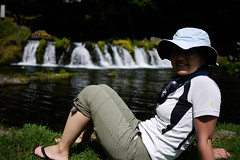 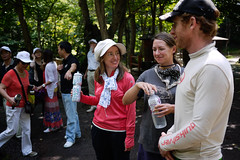 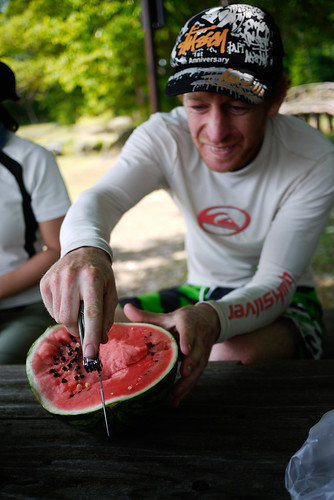 From the spring’s source, it is only a 5 minute walk to the Kyogoku Campground (500yen per tent per night). The water from the spring flows in a narrow stream past the campground, so we all egged each other on to jump in. I was one of the first, and within seconds my legs were cramping from the cold. Rowland followed, and was equally wracked with pain. Saoka wandered into the frigid water as if it was the most natural thing in the world, and proceeded to wander around in the water for at least 5 minutes. 5 seconds in that water and I was in excruciating pain…as was Rowland also. 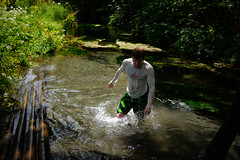 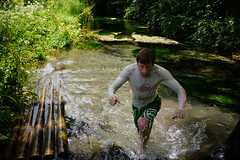 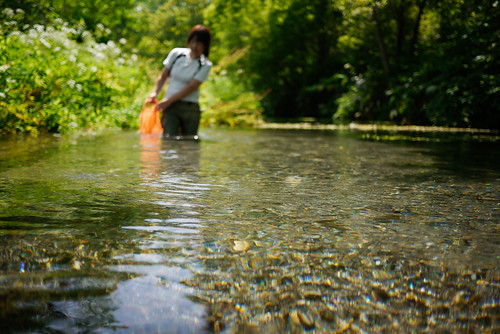 Splashing in the water was followed by pleasant but uneasy lounging in the grass at our campsite. Uneasy in the sense that the site was inundated with ants. Lying in the grass on sleeping mats was an exercise in frustration. 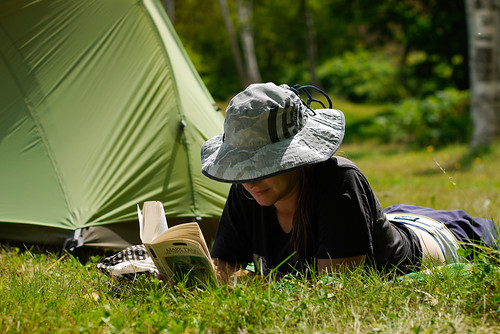 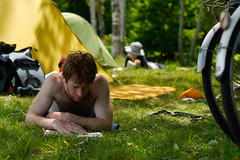 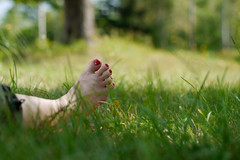 For food on this trip, we have been mainly eating lunches at cheap eateries (usually under 800yen each), and cooking our own dinners with items bought from local supermarkets. Dishes on the menu have included pasta, curry rice, and potato salads. Snacks have been mainly bought from convenience stores, which are to be found in almost any resemblance of a human settlement in Japan. Travelling by bike, camping, and organizing food in this way, Rowland and Alicia have found that it is much cheaper to travel by bike in Japan than it is to travel by public transport and staying at hostels/inns in Southeast Asia. 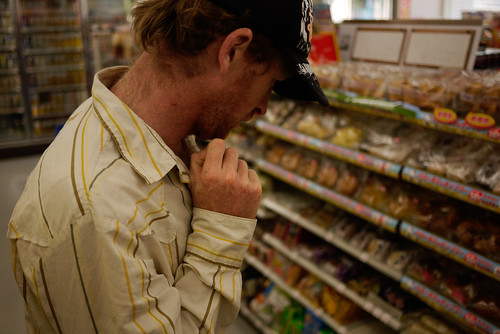 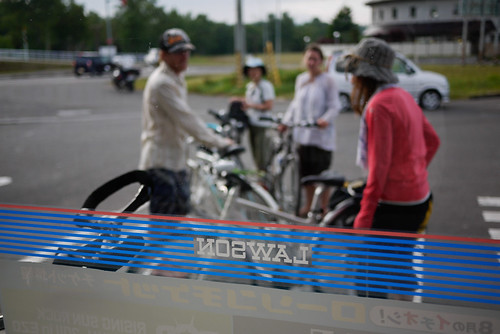 We did splash out a little today for dinner. Instead of cooking it ourselves, we biked 2 minutes to the local onsen complex next to the campground which served an array of cheap, delicious food. Most dishes were under 600yen, and even though the beer was a little on the steep side (450yen for tap beer), it was a nice relaxing way to enjoy the evening. I went for a cold dish; soba noodles with dipping sauce. 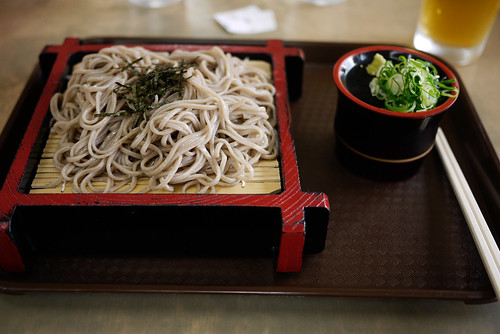 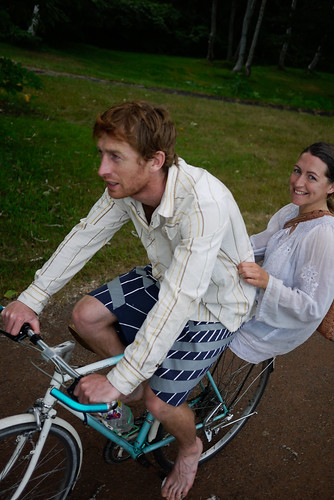