There are some great cycle shops in Sapporo City, where Haidee and I live. Some are better than others, and usually it’s not the stuff they stock that makes them great. It’s the people working there. Nakamura Cycles is one such shop. Mr. Nakamura himself – the owner – seems stressed most of the time and always in a rush, so I’ve never had much of a conversation with him. But Ken Sarai, one of the long-time mechanics at the shop is a great guy, and often has nice tidbits of information for great bikepacking routes in Hokkaido. One time I was in the shop talking to him about Haidee and I’s ill-fated Hobetsu adventure, and he mentioned in passing a place called Niniu. “It’s like a forgotten world,” he described it. “Like they just dropped their tools and left.”

Looking the place up on my map back at home, the area did look interesting. A warren of half-finished closed and unconnected roads, with one massive new expressway bypassing the lot. I decided I just had to visit there some day.

And that day was today.

No sooner had we turned off the main road past Shimukappu did we find ourselves in an eerily deserted world. There had obviously been some serious public work done in recent history, but now the place looked abandoned. 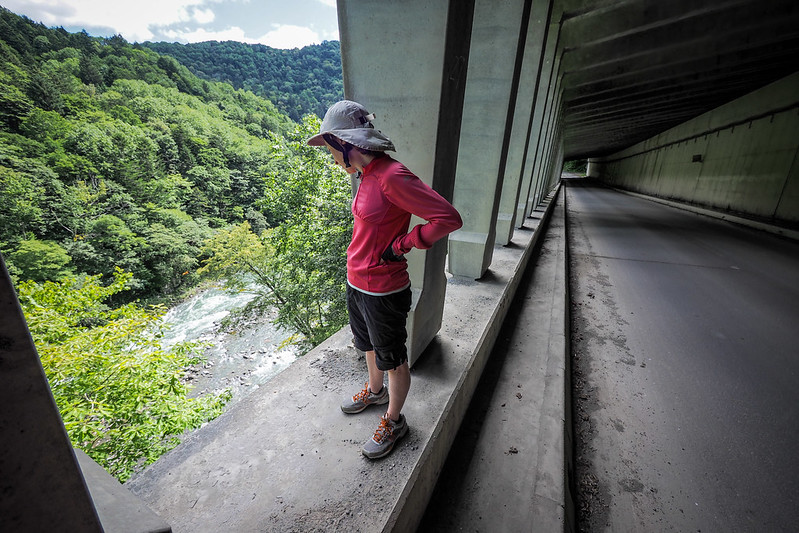 The only traffic we saw for most of the morning was a postman Pat-esque red postal van scurrying around the winding track.

The wild river was a refreshing sight, even here in Hokkaido, where hillside reinforcing and retaining walls often mar the landscape.

We really felt like we had the road to ourselves. 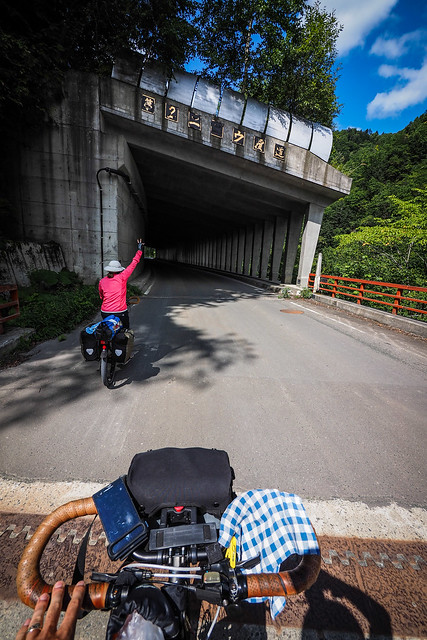 We had originally entertained the idea that we might be able to get to Hobetsu Campground – our destination for the night – by lunchtime. By lunchtime we were still meandering along our own private road, so we stopped in at the Niniu Campground to find shade and a spot to cook up some pasta for lunch.

The campground charged a 200 yen per person day use fee, but it was well worth it. We spent about two hours lounging in the cool shade of the trees. 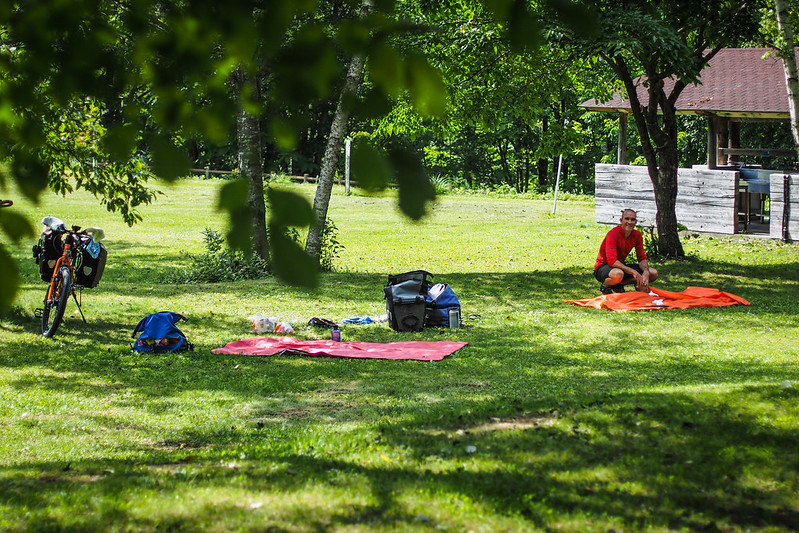 After lunch it was bear-bells on the handlebars… 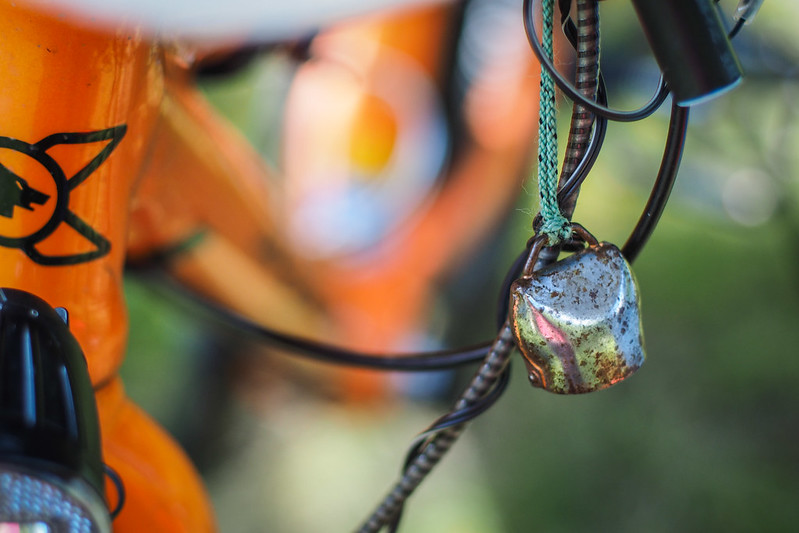 And onwards towards the beginning of a 10km stretch of abandoned, now closed-to-traffic road. 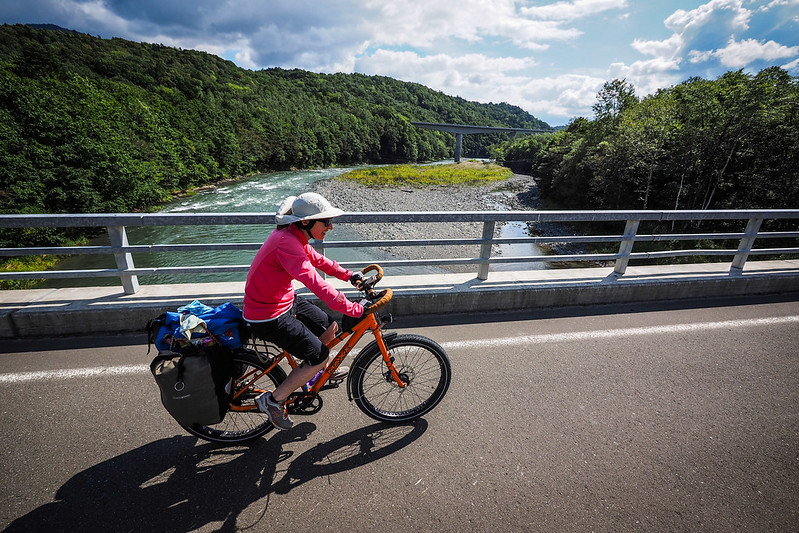 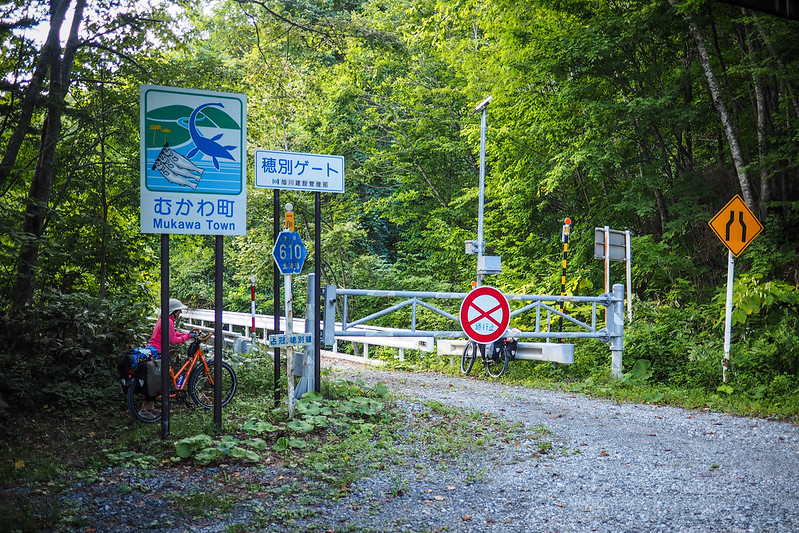 The bear bell, in case you were wondering, is to let bears know we are coming. The brown bears of Hokkaido are ever so slightly smaller cousins to the American grizzly, so erring on the side of caution when venturing into not-so-often-trod areas of Hokkaido. And by the looks of things, not many people had come this way in a while. 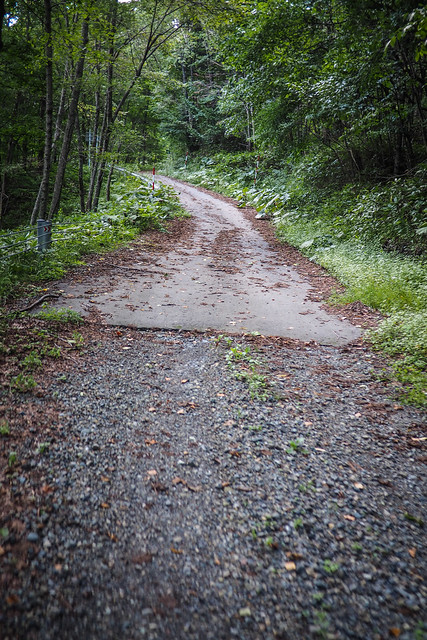 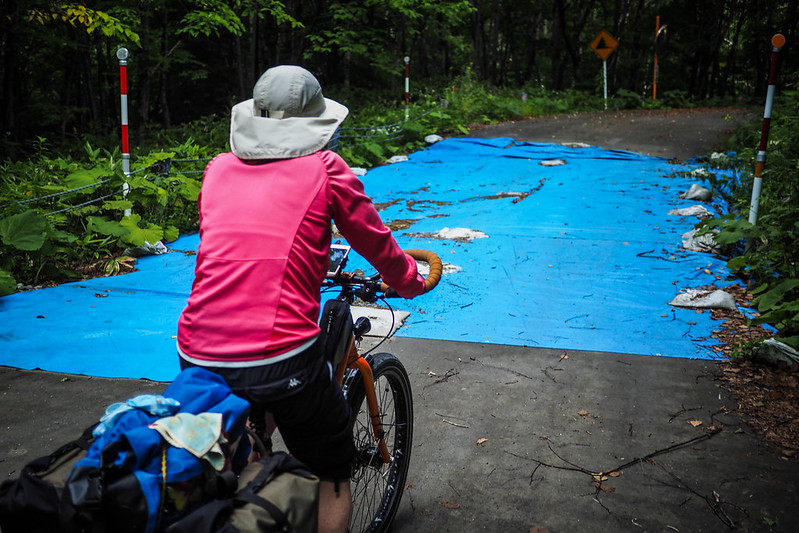 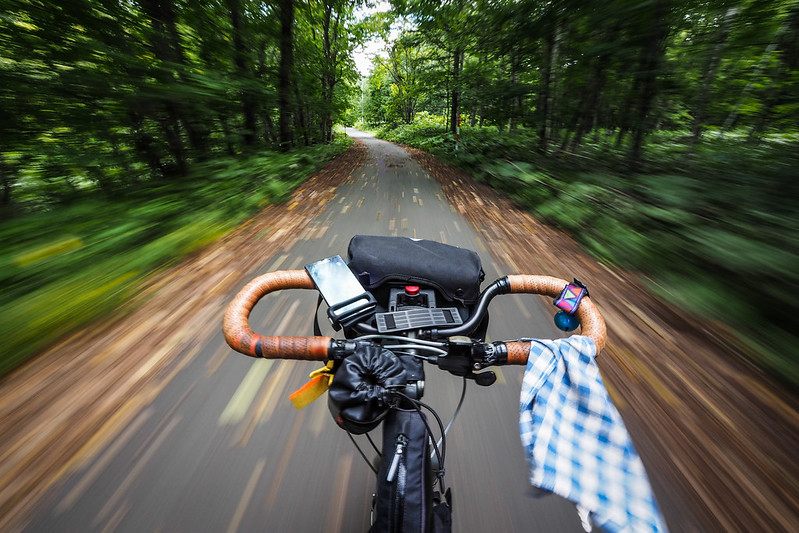 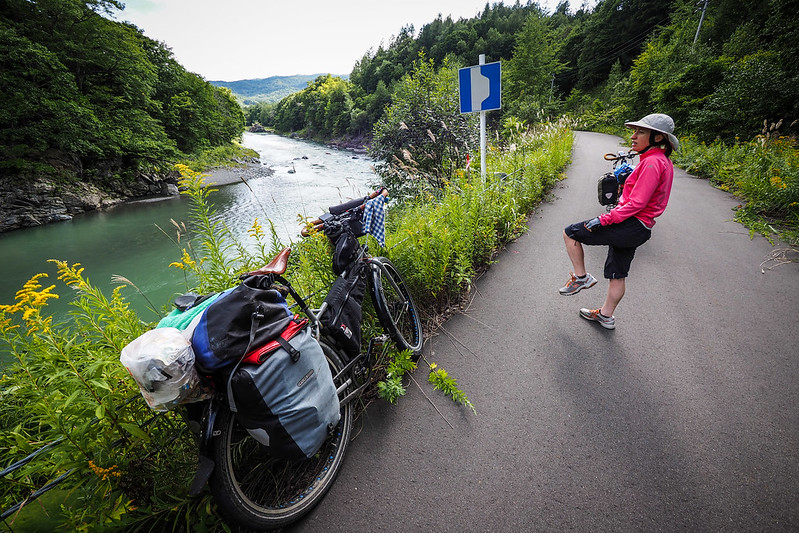 It was a curious sort of road. Clearly there had been great intentions to make it a two-lane route: In parts, there were big wide two-lane bits of road. In others places it was paved single lane, and yet others were just gravel. Curiouser and curiouser. 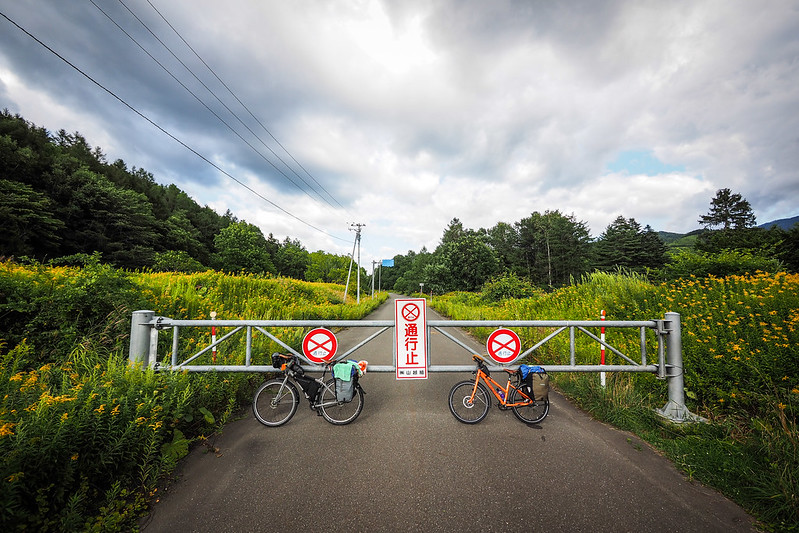 As we were clambering around the road-closed gate, we saw about 20 university under-grad cyclists (at least they had that air about them) grind up the incline towards Hobetsu campground. Upon asking a couple of them (two who had fallen by the wayside, exhausted), they confirmed our wondering: they were a group of 50 cyclists, all headed for the same campground.

As we inched up the uphill, some of the fitter-looking members were flying back down on pannier-less bikes, only to appear from behind us moments later powering back up the hill with someone else’s pannier strapped to their bikes. They obviously had a mix of abilities in the group… 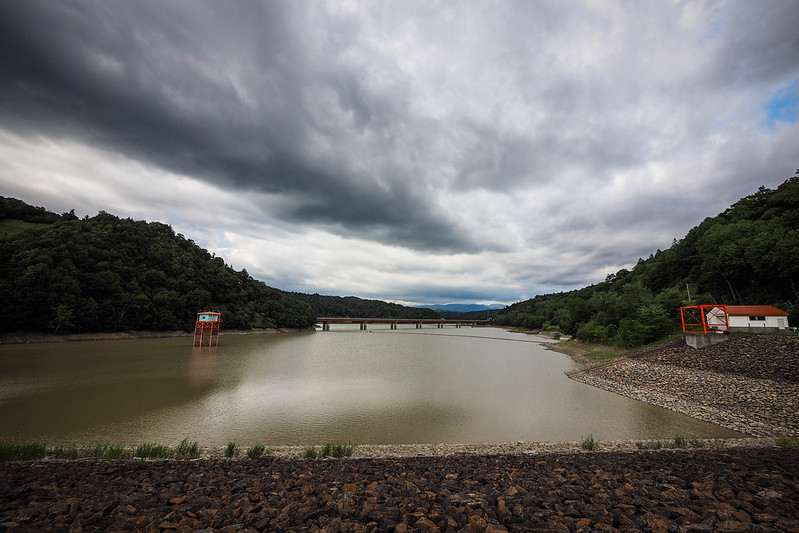 Soon enough we rolled up to the Hobetsu hotspring spa (not the photo above…that’s Hobetsu dam). There were exactly 50 bicycles parked out front. We played the waiting game, and sat around outside for 30 minutes in the shade. By the time 30 minutes was up, the university students were trickling out. The strategy worked. We were able to enjoy a very nice soak in the hotsprings sans gaggles of undergrad cyclists. 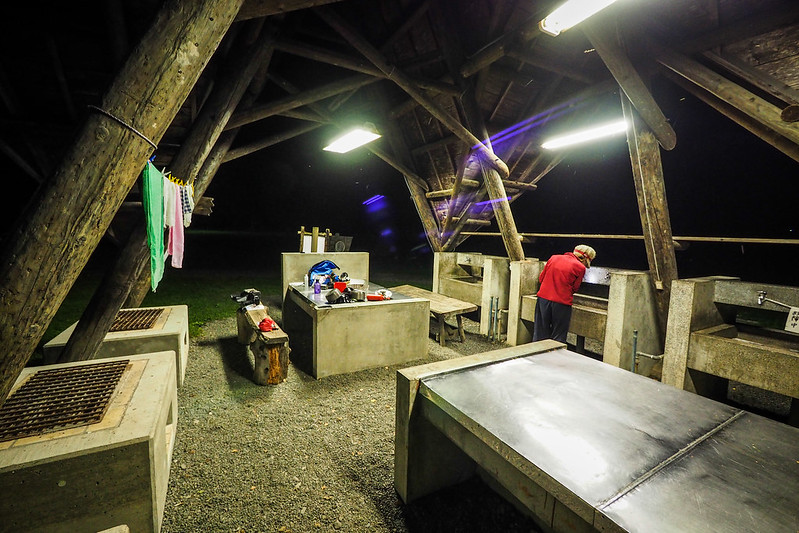 Although last time we were here, we didn’t have the company of a cheeky fox. This guy was happy to pester us from about a meter away until he figured out we weren’t giving him any food. 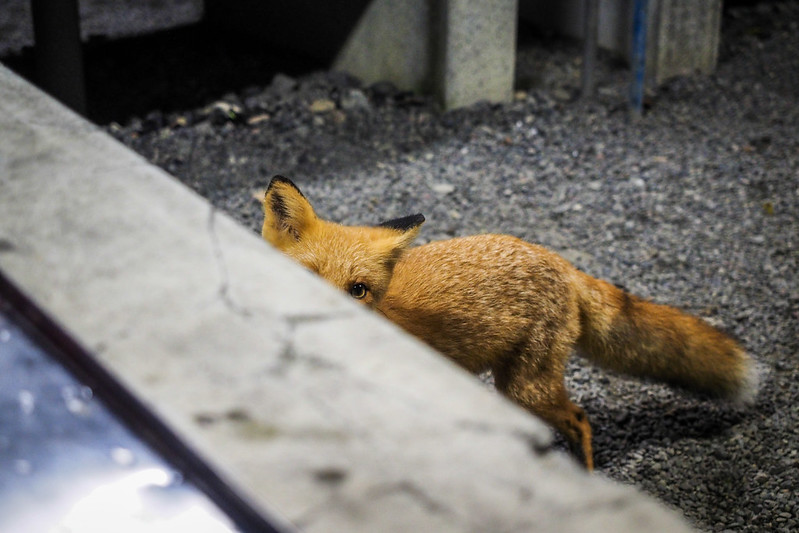 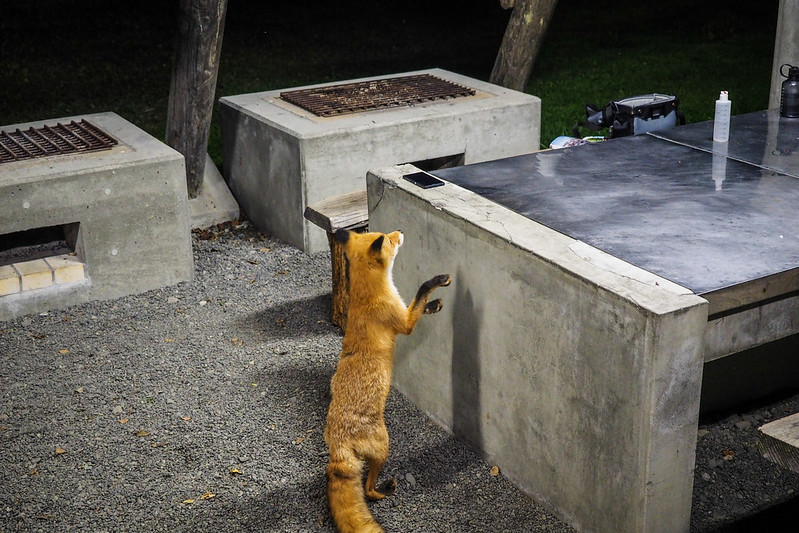 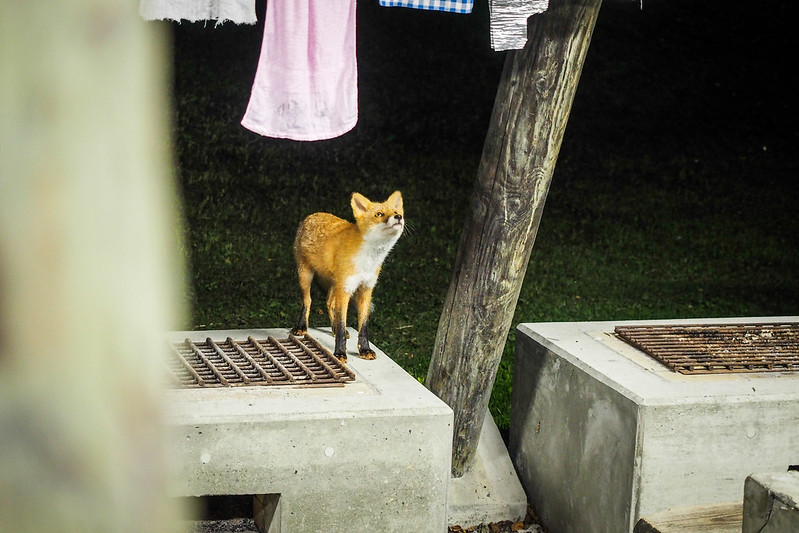 After posting photos of him on Facebook that night, we learned that around 50% of foxes in Hokkaido carry the echinococcus parasite. This nasty parasite gets into a human’s system through the feces of a fox, ensconces itself in the poor human’s liver, and will slowly kill said human. There is no cure, but sometimes sufferers get lucky with invasive surgical removal of bits of their innards. Not a nice thing to have.

So we kept things extra clean after finding that out.

Dinner tonight, by the way, was pumpkin soup. Delicious, if I do say so myself. 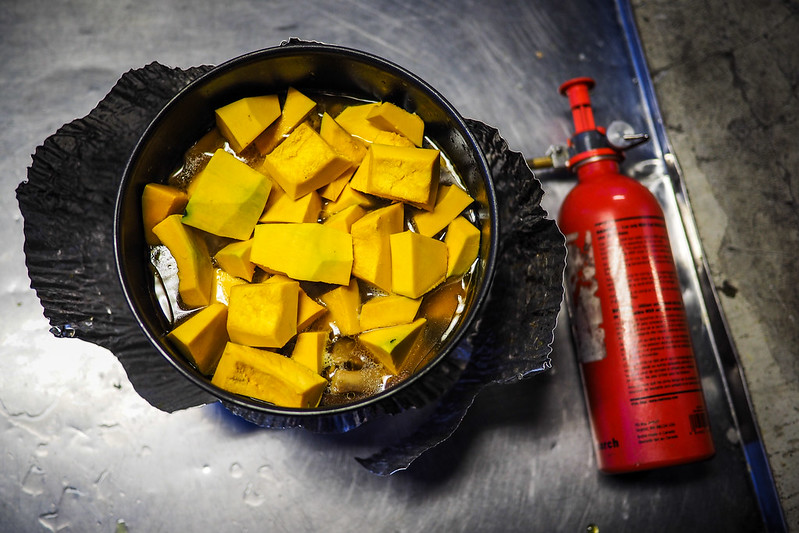