by Rob Thomson
1 0
What is the Daisetsuzan Grand Traverse? It is a 5-8 day hiking trail spanning the length of the Daisetsuzan National Park, Japan's largest national park, situated in central Hokkaido, Japan. It's Hokkaido's most iconic thru-hike, one of the best alpine traverses in Japan. Here, I get into the nitty-gritty of just what constitutes a 'Grand' traverse of the Daisetsuzan Range. A commonly accepted version has hikers walk between Asahidake or Kurodake in the north, and Furano-dake in the southern Tokachi Range. Here we introduce the idea of an extended 'full' Grand Traverse, trekking the full alpine spine of Kamuy Mintar, Daisetsuzan, Hokkaido's Playground of the Gods. Involving a complete south↔north traverse between Genshigahara and Aizankei, this purist's approach will appeal to experienced hikers seeking to fully experience the Daisetuzan Range. At the end of the post, I also give a brief glimpse into the early history of inspiring traverses in the Daisetsuzan National Park.

Do a web search for ‘Daisetsuzan Grand Traverse’, however, and you’ll find a number of different accounts, with different starting and ending points. Some might start at Asahidake in the northwest and end at Tokachi-dake Onsen in the southwest, going out of their way to bag Furano-dake to make it a ‘complete’ traverse. Some might start at Sounkyo in the northeast and end early at Shirogane Onsen in the south without touching Tokachi-dake. Others still might call it a day at Tokachi-dake.

Consensus, however, is unequivocal. For a traverse along the Daisetsuzan Range to be ‘Grand’, it must start (or finish) at either Asahidake or Kurodake in the north, and include Furano-dake in the south. The Daisetsuzan National Park Council defines it as such. The current record holder for the fastest time to traverse the range, pro skimo racer Ken Fujikawa, also defines a full traverse as Furano-dake to Asahidake. He skied the 60km distance in 13 hours and 21 minutes in May 2016 (source).

See the graphic below by HokkaidoWilds.org (PDF version here).

Genshigahara↔Aizankei is a purist’s definition of a ‘full’ Daisetsuzan Grand Traverse. This takes in the full ‘spine’ of the Daisetsuzan Range, with no omissions. Allows the hiker to experience a full palette of the Daisetsuzan Range’s natural diversity. However, public transport limitations exist. Extra days spent in exposed alpine areas means increased probability of encountering deadly storms. These make this ‘full’ traverse a tall ask.

If convenience, brevity, or comfort are sought, a slightly shorter version of the traverse starts in Asahidake or Kurodake, and ends with Furano-dake, descending to Tokachi-dake onsen. This alternative still captures a broad experience of the Daisetsuzan’s volcanic diversity, and have better public transport options and less time exposed to storm risks.

There is a deep recorded history of traverses in the Daisetsuzan Range by Japanese mountaineers and skiers, dating back over 100 years. 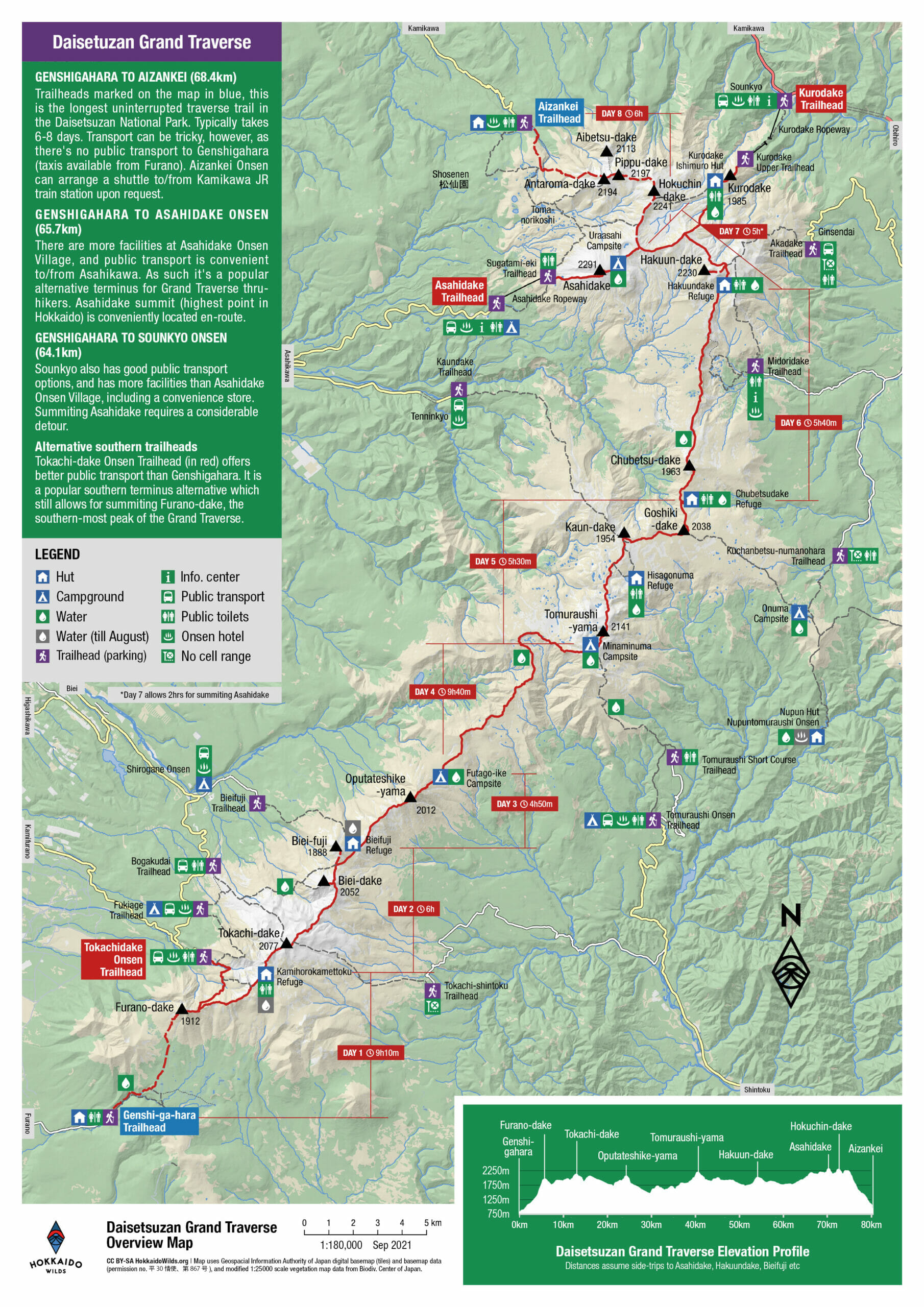 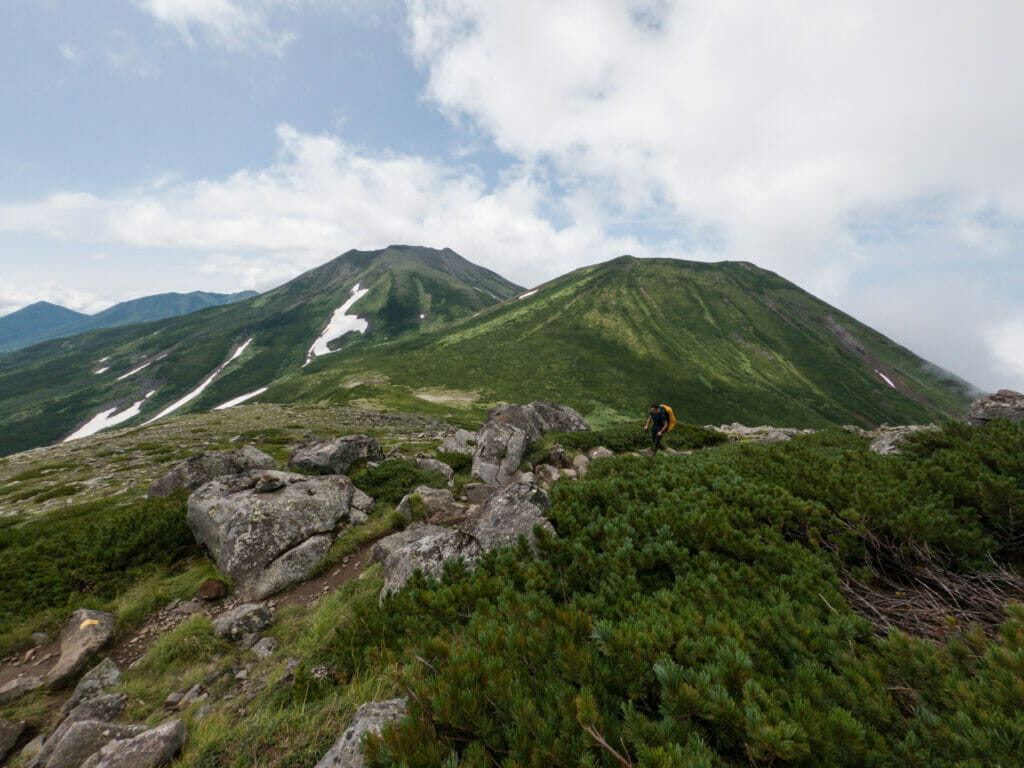 For the purist, however, local guides we’ve spoken to believe there’s only one definition of the Daisetsuzan Grand Traverse: Genshigahara to Aizankei Onsen (or vice-versa, see discussion on direction below).

At the most basic level, this is the longest traverse by distance. The Daisetsuzan National Park Council pegs it at 68.4km (see their PDF map here; distance does not count any side-trips along the way to bag peaks). More than that, however, it allows for a full traverse of the the high ‘spine’ of the range. The high peaks of Hokuchin-dake 北鎮岳 (2244m), Pippu-dake 比布岳 (2197m), Antaroma-dake 安足間岳 (2194m) and the volcanic red-scorched knife-edge ridge that connects the latter two, are an inspiring part of the range that would be completely omitted if favouring a direct start or finish via Asahidake or Kurodake. Heading to (or starting from) Aizankei allows for more time at altitude, skimming across the roof of Hokkaido for just that little bit of extra time. Arguably, heading to Aizankei is more challenging, and a truer traverse in the sense that the trail continues to follow the ridgeline of the range for further distance. If one heads for Kuro-dake at Ohachidaira, you’re essentially already on your way down off the roof of Hokkaido. If one heads up and over Asahidake and descends down to Asahidake Onsen, then part of the high-level traverse is omitted in favour of brevity or convenience.

Important to note is that Aizankei Onsen is not the northernmost trailhead in the Daisetsuzan Range. The northernmost trailhead is at the bottom of the Kurodake Ropeway in Sounkyo. Following the topographical spine of the range, however, arguably leads us to Aizankei Onsen. As for the southern terminus of the traverse, in the purist sense it can only be the Genshigahara trailhead. This purist definition is not just for purism’s sake. There is much to be gained by committing to a full traverse. The Genshigahara sub-alpine marshlands in the south are a natural wonder in their own right. Vast peaty wetlands gradually rise up towards the volcanic peak of Furano-dake. Think hard before missing this area. Likewise, in the north, the descent towards Aizankei from Antaroma-dake, as well as the red, orange and white striped kinfe-edge ridges, are spectacular. Take the Tomanorikoshi descent (or ascent) through the sub-alpine wetlands directly south of Aizankei, and you’ll add to an already diversity-rich traverse. 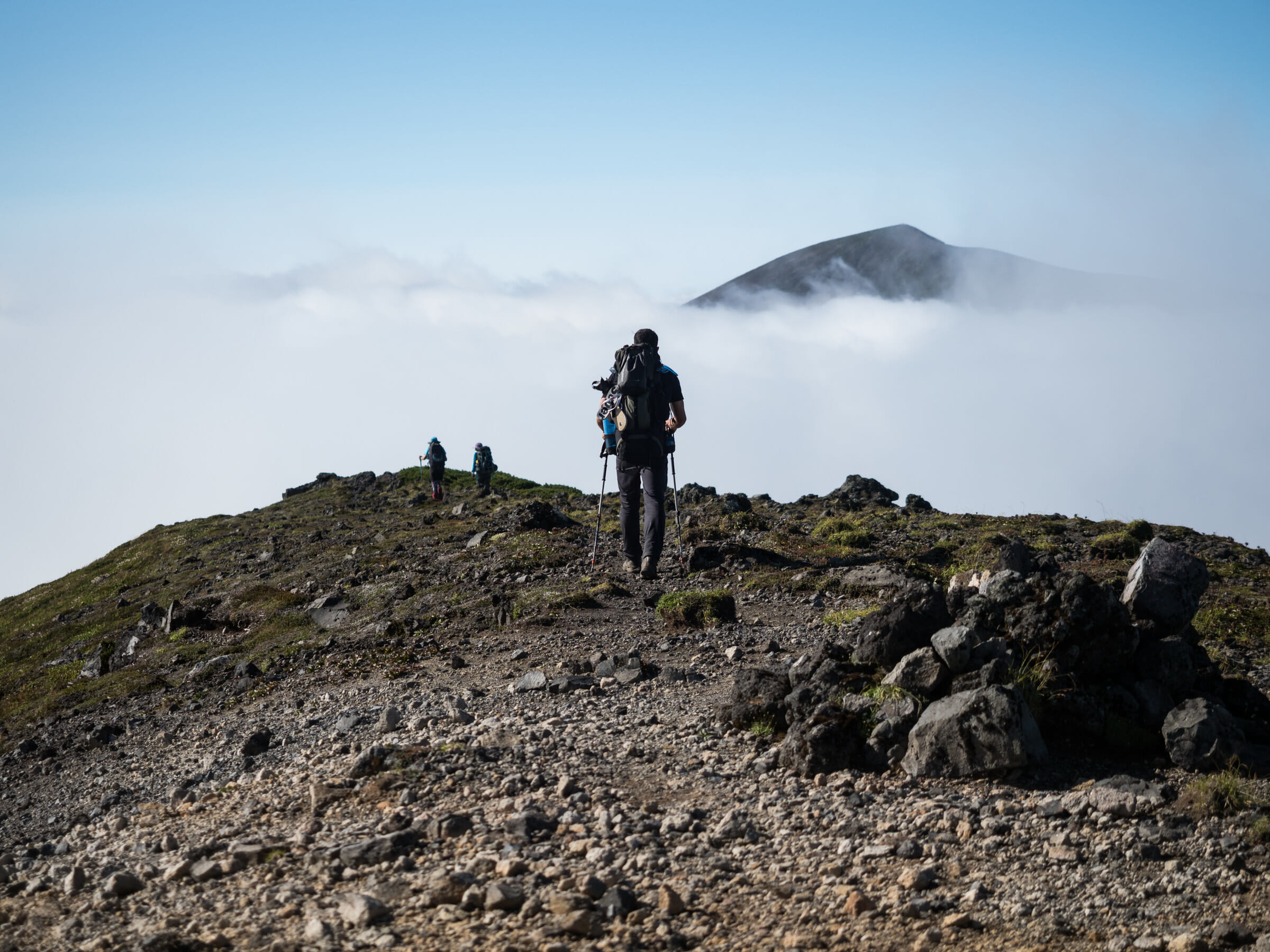 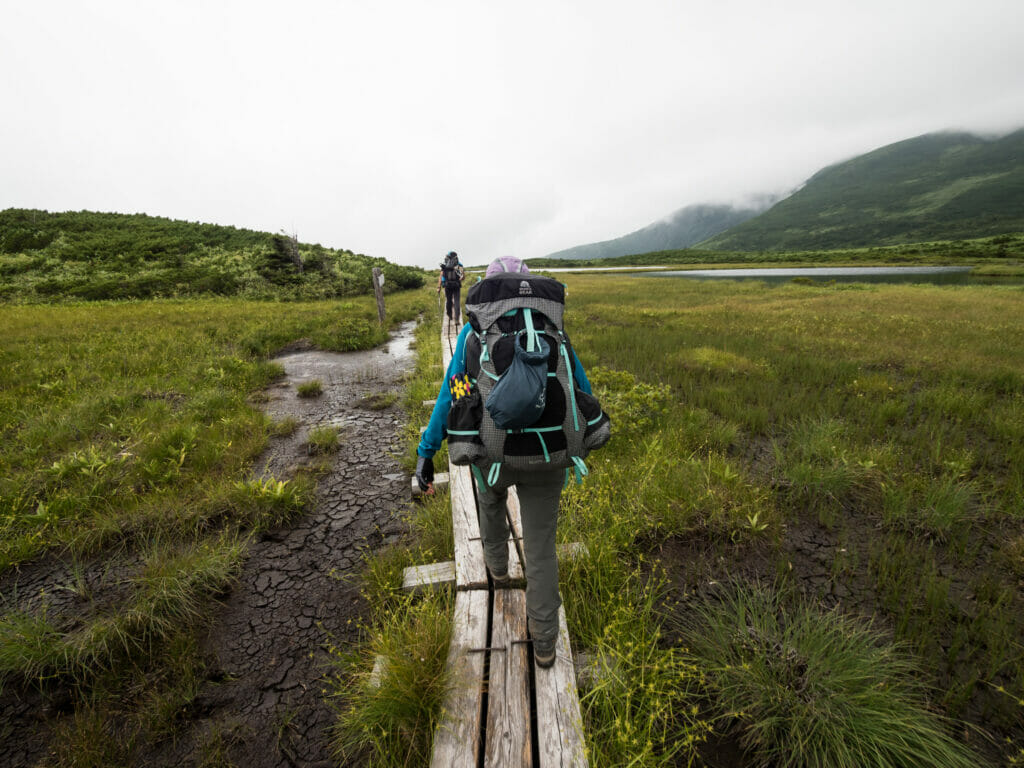 Inconvenient practicalities of a ‘FulL’ traverse

The Genshigahara↔Aizankei ‘full’ traverse is not without its drawbacks, hence the more mass appeal of the more traditional, abbreviated versions of the travese. 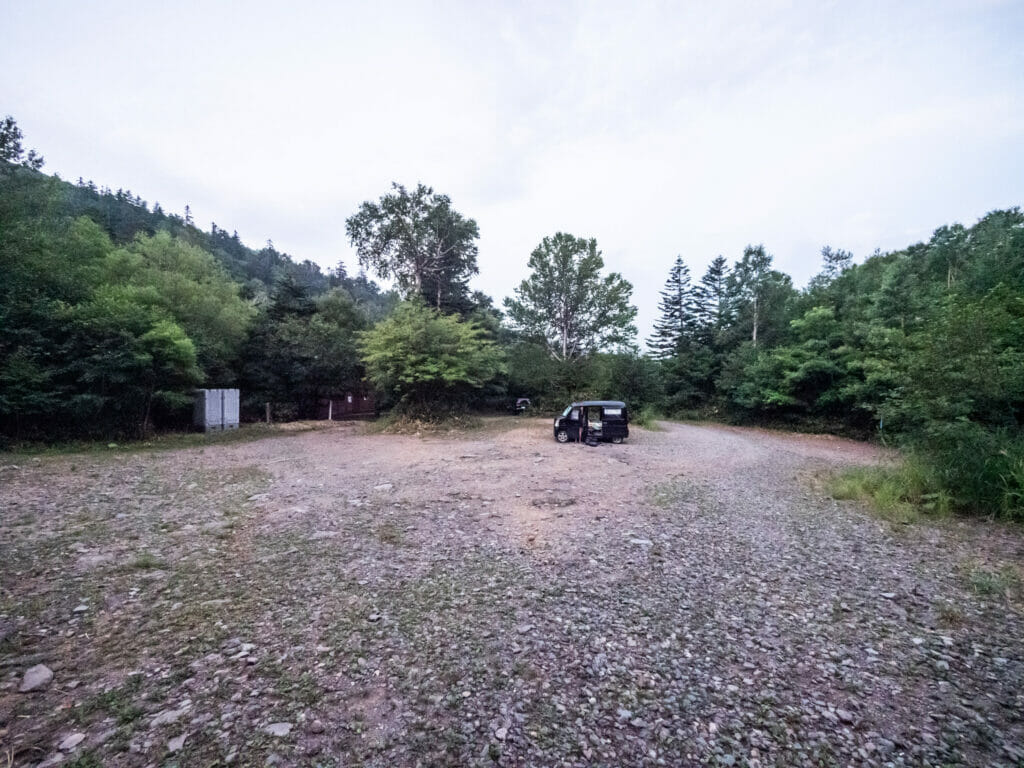 North to south is most popular
Regardless of how you choose to traverse the Daisetsuzan Range, most Daisetsuzan Grand Traverse hikers tend to start in the north and walk south. This is because there are two ropeways in the north. If one seeks brevity, convenience or comfort, taking either the Asahidake or Kurodake ropeways will avoid the hefty ≈1000m climb to the alpine at the start of the traverse.

If attempting the full traverse, south to north is best
If your plans involve the full Genshigahara↔Aizankei Grand Traverse, there are no ropeways to assist the ascent to the alpine. So while you could walk in either direction, I’d heartily recommend starting at Genshigahara and walking north. There’s a couple of reasons for this. There is a rich history of ambitious and inspiring traverses of the Daisetsuzan Range. Below, I give an abbreviated early history of those traverses. This is an abridged translation of 大雪山登山史(Daisetsuzan Tozan-shi, History of Mountaineering in Daisetsuzan) by Shugoro Ito.

Japanese poet Keigetsu Omachi completed one of the earlier traverses along the Daisetsuzan Range in August 1921. He walked from Sounkyo to Tenninkyo. At the time there were no hiking trails. His account was widely published in Japan, and this account, from which the now-iconic quote above comes, is seen as the point where the name Daisetsuzan became recognized within Japan.

Stone tools found at the summit of Hakuun-dake and Koizumi-dake, however, suggest that the Ainu people had already travelled to peaks in the Daisetsuzan Range, perhaps for hunting, far before the Japanese ever ventured into the range. Furthermore, preceding Omachi by almost 70 years, the earliest recorded ascents of peaks in the Daisetsuzan Range were made by Ichitaro Matsuda, an Ishikari civil servant, in 1857.

It wasn’t until the late 1800’s that records of longer traverses in the range started to appear.

In 1884, a team of government surveyors led by Naritoyo Fukushi made an ambitious traverse south to north. He and his team followed the Biei River to the Daisetsuzan alpine plateau, and traversed from Oputateshike to Chubetsu-dake (via Tomuraushi-yama and Kaun-dake), descending off the plateau via the Chubetsu River.

For many years, however, until the 1920’s, many of the more well-known traverses were most commonly from Asahidake to Tenninkyo Onsen (north/south), or Teninnkyo to Ishikari-dake (west to east). It wasn’t until later that climbers began attempting longer traverses to or from Tokachi-dake towards Asahidake.

Then ski touring began in the Daisetsuzan range from 1921, largely spearheaded by the pioneering exploits of the Hokkaido University Academic Alpine Club. 1923 is widely seen as “the year of enlightenment” in Daisetsuzan, where much improvement in access was undertaken. This included trails between Asahidake and Kurodake, and the building of Asahidake and Kurodake stone huts. Around this time, however, spring skiing was still the vehicle for much exploration. The first ever recorded traverse from Tokachi-dake to the northern end of the range was May 1926, on skis. It took a team of four six days to ski from Fukiage Onsen to Tenninkyo Onsen (or Matsuyama Onsen, as it was known then) via Tokachi-dake, Oputateshike-yama, Tomuraushi-yama and Kaun-dake.

The first extensive summer traverse was in July 1927, with a traverse from Fukiage Onsen to Kurodake over 14 days (that same traverse was completed on skis in May 1930). This 1927 summer traverse would mark the beginning of a long heritage of recreational traverses in the range, including a full traverse along the range (taking three weeks) by the Academic Alpine Club of Hokkaido University in the deep winter of 1937 (Fedman, 2009).

More recently, history was made by Ken Fujikawa, a local Hokkaido ski endurance racer phenomenon. In May 2016, he skied the 60km of the Daisetsuzan Grand Traverse in 13 hours 21 minutes, the current speed record. He started in Tokachidake Onsen, and summited Furano-dake before speeding along the range to Asahidake, finishing at the base of the Asahidake Ropeway. “My top speed was 67km/h,” he writes, recounting his descent down the eastern face of the remote Oputateshike-yama オプタテシケ山 (2012m). Regardless of ‘which’ Grand Traverse one chooses to attempt, it will be impossible to ignore the dramatic, wold diversity of landscape, flora and fauna that makes up the geological wonder that is the Daisetsuzan Range. No two days are the same in this volcanic wonderland. A curious mix of Icelandic volcanic plateaus, Siberian forests and marshlands, New Zealand’s World Heritage active volcanic peaks, and the rugged Scottish highlands, this is a place that gets under your skin. A brutal alpine wilderness that demands respect but rewards respect with benevolent serenity and poise. 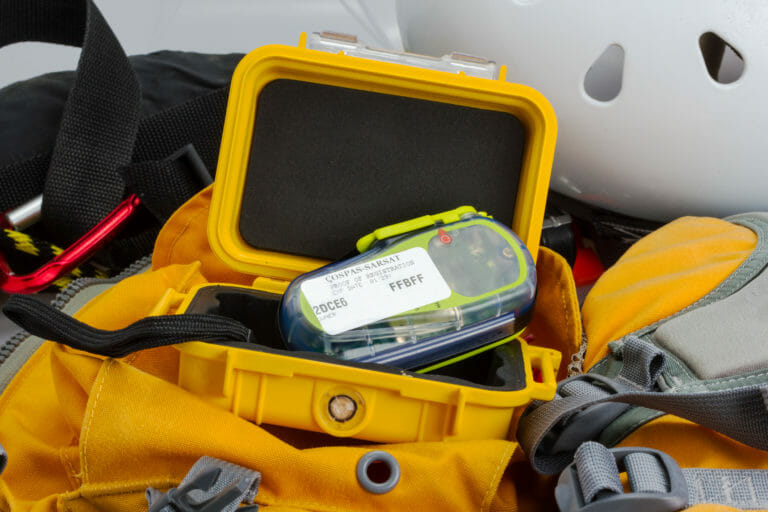 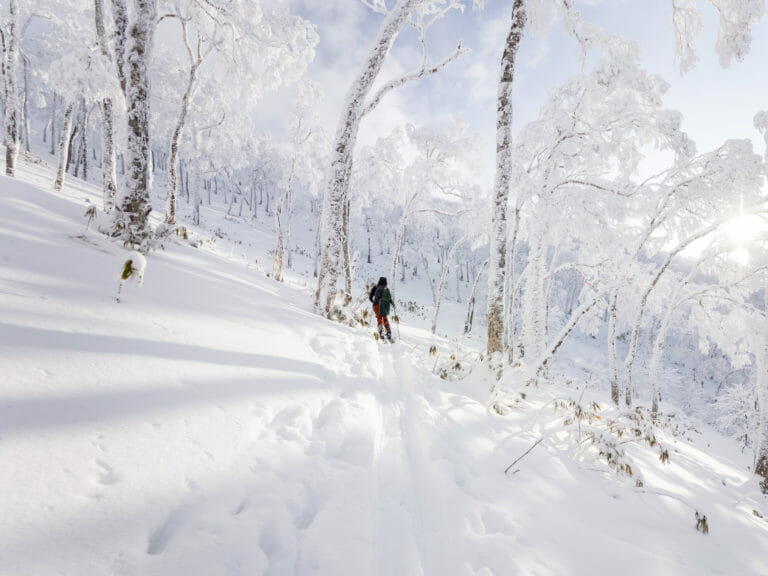