by Rob Thomson
Share on facebook
Share on reddit
Share on twitter
Share on google
70 0
Reading time: 5 min
"It feels like the depth of winter in January!" Rick exclaimed as we set off into the hills, wading through deep, soft snow. Rick had suggested this trip, leaving from the Nakayama Pass rest area 2 hours southwest of Sapporo City, in order to see what the early winter conditions were like this year in the hills. In short, they were well and truly winter-like conditions.

Dirk, the German, greeted me earlier that morning at Sapporo Station with a laugh. “Why didn’t you bring your skis? You’ll regret it later!” I wasn’t 100% convinced, as Rick, the Brit, had mentioned that he wasn’t sure there’d be enough snow to cover the ubiquitous sasa bamboo in the hills. Dirk brought his skis anyway. “Surely with all this snow in the city, the hills will be perfect!”

Jeff, the Alaskan, arrived in his four-wheel drive station wagon just after 7am to pick us up. Unfazed as ever of the below-freezing morning temperatures, he hopped out of his car in sandals and a t-shirt, and helped us get our gear into the car. Soon after picking Rick up from his place, we were out of the city and heading towards Nakayma Pass. 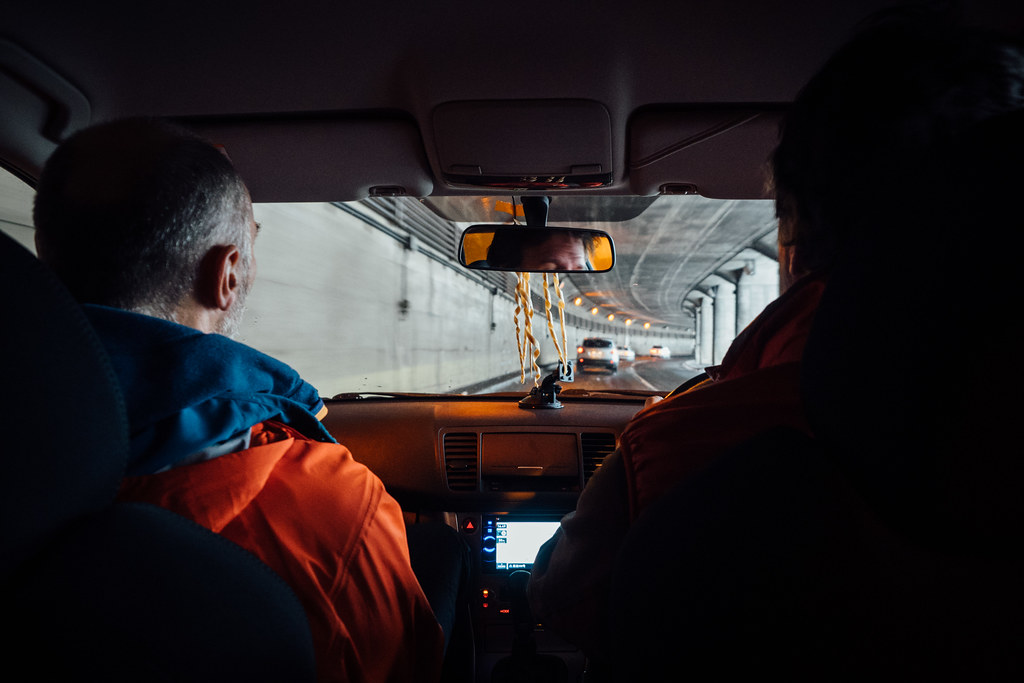 While the weather in Sapporo was clear, it quickly became obvious that we’d not be enjoying clear skies in the hills. We arrived at the top of the 835m high Nakayama Pass in low visibility, a stiff breeze, and well below freezing temperatures. We were all keen to get out of the exposed car parking area and into the relative shelter of the forest. 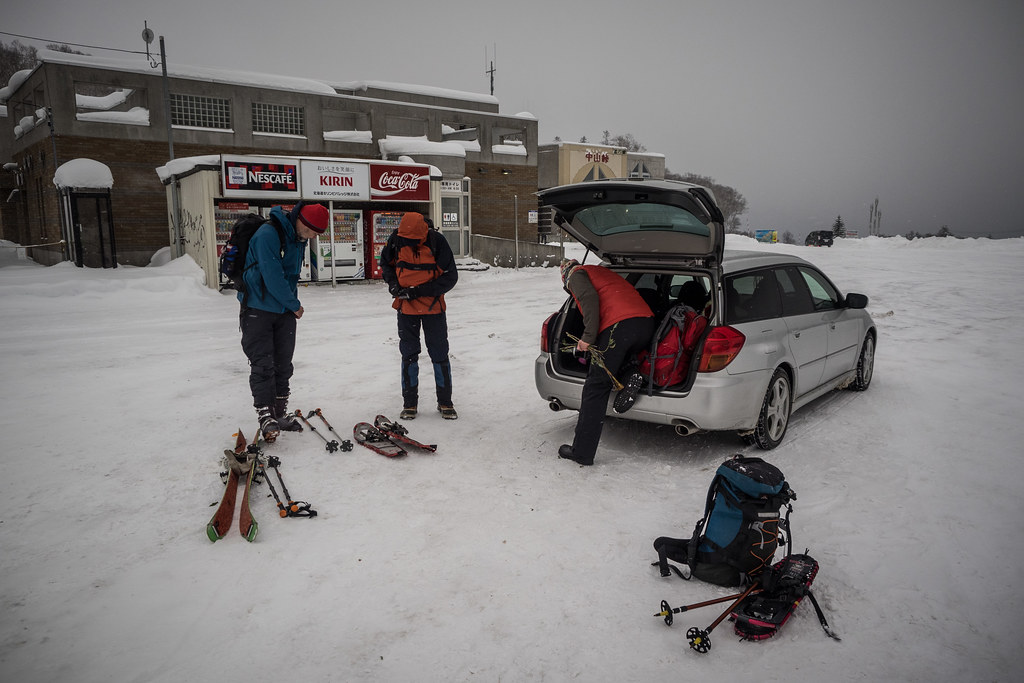 The rough plan was to scout out a winter route from Nakayama Pass up to Mt. Kimobetsu-dake. Rick, a keen man of the outdoors, noted that there was a summer route from the pass, but it wasn’t marked on any winter backcountry guides. The entire route would be on a very mellow wide ridge, so it should be straight forward, he said.

The first section of the route followed a dirt road up to a radio tower, so it was easy going. Almost too easy going for my liking. At times like this I just want some music in my ears and to get into a rhythm. The great excitement of this section for me, however, was that my camera, an Olympus OM-D E-M1, stopped taking pictures. I resigned to not having a camera for the trip, but soon after, I thought that perhaps the shutter had frozen shut. This was, after all, the first below-freezing trip I had taken the camera on this season, and prior to that it had spent most of the time indoors, where humidity could have built up inside the camera.

Sure enough, when I removed the lens, the shutter was still closed. A light touch was all that was needed to release it, and get it going again. Soon after, the shutter got stuck again, so I gave the camera a tap to release the shutter, and spent the rest of the trip taking photos using the electronic shutter instead (thank goodness for the recent E-M1 firmware update!). 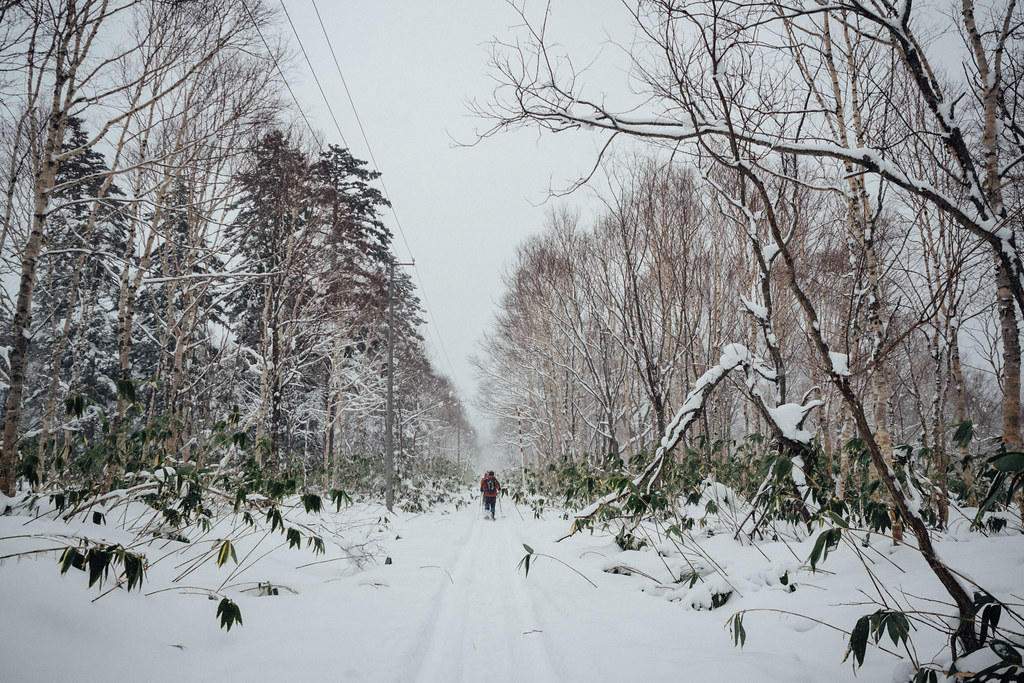 Soon after we finished the 2.5km or so from the pass to the radio towers, Rick took a bearing using a compass and map that would hopefully take us towards Mt. Kimobetsu-dake, roughly following the relatively sasa-clear summer route. 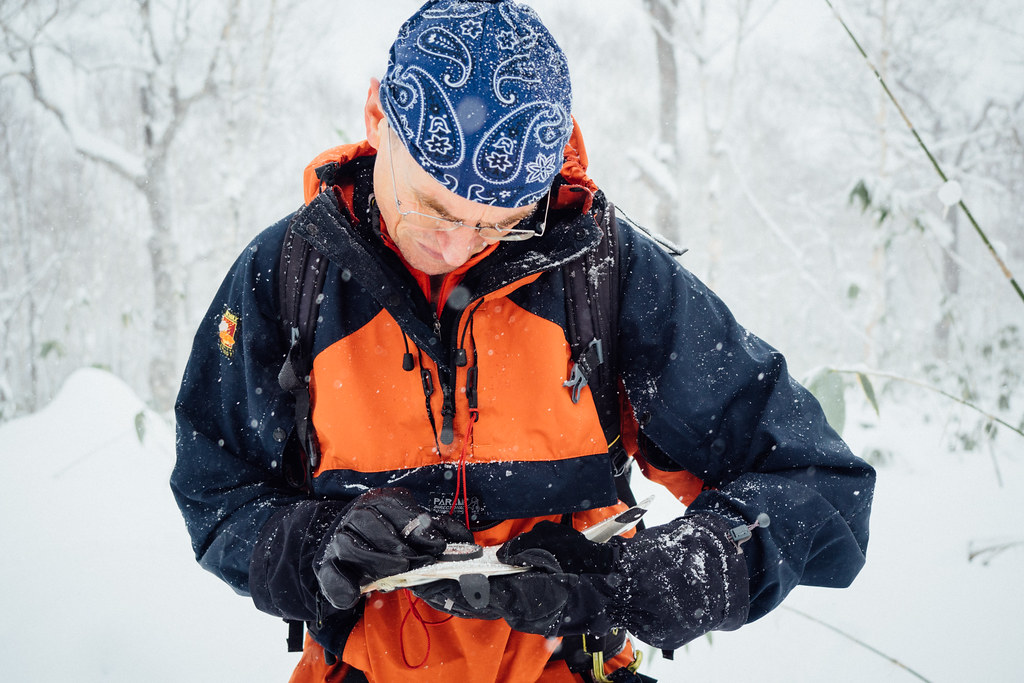 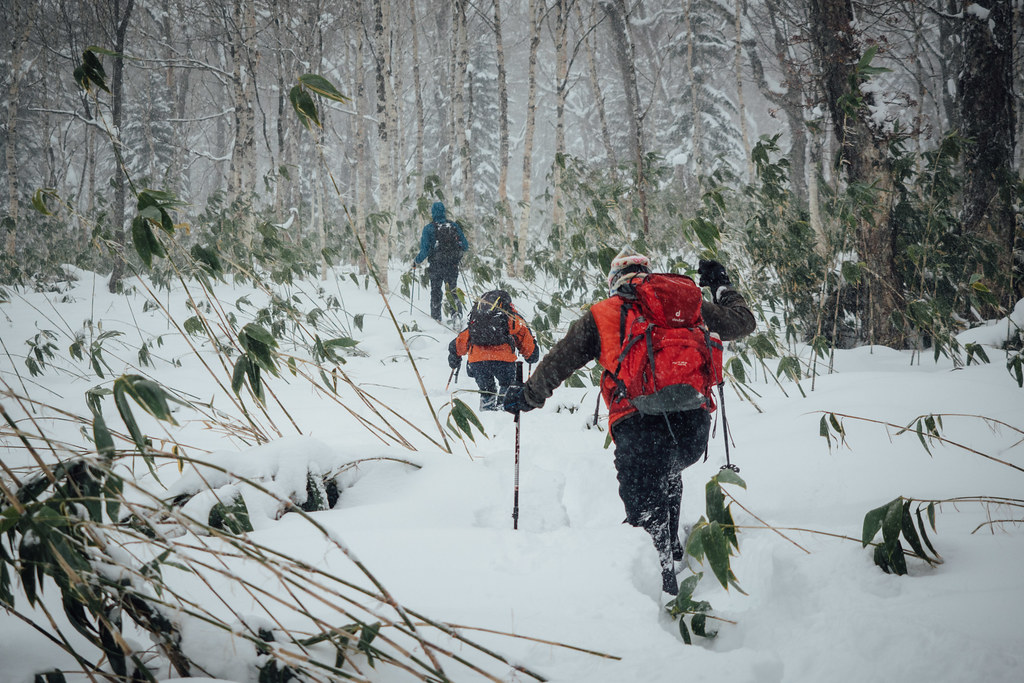 we finally found a trailmarker and the going became easier on the sasa clear trail. 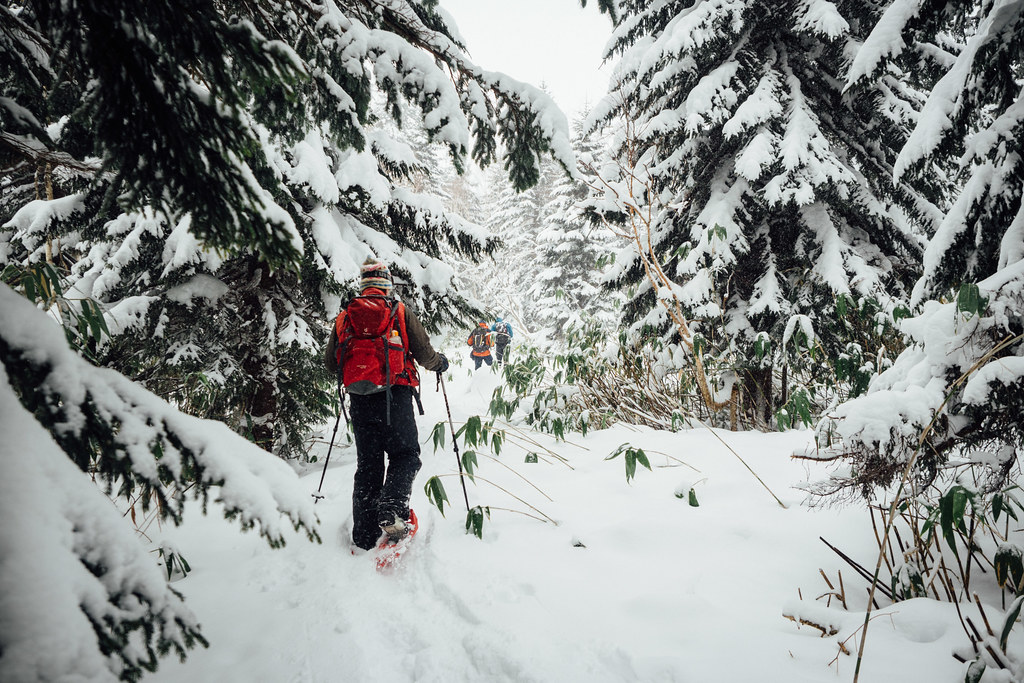 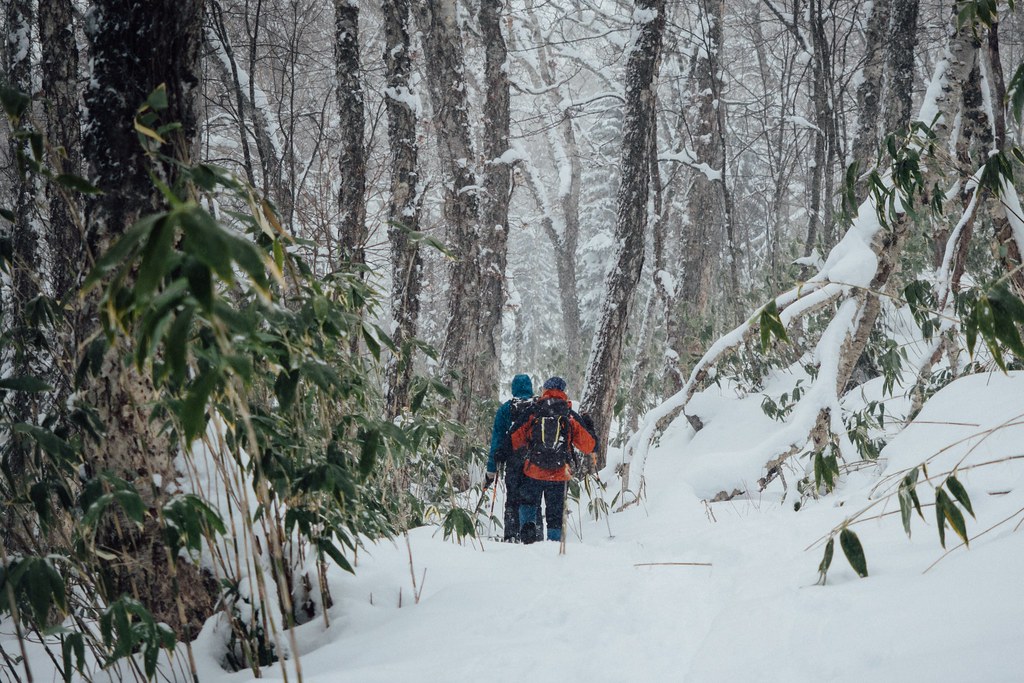 We carried on until just after noon before stopping for lunch. It had been a great morning out in the snow, with plenty of physical exertion to blow the cobwebs out from a week of desk work. Progress, however, had been slow. “We’re about a third of the way from the radio towers to the top of Kimobetsu-dake,” Rick explained. “We started at 835m, we’re now at 960m, and the top is 1175m. At this rate it would be a bit of a push.”

We decided to turn back after lunch, as the days are short at this time of year. By 5pm it is usually dark, even more so on an overcast snowy day.

The going on the way back after lunch was easier. Dirk’s skis and our snowshoes had compacted a nice path to follow. I was, as Dirk had predicted, regretting not having skis. Although, I’ve not yet invested in proper touring skis yet, so the prospect of having to carry my skis on my pack on the way up was not attractive. 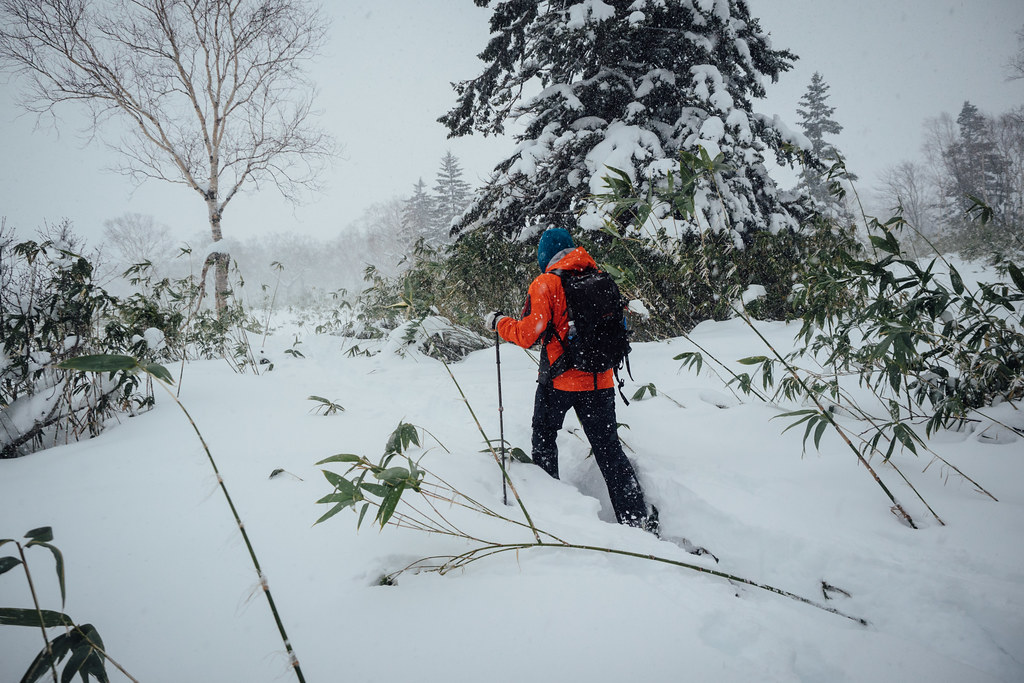 By the time we got back to the radio tower access road, Dirk was ready to remove the skins from his skis and slide the rest of the way back down to the car. 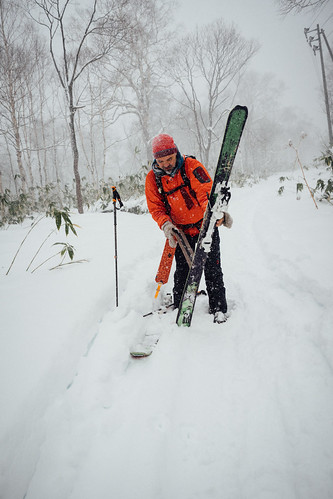 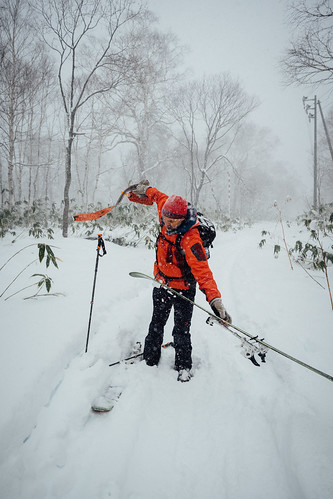 We arrived back at the car around 2pm, and already, the light was fading. 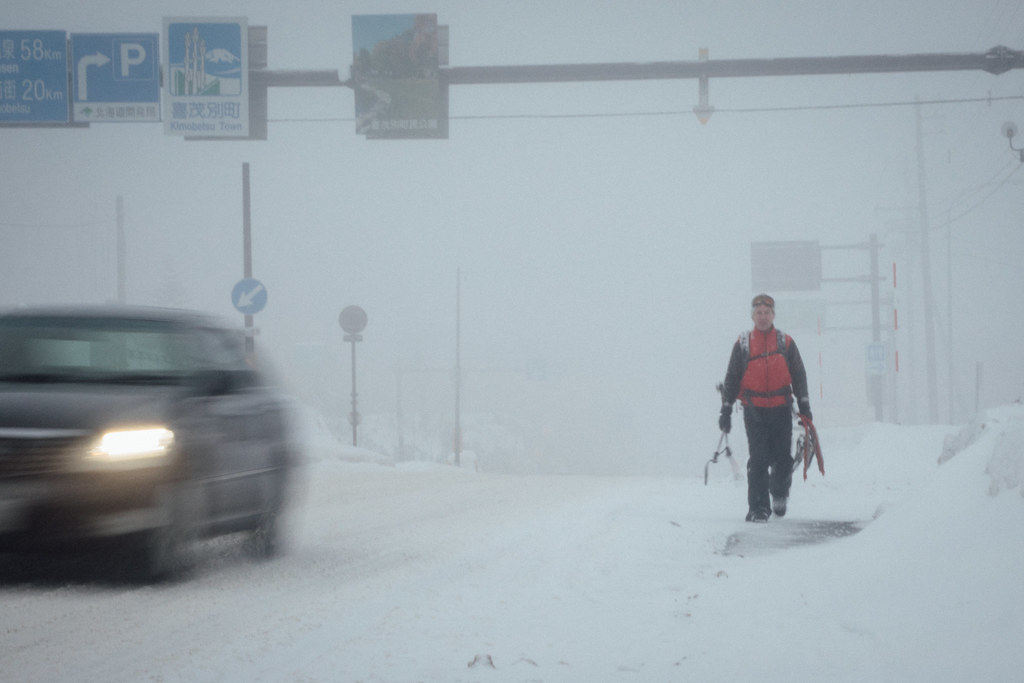 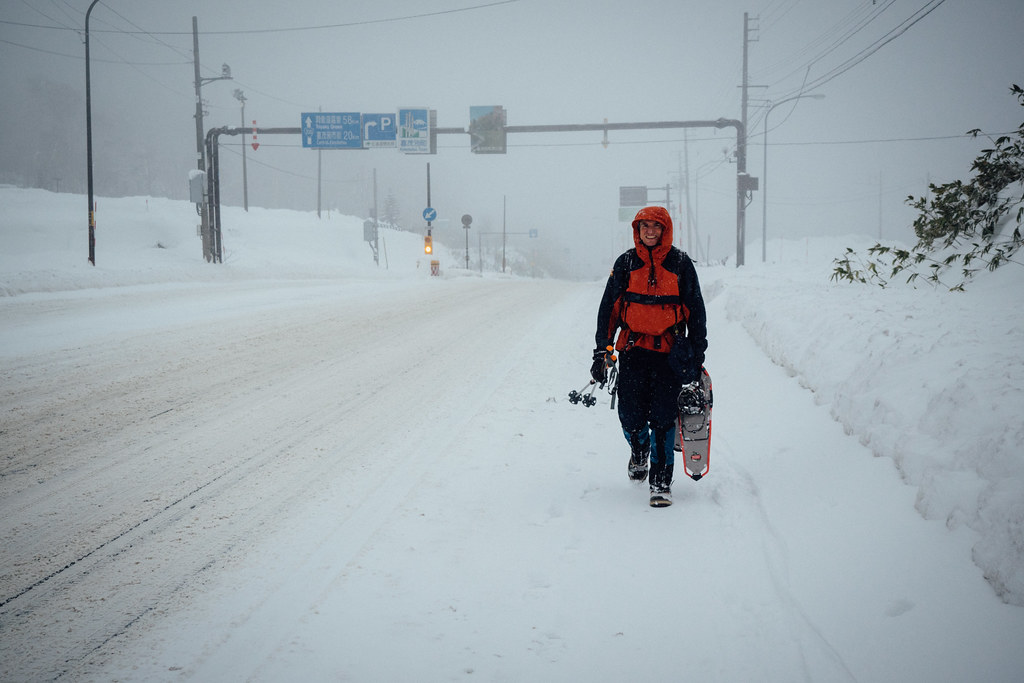 We crammed back into Jeff’s car and headed back down the hill, first stopping at Matsu-no-yu onsen, and then on to “the best ramen place on the Nakayama Pass end of Sapporo” according to Rick and Jeff. With free hard-boiled eggs, and amazing ramen, I would also give the place a 9 out of 10. A little extra legroom at the tables would give it a 10 out of 10.

As always, it was a great day out in the Hokkaido hills. 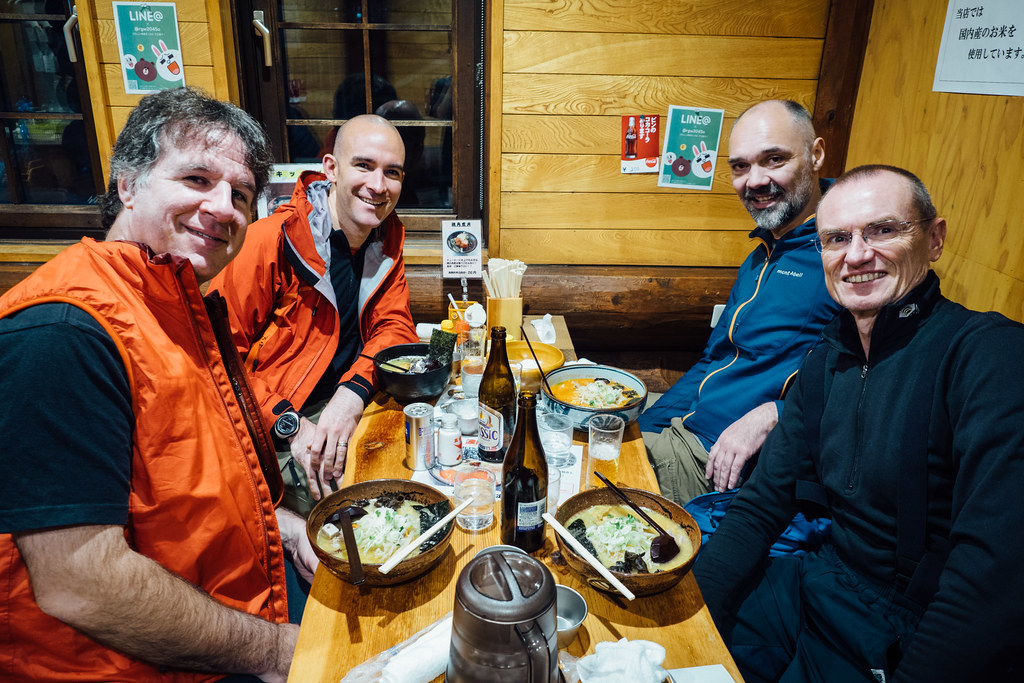