The weather of the lower Teshio River is a temperamental mistress. Few are the days where she allows the open-deck canoeist passage to the Japan Sea. Usually, she sends headwinds, gouging away at the paddler’s will in broad strokes. At times, she whips up waves on par with the open ocean, stopping the river traveler in her tracks. Today, however, the weather was benevolent – no wind, with a mirror smooth river resembling more a lake than moving water. On the last 7km in fact, we had a tailwind to push us on to the river mouth. As if the cherry on the top, Rishiri Island sat visible off the coast, welcoming us home.

“Let’s go for a drive to a local mountain,” he messaged me.

Along with Haidee, we then proceeded to drive deep into the Nakagawa hills in his 4WD Volvo station wagon.

“We sometimes shuttle mountain-bike tour guests up this gravel road, so they can do a fun downhill run,” he explained as we climbed an impossibly steep and rough forestry road, often only just wide enough for his car.

Hioki-san pointed out some slopes on the surrounding hills.

“That’s a pretty good one in the winter,” he gestured.

“From Nakagawa Town it’s a long walk though,” he admitted.

Indeed, there were some fine looking slopes with well-spaced trees around, but to get to them from Nakagawa Town you’d have about 6km of flat-land walking before you could even get near them. Nakatonbetsu Town, the town on the eastern side of the hills, would have better access.

One thing’s for sure though: the downhill on a mountain bike would be epic.

After two interesting days off the river in Nakagawa Town, it was time to get back on the water. The plan was to split the remaining distance to the coast into two days, camping at the Teshio-ohashi Bridge. As we set off, this was still the tentative plan.

We set off from Nakagawa shrouded in a dense mist. This put us on edge a little, as the official river map marked a 2km section of river with “watch out for submerged logs”.

The river was still flowing at a decent pace at this point in the day.

At one point paddling through the murk, we came across a small tributary flowing into the Teshio.

We paddled up quietly and watched as a large school of trout jostled for prime position to swim up the small channel. Autumn must be just around the corner.

We’d left the canoe port early. We were away at 5:30am. This was mainly to try to get a decent amount of paddling in before the heat of the day kicked in.

Soon enough, the sun burned off the mist, and the sky started to clear. Along the riverbanks were deer and white-tailed eagles.

About mid-morning, the river stopped flowing.

Or at least that’s what it felt like. If we stopped paddling, we’d still be traveling downstream, but at a much slower pace than before. With absolutely no wind during the morning, the surface of the river was like a mirror.

We paddled past the spot our friend Greg has mentioned was a fantastic wild camp at a bend in the river. “Next time,” I thought. It did look like a great spot to set up a tent and a campfire.

By the time we’d made it to Teshio-ohashi Bridge, it was just after noon, and we were, essentially, paddling on a lake.

And it was hot. An almost stifling heat bore down on us. I was periodically scooping up water from the mercury-like river in my hat, and dumping it over my head to keep cool. The river was opaque, but it didn’t feel overly dirty.

We discussed our options for the remainder of the distance to the end of the route. The canoe port at Teshio-ohashi Bridge wasn’t looking overly appealing, and neither did a clear spot at a new bridge going in just a little further upstream.

I checked the weather forecast, and this was what sealed the deal – the settled weather we were experiencing today was not to last. While we had northerlies forecast for the afternoon at the coast, these would change to southwesters tomorrow. Northerlies would give us a tailwind this afternoon. Southwesters would give us a perfect headwind tomorrow.

“Why don’t we just paddle the rest of the way today?” offered Haidee.

This made sense. Previously, we’d paddled 18km on Lake Shikotsu with plenty of energy to spare, so what’s another 18km-ish, with a tailwind no less.

If we thought we’d seen the flattest of the water so far today, we were wrong. By now, there was an incoming tide on the coast, further slowing the flow of the last 10km or so of the river.

Keeping us going were teasing tidbits of views of Rishiri Island. Rishiri Island is essentially one gargantuan volcano floating off the coast. We’ve previously cycled around it, and I’ve also skied it.

There was still plenty of birdlife too, to keep us company as we switched off and kept the pressure on the paddles, mostly in contemplative silence.

At 2pm, as we just started to turn the bend to start paddline southwards to the rivermouth, Haidee logged into ZOOM to participate in the last afternoon of the online conference she was part of.

“I’ll just be listening in to the talks,” she explained as she put in her bluetooth earphones and hooked them up to her smartphone.

I was slightly envious of her having a distraction from the endless paddling.

At one point, we passed the confluence with the Sarobetsu River, flowing out of the expansive Sarobetsu Wetlands.

Some day we’ll come back to explore.

Today, we were driven. Pushed on by the tailwind.

As we paddled, we felt we were slowly re-entering the realm of humans.

Considering the proximity of the river for the last 175km to humans, this might seem strange. But the reality is that on the river, there’s a feeling of detachment from humanity. This is one of the great things about Hokkaido – accessible adventure. No need to travel vast distances to get to the outdoors. This means that you’re never in real wilderness in Hokkaido. At any point along the Teshio River, we were never more than a few minutes walk or scramble from a road (be it a stopbank road or main paved road). But as long as you’re on the river, you feel as though you’re as far away as one can be from the drudgery of human civilization.

Now on the coast, we could see wind turbines. And fisherpersons clearing driftwood from their nets.

Before we arrived at the canoe port at Teshio Town, we pulled up on the large sand bar separating the Japan Sea from the Teshio River. Just over the sand bar was a crystal clear sea, and beach for as far as the eye could see.

Our arrival into the small sheltered boat ramp in Teshio Town was anticlimactic. We’d just paddled the longest uninterrupted river journey in Japan.

Now comes the pack up and return home to ‘reality’.

First up, however, was a celebratory onsen hot spring soak in the nearby Teshio Onsen. Curiously, the hot spring water was extremely salty – almost saltier than sea water. There was a fantastic view from the second floor open-air baths across the ocean to Rishiri Island.

We debated taking the easy option of staying in the attached hotel that night, but with such good views of Rishiri from the campground, we ended up opting for the autocampground. This slightly more posh campground option next to the onsen allowed us to lazily drive our car up next to our camp area with as little effort required as possible to set up camp.

Ironically, there wasn’t the view from our camp spot of Rishiri that we’d expected. But we were set up, the weather was good, and we’d completed the Teshio River Journey.

The significance of actually having the opportunity to paddle all the way to the end of the river was not lost on us. Multiple river guidebooks mention that the wind can be horrific down this far. With the river as wide as it is, waves can whip up as if it were a lake. We really did have a perfect weather window that just happened to coincide with our trip. Yes, we had to make the decision to paddle 11 hours on this last day, but we couldn’t have asked for better conditions for it.

We’d planned on taking up to seven days to complete the trip. Now, with two or three days extra up our sleeves, we would now take our time getting back to Sapporo. 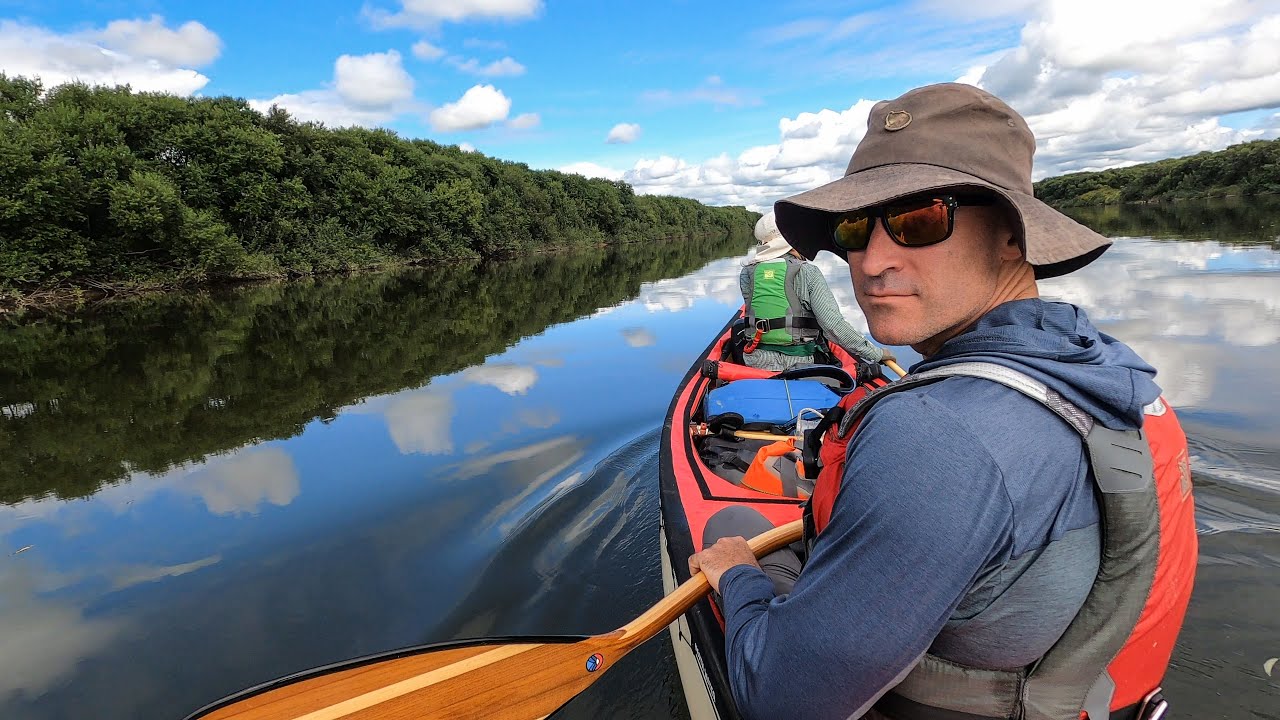