Cycling in late April in Aomori – just late enough in the season to get a sense of how much snow falls in this region in winter, not too early for it to be overwhelming. Today was a 60km jaunt from Lake Towada, up and over to the dainty town of Kuroishi, and on towards the urban sprawl of Aomori City.

We awoke this morning bleary-eyed. I felt like I had a hangover, and Haidee’s puffy eyes looked similar. Yesterday was one serious way to blow the cobwebs out of our 9-5-work-day bodies.

Cycling in late April in Aomori – just late enough in the season to get a sense of how much snow falls in this region in winter, not too early for it to be overwhelming. Today was a 60km jaunt from Lake Towada, up and over to the dainty town of Kuroishi, and on towards the urban sprawl of Aomori City.

We awoke this morning bleary-eyed. I felt like I had a hangover, and Haidee’s puffy eyes looked similar. Yesterday was one serious way to blow the cobwebs out of our 9-5-work-day bodies.

Popping our heads out of our tent, however, made us realise that perhaps all that hard work was worth it. The wind from the previous day had gone, leaving us with the peaceful chatter of birds. Despite the lack of hot-springs nearby, this Oide Campground is a great spot. 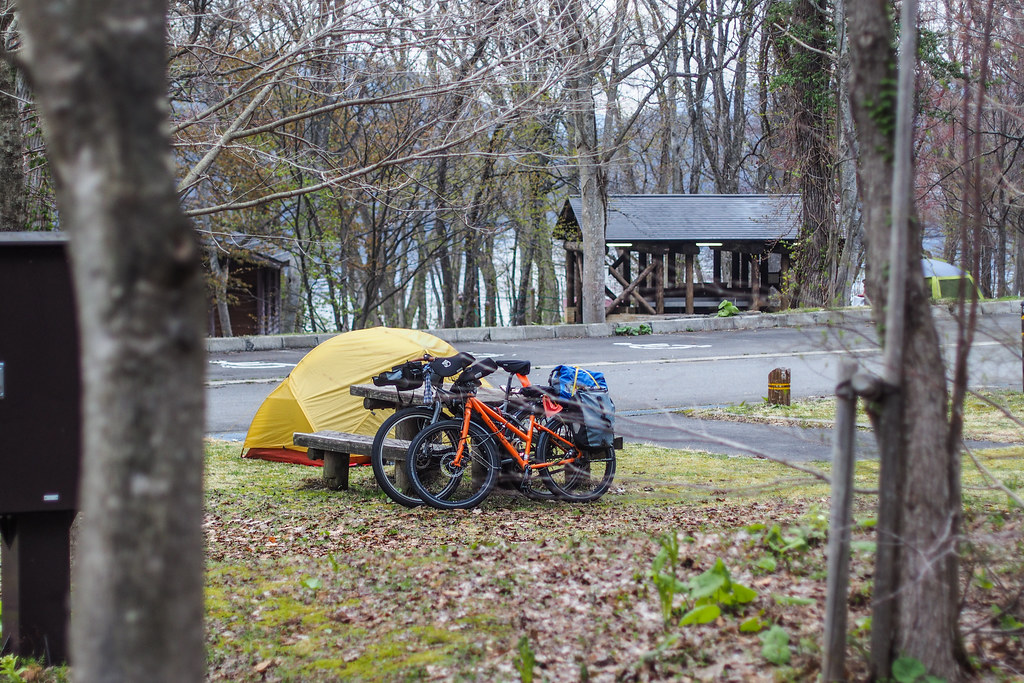 We soon had our usual explosion of kitchen gear, and got our morning brew of porridge on the go. We always try to bring at least a week’s worth of oats with us on our cycle trips. Raw rolled oats are difficult to find in Japan at the best of times (we order them in 5kg boxes online), and in the more rural areas the only option for a cereal-based breakfast is sugar-laden cereal.

This morning, we were particularly enjoying our Crazy Creek campchairs. This is the first trip we’ve used them on, and they definitely make camping more comfortable. A big thanks to Braking Boundaries for the recommendation. These are the Crazy Creek Hex 2.0 chair. Highly recommended. 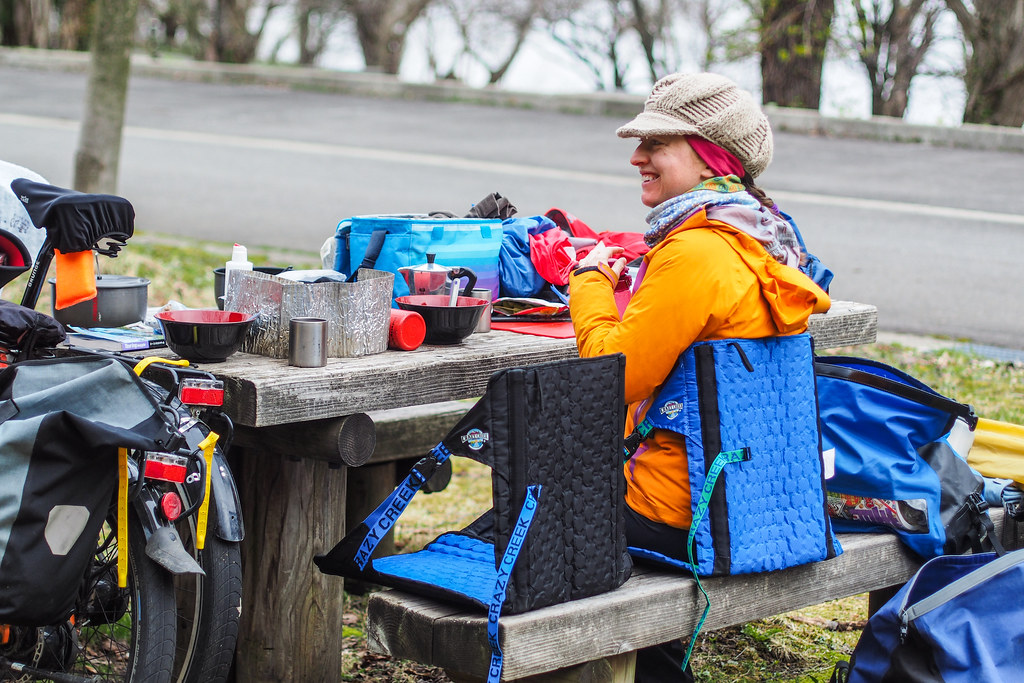 In summer, we could imagine that Lake Towada must be an amazing place to escape some of the heat of the lower reaches of Aomori. At this time of year, there was still snow lingering, even in the campground. It all had a peaceful but sombre feel to it. 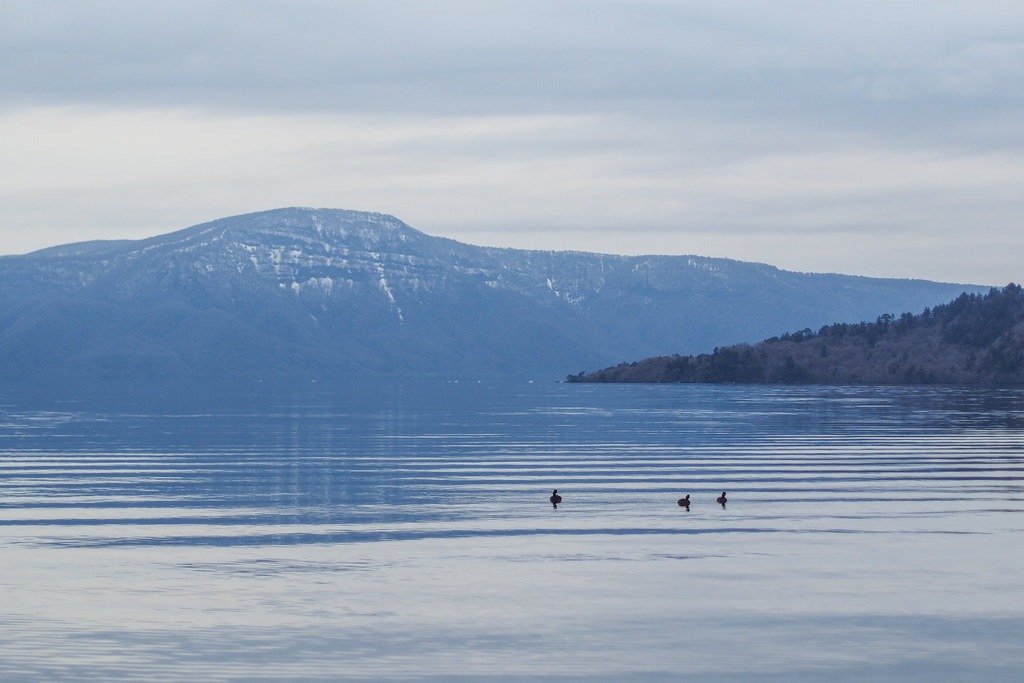 We were on the road at around 7am, and enjoyed the mellow meander around the first 5km or so around the lake. The beautiful forest was alive with birdsong. Only a few cars passed us. Thoroughly pleasant cycling. 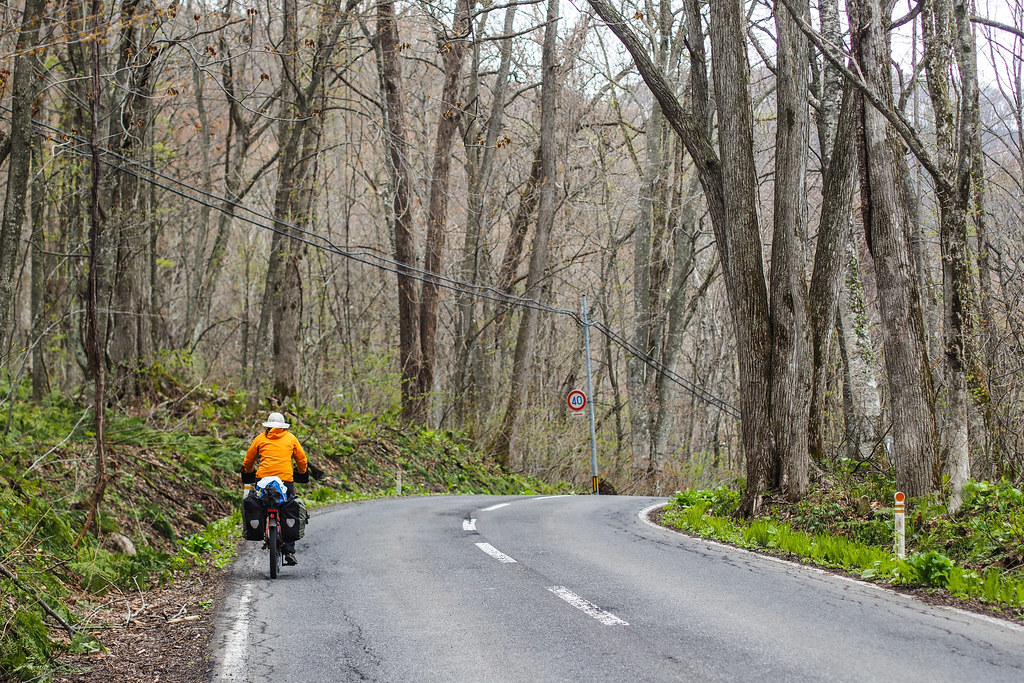 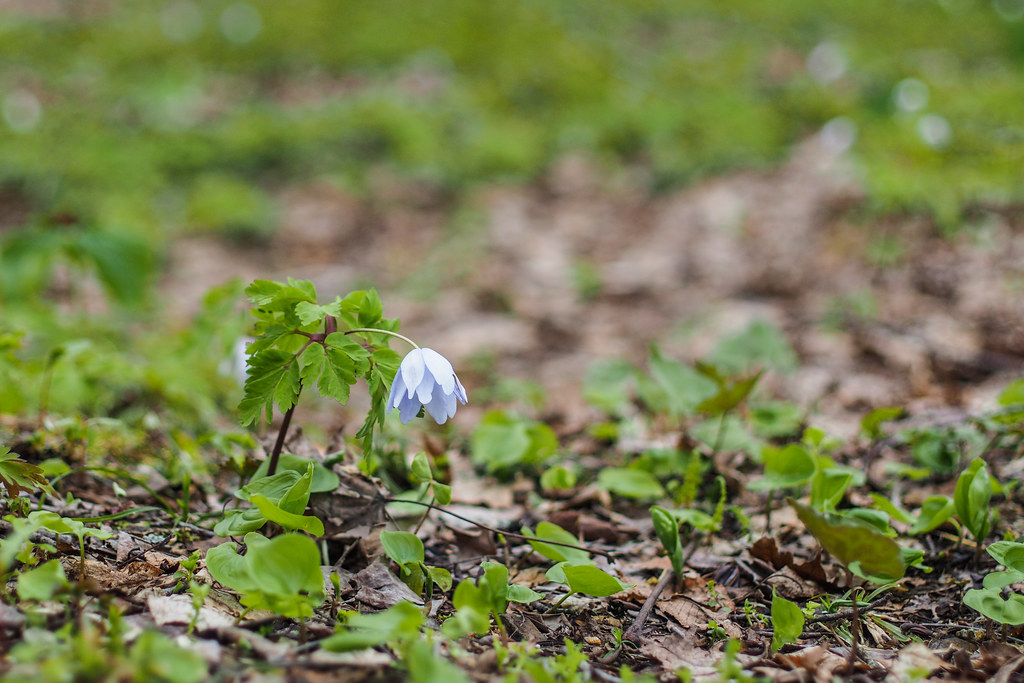 The easy pottering along was not to last, however, and we were soon grunting our way up out of the caldera in which Lake Towada sits. This was truly steep stuff, which pushed us up and over 500m in altitude, well and truly into the realm of late spring snow melt. 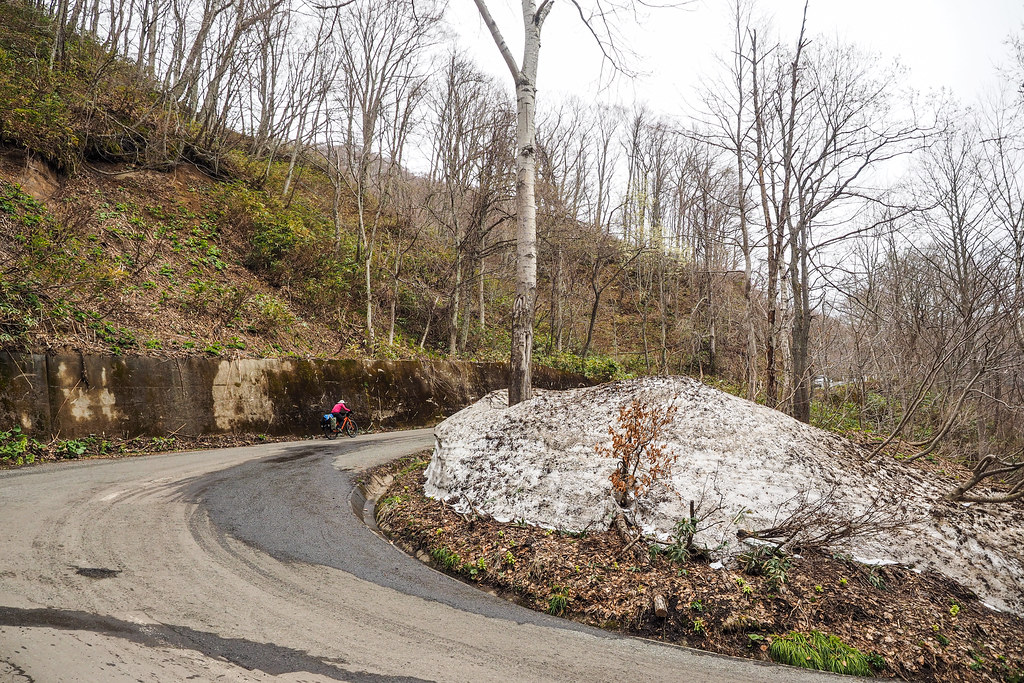 Similar to yesterday, however, the road was lined with quiet forest and waterfalls, keeping the ride interesting. 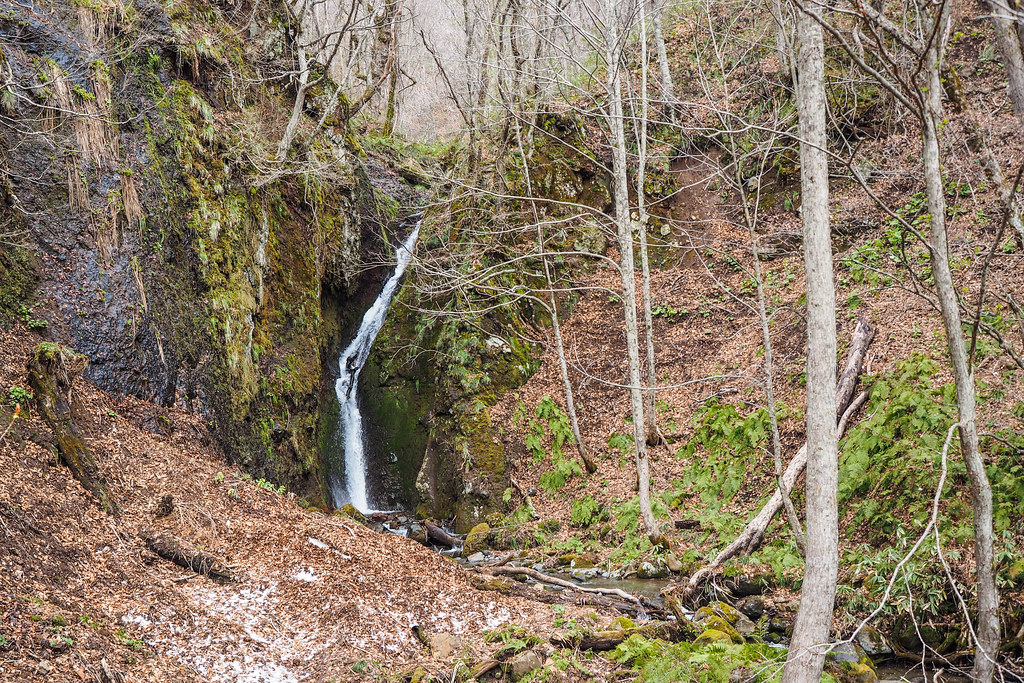 At the top of the climb, we were rewarded with big views over the lake. Winter is very much only just losing its grip here at this time of year. 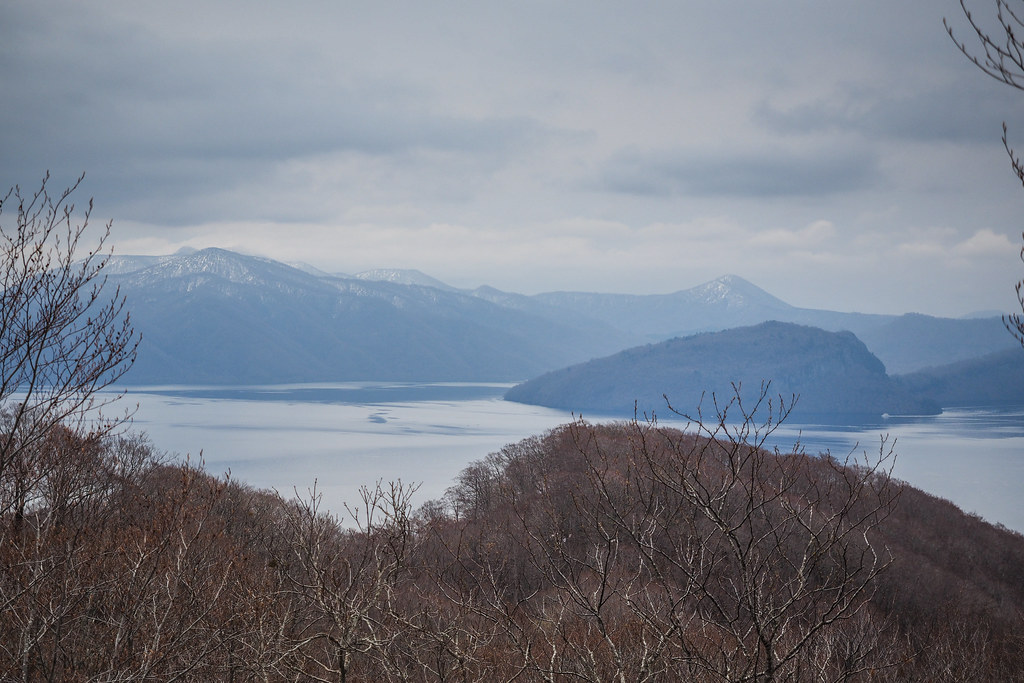 We were also rewarded with a rip-roaring descent down the other side. It was sweet relief to know that we’d be going either downhill or on the flat for the rest of the day. I really couldn’t get over how pretty the woods were in this area. 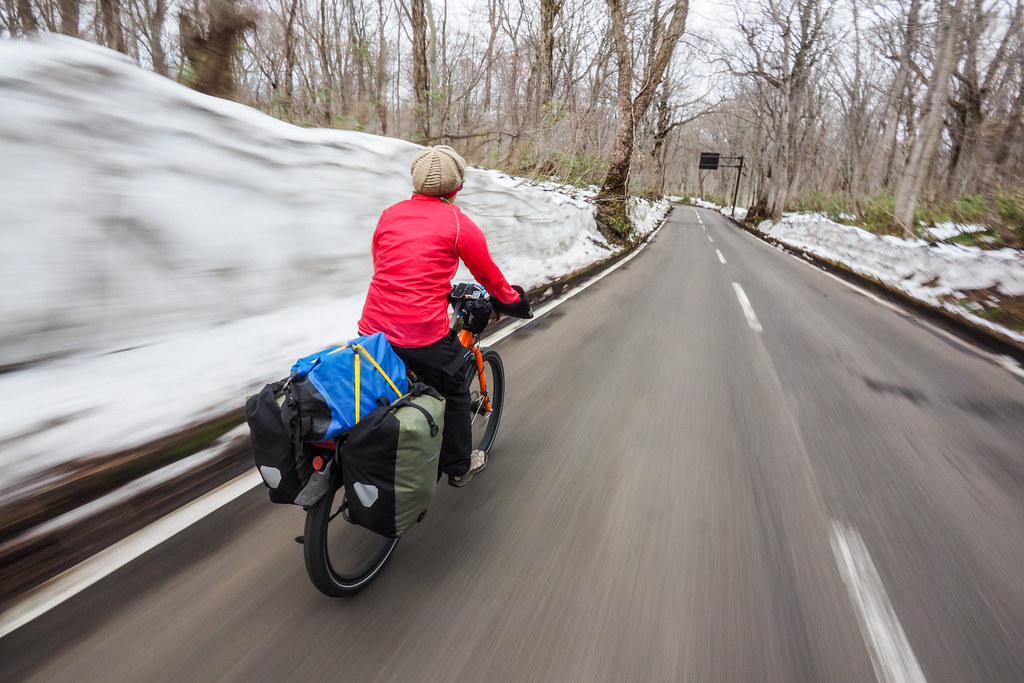 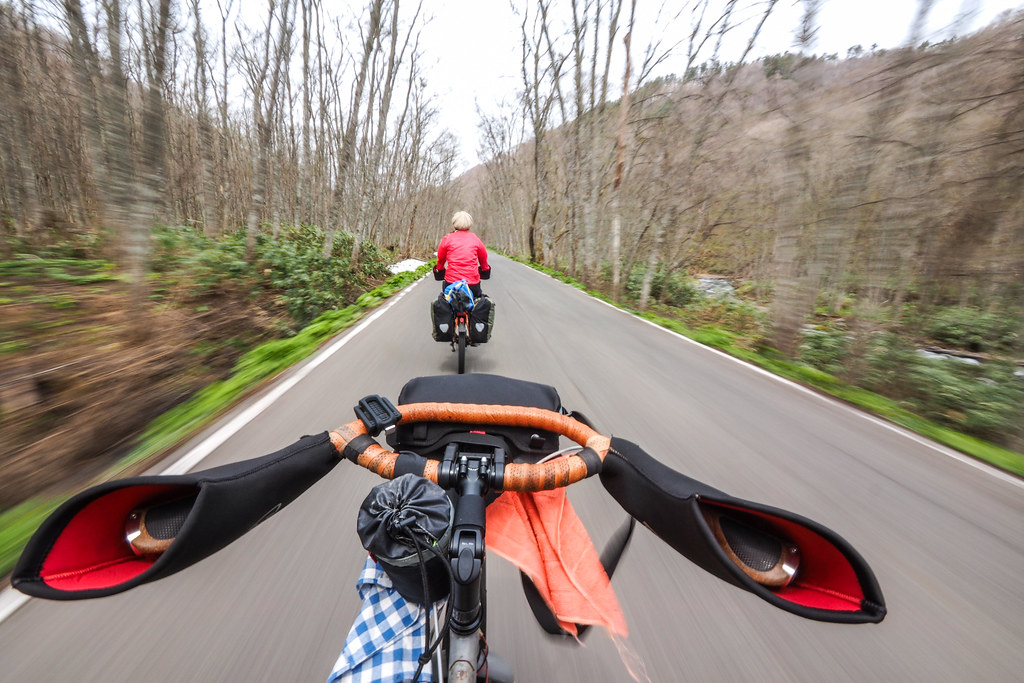 We had got our hopes up about an onsen area marked on our maps half-way to Kuroishi City. Alas they were thwarted. We only found the remnants of what used to be a couple of onsen-inns, now rotting and in disuse. A nearby farmhouse had the beginnings of a beautiful spring flower patch though. 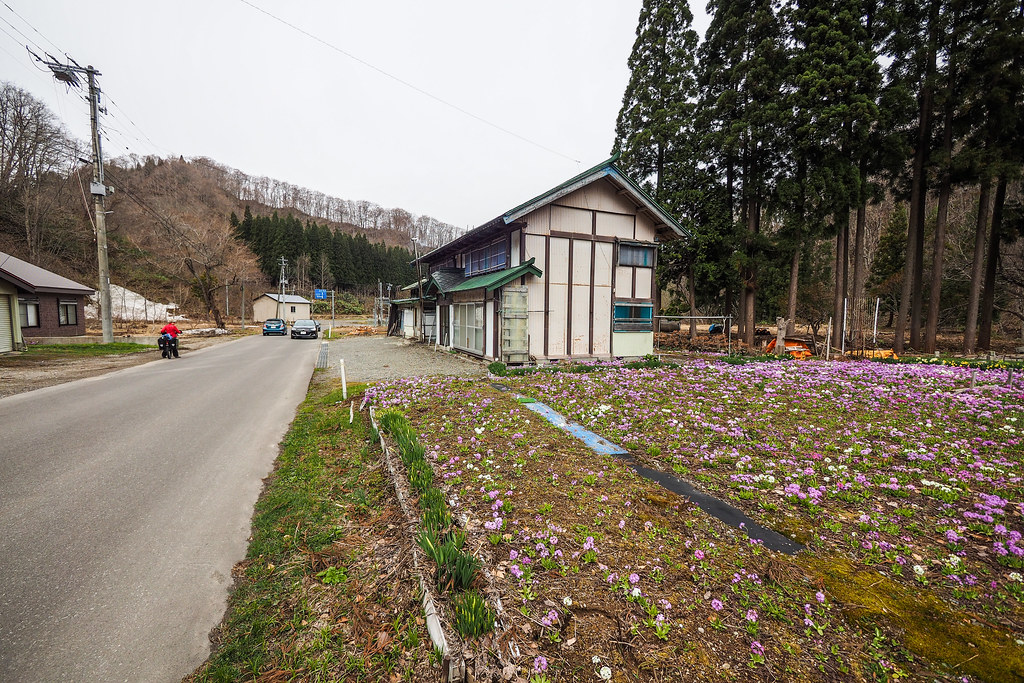 We kept the pressure on, and soon made it to Kuroishi for a break and some lunch. Apparently the town is known for its kokeshi (limbless wooden dolls), and in the traditional Japanese arcade in the middle of the town, which houses a rather extensive kokeshi museum, we availed ourselves of the foot-onsen running through the street. 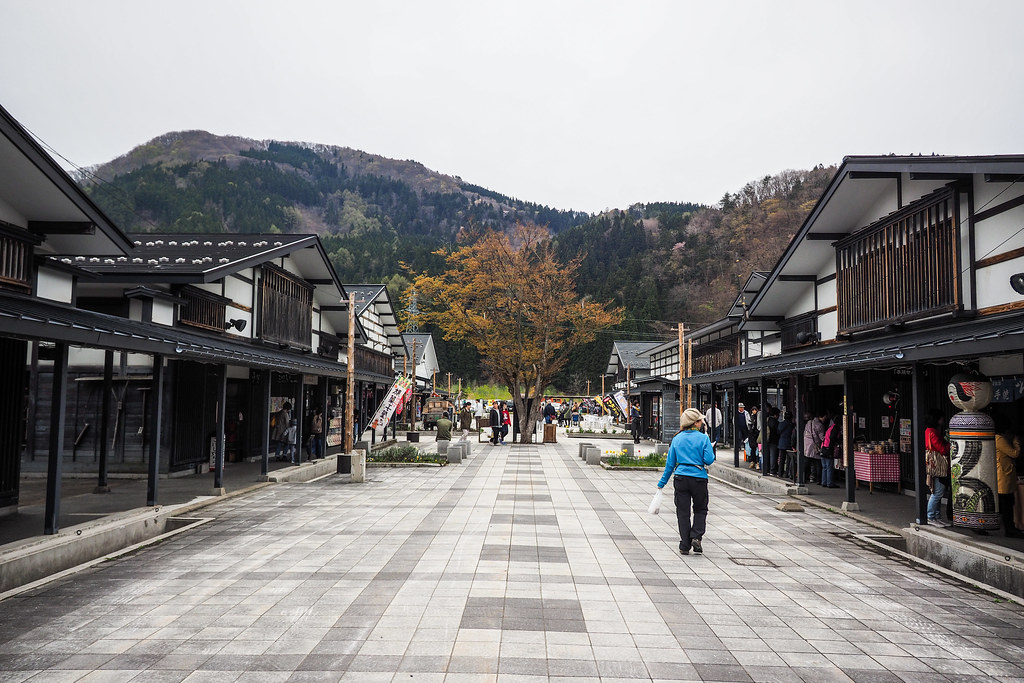 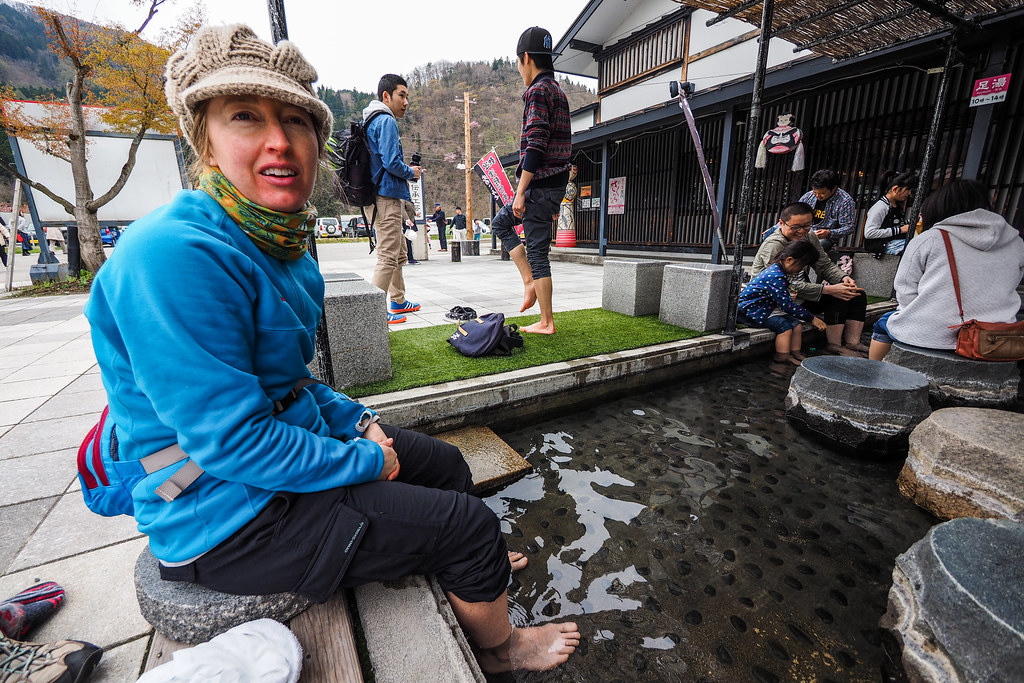 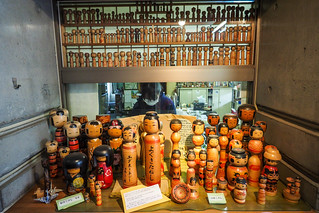 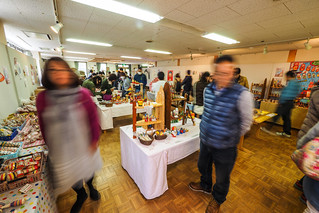 From Kuroishi it was more or less a straight shot to our destination for the day, the Prefectural Park. This would take us through a mix of busy suburban sprawl and paddy fields. We tried our best to weave our way via quiet side roads. 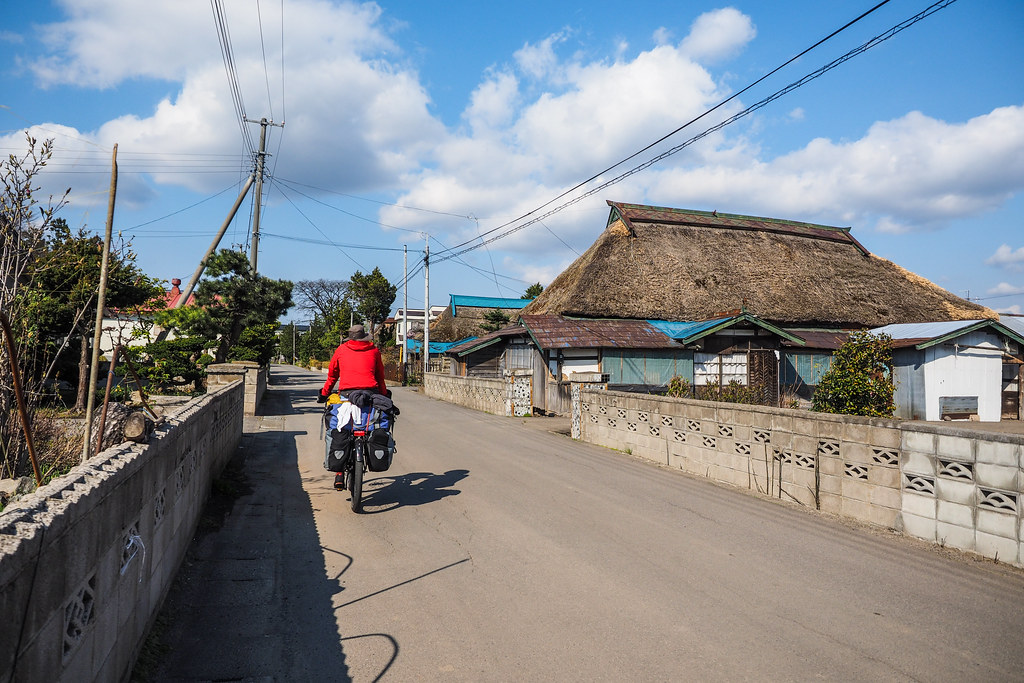 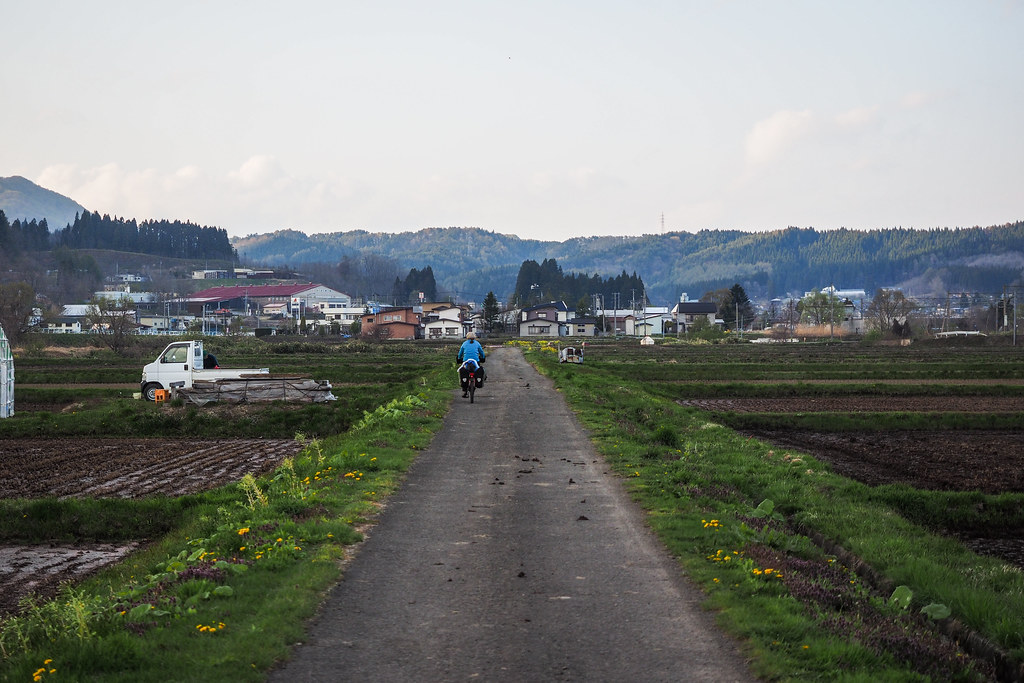 Well and truly on the agenda, however, was to drop by an onsen for a wash and a soak. Google Maps directed us to one more or less on our route, and it was suitably cheap and cheerful. Located in the suburban sprawl, it was more along the lines of a local communal bathhouse, but the hot waters were a welcome punctuation to a couple of days of riding. 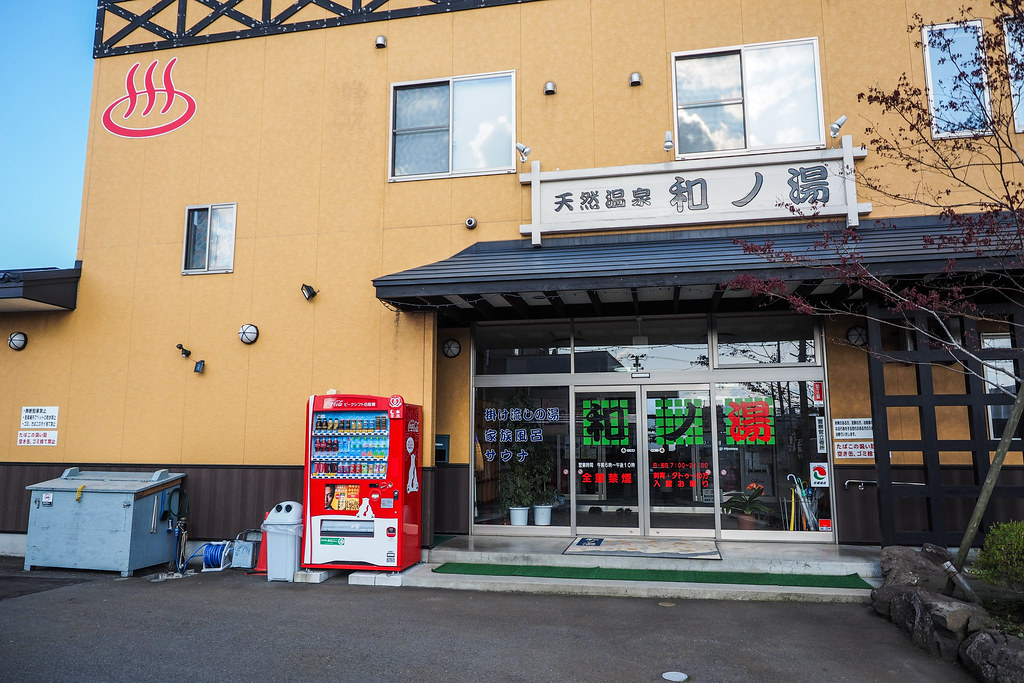 At the convenience store next door, we used their hot water pots to make ourselves a coffee, and I noticed an ad on the door seeking staff to work there. For a daytime shift, you’d get 695yen an hour. Around US$6.50 equivalent. That seems pretty measly to me… 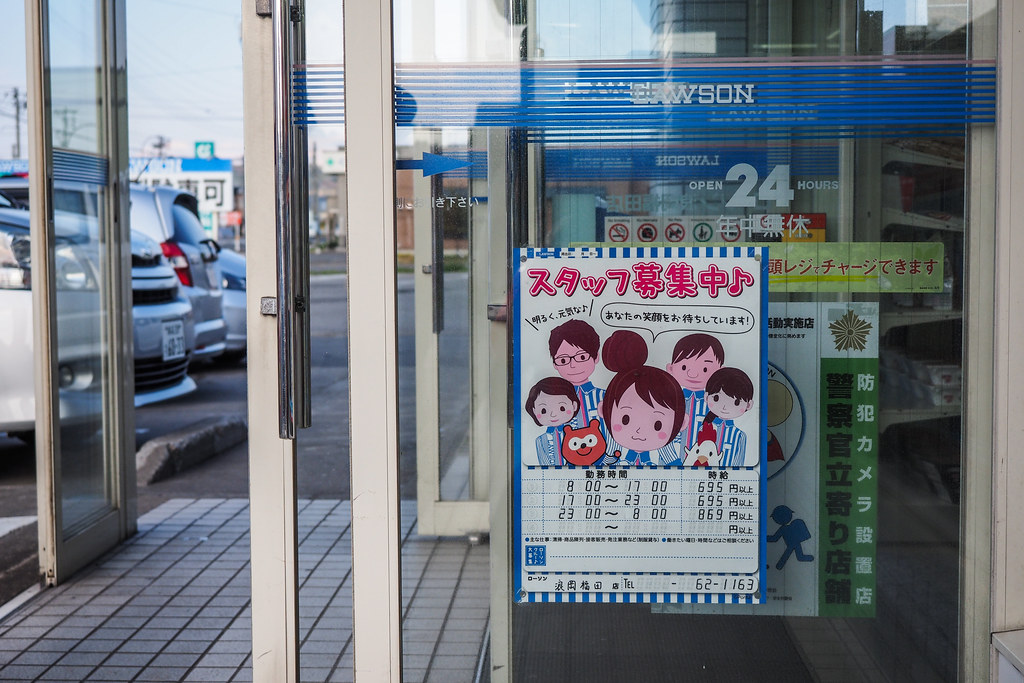 The final push up to the Prefectural Park campsite was 3km uphill. Through swarms of tiny sandfly-like insects. Mercifully they did not seem to be the biting type.

We finally made it to the campsite just after 5pm. We were signed in, and we set up camp. “How much was the campsite,” asked Haidee. It was only at that point that I realised that there had been no talk about payment for the campsite. Either the guy at the window forgot about it, or it is a free campsite, but either way no money had changed hands. 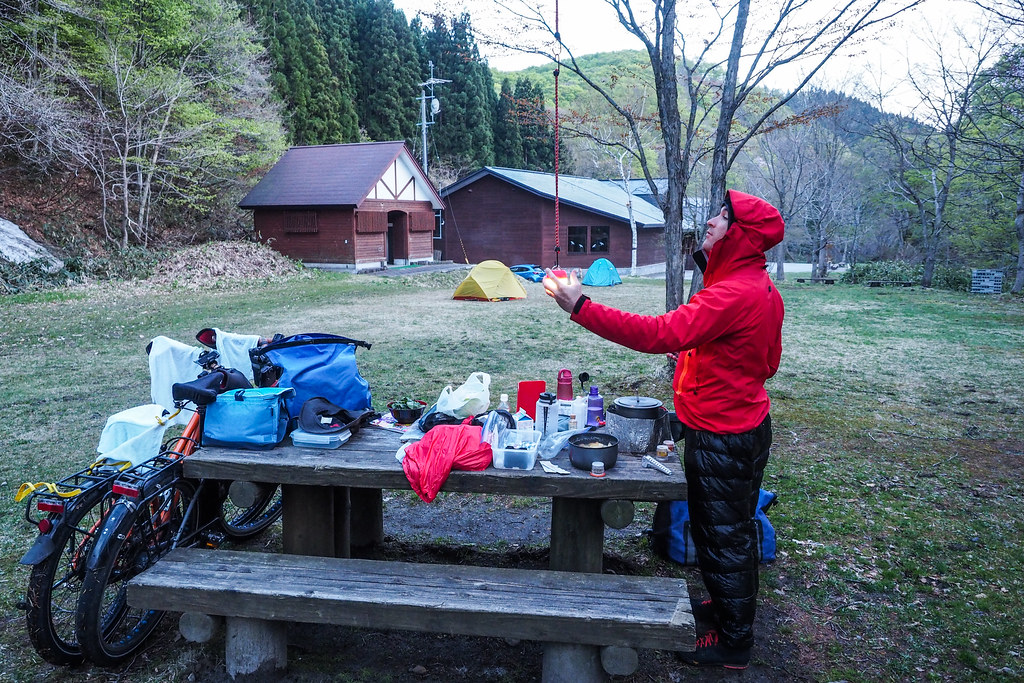 I got some dinner on the go, and before long it was dark. We were thankful for the lantern I had picked up the day before we left in Hokkaido. An impulse buy at the time, this little Black Diamond Moji lantern has proved to be worth its (lightweight) weight! 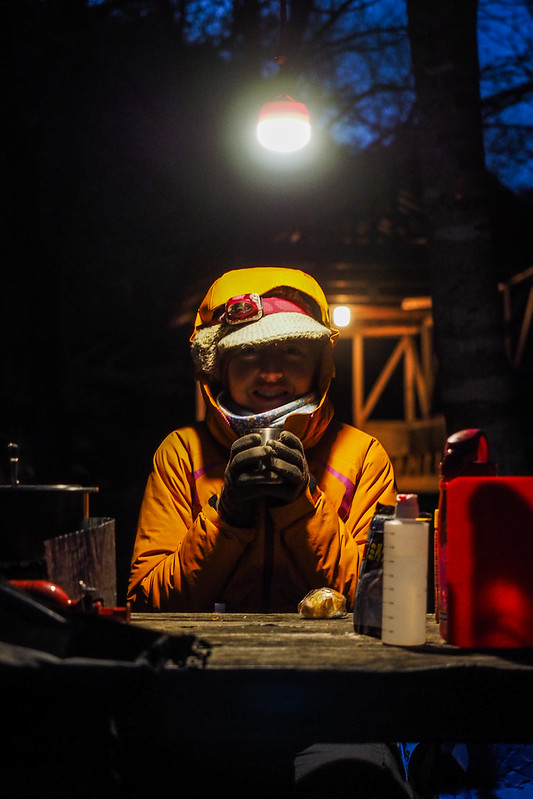 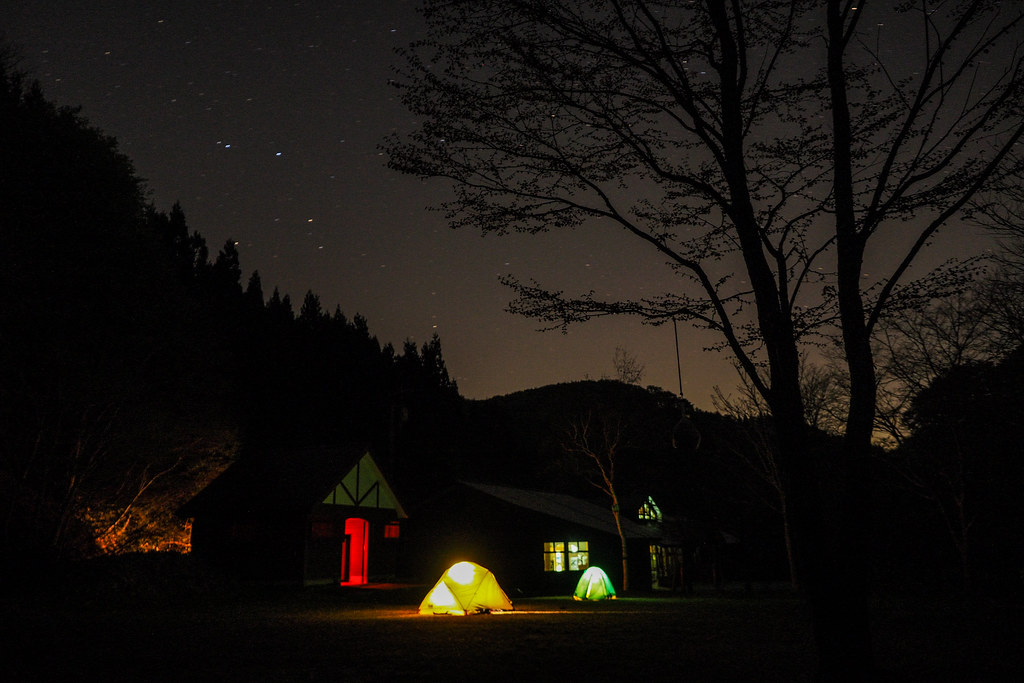