If you’re ever looking for a place to stay in Hachinohe City (the apocalyptic mess of a port-town) then I thoroughly recommend Hotel Select Inn. Just over 3,000yen each for a two-person room. The rooms are basic and the interior is dated, but the buffet breakfast is the best I’ve had at a budget hotel. Rice, curry, salad, croissants, coffee, milk, miso soup…all good honest food, and great for a cycling tourist!

A baptism by fire today…headwinds, hills, and a long day in the saddle. We were rewarded, however, by the beautiful Oirase Gorge – 10km of beautiful forest and endless waterfalls.

If you’re ever looking for a place to stay in Hachinohe City (the apocalyptic mess of a port-town) then I thoroughly recommend Hotel Select Inn. Just over 3,000yen each for a two-person room. The rooms are basic and the interior is dated, but the buffet breakfast is the best I’ve had at a budget hotel. Rice, curry, salad, croissants, coffee, milk, miso soup…all good honest food, and great for a cycling tourist!

Full of a nourishing breakfast, we were on the road by 7:30am. Immediately we were jolted into the reality of cycle touring in ‘mainland’ Japan. While Hokkaido cities are generally wide open and simple to navigate, Hachinohe felt like a rabbit warren of narrow streets and alternative routes. Google Maps zigged and zagged us out of the city, as a frigid westerly blew in our faces. 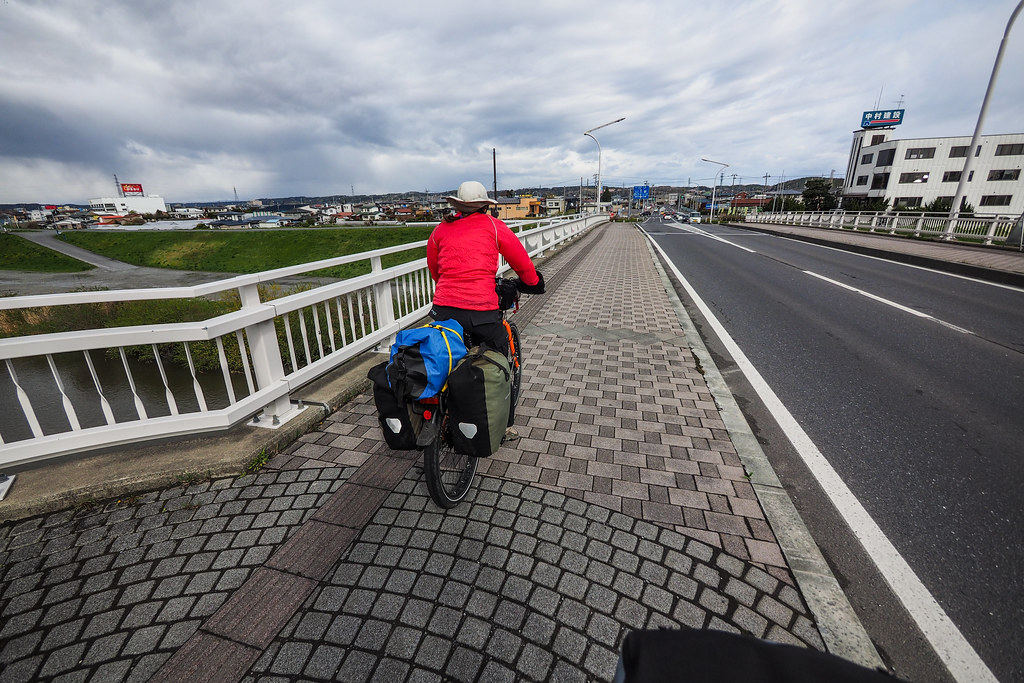 That cold westerly wind (a gale a times) would hound us for most of this 7-hour-riding time day.

At one point as we were pushing out of the city, a jovial elderly local on a scooter pulled up beside us at a set of lights. In a thick Aomori dialect he wished us luck. “It’d be nice if it doesn’t snow,” he smiled. “It sure feels like it might!”

The menacing clouds of the morning, however, gave way to blue skies after not too long. The same chilly headwind remained, and Google continued to steer us onto nice quiet roads. 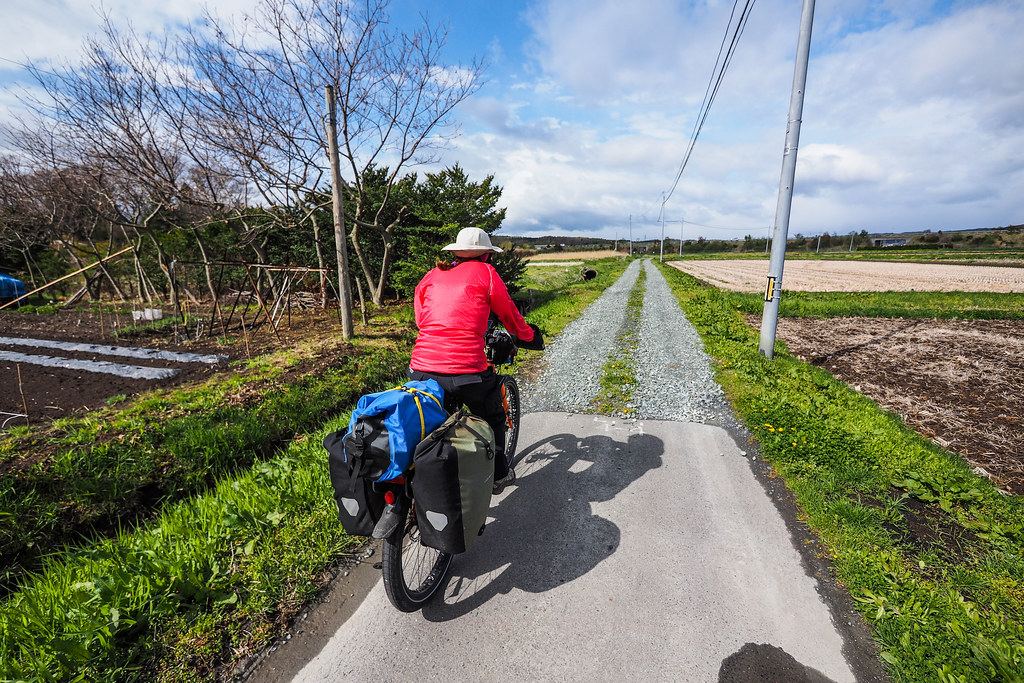 Sometimes a little too quiet for our liking. This short stretch of forestry road was gut-bustingly steep…little did we know it would be somewhat of a warmup of what lay in store for us in the days ahead. 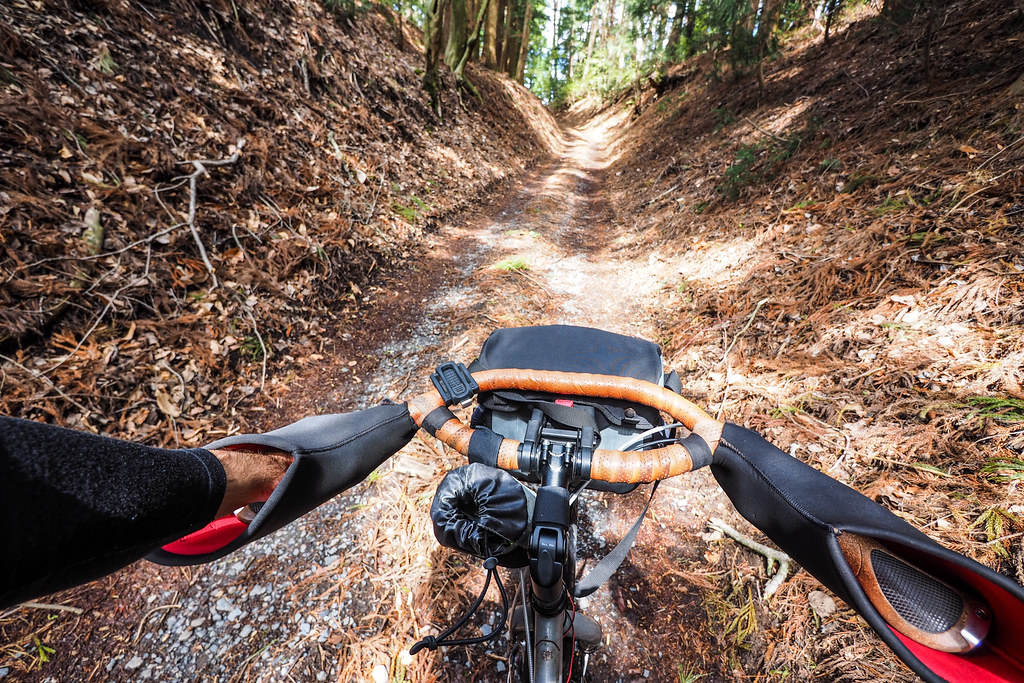 As lunchtime approached, we spied a michi-no-eki on the map – a road-side station that usually has toilets, a restaurant, and a shop selling local-produce. We rolled into the Oirase Park area, and quickly sheltered from the wind at the Oirase Brewery restaurant. As is generally custom on our cycle tours, we indulged in one of their great set-menu lunches. We generally spend less than 1,000yen each for lunches (around US$10). On my plate was a hearty crumbed pork fillet, served with a mass of salad, miso soup, pickles, and rice. 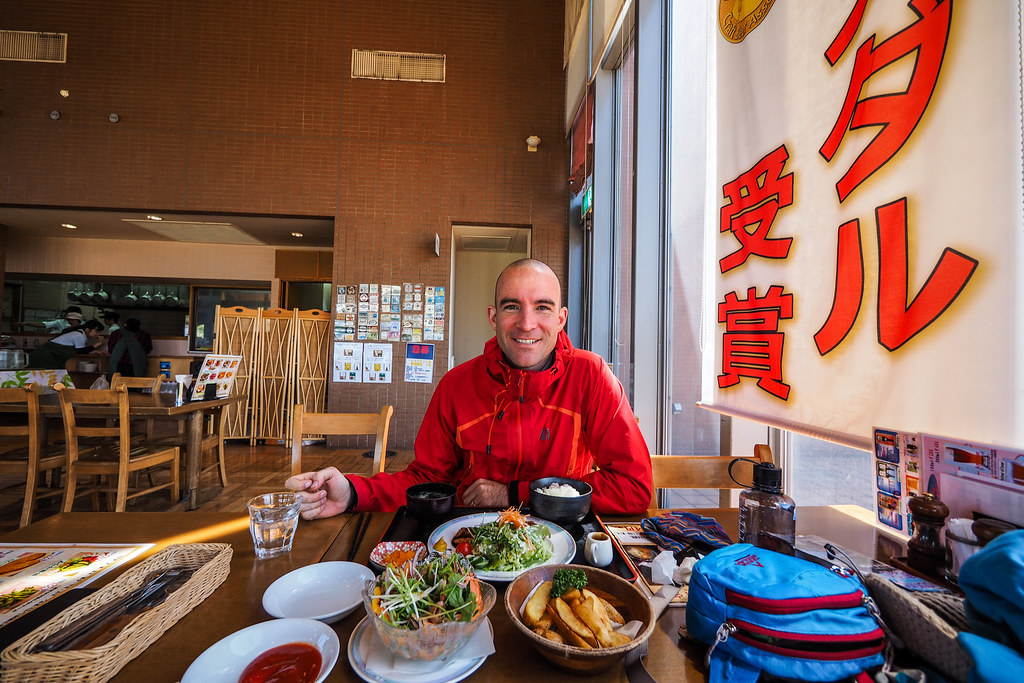 We were more than a little reluctant to head back out into the gusting westerly wind after lunch. But any more time spent in that brewery and I would have been tempted to order one of their local finest brews, so we pushed on. We still had a lot of ground to cover to get to our campground for the night on the shores of Lake Towadako. The promise of a hotel right next door to the campground with an onsen was a great motivator.

For much of the way up to the beginning of the famous Oirase Gorge, we were treated to blossoms in full bloom. 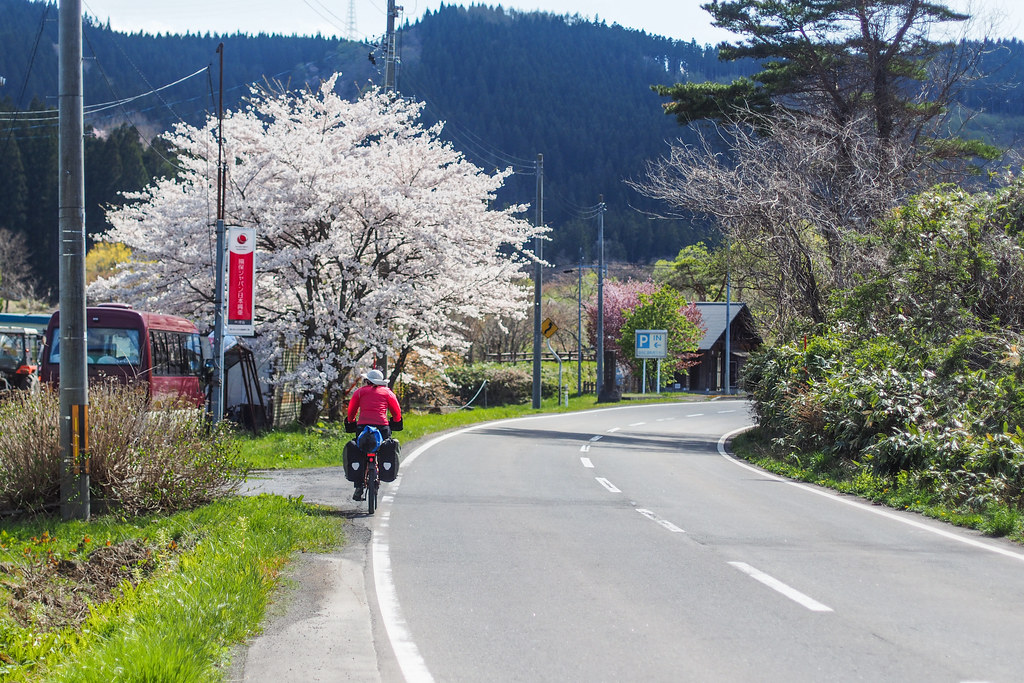 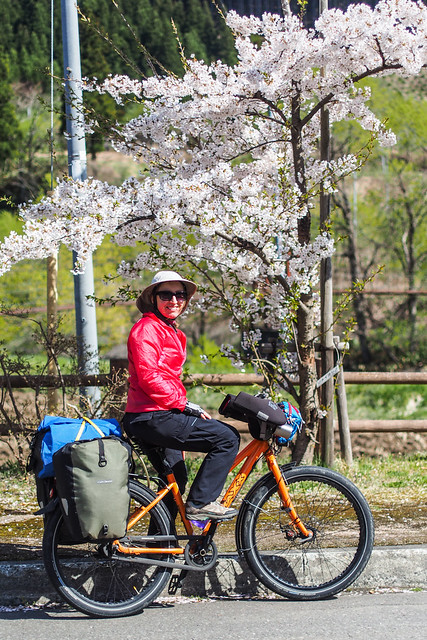 Soon, the wide valley we were traveling in narrowed down into one of Aomori’s biggest tourist traps – the Oirase Gorge. This gorge is famous for its multiple waterfalls. Surely the best way to enjoy this 10km long stretch of natural wonder is by bike… 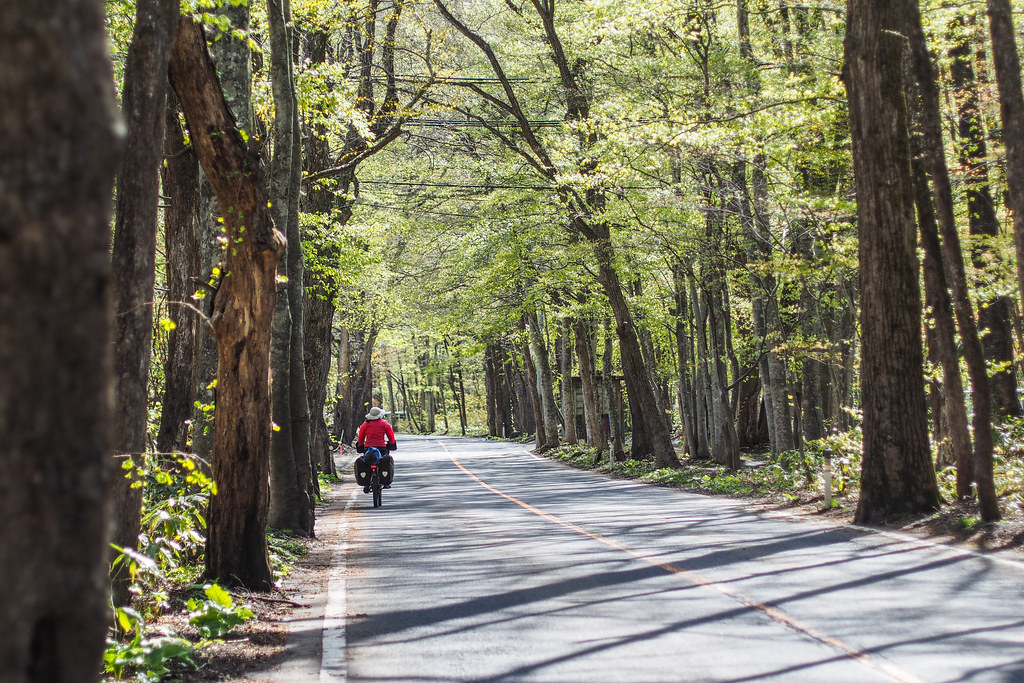 Rather than by the hectic pace of a tourist bus. 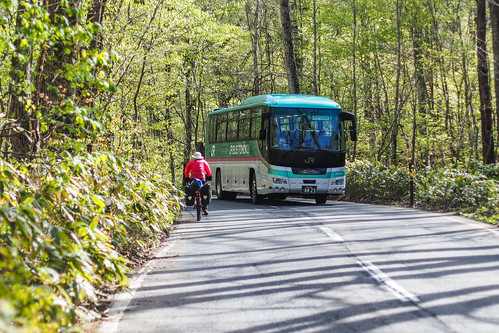 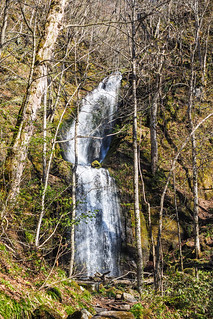 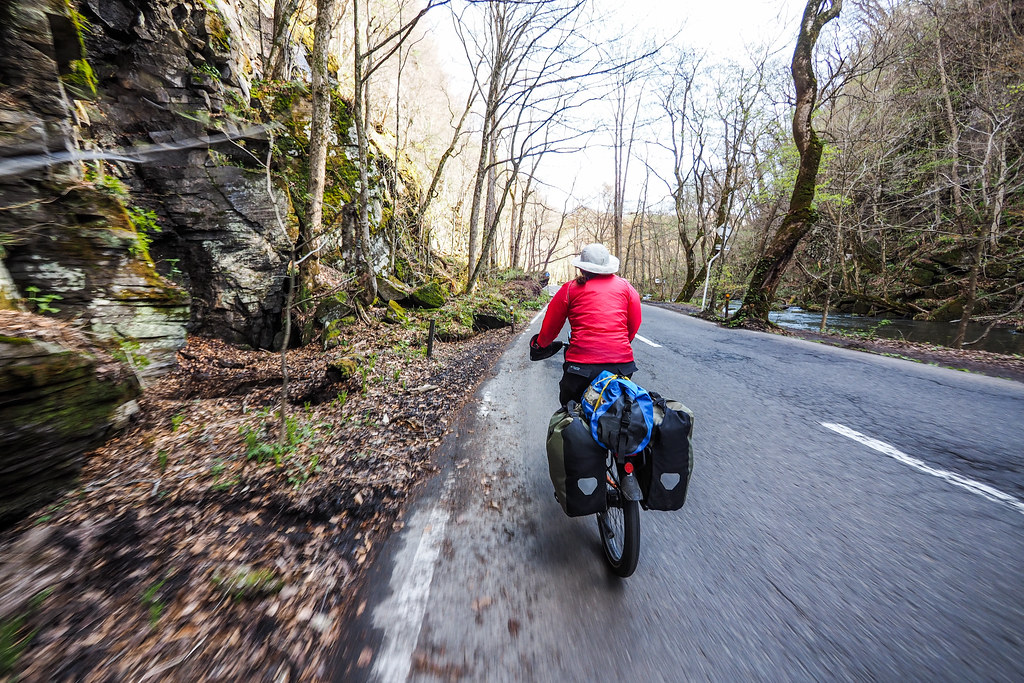 By the time we had inched our way uphill through the beautiful Oirase Gorge on our bikes, we had covered 75km when we arrived at Lake Towadako. This was our first multi-day cycle tour in at least half a year, so we were feeling the miles. Furthermore, this was the distance that we had originally expected to cover on this first day of the tour – nothing more than 70km or so. But that was according to the original plan, which took a southerly route. We had changed plans on a whim, deciding to take in a more northerly route from Hachinohe to the lake, via Oirase Gorge. Upon checking the map, however, we saw that we still had 15km to cover around the lake to get to our campsite. We would just have to keep pushing on. At this time of year, with the winter only just gone and the wind sweeping across the lake, it felt like a rather desolate place. 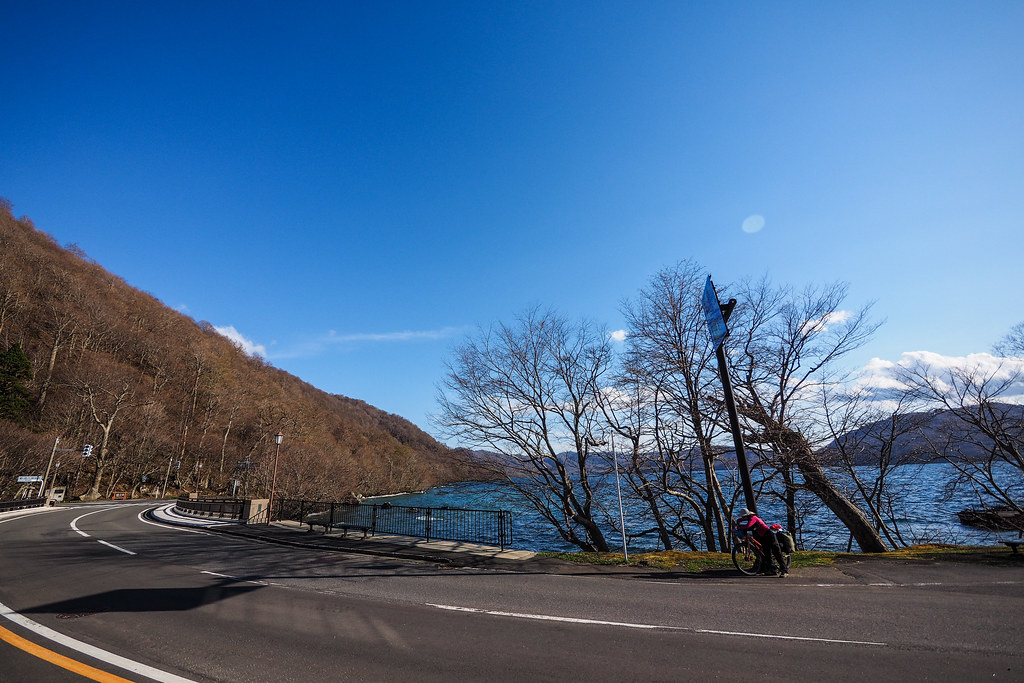 After another couple of unexpected ups and downs around the southern side of the lake, passing some very welcoming looking cafes and onsen hotels along the way (we were, after all, heading to a campsite with an adjacent hot-spring hotel), we rolled into our campsite. Situated on the lake-front, with excellent kitchen facilities, it was a nice campsite. The hope that had kept us going – the adjacent hotel with its hotspring – however, was to our dismay no longer in business. The campground showers were out of use also. C’est la vie is all we could say as we hurried to get the tent up before dark, and get some warm soup on the go.

Our first full day of cycling in Aomori certainly felt like a baptism of fire!

In hindsight, we would have liked to have taken our time a little bit more in this area. The little peninsula sticking out into the lake looks like a really nice place to spend an afternoon. 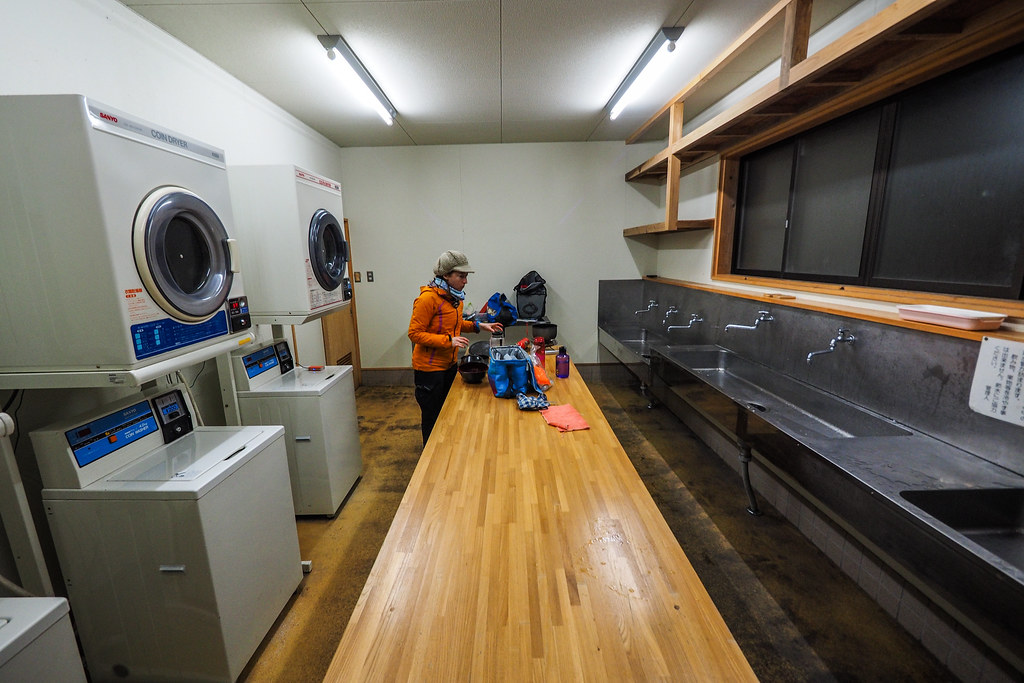