In order to catch the 10:30am ferry from Sotogahama to Mutsu today, we were up early.

The morning proceedings were interrupted somewhat however, by a bag full of fresh scallops. 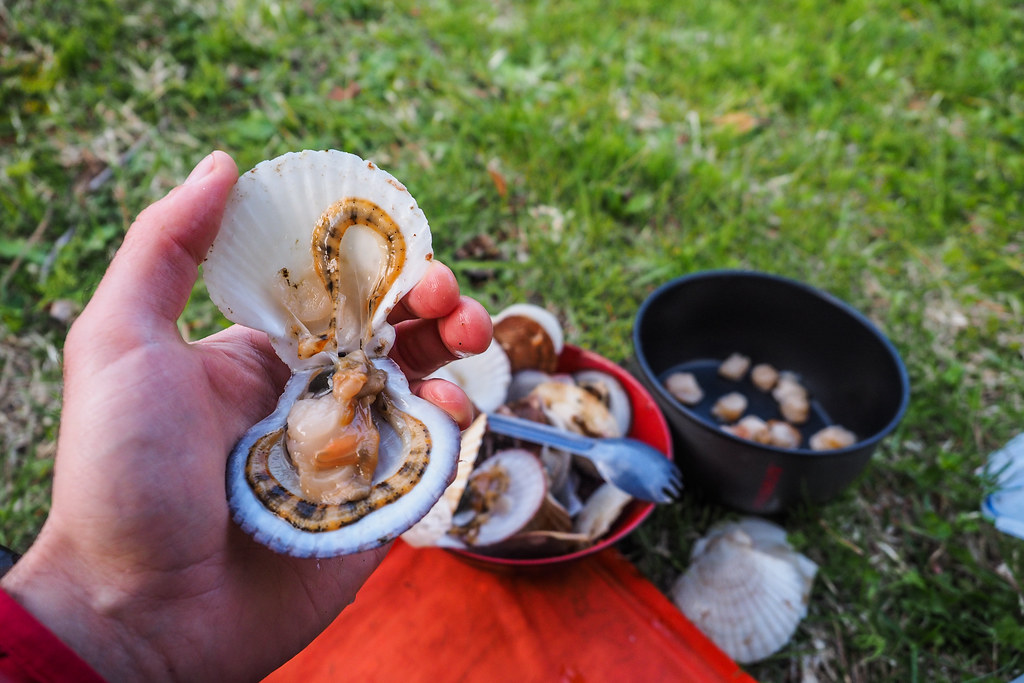 How did I come into possession of said bag of (rather small-looking) scallops? This happened the night before. At around 8pm, as Haidee and I were literally getting into our sleeping bags to go to sleep in our tent, we heard someone greeting us from outside. I clambered outside, and there was a fellow camper with a bag full of scallops for us.

“A local fisherman gave us a big bucketful, and we can’t finish them. Do you want some?” he asked. Due to the fact that Haidee is a vegetarian, and we were in the throes of going to bed, the offer caught me off guard. I started stammering something about my wife being a vegetarian, but not to be one to turn down a kind gesture, I put on a grateful face and took the bag from him. “I’ll cook them up for breakfast tomorrow morning,” I said. We chatted for a minute or so, and he left.

I was left standing there not quite sure actually what to do with them. I do like scallops, either raw or cooked. But shellfish that require anything more than being chucked into boiling water whole are, for the most part, beyond my threshold on the faff vs. culinary enjoyment scale. So I double-bagged them, put them in my bike’s handlebar bag, and went to sleep.

Back to this morning. Despite the requisite faff involved in carving out the fleshy scallop goodness, I decided that it would not be the done thing to have the scallops go to waste, so I got to work. I carved out the good bits with the end of a spoon and chucked them all into a pot with a generous block of butter. 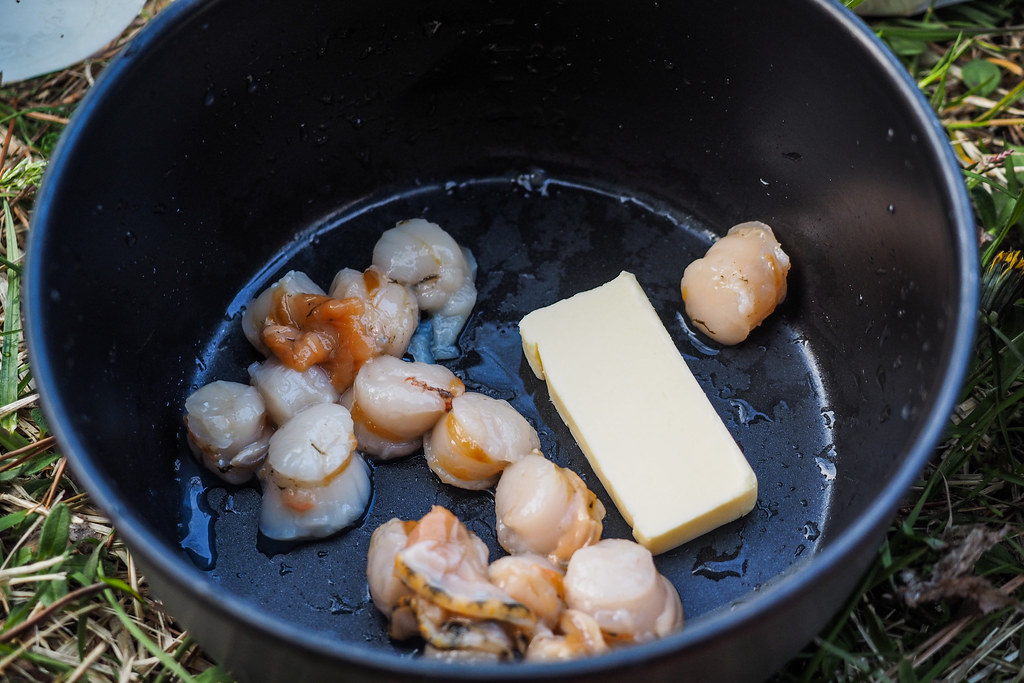 I then fried them in said butter over my trusty stove. 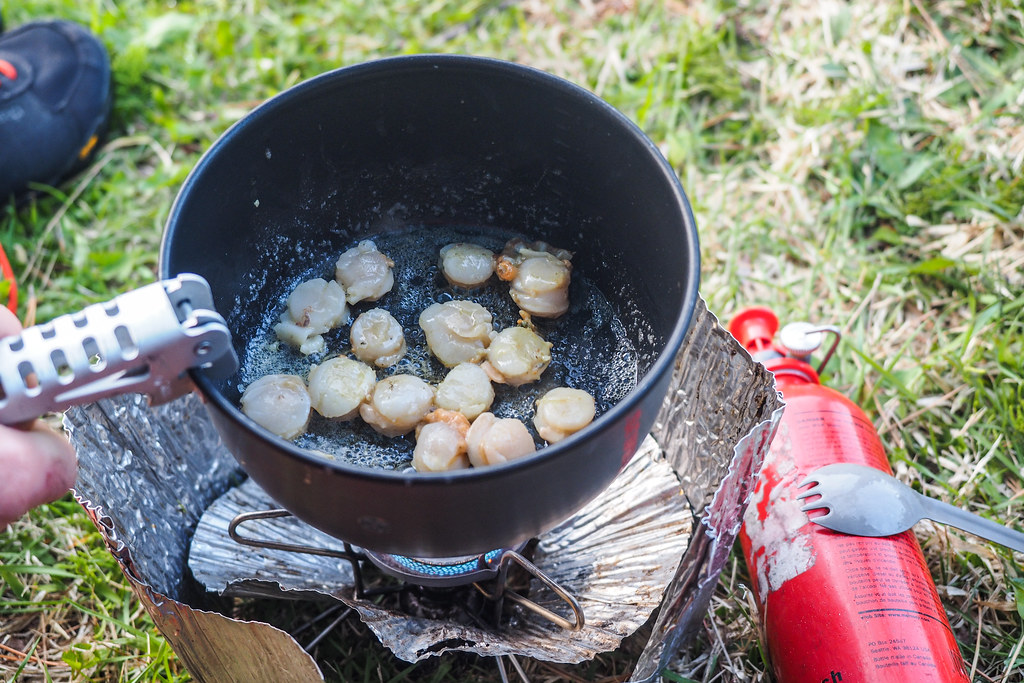 After just a few minutes, I sloshed in some soy sauce. This created a beautiful glaze. 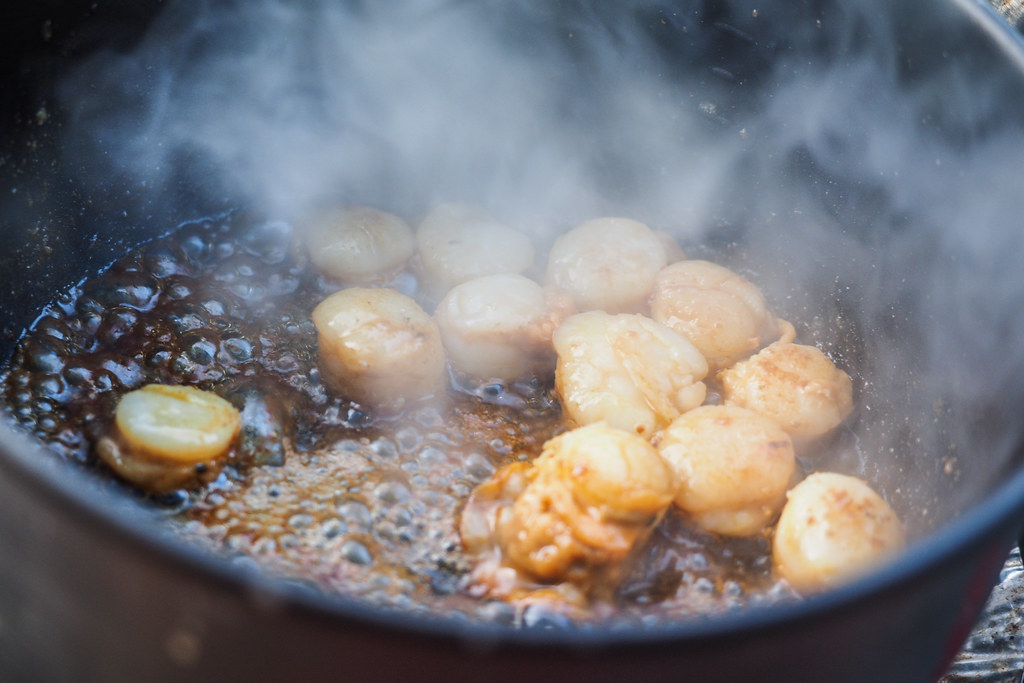 The result was about 15 little nuggets of deliciousness that were, after all that effort, worth the time. 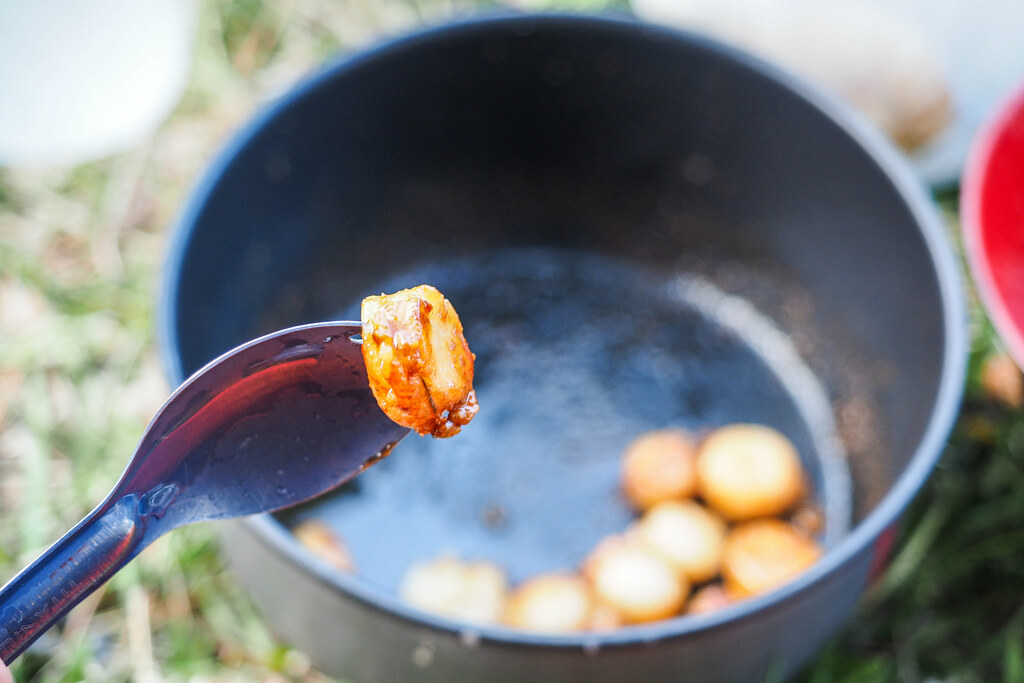 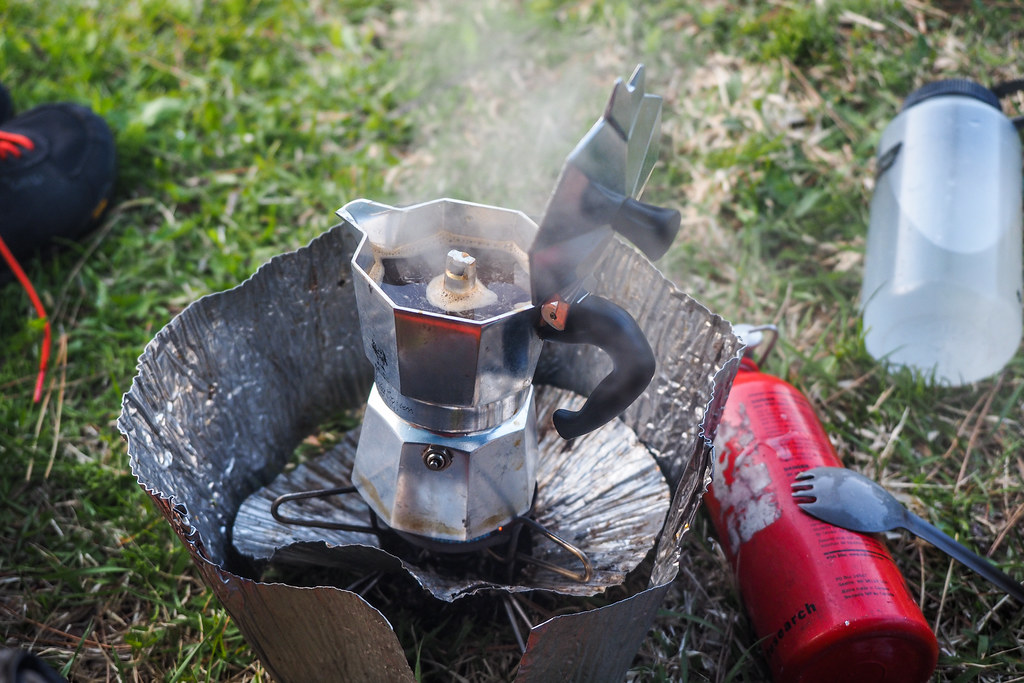 Breakfast done, we packed up quickly. If we were to get to the ferry terminal on time for check-in, we would have to get going quick. Taking a different route next to the beach on the way back, we started the day with an amazing avenue of pines… 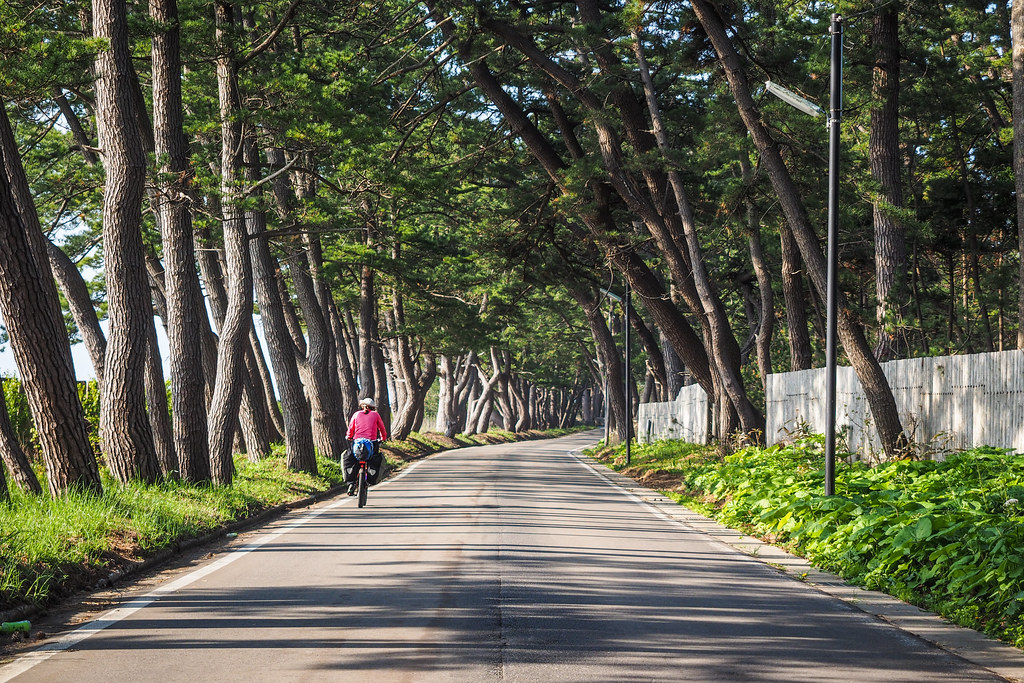 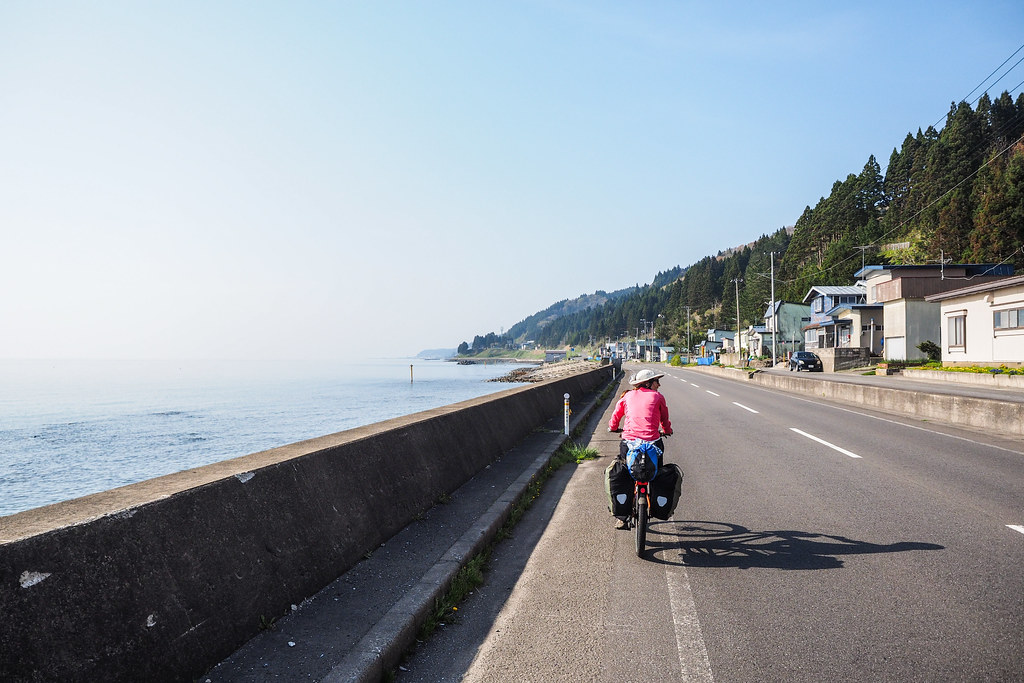 Arriving at the ferry terminal much more quickly than we expected, I took the opportunity to take a wee dip. It was jolly cold. 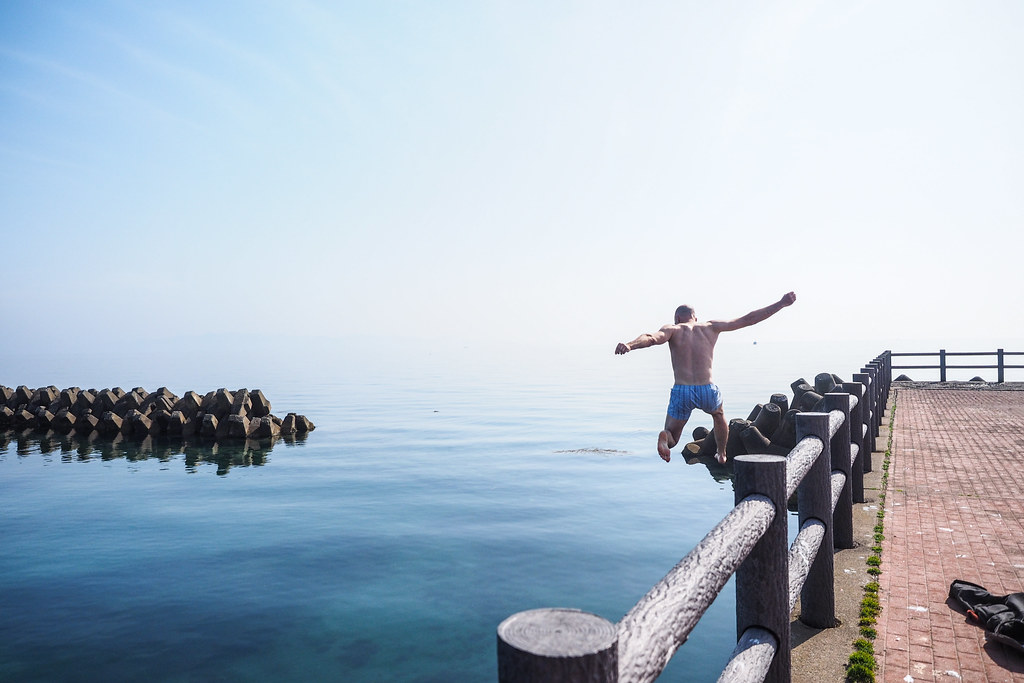 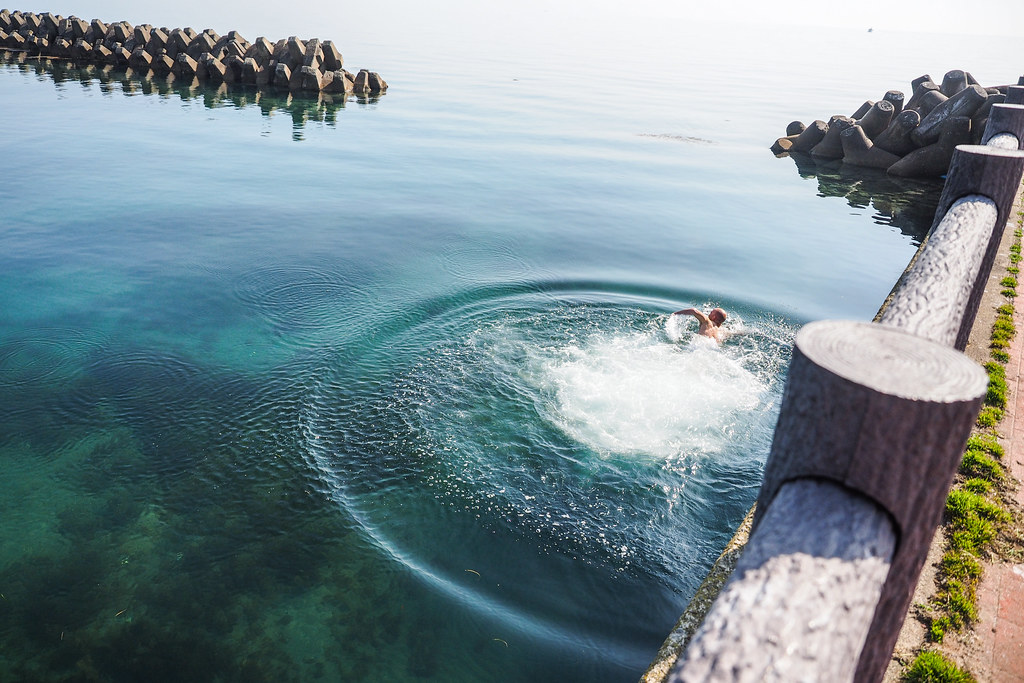 Dip over, we boarded the Mutsu Bay ferry. The 1 hour journey would take us across the bay to the Shimokita Peninsula – the large axe-shaped peninsula at the northern-most tip of Honshu. On the way over, we met Pierrot, a French Canadian who works in Akita Prefecture. He was on his own Golden Week cycle tour. After reviewing the map with us, he decided to take a southern route around the coast of Shimokita Peninsula to Mutsu City and on to Mt. Osorezan. We were planning to take a northerly route along the western coast, which would undoubtedly involve some considerable hill climbing and a 20km stretch of gravel road. On his narrow tires and wanting a faster route, Pierrot made the right choice – the coming days for us involved a lot of climbing, and definitely a decent stretch of gravel. Perfect if you have the time for it, but not the best if you’re on a time limit. 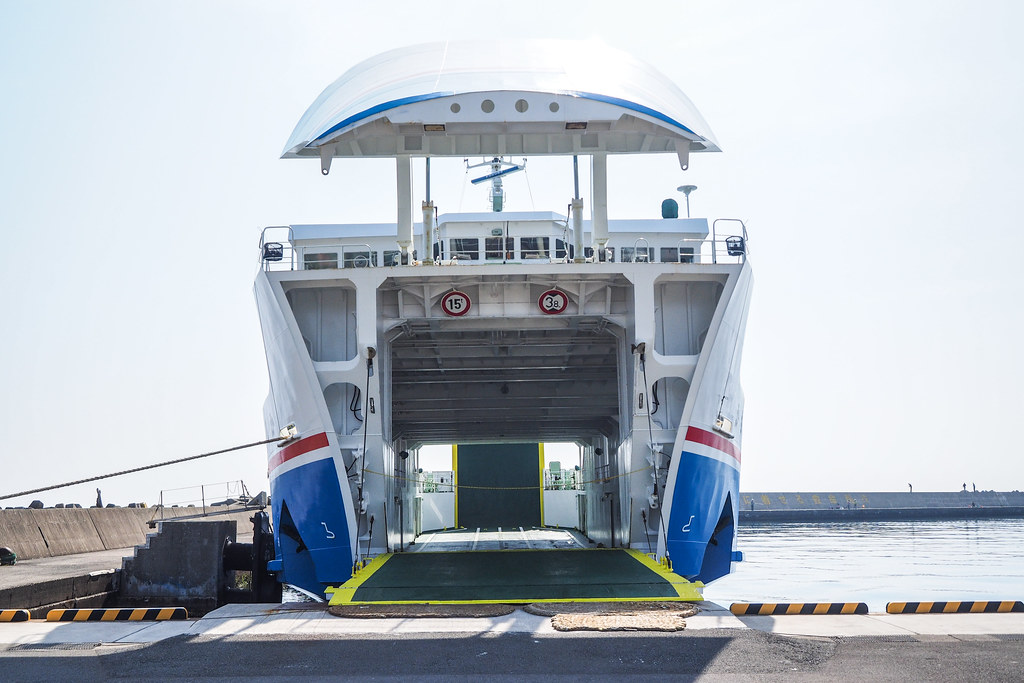 The ferry ride was fantastic. Perfect weather, and at least three large pods of dolphins to keep us entertained. 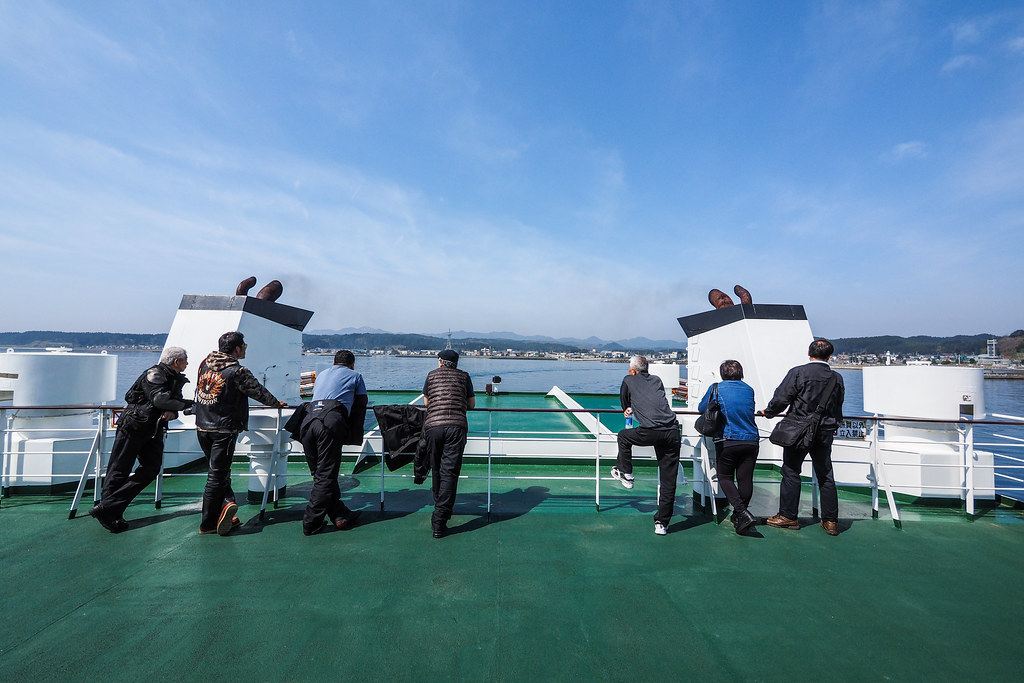 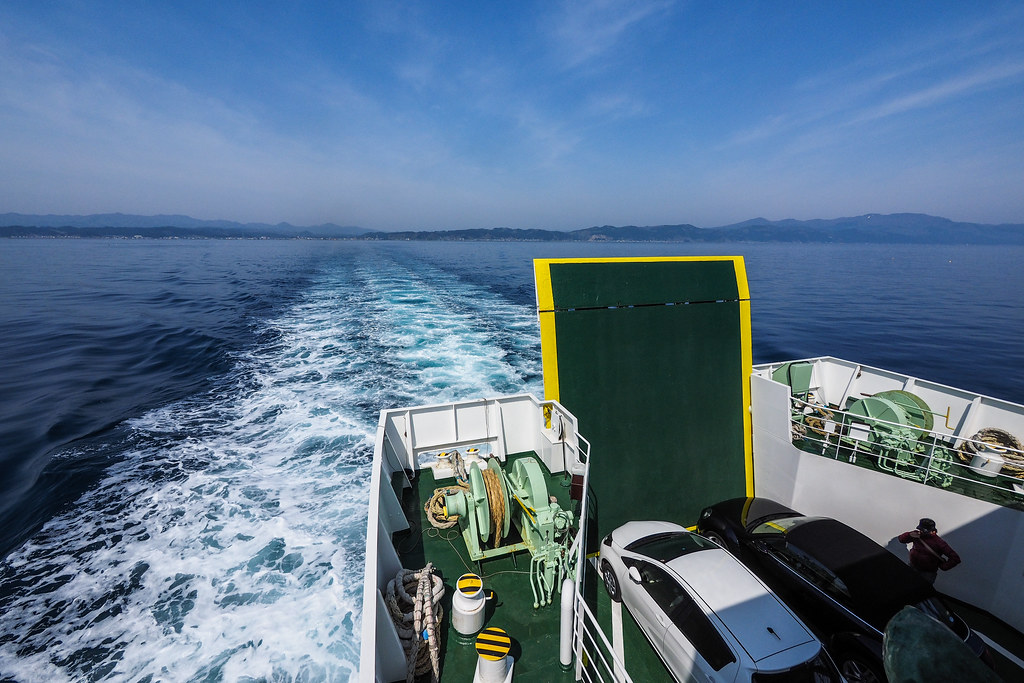 We arrived at the ferry terminal on the Shimokita Peninsula to what can only be described as sweltering temperatures (at least for this time of year). After a quick picnic lunch, we were both in our lightest clothing as we started the first of many steep climbs of the afternoon. By the time we arrived in the small fishing village of Fukuura in the evening, we would have climbed over 1,500m vertical. 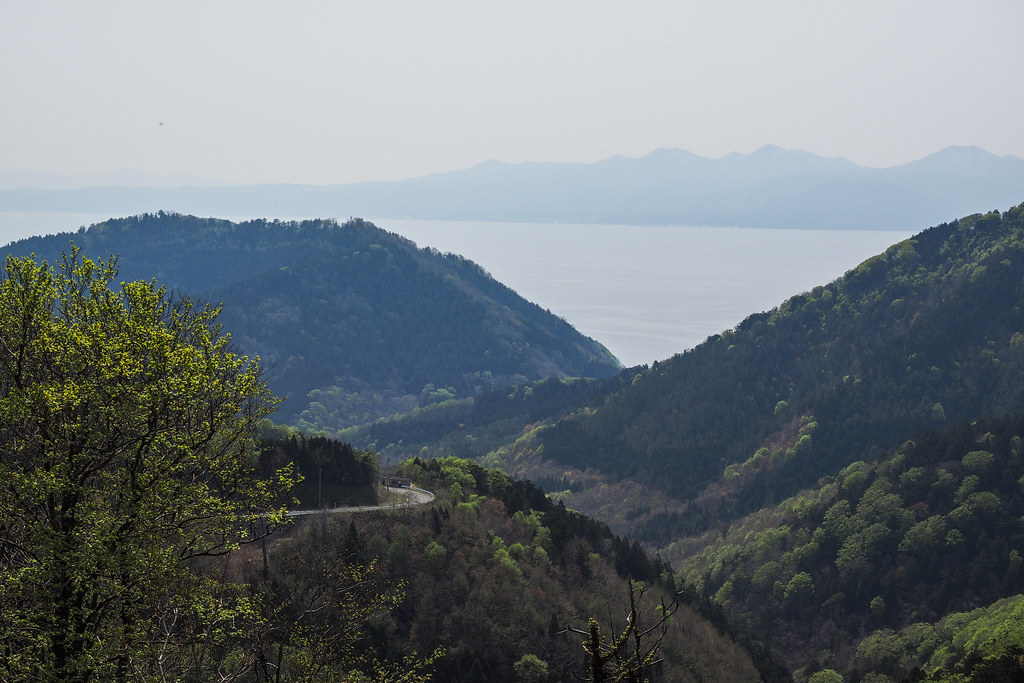 It is difficult to overstate the steepness of the climbs on this side of the Shimokita Peninsula. It is also difficult to convey just how beautiful much of the coast is. Beautiful quiet woods, birdsong, and craggy rock outcrops. 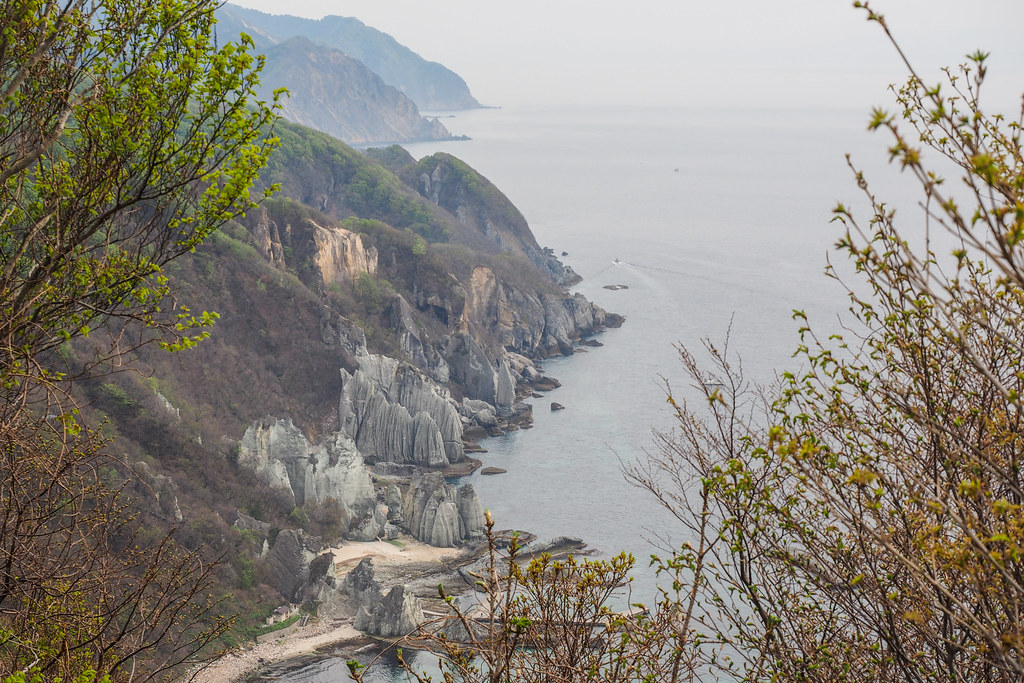 And what goes up must come down… 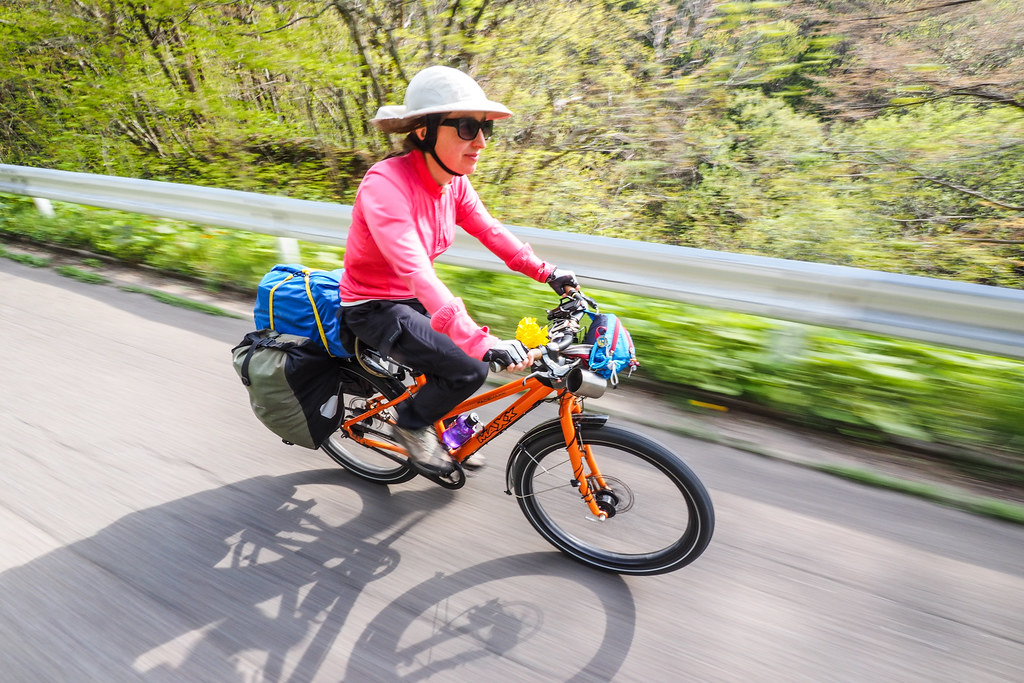 The original (ambitious) plan for the day was to make it all the way to Gankake-iwa, another large rocky outcrop with a campsite, another 15km down the coast. However, after dropping all the way down to sea level in the sleepy fishing village of Fukuura, and facing another massive climb to get up and over to Gankake-iwa, we decided to call it a day in Fukuura.

The problem was that Fukuura did not have a campground. A local suggested we pitch our tent on the school grounds, which would have been fine had there been public toilets nearby. The next day we would discover that there were public toilets at the opposite end of town, but overall it didn’t seem like an attractive option after such a tough day. So, after some deliberation we decided to stay at a minshuku. Minshuku are basic accommodation, sort of like AirBnB, but have been around way longer than AirBnB. And generally they offer not only breakfast but also dinner. There were a couple of options in Fukuura, and we more or less made our decision by random. We ended up staying at the lovely Namie-so (Google Maps link), run by an elderly lady (okamisan is the general term for women managers of minshuku) who was ever so gallant to let us stay at such short notice.

When we knocked on their door, and explained that we would like to stay the night, including dinner and breakfast, the okamisan was visibly taken aback. I can’t imagine that minshuku in Fukuura get many randoms off the street requesting to stay. But she very kindly allowed us to stay, and was very helpful with allowing us to do some washing in their washing machine, and accommodated Haidee’s vegetarian requirements.

“You can’t eat meat?” she asked in her thick Aomori dialect. “What about fish? No? What about shrimp? No? Hmmmmmm.”

Fukuura being a fishing town, Haidee was a rarity, it seemed. Indeed, as the spread below shows, Namie-so’s specialty is clearly delights from the sea. But after some very specific coaching, she got the idea and made a gallant effort to whip something up. My meal of seafood goodness was massive and incredibly tasty. 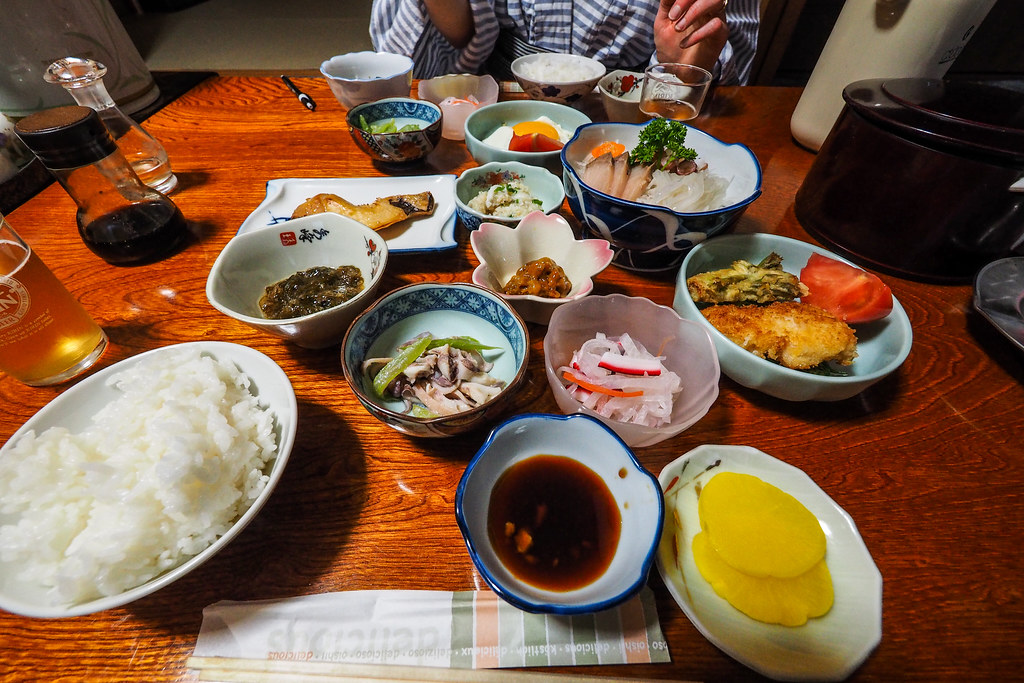 We retired to bed that night before 8pm with full stomachs and clean, warm bodies – the bath the okamisan had prepared was piping hot and perfect to ease away some of the aches and pains of a tough day.