Japanese squat toilets, pandas, grassy farm roads, and cherry blossoms in full bloom. A great way to finish a long-weekend tour. Last night, we went to sleep with rain. This morning, we woke to glorious sunshine. 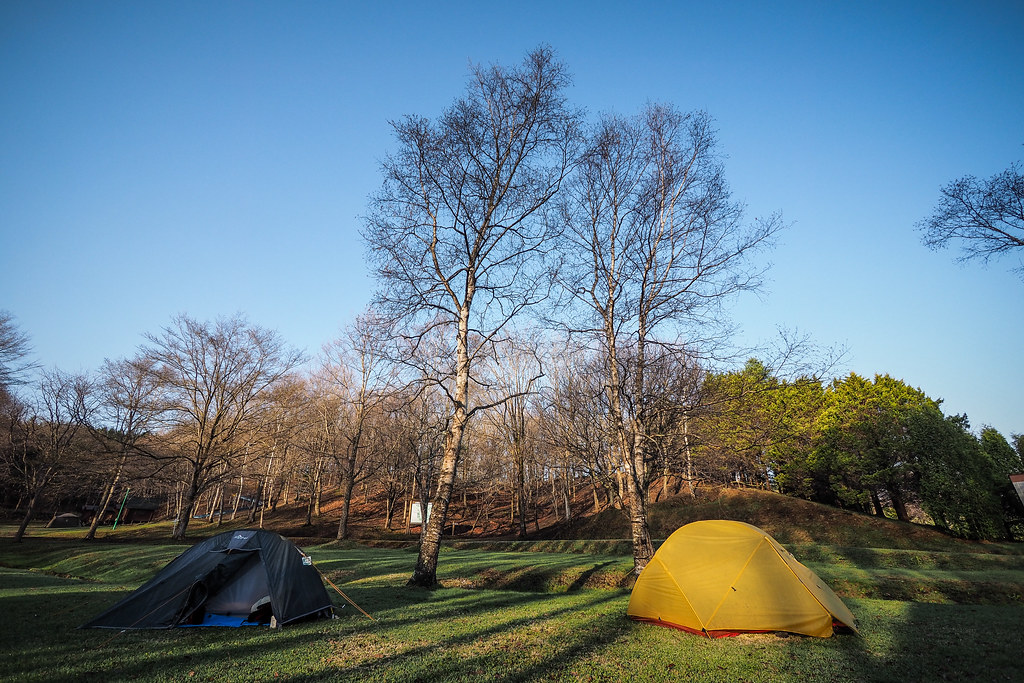 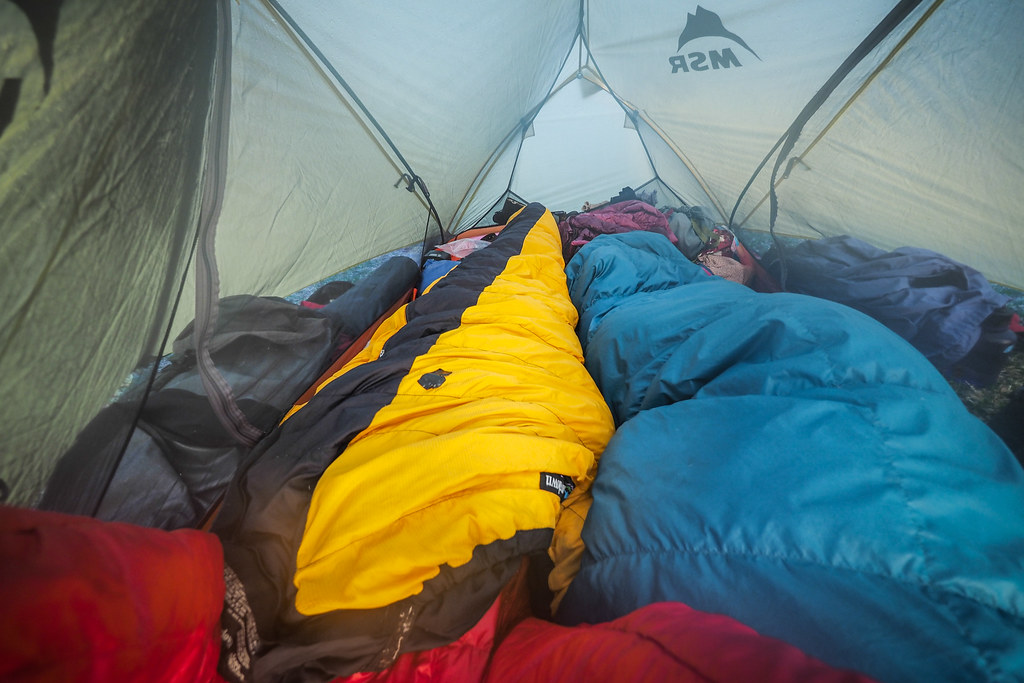 it was time for some morning coffee. 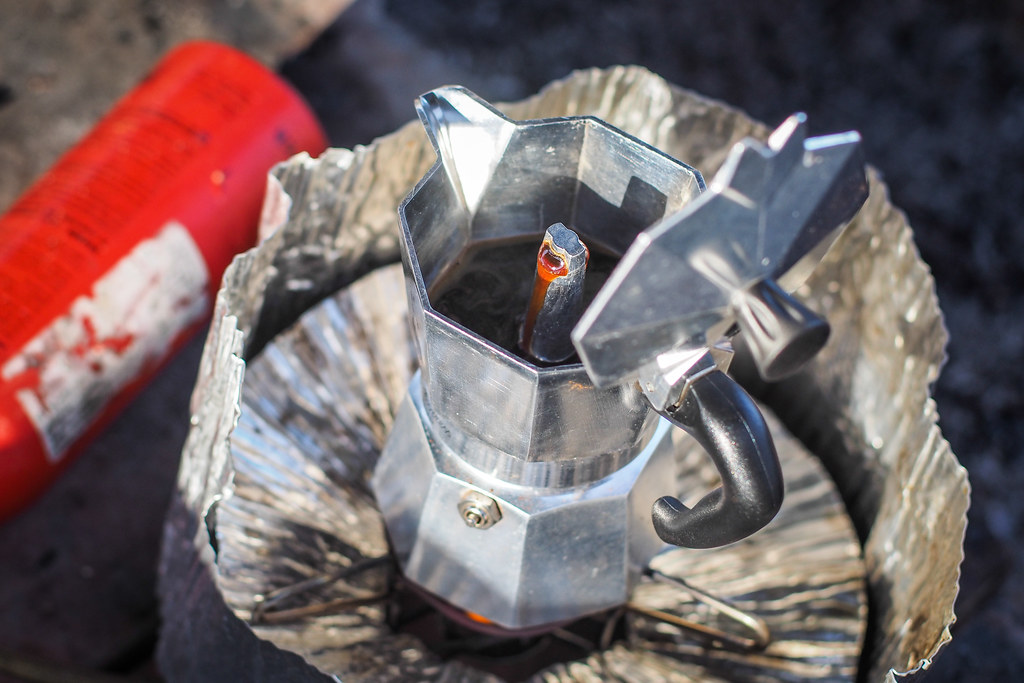 And then the morning ablutions. I mentioned yesterday we only paid 400yen each for a night in this campground. The facilities were mostly great, and we would learn later there was a new toilet block somewhere else, but the toilet block closest to us was of the ‘traditional’, shall we say ‘rustic’ kind. While I can use a squat toilet (I spent a good part of 2.5 years squatting while traveling), and the benefits seem logical, I only ever feel comfortable if I can find something to put under my heels while squatting…otherwise I am left flailing about trying to grab something in front of me to stop myself toppling backwards. On this occasion I didn’t have something to put under my heels. 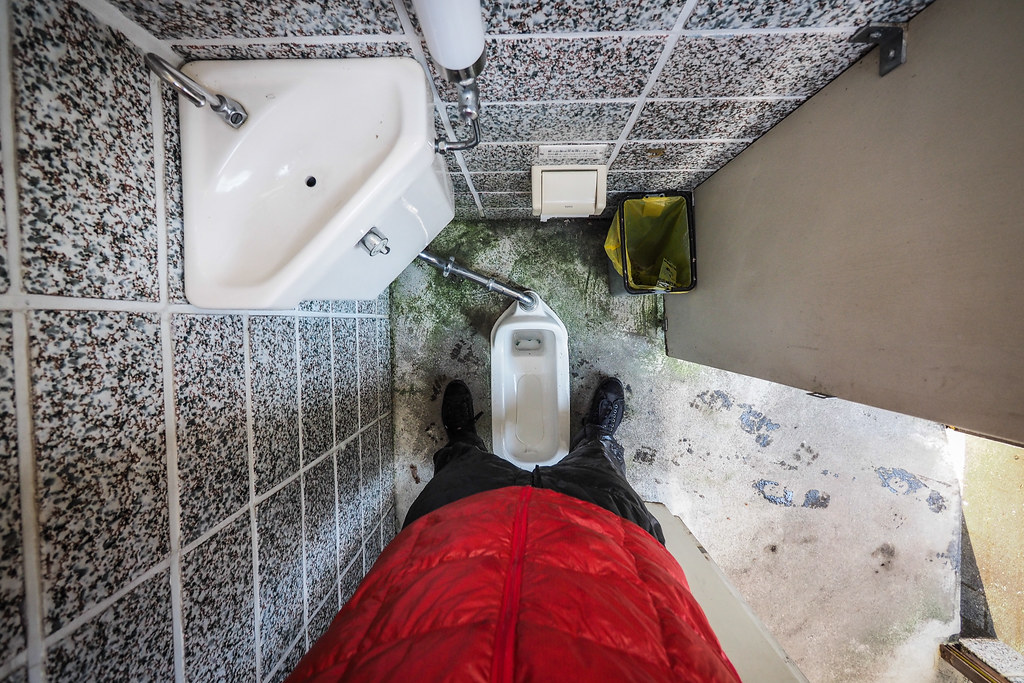 The mission was accomplished, however, and the effort was made up for by the excitement of the awesome slide at the campground. The eerie panda faces made the experience all the more interesting. 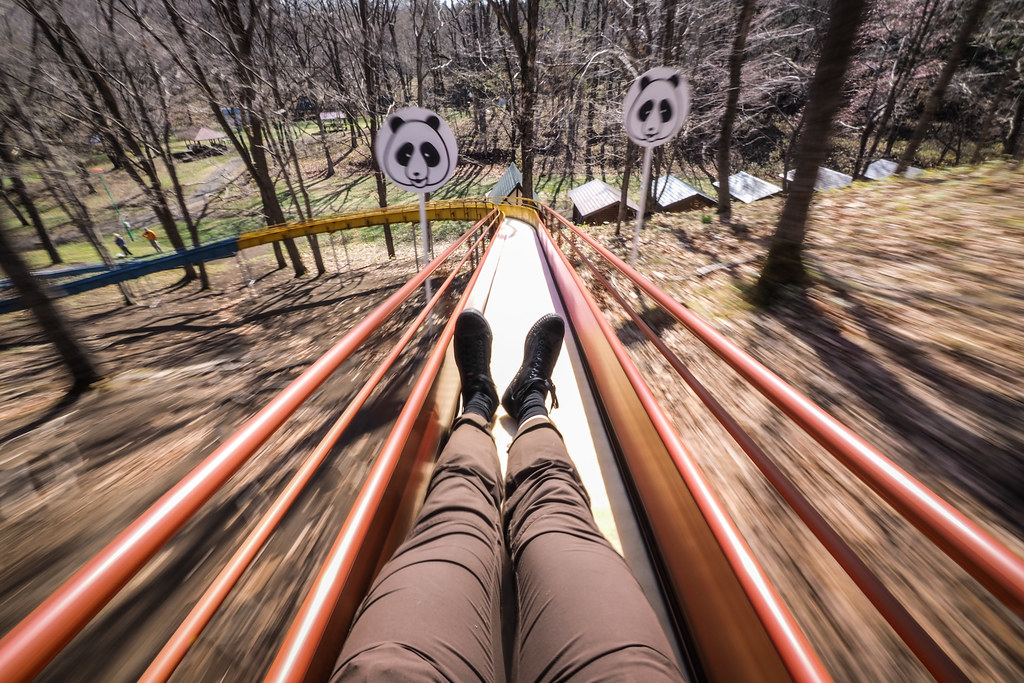 We got away from the campground late, at around 9:30am. By this time our tents were more or less dry. One more stop at the local Seven Eleven convenience store for a second breakfast, and we were finally on our way. 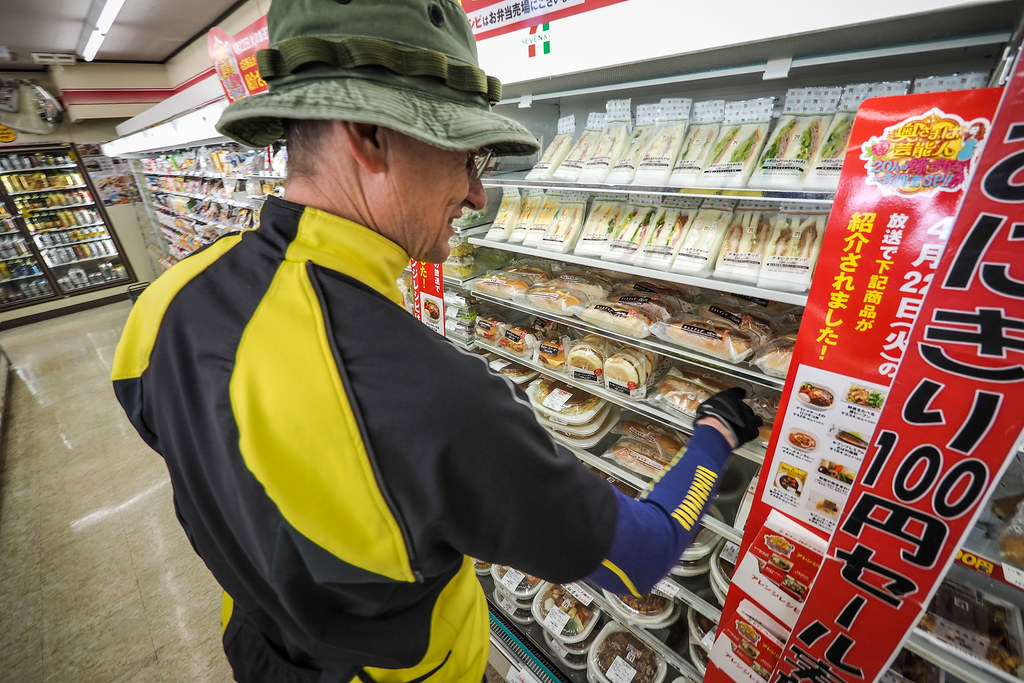 Straight into the kind of cycling I love. I have a new respect for Google Maps: this ‘road’ was marked on Google Maps as such. 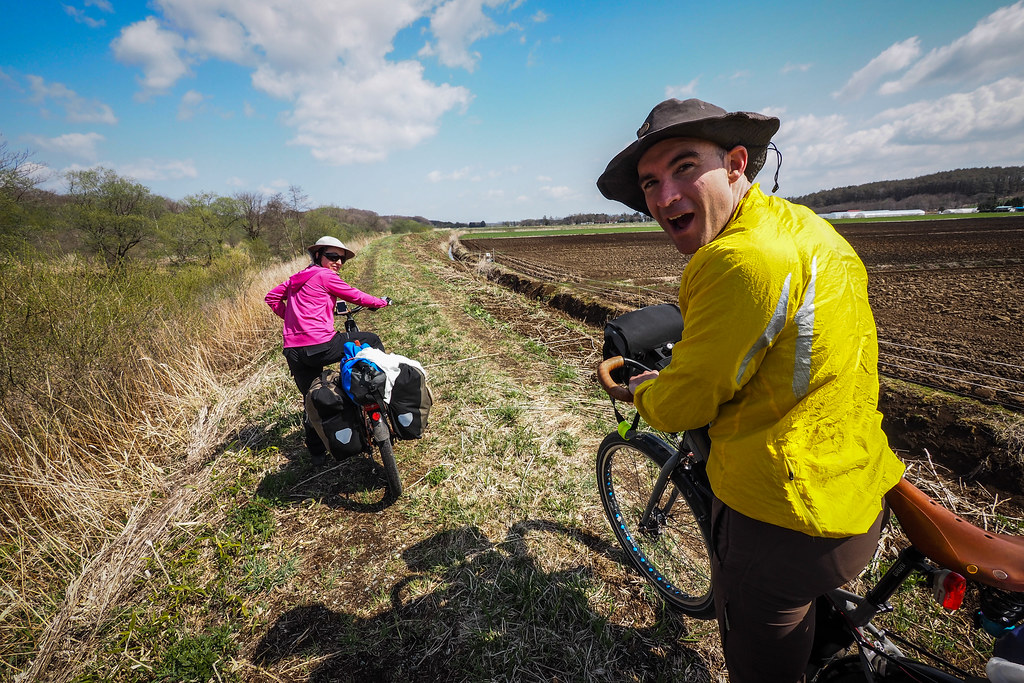 Our short excursion onto grassy farm roads would only last for a while. We soon found ourselves on moderately busy roads as we made our way towards Kita-Hiroshima, the town where the Shiroishi Cycling road starts. This amazing 20km cycling road cuts straight into central Sapporo.

Just before lunch we chanced upon one of the fairly ubiquitous farm-direct stores one can find in Hokkaido. While cycle touring here we usually come across one of these at a rate of one every few days of cycling. One of the best buys at these places are the shitake mushrooms. There will be the beautifully formed ones (sold at a reasonable price), but often there will also be seconds: the malformed rejects which taste just as  good and look just the same once they’re chopped up and sizzling away on your frypan in a pool of butter and crushed garlic. 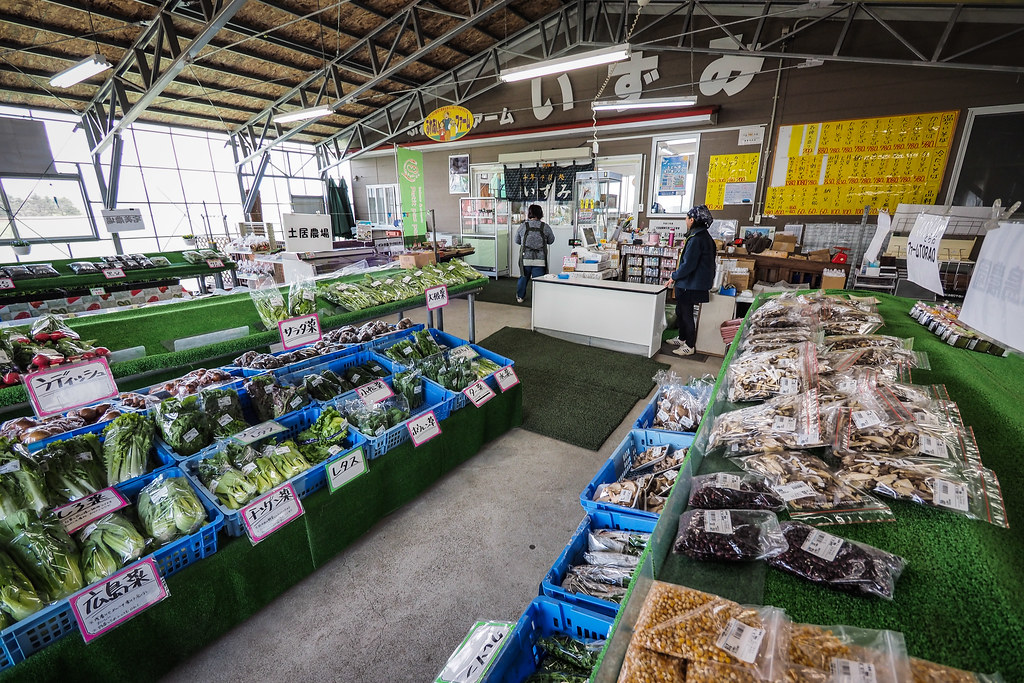 Back on the road after lunch, we had a mix of moderately trafficked roads… 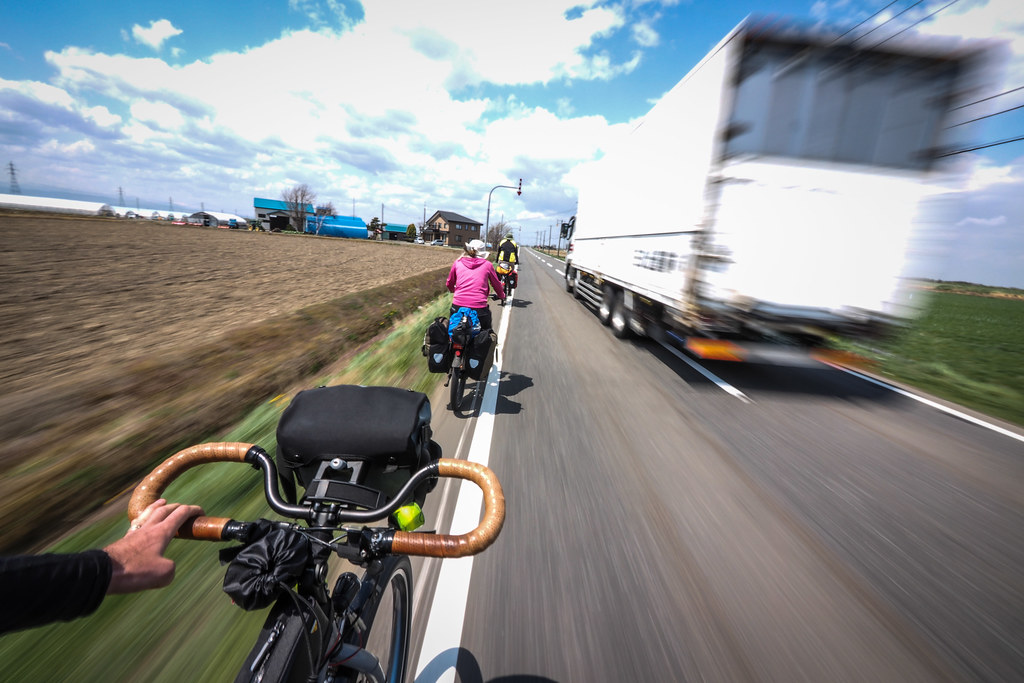 and quiet gravel under massive skies. 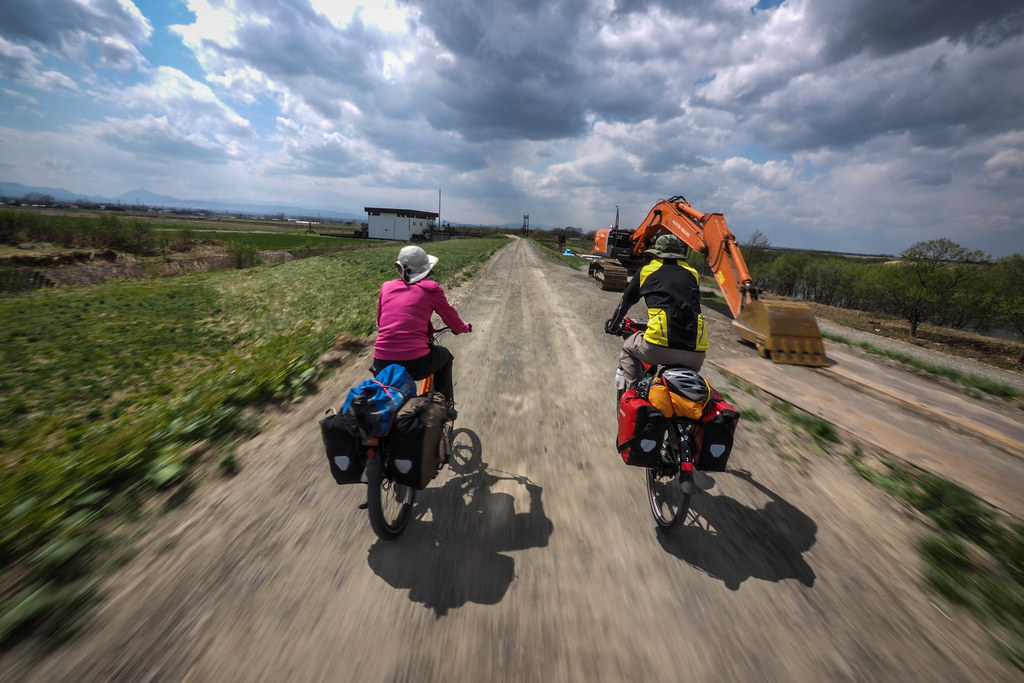 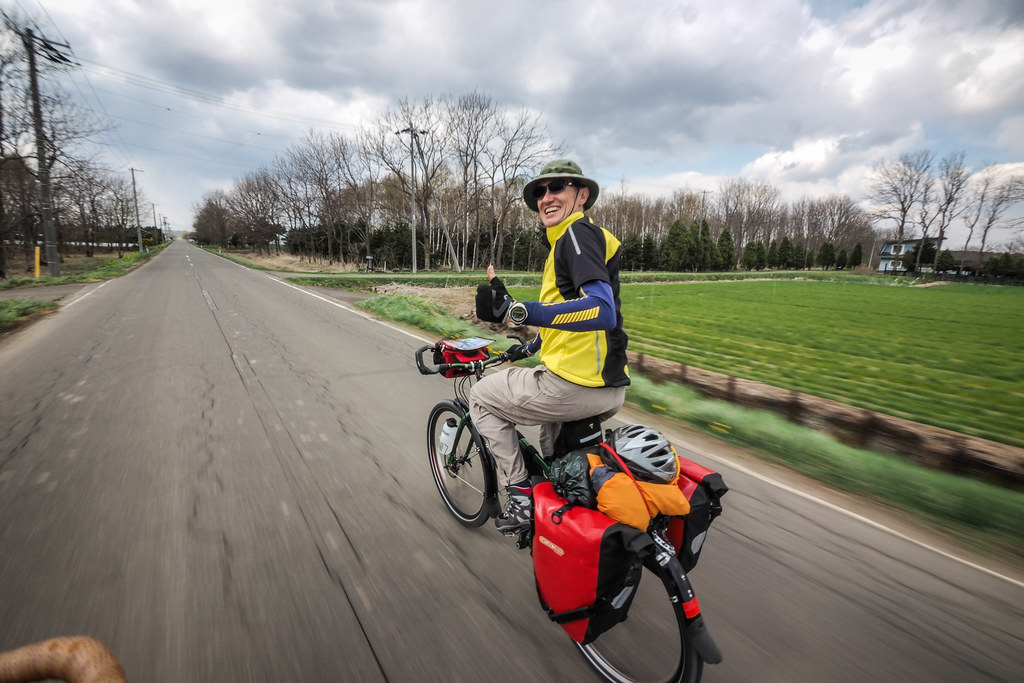 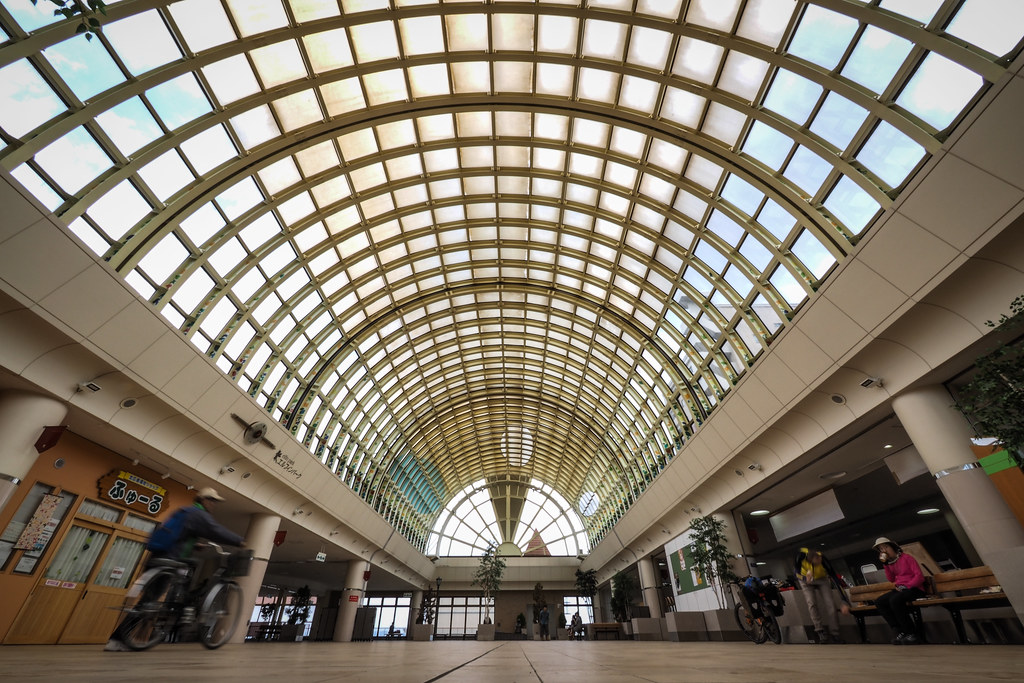 before hitting the Shiroishi Cycling road into Sapporo. Rick and I swapped bikes for a bit at this point. His is a brand new Genesis touring mountain bike with the hallowed Rohloff hub (a beautiful German-engineered 14-gear internal gear hub). It was a pleasure to ride. But isn’t it interesting how one’s bum gets used to one’s own seat…I was happy to get back onto my bike with its leather seat, formed to my rear end. 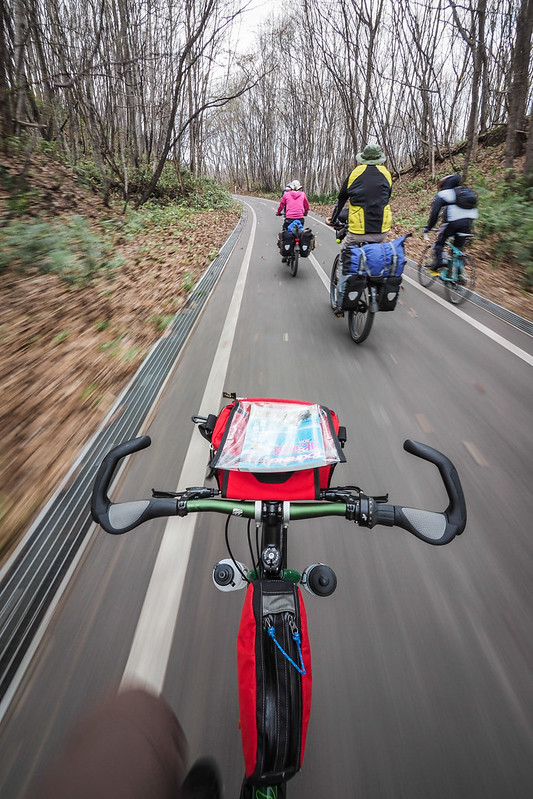 The highlight of the Shiroishi Cycling road at this time of year is the new spring growth. We were lucky enough to be on the road just as the blossoms were in full bloom. 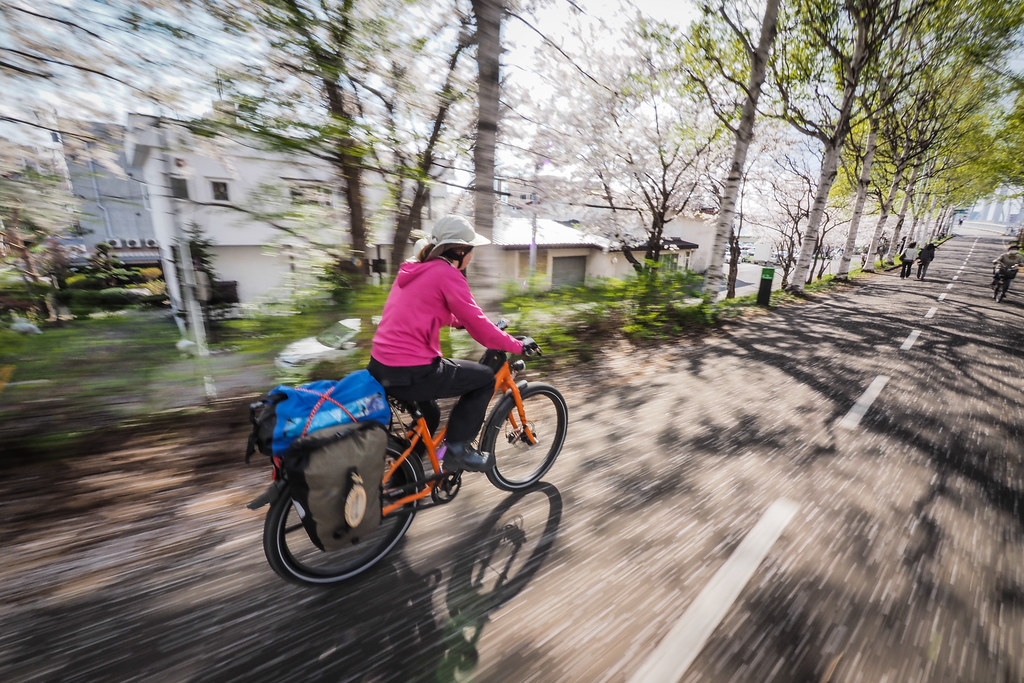 Which required careful dodging of pedestrians… 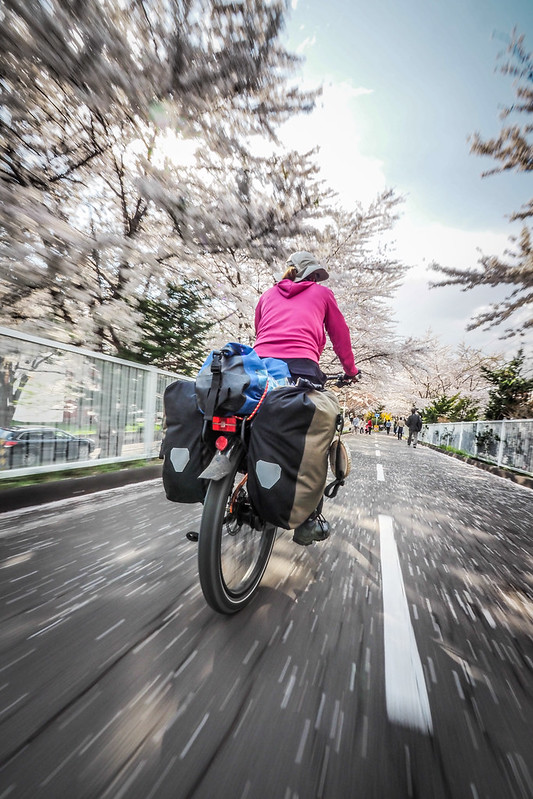 and keeping an eye on the road. 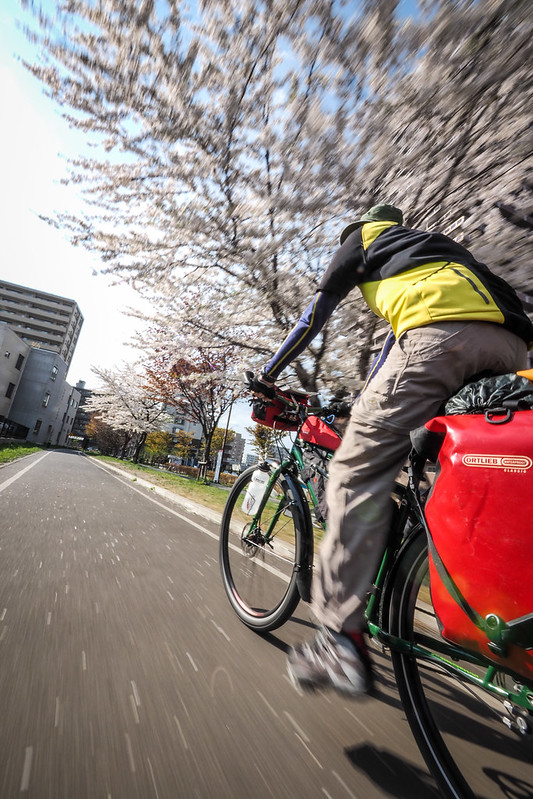 Distance for the day: 65km
Note the route map below does not show the Shiroishi Cycling road, which begins at Kitahiroshima Train Station.