Mt. Izari-dake (漁岳, 1,318m) is situated just 60 minutes to the southwest of Sapporo by car, and overlooks some of the best caldera-rim scenery in the area. For the last hour and a half of the (steep) climb up on the open ridge, the route offers expansive views towards Mt. Eniwa, Lake Shikotsu, and the secluded Lake Okotanpe. The round trip from the car takes four hours or less, making it a perfect half-day tour within reach of Sapporo City.

Mt. Izari-dake is located on the Lake Shikotsu caldera rim, at the northern side of the lake. It is about 50km southwest of Sapporo City. The winter ski touring route starts at the entrance to the Izari-dake Rindo forestry road, here.

This popular ski touring route up Mt. Izari-dake on the Lake Shikotsu caldera rim gives amazing views across to Mt. Eniwa and the lake. The first 2km or so of the route is on the relatively flat Izari-dake rindo forestry road, before it gets to the ridge at 720m.

This route is sometimes marked sporadically with tape tied to trees, but you’re best to assume that you’ll be navigating on your own.

In the route notes below, I mention that we got to the top in around 3 hours. This was aided somewhat by the fact we did the trip in spring conditions. In January and February, expect it to take longer if you’re breaking trail in fresh snow.

In mid-winter, the sidewalk near the entrance to the forestry road (here) is usually cleared. If you have a 4WD with enough clearance, you’ll be able to park there. Otherwise, there is a larger parking area 600m further up the road, here.

Take care with last eastern slope approach to the summit – it is an avalanche risk area, as mentioned in the Hokkaido Yukiyama Guide, p. 163.

If you manage to get down before 2:30pm, drive over to the excellent Marukoma Onsen (丸駒温泉) overlooking Lake Shikotsu. It is more than worth the 1,000yen entry fee. It is around 10mins by car from the trailhead to the onsen. For the location on Google Maps, click here.

The name of the mountain comes from the fact that Mt. Izari is at the source of the Izari River. Along the ridge from Mt. Izari is Mt. Koizari, Mt. Fure, Mt. Ninaru, Mt. Eniwa, Mt. Tarumae, Mt. Fuppushi etc. These peaks make up the Lake Shikotsu caldera, and you’re able to look over to those peaks from the summit of Mt. Izari. There’s no hiking trail up Mt. Izari, so the only way up Mt. Izari in the summer is via canyoning. Despite the long forestry road approach, this route enjoys great views on the upper reaches.

Despite the blustery and rainy weather from the day before, the day started off clear and dry – just as the forecast promised. I met Rick at Chitose Station with a rental car, and we set off from there towards Lake Shikotsu. If you have a Japanese license and can speak Japanese, I recommend Nikoniko rentals for the best value rental cars (all over Japan). 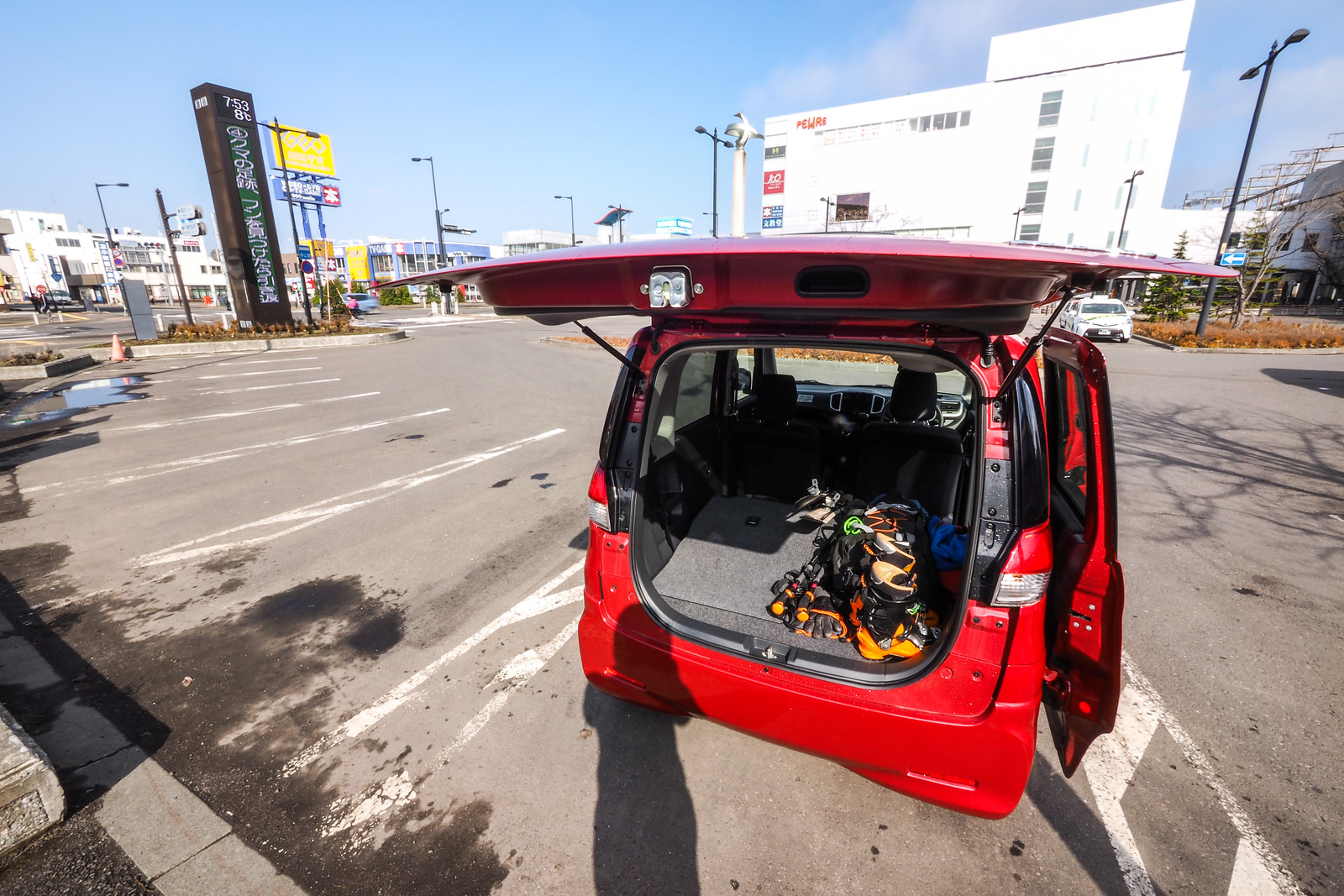 From Chitose station, it is less than one hour to the start of the forestry road, which you follow for 1.5km before heading up to the wide undulating ridge. Late in the season it is possible to drive the 750m from the main road to the gate. Otherwise, there is a small area for parking near the entrance of the forestry road (before crossing the river, if coming from the Chitose side). If that small area is full, then there is a larger parking area about 5 minutes walk back towards Lake Shikotsu. On this particular day, there seemed to be already quite a few people up the mountain.

Beyond the gate, the road was clear of snow. We were beginning to wonder how far of a walk it would be before we could put on the skis. In the end it was less than 500m before we could indulge in that beautiful sound of skins sliding across snow. Wet spring snow, but snow nonetheless. We were following the gorgeous Izari River for around 50 minutes, before heading left at around 700m in altitude to get to the ridge that would take us up to the peak.

Once on the wide ridge, it is a good idea to take bearings and add markers if necessary for the descent. It would be fairly easy to lose one’s way or miss a turn on the ridge in poor conditions. Even in clear weather, the relatively featureless ridge, with plenty of trees, can be confusing to navigate on the way down.

That said, there were plenty of old route markers along the way when we went up, making for easy navigation. From around half-way up the ridge, the route becomes steep enough to allow for massive views over Mt. Eniwa and Lake Shikotsu. This view stayed with us all the way to the summit.

This is a great hill to get some serious kick-turn practice in. The last 15 minutes to the peak, in particular, is very steep and requires some long diagonal traverses, punctuated with some smooth turns. Rick was getting better with each turn…when his skis cooperated, that is

We were at the top in just under three hours. The sun was shining, and all was well with the world. While we were eating lunch, a few more groups arrived, including a group of kids in gumboots and jeans. It is fair to say that on a clear day with stable weather, this is a fairly straight forward hill to tackle. It even comes with its own little shrine at the top.

The descent back to the car is rip-roaring fun…for the first 10 minutes. The super steep spot that requires the smooth kick turns is fantastic for getting in some smooth and fast turns on the way down.

From the col at 1,100m, however, the descent consists of some traversing which includes some 5 minute side-stepping climbs, punctuated with some short fast downhill bits, and then some flat pushing, and then some fast tree-dodging, before being spat out onto the forestry road. The forestry road descent is not particularly exciting, and does require some pushing. This is generally the reality of skiing the lower hills around Sapporo – long-ish approaches on forestry roads and plenty of trees to dodge.

The forestry road threw us a couple more curve balls typical of this late spring season, with the road clear of snow in places, requiring some last-minute clambering before arriving back at the car. All in all though, this is a fantastic half-day ski within very easy reach of Sapporo. I’m sure it would be even more magnificent in mid-winter.

Done this route to Izari-dake, or others nearby? Thinking of doing it? Please post any feedback, reports, or queries here. Thanks!