Mt. Okotanpe (オコタンペ山 – 968m) is classed as a beginner’s mountain in the guidebook. This is probably a reasonable description if you are on snowshoes. If on skis, you’ll want to be confident of your steep uphill zigzagging and steep downhill tree-dodging skills, such that I’d class it more as an intermediate hill. We made it about half way up before calling it a day and heading back down. That said, even from half way up the route, there are great views over Lake Shikotsu and Chitose City. It is a fun, compact mountain with a clearly defined ridge to follow.

This route is just north of Lake Okotanpe, on the northern side of Lake Shikotsu, about 1.5hrs drive south from Sapporo City. The trailhead is here.

While this route is included in the Hokkaido Yukiyama Guide – which is a guidebook for backcountry skiing in Hokkaido – this route does pass through fairly thick stands of trees most of the way. The summit will allow for great views across the Lake Shikotsu caldera, however, so if you’ve only got half a day to do some exploring, this is a worthy destination.

There are no public transport options to the start of the route.

Marukoma Onsen is highly recommended – it is on the shores of Lake Shikotsu here. Like most onsen at Lake Shikotsu, day visitors are not admitted after 3pm, so make sure you get down in time.

It’s not named on the map, but while its trig point name is Ootanbetsu (大丹別), people tend to call it Okotanpe-yama. Perhaps that’s because it is right next to Okotanpe Lake. From the summit, excellent views can be gained over Lake Shikotsu’s caldera rim, including peaks such as Mt. Eniwa-dake, Mt. Izari-dake and others. Highly recommended for climbers on snowshoes.

I was on the lookout for a relatively easy, straight forward hill near Sapporo, so that Haidee could get some more practice in the backcountry. So, seeing that the guidebook classed Mt. Okotanpe as ‘beginner’, we cheerily headed out towards Lake Shikotsu, looking forward to some easy skinning and nice views on this sub-1,000m mountain. We also figured that because it was supposed to be such a straight forward hill, we’d be up and down it in time for an onsen, and then meeting Haidee’s brother at the Lake Shikotsu Ice Festival in the evening.

We did manage to get an onsen in and meet Josh at the ice festival, but the Okotanpe climb did not pan out quite like we had planned. The first challenge was getting the car parked up on the sidewalk next to the forestry road entrance. We finally got our small 4WD rented Toyota Vitz up with the help of gravity (pointing downhill) and snow piled up against the curb. We also successfully signed in at the start of the route, as all responsible mountain-goers should.

The route up Mt. Okotanpe starts to the left about 50m past the gates to the forestry road, just after the sign-in box. This seems to be a very popular route, so you’ll likely be following snowshoe tracks for most of the way. The first 200m or so is fairly sedate, passing through a small area of well-spaced small trees.

Soon enough, the steep climb begins up to where the ridge flattens out at 746m. By steep, I mean at least 30 degrees in many places, requiring a lot of zigs and zags, and some very sharp kick-turns. As insult to injury, when we were there, new snow had not fallen for about a week, so the snow was slippery, with skins not holding traction very well.

Once above the 746m mark, there was evidence of substantial cornices, and when we were there, parts had moved, exposing the sasa bamboo grass under the snow. We kept to the westerly side of the ridge, among the trees.

It was not much past this point that we decided to head back down. It had taken us much more time that anticipated to get to this point, and not going to an onsen was not really an option. We needed to get back down to the car ASAP so that we’d make it for the 3pm closing time of Marukoma Onsen.

Haidee’s comment on the way down summed up her experience on the steep, crowded-with-trees slope: “Look at me, I’m backcountry grooming,” she said as she side-slid down the slope. “I feel so bad for flattening out the upward track,” she grimaced. But there was nothing to be done for it. She did well to get down on her skis, and was much more at home on the lower slopes where the trees were more sparse and the gradient not as steep.

I am by no means an expert skier, but I found the going easier, reveling in the tight quarters and steep terrain. The guidebook’s “beginner” rating may refer to if you’re on snowshoes. On skis, you’ll either want to be accustomed to skiing in heavily wooded slopes, or be keen to hone your skills on such a slope.

Perhaps the highlight of the day, however, was the Lake Shikotsu Ice Festival. Each year the Shikotsu Village puts on the festival, akin to Sapporo’s snow festival. The difference is that the ice festival is a little more raw. A real labor of love for the villagers, who spend almost 4 months preparing the framing and spraying water on it to form some incredible ice formations. 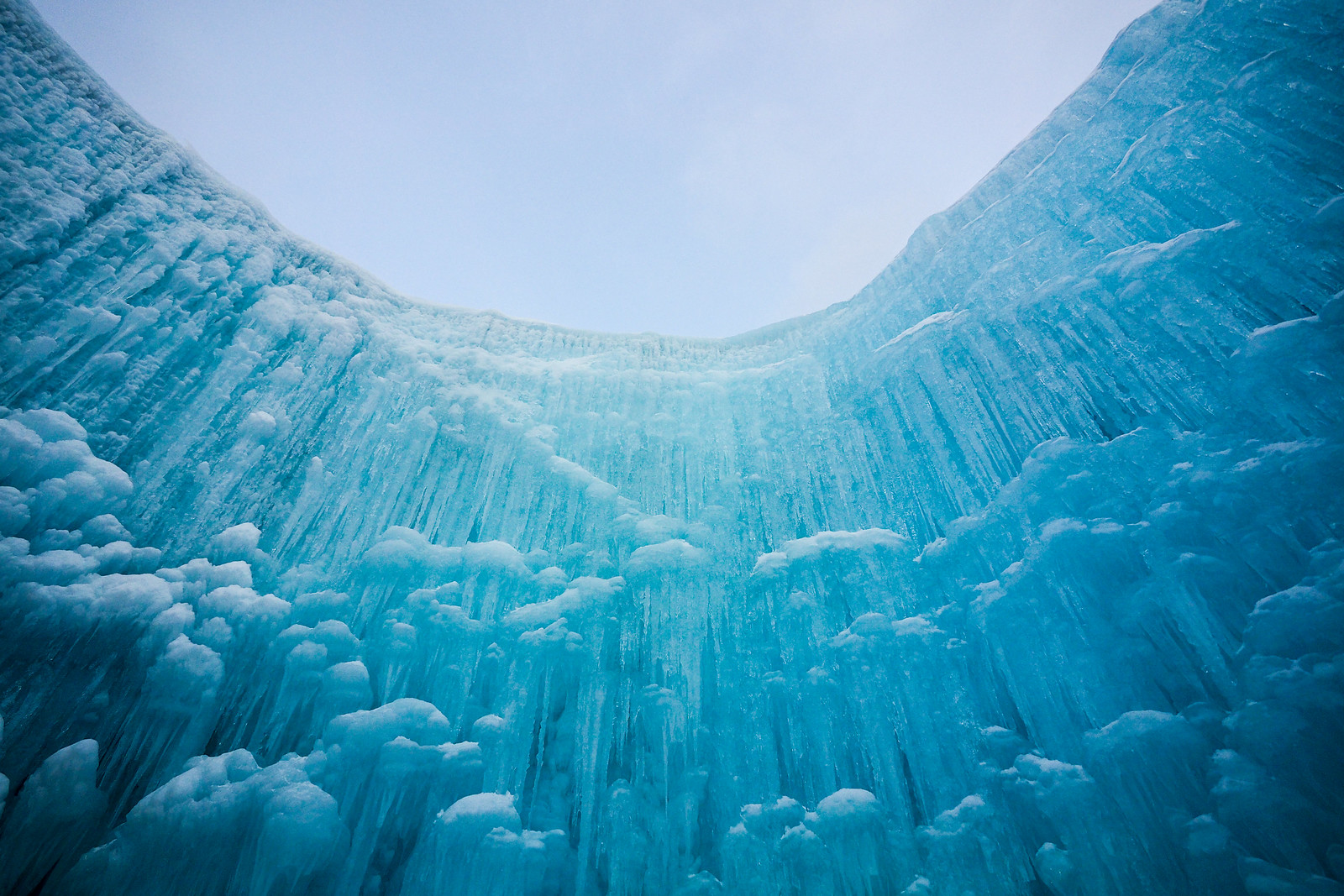 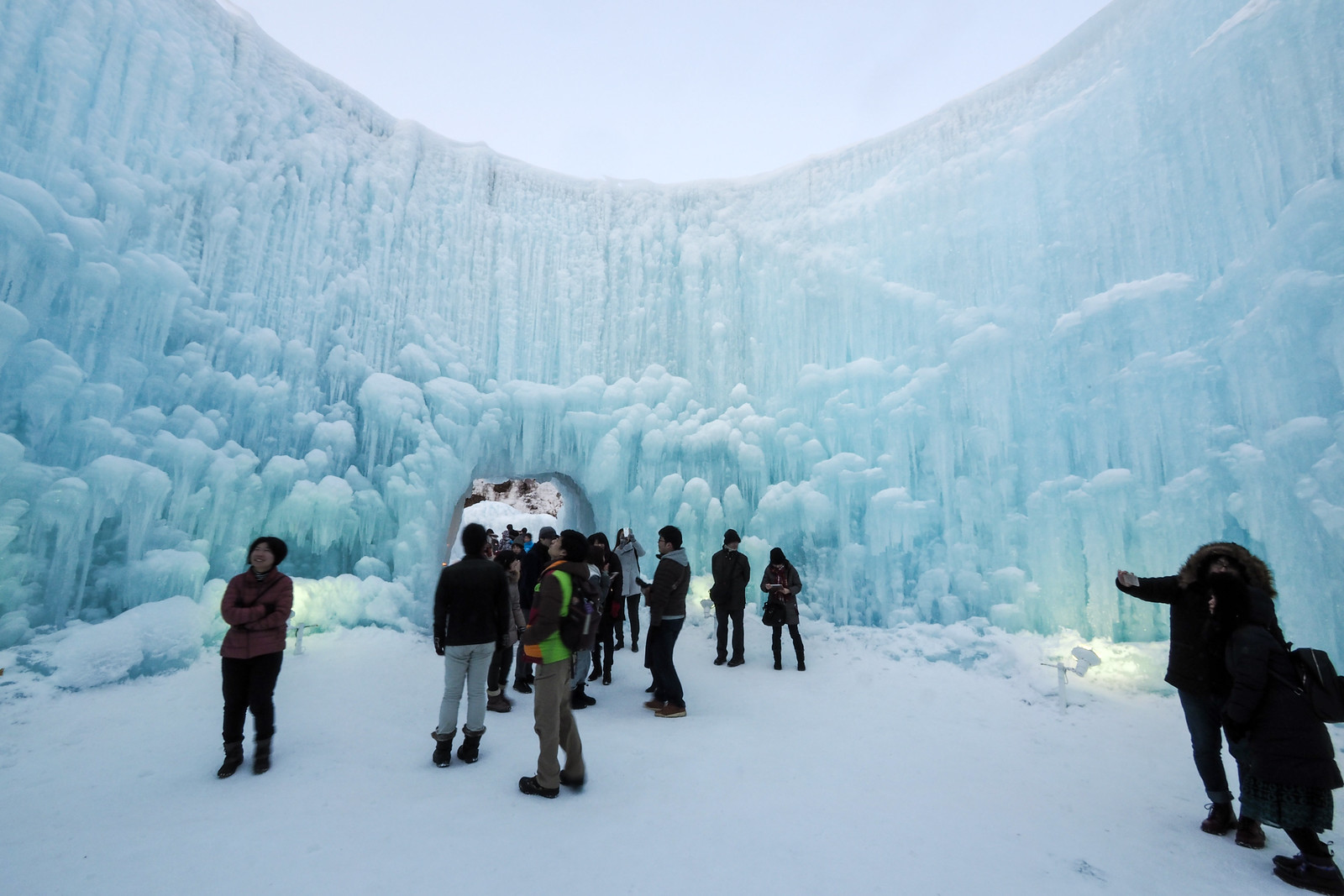 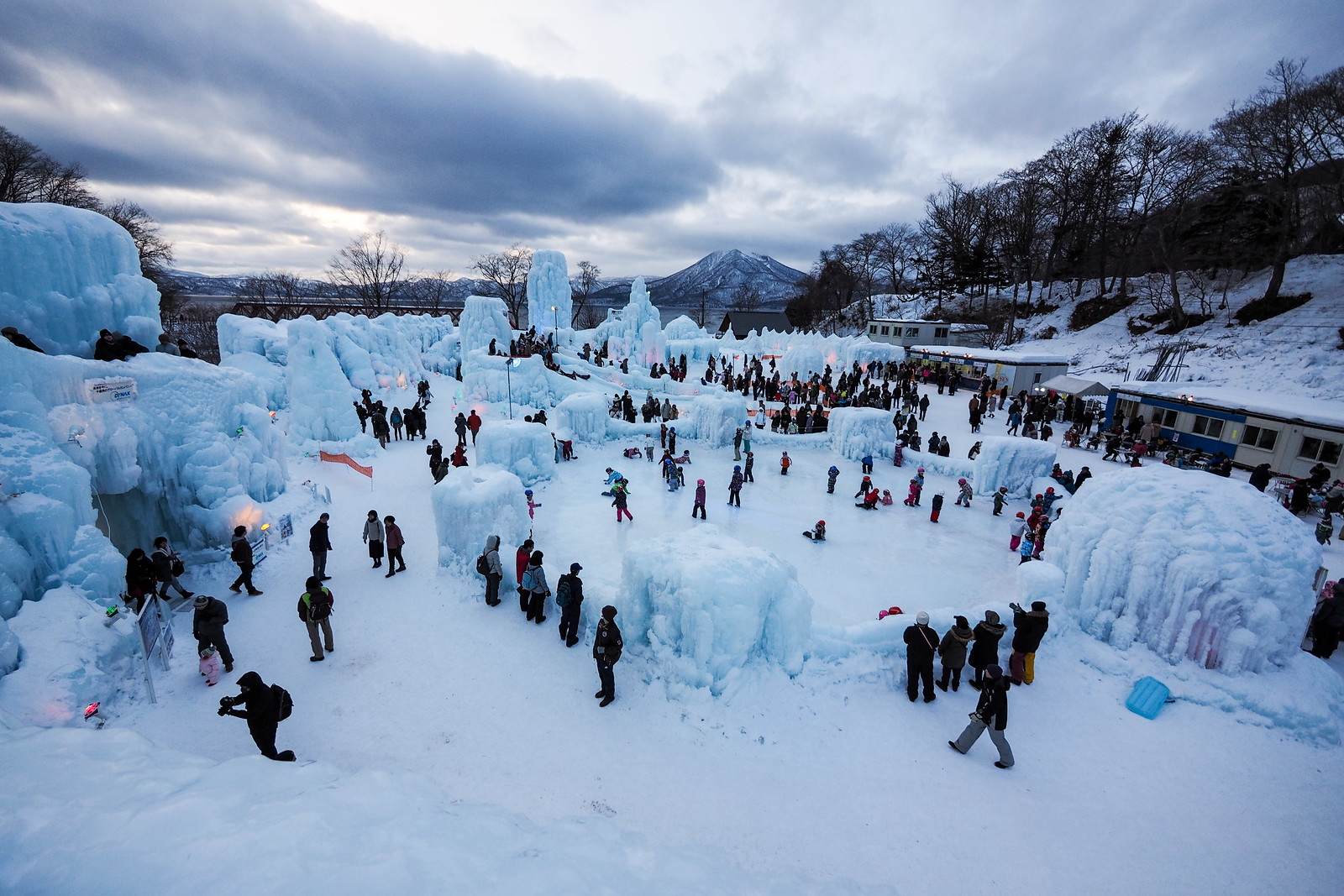 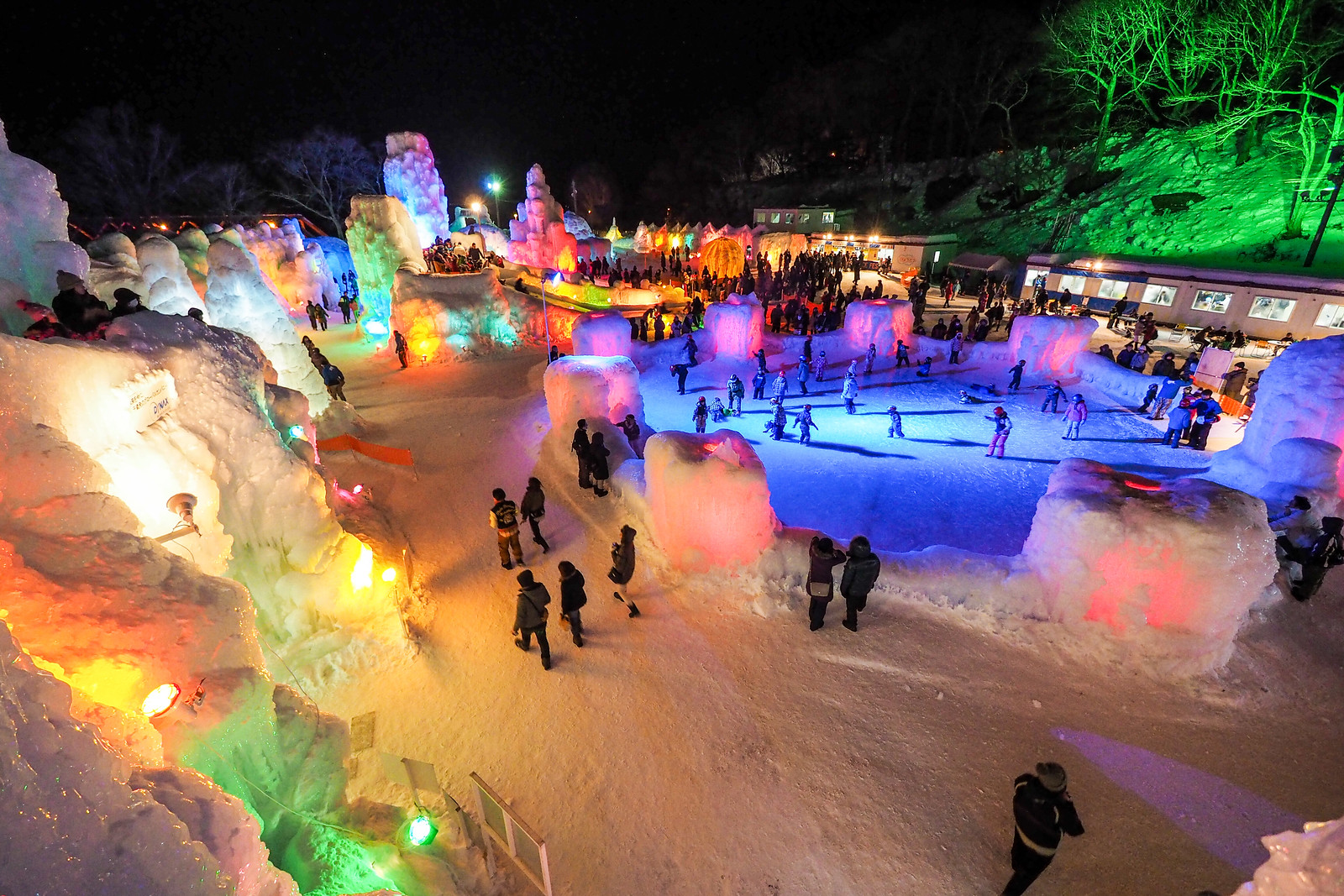 Haidee’s brother was a little late in arriving, but we made the most of it. The best of the cafe’s we sampled while waiting was the canoe tour outfit Kanoa – they convert their canoe tour operation into a cafe in the winter, and do an amazing hot chocolate (location). A perfect way to end a very nice Saturday outing! 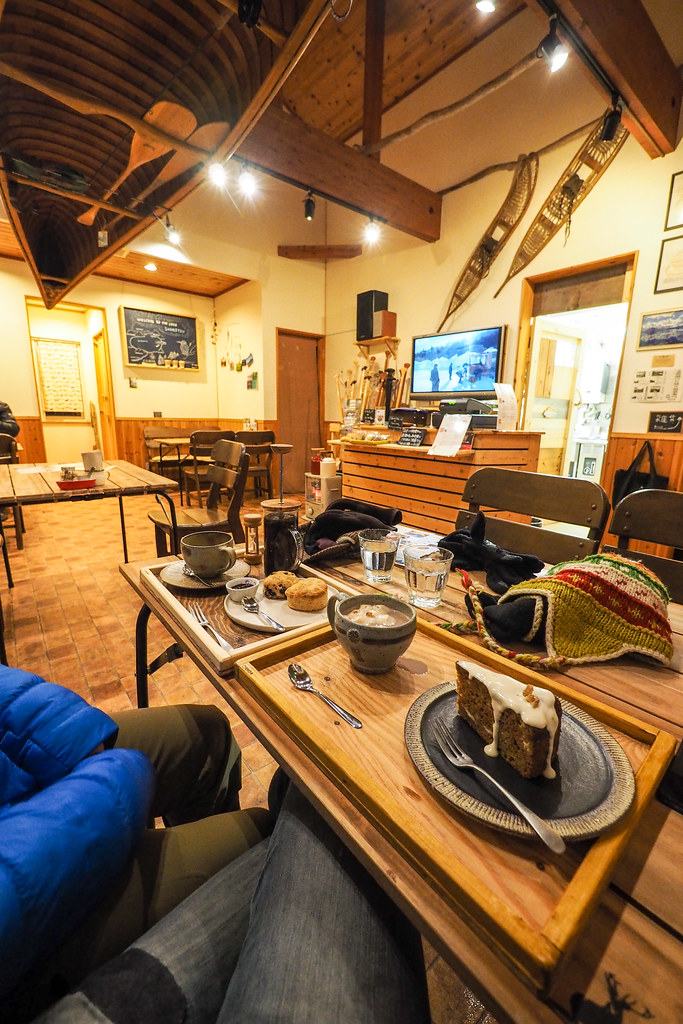 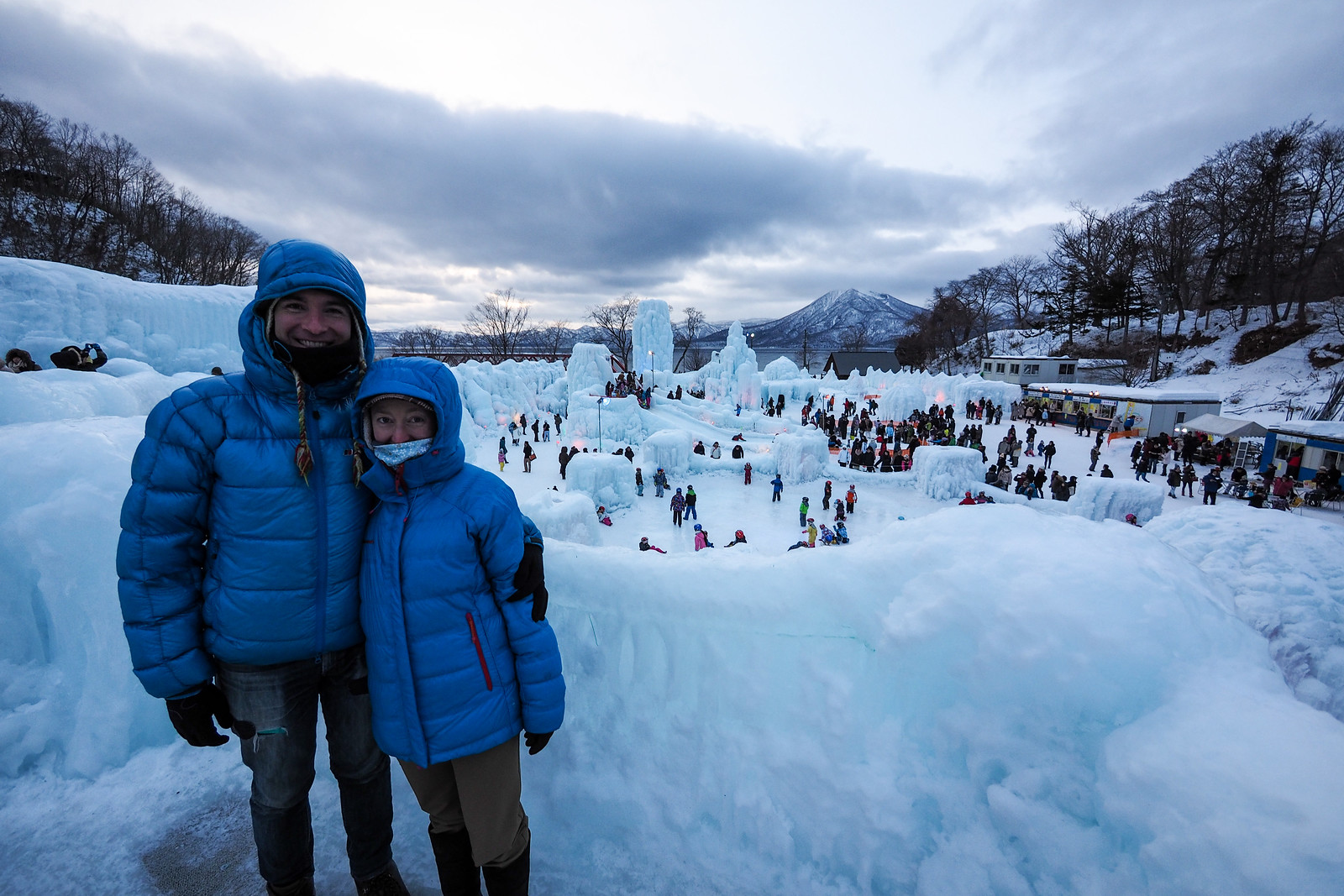 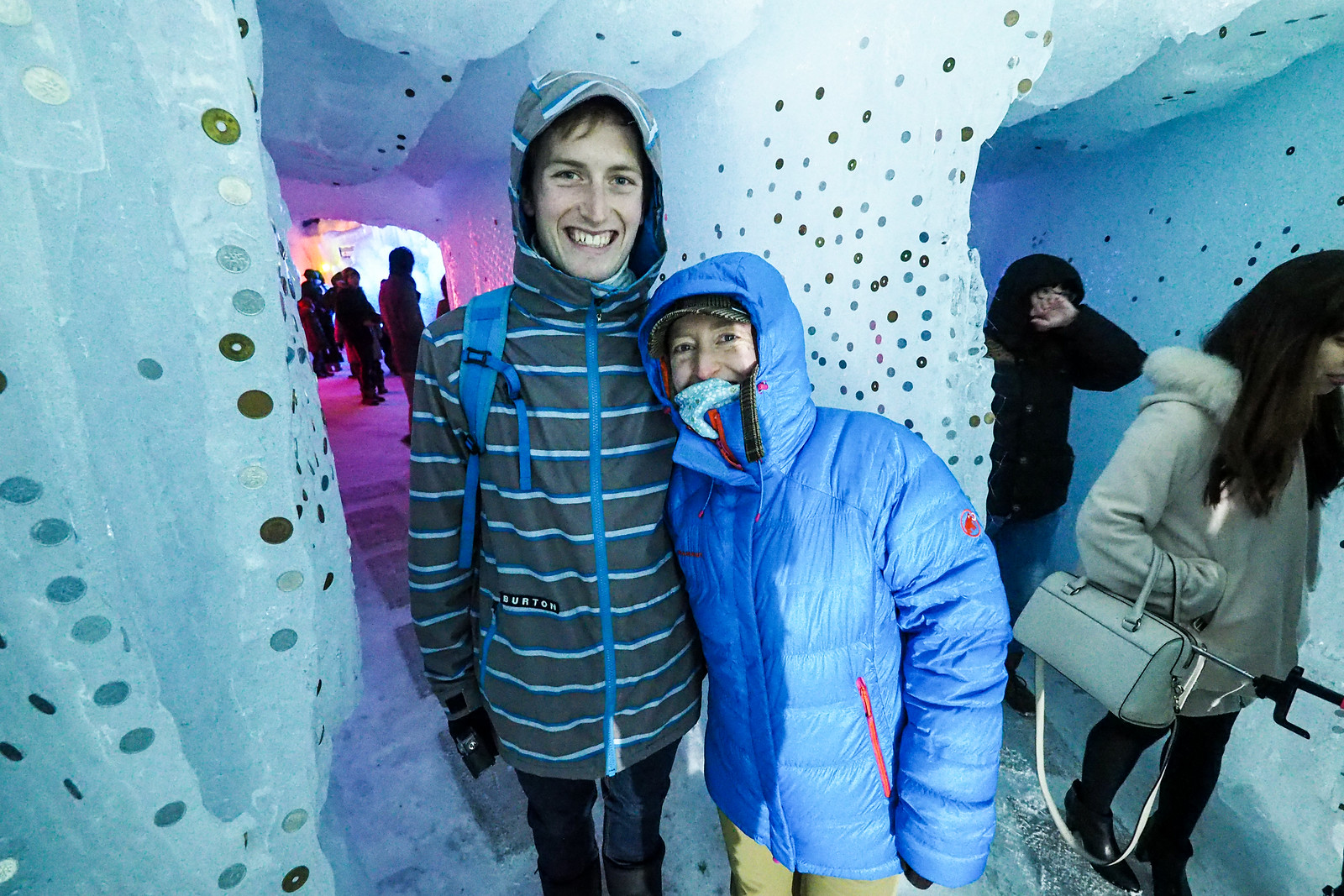 Done this route to Okotanpe-yama, or others nearby? Thinking of doing it? Please post any feedback, reports, or queries here. Thanks!