This year’s Golden Week in Hokkaido was warm. The warmest it has been for 90 years, apparently. This played out in our cycling today; we might as well have been on our annual summer vacation cycle trip. The day started with a chilly morning, however. Multiple layers and a good wind-breaker were required equipment to get breakfast on the go. As always, breakfast was a healthy dose of warm porridge with chopped apples, washed down with some hot coffee. 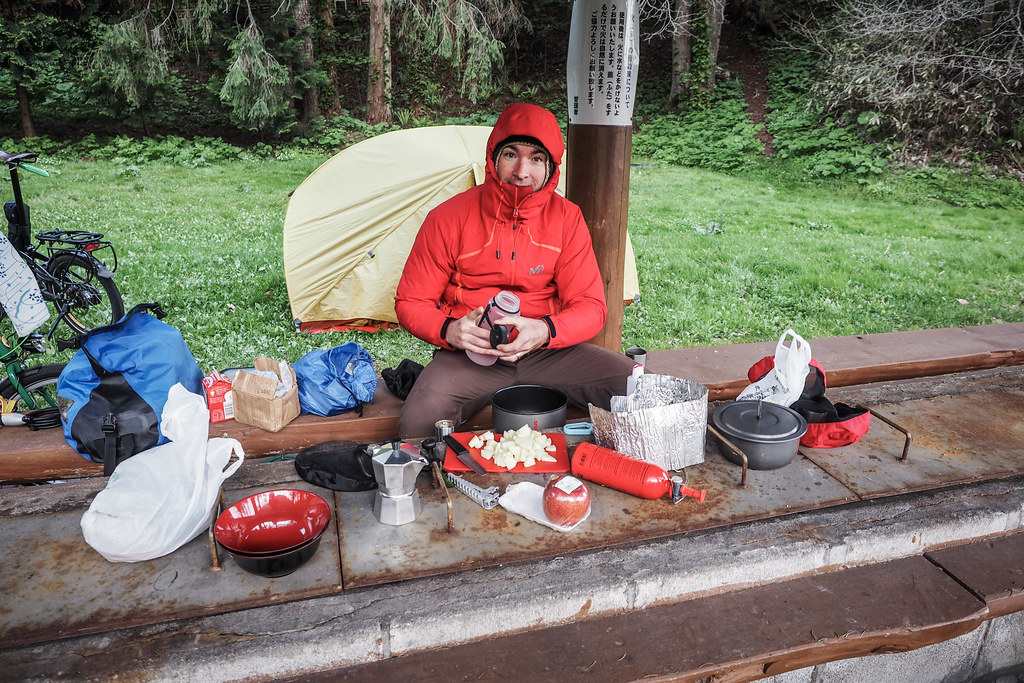 Guiding us on our way were some of Japan’s political election hopefuls. The current opposition leader Okada looked dapper in green (and positively decades younger than he looks in real life), promising straight-ball politics… 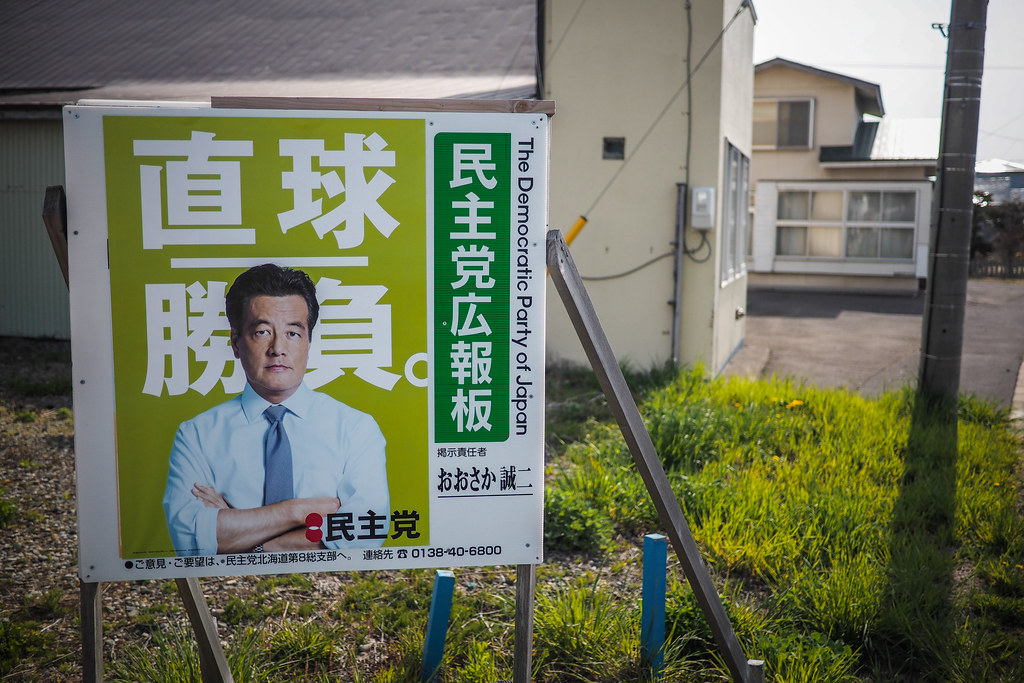 Japan’s current ruling party’s leader Mr. Abe looked a little more determinedly wistful, and we couldn’t quite figure out whether it was really his first at the bottom of the poster or that of someone younger and more smooth-skinned… 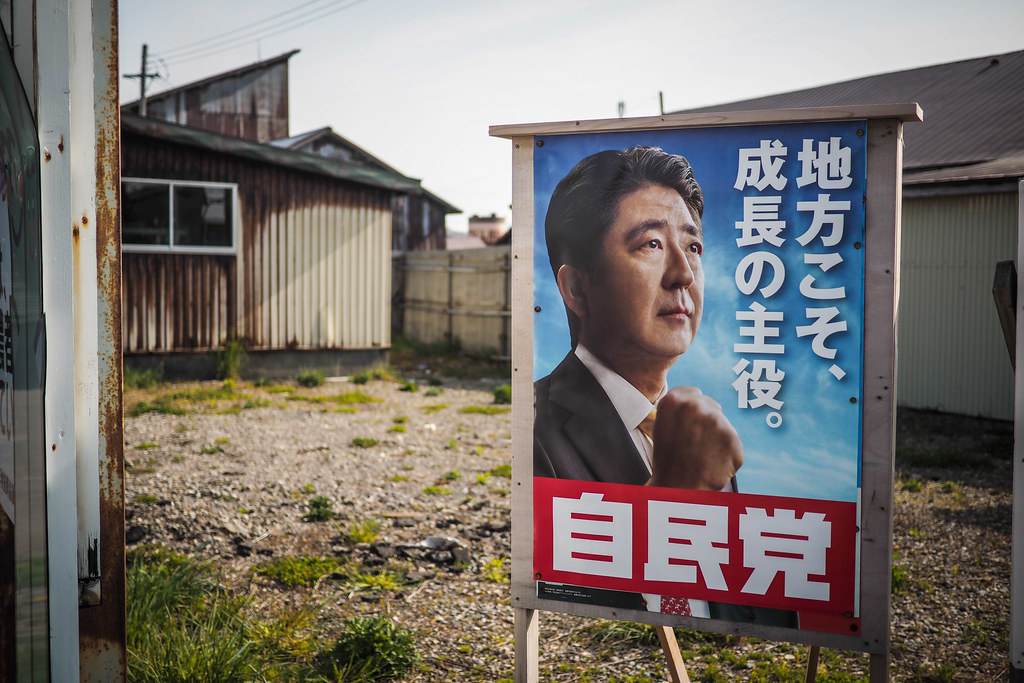 Although to be honest, I thought Mr. Osaka below should run for prime minister. He comes across to me as the benevolent accountant, ready to honestly and humbly steer the country back into the black. I guess it must be the glasses and graying hair… 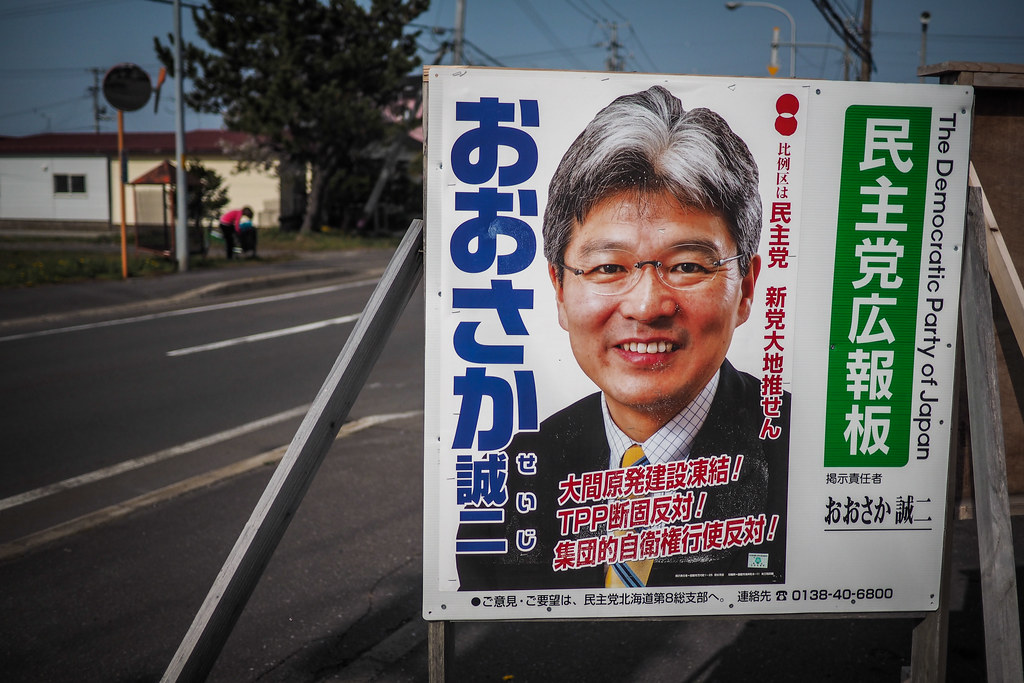 Locals seemed oblivious to the political campaigning. An old man, hunched over, shuffled out of his house as we were stopped on the side of the road. He gave us a cursory glance as he bent down to pick up a stone off the ground. His frail body seemed so stiff that he was teetering on the verge of toppling over. He righted himself again and hurled the stone at a stray cat in the vacant plot next to his house. His missile fell well short of its intended target. The old man sneered at the cat, turned and shuffled back to his house. Mr. Osaka with the glasses and graying hair wasn’t given a second thought.

While Japan springtime is well known for its voluptuous cherry blossoms, sakura, Hokkaido in particular has a less known but arguably more dramatic sakura that blooms around springtime: the shiba-zakura, or the ‘lawn’ sakura. A well-tended plot of land with this specimen bursts into a low covering of deep purples and pinks. 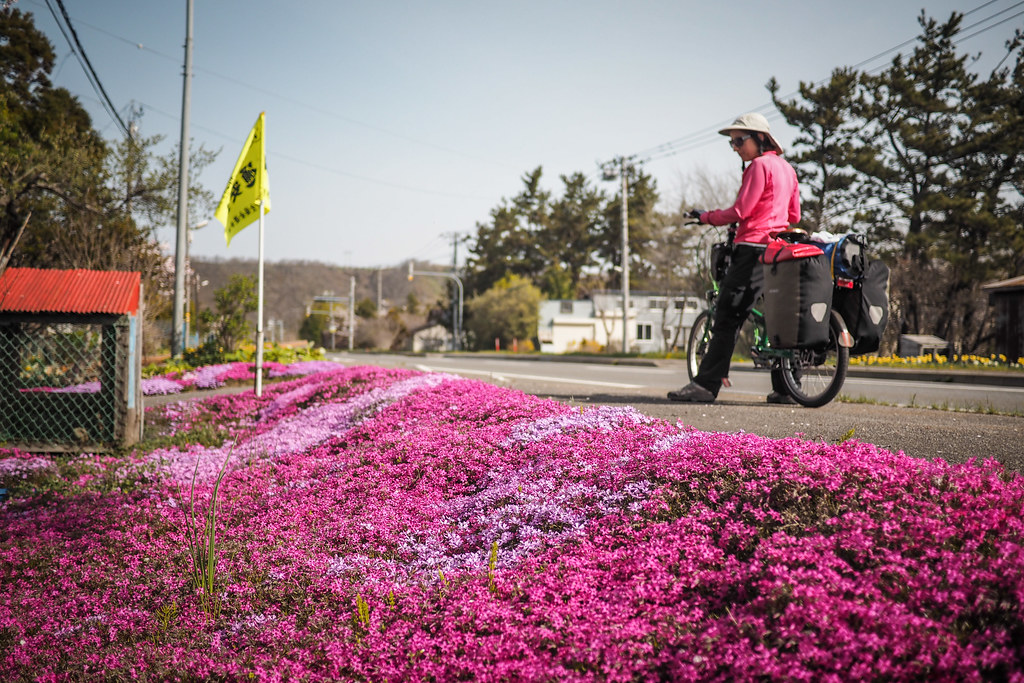 Paired with the more traditional sakura over head, these make for a springtime delight. 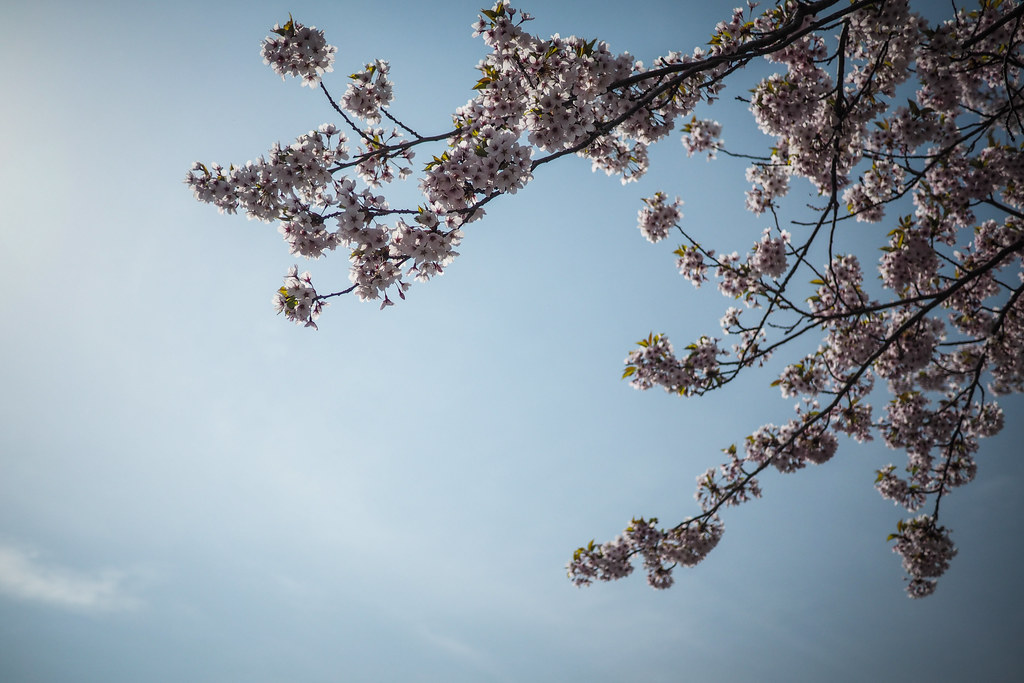 Of course early May is not only about springtime. One of the days that makes up the string of public holidays called Golden Week is Children’s Day. Around this day, many families will fly carp-themed windsocks; the more one ventures into the countryside, the larger and more substantial the carp become. Generally, there will be a large black carp at the top (representing the father of the family), followed by a slightly smaller red or pink carp (representing the mother), followed by different colored carp of decreasing sizes, representing children in the family in order of oldest to youngest. 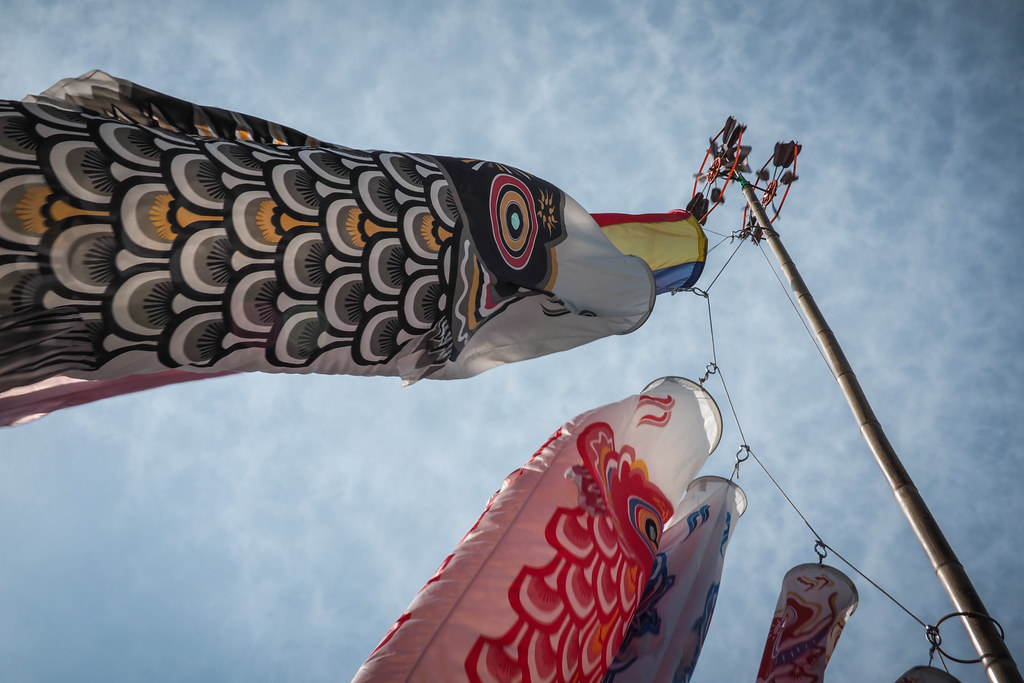 As if to supply us with a constant stream of novelties today, we stumbled upon a guy who has been walking around Japan for the last three years. He’s visited most of the prefectures in the country, and pushes all his belongings around on a large industrial cart. He generally walks on the road where it is smoothest, so we wondered what he does in the seemingly ubiquitous shoulderless tunnels dotted around the country. I admired his tenacity. 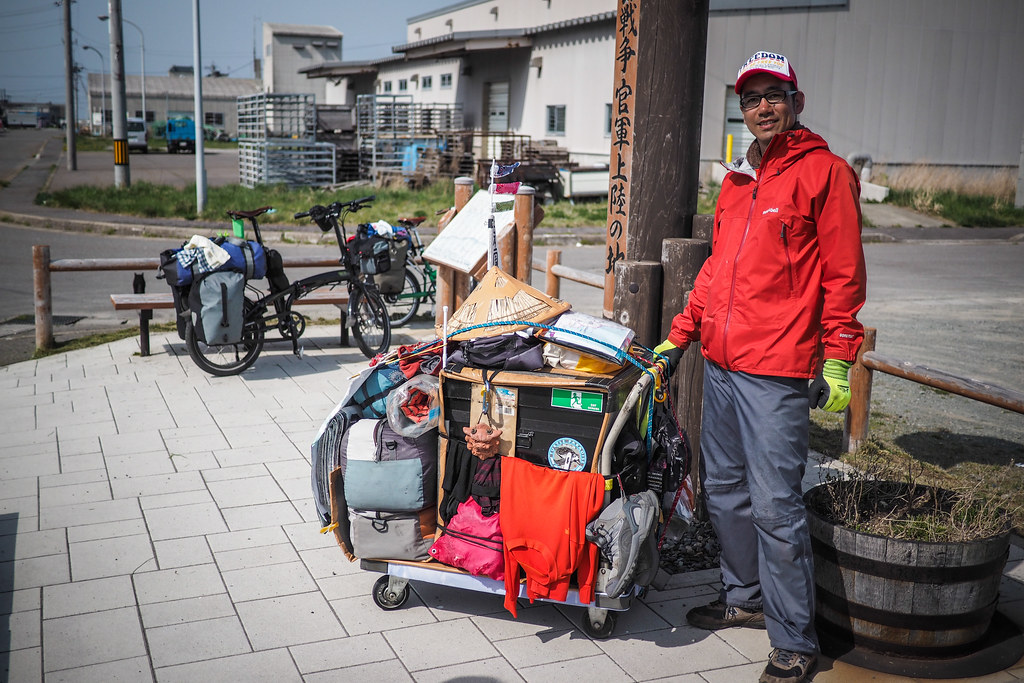 We were now on the Japan Sea coast. Further on in Otobe Town, a prominent rise in the road allowed us expansive views north towards the Kariba mountain range, and across a mostly glassy and crystal clear sea. 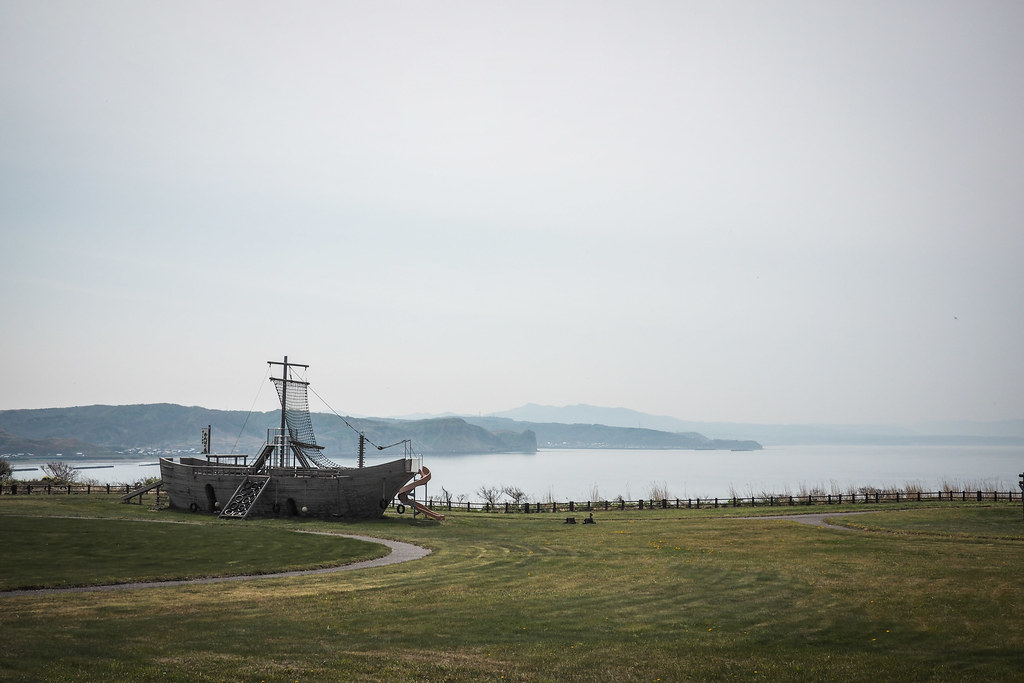 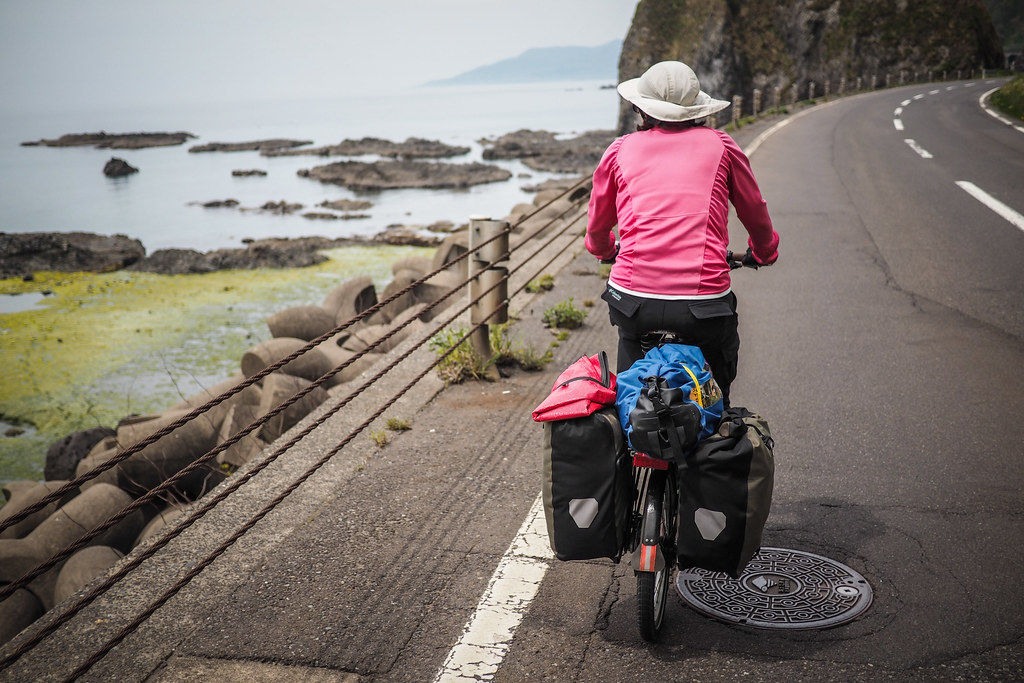 I wasn’t expecting the sea around this area to be so beautifully clear. It would have been a perfect spot for snorkeling or spear-fishing…so long as the wetsuit was thick enough to ward off the cold.

Due to an early 7:30am start in Assabu, we arrived at our destination, the Taisei Campground, at just after 12 noon. At a convenience store earlier on in the day, we had been told that the hotel on the seaward side of the campground had a cafeteria serving meals, so had held off on buying supplies for lunch. Inexplicably, however, despite (or perhaps because of) it being one of the busiest seasons for tourists, the cafeteria was closed. We had to make do with some pieces of fruit, some rice crackers, a croissant, coffee and a protein shake. 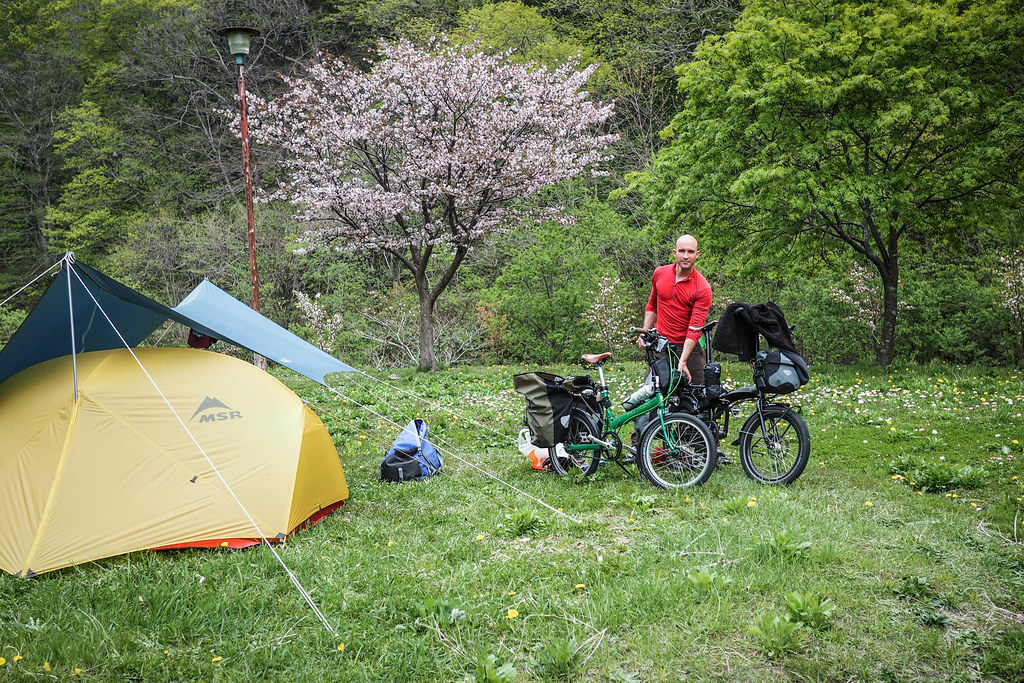 The campsite was cheap enough though: 220yen for each tent pitched, and 220yen per person for entry to the campsite. The campsite came prepared with dandelions and cherry blossoms in full bloom, and to top things off, our German friend Dirk caught up with us as planned, as a third member for the Golden Week ramble. 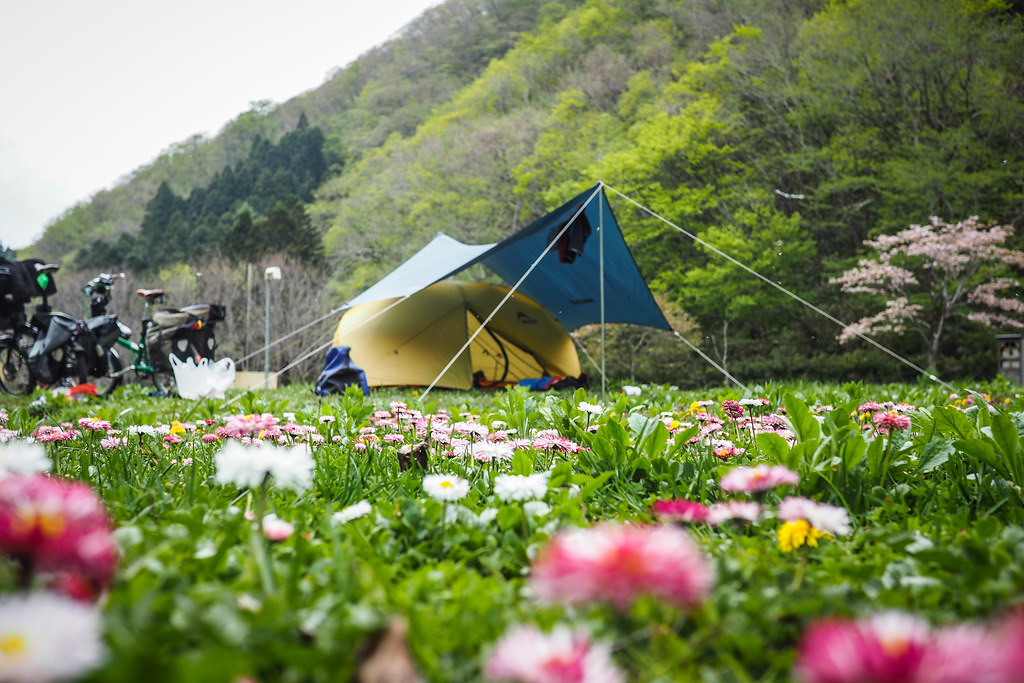 Our favorite campsites are those with hot springs close to the campground. Tonight it was just a short walk down to the hotel for a natural hot spring which included an outdoor bath overlooking the river. However, biting flies were out in force, which made things tricky when trying to relax and take in the scenery, but it was well worth the 400yen entry fee. 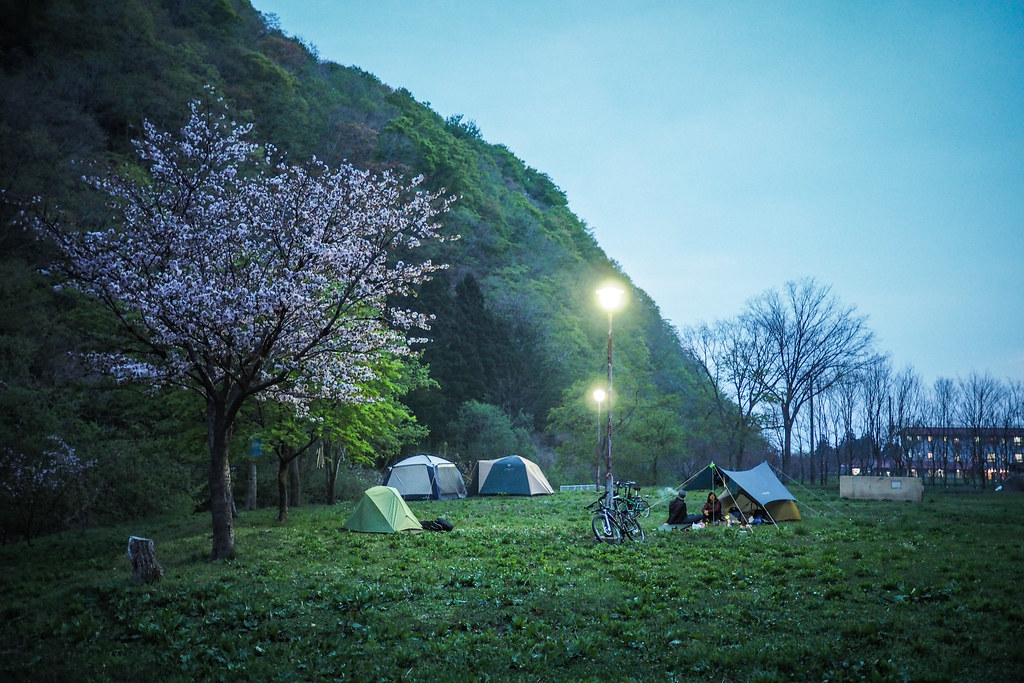